The GOP hides from Iraq

At the party's winter meeting Tony Snow reassured worried Republicans that the president is not in the fetal position. But pep talks couldn't chase the fear that an unpopular war could doom the party in '08. 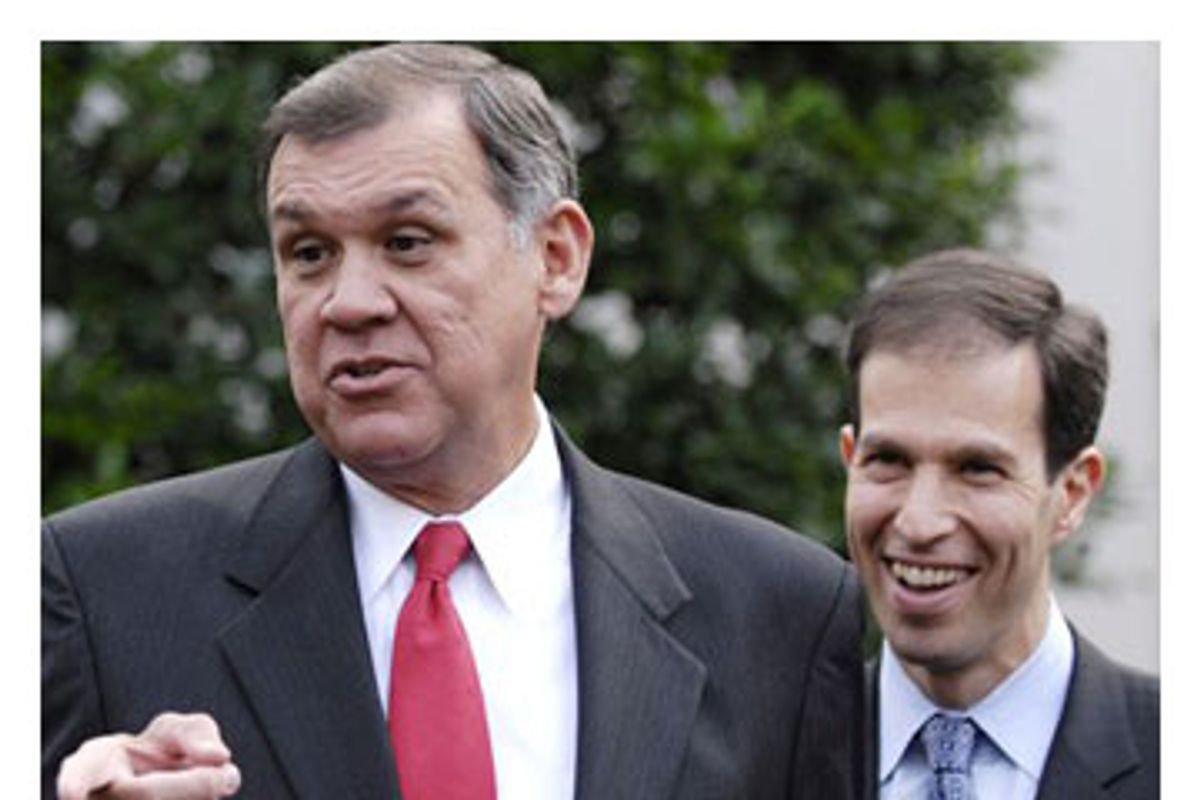 Even the White House's chief spin doctor had to acknowledge the obvious. "I look around right now," said Tony Snow on Saturday morning. "A lot of people are dispirited."

Before him sat several hundred Republican Party officials, committee chairmen and chairwomen and executive directors from all 50 states, who had just endured the three-day winter meeting of the Grand Old Party. Snow had shown up for what he called a "pep talk" over a breakfast of eggs and waffles. He spoke of President Bush as an "aerobic" president and a "force of nature," who stretches his quads during meetings at the Oval Office and whose spirit has not been dimmed by the 2006 elections. But at points, the pep resembled a postmortem. "The election shook up a lot of people, as you know," Snow told the crowd. "The Republican Party does not need to remake itself. It needs to recover its soul."

The last time so many Republican officials had convened in Washington was exactly one year ago. Back then, the GOP had won three national elections in three attempts, the last two times as the party of national security. In early 2006, Iraq was not yet a full-fledged catastrophe, and the faithful could still see themselves on the side of history. "The Republican Party has an agenda to run and win on," White House political advisor Karl Rove told the winter meeting last January. He said President Bush would be known as "one of history's Great Liberators," and teased the Democrats for their "wild and reckless and false charges" about the president's warrantless wiretap program.

Today, the president's plan for victory in Iraq stands at 24 percent in the polls, and the White House has succumbed to Democratic demands for judicial review of wiretaps in the "war on terrorism." The Democrats have regained control of Congress, and a growing chorus of Republican senators has begun to publicly scold the president for his plan in Iraq. As a result, little bravado was displayed this week in Grand Hyatt's convention halls.

In fact, throughout the three-day event, Iraq was a four-letter word rarely spoken from the dais. It was the proverbial elephant in the room that Republicans did not want to see, the biggest single cause of their 2006 defeat and a major concern as they enter the 2008 cycle. But that does not mean the topic of war and its political consequences did not buzz through the hallways. "It's coming out in meetings everywhere and it will come out in the primaries," explained David Keene, the chairman of the American Conservative Union, who was chatting up friends outside the meeting. "Not only do you have the question of whether or not we are wrong in Iraq," he continued. "What is the conservative justification for international involvement?"

Inside the meeting, party functionaries preferred to put the blame for November's rout elsewhere. "It was our lack of new ideas," said House Minority Leader John Boehner of Ohio, in a lunchtime address on Thursday, "that didn't give people a reason to go out and vote for us."

Both Boehner and Senate Minority Leader Mitch McConnell of Kentucky, who spoke Friday, offered very similar sets of recommendations to reclaim the country. Return to the roots on domestic policy: Low taxes, healthcare reform, entitlement reform, energy independence and fiscal discipline. "Recommitting to Reform" was the official theme of the meeting. McConnell mentioned the Iraq war only in passing: "My conference is considering the president's plan to secure Baghdad." Boehner did not directly mention it at all.

On Thursday night, President Bush hosted the state party leaders at a White House reception where he tempered his pleas for patience on Iraq with a promise to continue fundraising for the Republic National Committee until he leaves office. The event was enough to win support for Bush's Iraq plan, said party officials, but several people said the support was tenuous. "I think most in the party will let the White House know that we need to make some dramatic changes if the current effort does not work," said Alberto Cardenas, a former chairman of the Florida Republican Party, who raised more than $100,000 for President Bush in the 2004 cycle. That moment of truth could come as soon as this summer, when the party is set to reconvene for another meeting.

Ken Mehlman, the GOP's outgoing chairman, also failed to mention Iraq in his farewell speech. He spoke instead of rebuilding a bipartisan consensus in the war on terror. "Let's work to put aside our differences on other issues and march together to defeat this common enemy, who threatens our common values -- values that aren't red or blue, but red, white and blue," he told the crowd. Later, as he rode the hotel escalator, Mehlman explained that the Republicans and the president must accomplish two things to regain the support of the American people. First, he said, they must reconnect the war in Iraq to the broader war on terror, which the GOP successfully accomplished in 2004. Second, they must show that the war in Iraq can be won. "Where we have lost ground now is on people who are skeptical hawks," he said. "They are hawks for the war, but they are skeptical of whether their hawkdom will win."

As for the 2008 presidential race, Mehlman said he thought some of the concerns were overblown, and that the 2008 election would be decided on personalities. "I think there are Republicans that are concerned," he said. "But I don't believe the way it manifests itself is heading into '08, a bunch of primary voters in Iowa and New Hampshire say, 'We are not going to win the election because of Iraq, so let's throw Iraq under the train.' I don't think they will vote on that issue."

At the direction of President Bush, Mehlman will be replaced by two men, both of whom will carry the title of party chairman. Mike Duncan, the former general counsel of the party, will oversee the RNC's day-to-day operations. Florida Sen. Mel Martinez, who came to America as a Cuban refugee, will become the public face of the committee, in charge of fundraising, press appearances and coordination with Congress.

Martinez's election signals a clear intent by Republicans to make inroads among the nation's Hispanic voters in 2008. It is also a defensive move against those Republicans who have advocated a far more punitive immigration policy than President Bush supports. Outside the hotel, protesters from Team America, a political action committee founded by anti-immigration activist Rep. Tom Tancredo, R-Colo., held signs that read "Nay to Mel."

"While I don't want to make race an issue, it's really clear that they chose him because he is Hispanic," complained Marcus Epstein, Team America's executive director. Inside the hall, Martinez addressed the significance of his election. "Our party is not a party of racists," Martinez said in a bilingual press conference Friday, after he was elected. "Nuestro partido no es un partido racista."

But less than a year from the first primary, it was Iraq that remained on everyone's mind. After Snow had finished speaking, members of the party's leadership stood up to ask him questions. How would the U.S. deal with the Shiite militia in Baghdad? Do Iraqis still want American troops in Iraq? Snow worked hard to lift the crowd from its doldrums. "Everybody wants a narrative of the president curled up in the corner in the fetal position," Snow said. "One of the things he told us right after the election was, 'I am excited about the next two years.'"

The same cannot exactly be said about the members of the Republican Party's leadership. They are as ready as ever to work hard for a big win in 2008, but they also know that one of the biggest factors in that victory -- the fate of the Iraq war -- is for now out of their control. "It depends how well the president convinces the voters," said Pat Longo, who expected to be elected this month as a committeewoman from Connecticut. "He has to make the sale."