Barack Obama would be the great black hope in the next presidential race -- if he were actually black. 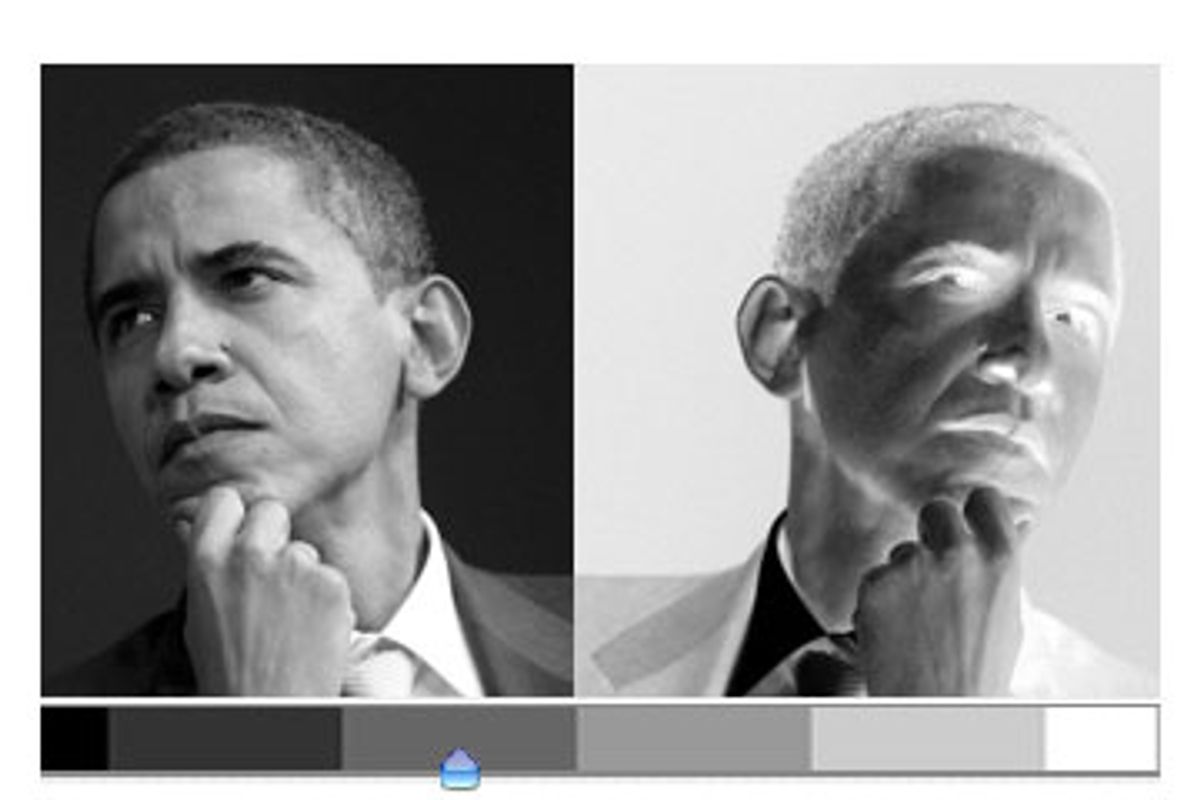 I am confident that I have held out longer than any other pundit to weigh in on both the phenomenon that is Barack Obama and the question of whether race will trump gender as America looks toward election 2008.

I had irritably avoided columnizing on these crucial topics (though I have been quoted by others) for several, somewhat unorthodox, reasons. First, because the Clinton-Obama stand-off has been more than well-covered -- and in an overly simplistic, insubstantial, annoyingly celebritized way. (Horrors, Obama smokes! But isn't he hot in his swim trunks?) I was waiting for the discussion to get serious and, at last, it has. Finally, we're asking the tough questions; instead of just crowing that he's raised $20 million, we're starting to wonder where it came from and what will be asked for in return for that much sugar. Why is the supposedly eco-friendly New Age senator supporting coal, however liquefied, as a way to wean ourselves off foreign oil? Wouldn't be his home state's powerful coal lobby, would it? And then there's his support for ethanol, which, strangely enough, comes mainly from corn-rich Iowa -- site of the first presidential caucus, if I'm not mistaken. All much more important than why he doesn't wear a tie.

I had also held off from writing about Obama because the tsunami of attention and adulation this son of a Kenyan goat herder has had to navigate is just too much, too soon. One would think learning to be a senator might keep a person occupied for a while. My hopes for Obama are as high as anyone else's, but what person so young in public life could survive being shot from the planet's biggest cannon at this velocity? And what, exactly, qualifies him to be the most powerful man in the world? Hopefully, he will mature into a truly viable leader, but I'm of the camp that says he isn't quite soup yet. Joining me in that camp are black elected officials and powerful ministers and others closely allied (i.e., receiving Democratic money and position through years of loyalty and activism); sexy Obama might be, but officials like majority whip Jim Clyburn and others who came up through the Democratic ranks won't quickly allow an upstart to upset the apple cart of allegiances won, favors traded and known quantities like Hillary Clinton and John Edwards.

It's good, it's great, that Obama toiled in the state and local vineyards of Illinois before winning a U.S. Senate seat. God spare us another narcissist millionaire buying his way into office from nowhere but his offshore accounts. Not only did Obama learn that his calling was true, but he also learned the tedious minutiae of governing, legislating and wending one's way through the thicket of interest-group politics on a small but crucial scale. These are important dues that any good politician should pay. Now, he's ready to apply those lessons learned to the massive scale of national politics, but we're not giving him the time to do that.

I cringed as the entreaties for him to run for the presidency became impossible to ignore; intoxicating as it must be to see that office offered on a silver platter, what are four or eight years to a newbie 45-year-old? A lifetime, seemingly. But in reality, they're all that might save him from being crushed under the wheels of a brakeless bus abandoned by the clamoring throngs once the newness of respecting a black guy wears off.

In part, this is why those in the civil rights machine are putting the brakes on Obama-mania and feigning objectivity when it comes to his candidacy. Surely they're worried that the early jabs being aimed at superstar Obama (his admitted past drug use, the quibbles about the possible Frey-ing of his autobiography, his dastardly smoking, and the importance of his Muslim background) might grow in significance; race schmace, no way they're willing to go down with the brother if skeletons pop out of the closet. And either way, they win; they can force themselves on him as mentors/gatekeepers or stand aside while he goes down in ignominy, tut-tutting speeches at the ready for a man they knew better than to embrace simply because of his race.

Without a doubt, though, the Reverends Jackson and Sharpton's main reason for giving him the faux high hat is a determination to potty-train the upstart, flex their own muscles, and ensure that there will remain a place for them at the power broker's table. Perhaps most important, they're no doubt waiting for his reverse Sister Souljah moment. Just as the Negro-friendly Bill Clinton had to gamble on retaining that base while reassuring whites that he knew how to keep blacks in line, so Obama has to reassure blacks he is unafraid to tell whites things that whites decidedly do not want to hear. Never having been "black for a living" with protest politics or any form of racial oppositionality, he'll need to assure the black powers that be that he won't dis the politics of blackness (and, hence, them), however much he might keep it on mute. He didn't attain power through traditional black channels (not a minister, no time at the NAACP) so, technically, he owes the civil rights lobby nothing, but they need him in their debt. Homie has some rings to kiss and a kente-cloth pocket square to buy. Still, the overtures he needs to make are purely symbolic; he's irresistible, and the black bourgeoisie won't be able to keep their hands off him. For all his bluster, even Jackson recently admitted to CNN that "all of my heart leans toward Barack." The black embrace is Obama's to lose.

Also, and more subtly, when the handsome Obama doesn't look eastern (versus western) African, he looks like his white mother; not so subliminally, that's partially why whites can embrace him but blacks fear that one day he'll go Tiger Woods on us and get all race transcendent (he might well have never been in the running without a traditionally black spouse and kids). Notwithstanding their silence on the subject, blacks at the top are aware (and possibly troubled?) by Obama's lottery winnings: "black" but not black. Not descended from West African slaves brought to America, he steps into the benefits of black progress (like Harvard Law School) without having borne any of the burden, and he gives the white folks plausible deniability of their unwillingness to embrace blacks in public life. None of Obama's doing, of course, but nonetheless a niggling sort of freebie for which he'll have to do some groveling.

Which brings me to the main reason I delayed writing about Obama. For me, it was a trick question in a game I refused to play. Since the issue was always framed as a battle between gender and race (read: non-whiteness -- the question is moot when all the players are white), I didn't have the heart (or the stomach) to point out the obvious: Obama isn't black.

"Black," in our political and social reality, means those descended from West African slaves. Voluntary immigrants of African descent (even those descended from West Indian slaves) are just that, voluntary immigrants of African descent with markedly different outlooks on the role of race in their lives and in politics. At a minimum, it can't be assumed that a Nigerian cabdriver and a third-generation Harlemite have more in common than the fact a cop won't bother to make the distinction. They're both "black" as a matter of skin color and DNA, but only the Harlemite, for better or worse, is politically and culturally black, as we use the term.

We know a great deal about black people. We know next to nothing about immigrants of African descent (woe be unto blacks when the latter groups find their voice and start saying all kinds of things we don't want said). That rank-and-file black voters might not bother to make this distinction as long as Obama acts black and does us proud makes them no less complicit in this shell game we're playing because everybody wins. (For all the hoopla over Obama, though, most blacks still support Sen. Clinton, with her long relationships in the community and the spillover from President Clinton's wide popularity.)

Whites, on the other hand, are engaged in a paroxysm of self-congratulation; he's the equivalent of Stephen Colbert's "black friend." Swooning over nice, safe Obama means you aren't a racist. I honestly can't look without feeling pity, and indeed mercy, at whites' need for absolution. For all our sakes, it seemed (again) best not to point out the obvious: You're not embracing a black man, a descendant of slaves. You're replacing the black man with an immigrant of recent African descent of whom you can approve without feeling either guilty or frightened. If he were Ronald Washington from Detroit, even with the same résumé, he wouldn't be getting this kind of love. Washington would have to earn it, not just show promise of it, and even then whites would remain wary.

I'll go so far as to say that a white woman will be the Democratic nominee for president before a black descendant of American slaves. Even if Obama invokes slavery and Jim Crow, he does so as one who stands outside, one who emotes but still merely informs. One who can be respectfully tolerated because there's a limit to how far he can go in invoking history. He signals to whites that the racial turmoil and stalemate of the last generation are past and that with him comes a new day in politics when whites needn't hold back for fear of being thought racist.

To say that Obama isn't black is merely to say that, by virtue of his white American mom and his Kenyan dad who abandoned both him and America, he is an American of African immigrant extraction. It is also to point out the continuing significance of the slave experience to the white American psyche; it's not we who can't get over it. It's you. Lumping us all together (which blacks also do from sloppiness and ignorance, and as a way to dominate the race issue and to force immigrants of African descent to subordinate their preferences to ours) erases the significance of slavery and continuing racism while giving the appearance of progress. Though actually, it is a kind of progress. And that's why I break my silence: Obama, with his non-black ass, is doing us all a favor.

Since he had no part in our racial history, he is free of it. And once he's opened the door to even an awkward embrace of candidates of color for the highest offices, the door will stay open. A side door, but an open door. Yet until Obama survives the scourging he's about to receive from Hillary Clinton (God help him if he really did lie about his Muslim background) and the electoral process, no candidate of color will ever be taken seriously. Clinton isn't about to leave the stage in the name of racial progress, and the pundit class has only just begun to take apart the senator's record, associates and bank accounts. Still, this is progress. A non-black on the down low about his non-blackness is about to get what blacks have always asked for: to be judged on his merits. So let's all just pretend that we've really overcome.