The first day of the Libby trial continues with an opening statement from the defense. 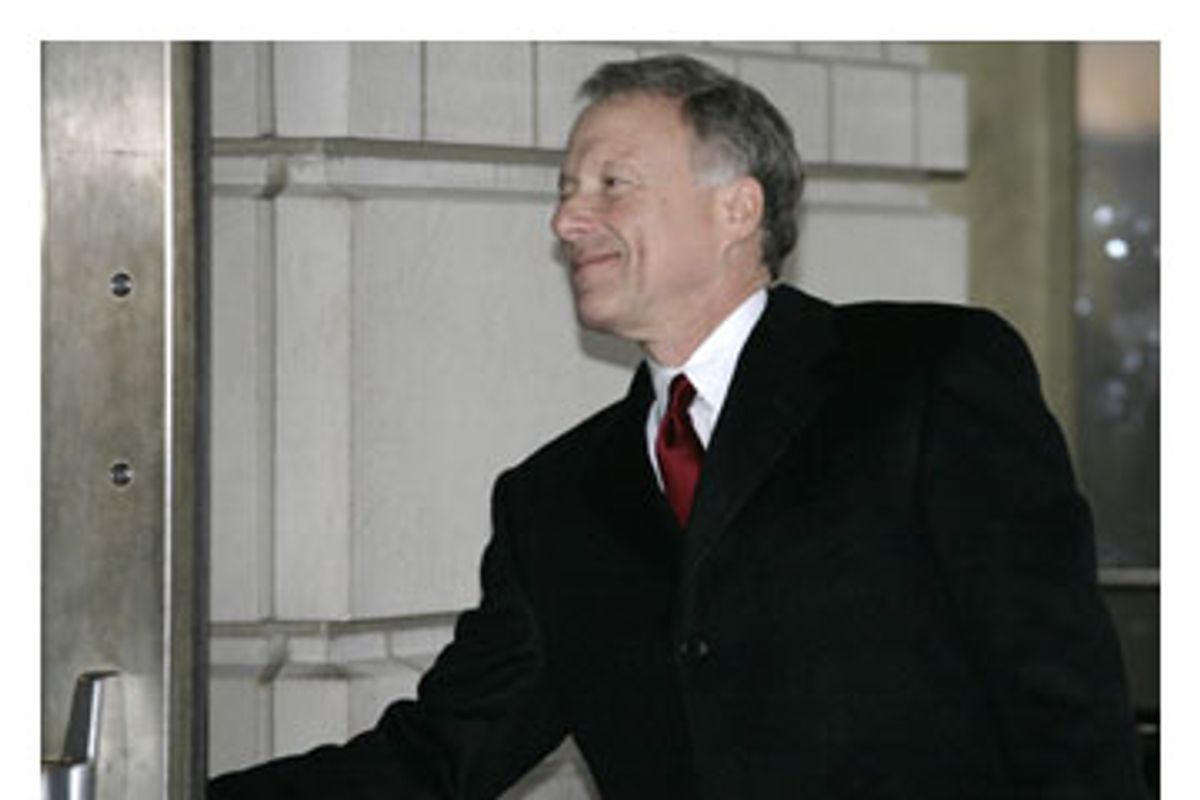 The Libby trial is in recess as I write this, while everyone takes an hourlong break for lunch. When the trial resumes, Libby's attorney, Ted Wells, will continue his opening statement.

Wells has presented quite a different picture to the jury than prosecutor Patrick Fitzgerald did earlier, not just as far as the facts of the case but also in his very demeanor. Where Fitzgerald did his best to come off as the picture of calm, the dispassionate prosecutor simply laying out the facts of a miscarriage of justice caused by Libby, Wells has been, well, not angry, but righteously indignant. From the first sentence of his statement, Wells presented himself as baffled as to how anyone could think Libby would ever lie and angry that such a paper-thin case would actually be brought to trial.

In Wells' narrative, it is Libby who is the victim, not just of a prosecutor who brought a circumstantial case with "no witnesses" who will testify that Libby told them he lied and "no scientific evidence" to prove that Libby lied, but of the White House itself. Responding to Fitzgerald's allegations that, because of the statements of former White House press secretary Scott McClellan, Libby was concerned that his job was in jeopardy, Wells told the jury, "You will find that Mr. Libby was not concerned about losing his job in the Bush administration ... He was concerned about being set up, concerned about being the scapegoat." Wells portrayed Libby as the victim of a struggle between "the White House" -- that is, the president's staff -- and the Office of the Vice President. And it was here that Wells' indignation reached its highest point, and it seemed as if this defense team, which during jury selection did its best to minimize the presence of administration critics on the jury, was now playing up to sentiment against the administration and specifically Deputy Chief of Staff Karl Rove.

In Wells' telling, Libby went to Dick Cheney to voice his concerns about what he saw as an attempt to push him under the bus and thus protect Rove. "The vice president made a note of what Mr. Libby said in private to the vice president," Wells said. "The note shows Mr. Libby telling the vice president, 'I did not leak any classified information, I was not involved in the leak to Karl Rove'" -- it was at this point that Wells excused and corrected himself, noting that the leak was to Robert Novak -- "'I had nothing to do with the leak to Mr. Novak.'" Wells then said there was one sentence of Cheney's note that summed up what was going on:

"Not going to protect one staffer + sacrifice the guy that was asked to stick his neck in the meat grinder because of the incompetence of others."

Libby's defense also focuses on the issue of his memory, especially his memory of events as he was simultaneously involved in the crush of his normal work -- it's this defense that an Op-Ed in the New York Times today called "the 'Honey, I was too busy preparing the family tax return to think clearly when you asked about the lap dancers' defense.'" More on that as Wells resumes his statement.