Unlike past presidents dealing with the consequences of war, Bush has walled himself off from the public and the Congress it elected. 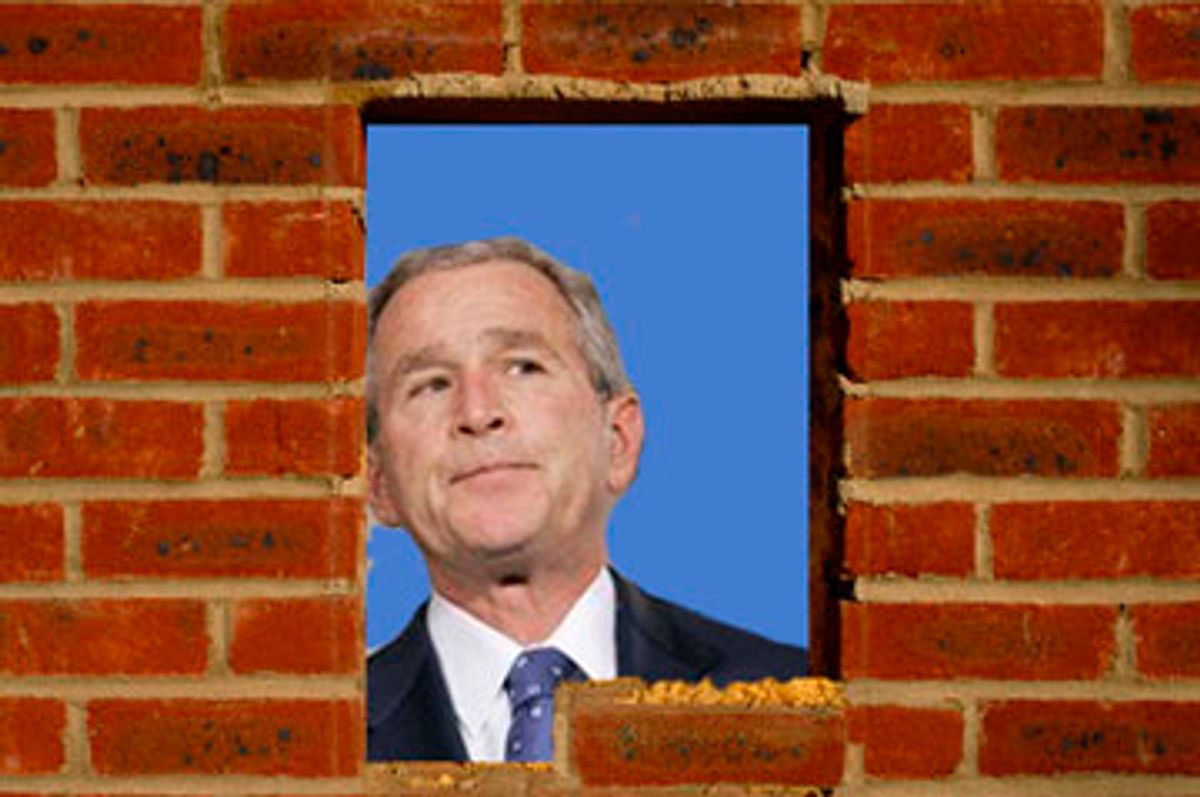 When the hopelessly prodigal son mounts the podium to deliver his sixth State of the Union address, seated behind him will be the parents he never had: the good mother, caring yet demanding responsibility, and the bad father, granting license for misadventure. As he evades and rebuffs Speaker of the House Nancy Pelosi, President Bush clings to Vice President Dick Cheney as his permissive authority figure.

On Monday, the day before his speech, Bush descended to "the weakest point of his presidency, facing deep public dissatisfaction over his Iraq war policies and eroding confidence in his leadership," the Washington Post reported, referring to the ABC News/Washington Post poll that disclosed Bush as the most unpopular president since Richard Nixon on the eve of his resignation.

In the face of such dire political prospects, Bush has decided that public opinion is no longer a factor that concerns him. Every other president coping with the hazards of war, from Lincoln to Nixon, strained to manage public support. At a similar stage in the Nixon presidency, Nixon was drunk, speaking to the portraits on the White House walls, and forcing Henry Kissinger to pray with him on his knees. With the public hardening and broadening its opposition to his policy, Bush has simply cut himself off from its opinion. He has abandoned caring what the country thinks, except in his imagined end of the story, where he is the victor. For now, he will escalate as he pleases, blessed by Cheney.

"Have you read about Lyndon Johnson in Vietnam? Do you draw any lessons from that?" a reporter from USA Today asked the president in an interview published Monday. In response Bush telescoped the entire tragic history of the Vietnam War and Johnson's agonies into slogans, slurring Johnson's patriotism in order to create a contrast with his own. "Yes, win," he replied. "Win, when you're in a battle for the security ... if it has to do with the security of your country, you win."

Johnson, indeed, worried that if he failed to commit militarily in Vietnam or that if that commitment faltered, he and the Democratic Party would be smeared as soft on communism. He operated in the shadow of fear of the recrudescence of McCarthyism. Bush's casual distortion of history and defaming of Johnson's motives only prove Johnson's political perspicacity about the incorrigible mentality of the right wing, if not his actions.

In another interview a week earlier, on Jan. 14, on CBS's "60 Minutes," Bush repelled any suggestion of responsibility for error in his Iraq policy. He located the lack of public support in the United States in the insufficient thanks offered by the Iraqis. "Do you think you owe the Iraqi people an apology for not doing a better job?" asked correspondent Scott Pelley. "That we didn't do a better job or they didn't do a better job?" replied the president. "Well, that the United States did not do a better job in providing security after the invasion." "Not at all," said Bush. "I am proud of the efforts we did. We liberated that country from a tyrant. I think the Iraqi people owe the American people a huge debt of gratitude, and I believe most Iraqis express that. I mean the people understand that we've endured great sacrifice to help them. That's the problem here in America. They wonder whether or not there is a gratitude level that's significant enough in Iraq." Two days later, Gianni Magazzeni, the chief of the United Nations assistance mission for Iraq, declared that 34,452 Iraqi civilians had been killed and 36,685 wounded in 2006.

As Bush's popularity continued to plummet, Cheney appeared on Jan. 14 on Fox News to wave away the polls. Drawing on his experience in three previous trouble-plagued Republican administrations -- Nixon's, Gerald Ford's and elder Bush's -- he stated categorically, "I've seen embattled administrations, and this isn't one of them." Hence, by virtue of the power vested in him as wise man in residence, there is no reason to pay further attention to an ungrateful public or the Congress it has just elected.

On the podium, as Bush confronts his first Democratic Congress, the state of the parties could not be more sharply divergent. In a little more than the two weeks since the new Congress was sworn in, Pelosi has commandingly dispelled nearly every stereotype about the Democrats that was propagated in the campaigns against them while they were out of power. Banging her gavel so decisively that she has literally dented the lectern, she directed the passage of the Democratic program as promised: increasing the minimum wage, extending stem cell research, permitting government bargaining on Medicare drug prices, cutting student loan costs, enacting the recommendations of the 9/11 Commission, and closing oil company tax loopholes. She also overrode one old bull, John Dingell, chairman of the Commerce and Energy Committee, from Michigan, close to the automobile industry, to create a new committee devoted to global warming. Pelosi's house is in order.

The Republican Party, disoriented by defeat, its leadership unable to whip its troops into line without the incentives of entrenched power, and crushed by Bush's unpopularity, has turned into a scene from bedlam. Having just suffered loss of Congress, Republicans awake to the prospect of further fatalities in 2008. At least 30 Republican members of the House are contemplating retirement, according to the Washington Post. In the 2006 wipeout, 34 Republicans clung to their seats by winning less than 55 percent, making them prime targets in the next cycle.

On the Senate side, Republicans hold 21 of the 33 seats up, many of them vulnerable. One, Wayne Allard of Colorado, announced his retirement last week. Sen. Gordon Smith of Oregon has called Bush's "surge" in Iraq "absurd," adding, "It may even be criminal." Sen. Chuck Hagel of Nebraska, who is rumored to be thinking of retiring, called Bush's policy "Alice in Wonderland." Another Republican facing reelection, Sen. Norm Coleman of Minnesota, said, "I just don't believe this makes sense," adding that he would "stand against" Bush's Iraq policy. On Monday, Sen. John Warner of Virginia, the ranking Republican on the Armed Forces Committee, introduced a resolution opposing Bush's "surge" (co-sponsored by Coleman and Republican Sen. Susan Collins of Maine). "I personally, speaking for myself, have great concern about the American GI being thrust into that situation, the origins of which sometimes go back over a thousand years," Warner said. When Republicans in Congress see Bush they are staring into the abyss.

Bush's failure is tainting his party even more than Nixon tarred the Republicans. The Democratic victories in 1974 were in retrospect a momentary swing of the pendulum in reaction to Watergate, but not the basis of a lasting realignment. The Republican era, which surfaced first in 1966, was temporarily set back, but not reversed. Nixon, after all, had won 49 states in 1972. After Jimmy Carter's interregnum, Ronald Reagan resumed where Nixon had left off, with a conservative vengeance.

Iraq may bear similarities to Vietnam as a march of folly. But George W. Bush is no Lyndon Johnson, who was fully conscious and anguished at the disaster unfolding. Unlike Johnson, who listened to the counsel of his secretary of defense, Clark Clifford, who urged him to sue for peace, Bush has disdained Clifford's latter-day counterpart, former Secretary of State James A. Baker.

Oblivious to realities in Iraq, Bush is also increasingly oblivious to political realities at home. Herbert Hoover, acclaimed as the most talented and skillful man of his time, was incapable of rising above his narrow perspectives in the face of the Depression, and his stubborn limitations marked his party for two generations. Bush views his State of the Union speech as another occasion for declaring what he will do regardless of what anyone thinks (with Cheney's approval). His intention is not to report on the state of the Union. It is to express his state of indifference to the Union.