Why my friend Scooter Libby is loyal to Bush, Cheney and an arrogant administration whose values are not his own. 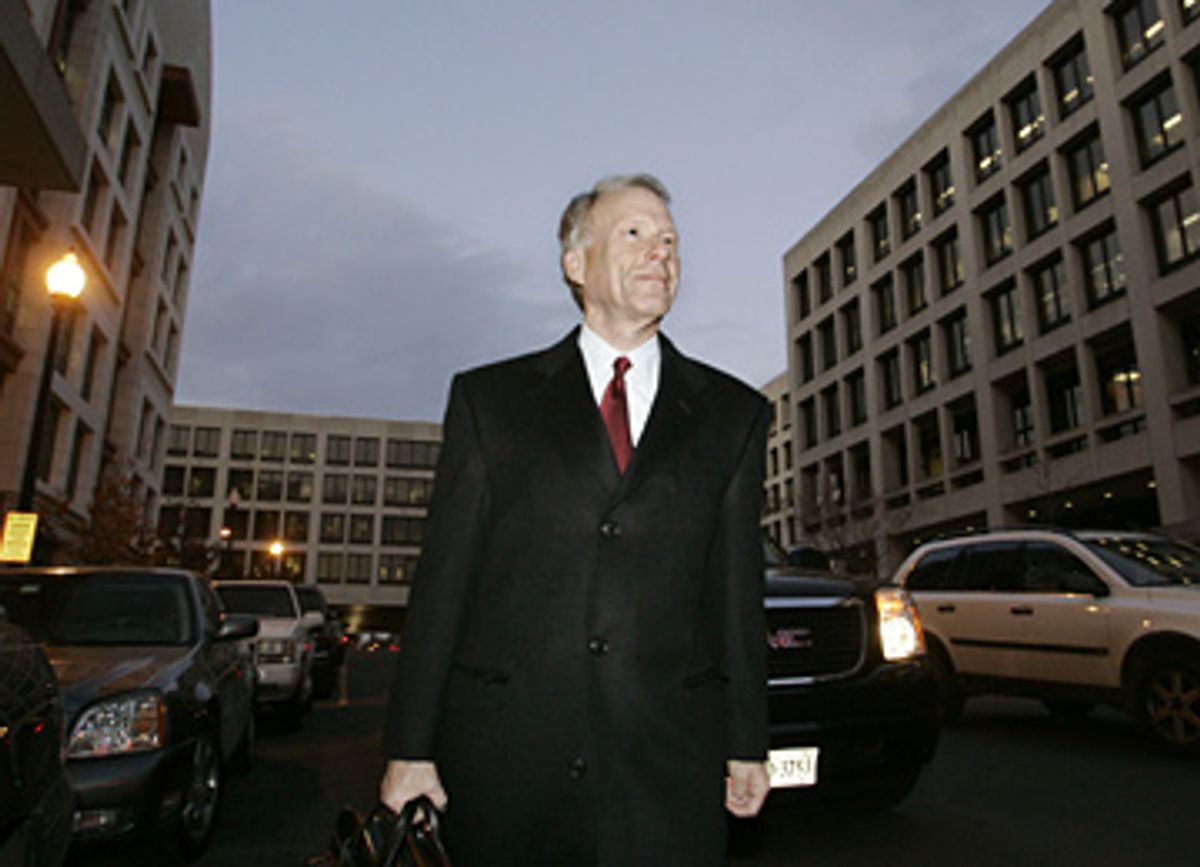 As someone who's an old friend of Scooter Libby's and at the same time a frustrated critic of the Bush administration, I find I can see Scooter's trial in just one way. What we are witnessing here again is an old drama of ambitious innocence foundering in and probably drowned by a world much more wicked than it ever knew. To be sure, Shakespeare would not have penned a plot that hinges on the hero's claim that he simply "forgot." But this is an American tragedy, after all. The backdrop here is not the steeps of Mount Parnassus or the gorges below Delphi. It's the Washington Beltway, clogged with SUVs and littered with half-eaten Whoppers and Big Macs.

Until yesterday, the riddle that preoccupied the press was the apparent "paradox" of Scooter Libby. Some pundits wondered how a first-rate legal mind could have forgotten such crucial details of his professional life or told such clumsy lies. Others wondered how a "buttoned-down lawyer" could wear a cowboy hat and drink tequila. And still others wondered how such a canny operator could be persuaded to fall on his sword to protect his superiors.

Now we have something new to wonder about: Was Scooter really a "scapegoat" used to protect Karl Rove, as his attorney alleges? Or is this just a strategy Scooter's lawyers have devised to portray a shrewd insider as a victim of palace intrigue?

Just below the surface of all these ruminations on Scooter's character lies the question that has tortured me for the past six years. I've known Scooter since we were both 11-year-old "new boys" at a boarding school in New England. Later we were roommates, co-captains of the debating team, and later still we both went to Andover. We had the same teachers, read the same books, and played hundreds of hours of touch football together. We were close friends, drawn to each other not just by shared interests but by a shared position on the cruel status ladder of these elite prep schools. In a world dominated by rich WASP jocks, we were both too small to play varsity sports. Scooter was a Jew. I was a scholarship boy whose family never owned a new car.

To me, the puzzle of Scooter Libby is not that he's a highly paid lawyer who likes to drink shots of tequila now and then. Nor is it the question of whether he was betrayed by his superiors. The deep mystery to me is that for years Scooter somehow managed to reconcile who he is with what his masters and mentors demanded of him. Easygoing, tolerant, humane, balanced, modest and witty, he is precisely everything that the Bush administration is not.

So, I ask: How could Scooter work enthusiastically for politicians who enflame and profit from anti-gay hysteria, when he is not himself a homophobe? How could he work untiringly for politicians who denied the fact of global warming, when he himself respects science? How could he pledge fealty to men allied with the Christian right, when he himself is secular and rational? (If his local public school started mandating the teaching of creationism alongside evolution, Scooter would certainly yank his kids out and send them off to Andover.) In short, how could someone like him work for the likes of George W. Bush and Dick Cheney?

The simple answer often given is "naked ambition," but that obscures what's most mysterious and compelling about this case. After all, if Scooter had been content with the standard American dream of power and wealth, he could have spent his life making millions very safely for a corporate law firm.

To understand Scooter Libby, we have to think about the particular form of his ambition. And to perceive that, we have to look at the peculiar education Scooter and I received at New England prep schools in the 1960s.

At Eaglebrook and then at Andover, Scooter was always a model citizen. He got excellent grades, and he participated enthusiastically in all aspects of school life. He cared whether the school teams won or lost, and he developed close, even sycophantic relationships with the teachers we had -- including teachers who had about half his IQ. I remember being especially puzzled by Scooter's high regard for one "master" (that's what prep-school teachers were called back then) -- a classic football-coach type who drilled us in marching and taught us how to salute the flag smartly. Most of the other boys in our little clique called him "Dumbo," but not Scooter. Scooter flattered him, and joked with him, and seemed genuinely to respect him.

It would be an understatement to say that there was not the faintest trace of Holden Caulfield in Scooter's makeup. Nor the slightest speck of Huckleberry Finn. At our first school, Scooter casually courted the older "prefects" -- boys designated school "leaders" but really just cogs in the school's machinery of discipline -- and eventually became a prefect himself. In our senior year he comfortably took his place on the prestigious Church Committee, where his duties consisted of passing the collection plate every Sunday morning at the Congregational church in the nearby village.

As Scooter's friend, I was always puzzled by how he managed to reconcile his exceptional intelligence with an unquestioning allegiance to these schools' absurd values and hypocritical institutions. Perhaps as a Jewish boy, Scooter simply felt more pressure than I did to submit to the system in which we were placed. This system has been well described by Robert D. Dean in "Imperial Brotherhood: Gender and the Making of Cold War Foreign Policy":

"Boys were taken from their homes and families in early adolescence and sent off to remote rural schools ... One object of such an extreme solution to the problem of child rearing was to strip away a boy's personal identity and replace it with an understanding that 'the collective identity of the group must take precedence over individual identities.'"

There is much truth to this account, but it still doesn't explain the Scooter I knew, who always held fast to his individual identity. At Andover in 1968, most of the boys in our set railed against the war in Vietnam. But in truth our opposition was as much a pose as a conviction; we knew that it was not just right but cool to be against the war, already sensing that more girls would say yes to boys who said no. But as far as I know, Scooter never succumbed to this fashion. Already beginning to understand himself as a misfit among his generation, he wittily and intelligently held his own in countless arguments against us.

Scooter turned out to be wrong about the war, of course, but he was right about something just as important. Scooter already understood that his own route to power would be to respect power and work for it. While many of his classmates stumbled off the path their education prepared them for -- taking to the woods to become carpenters or to universities to become professors -- Scooter stayed the course and wound up working in the White House.

For all these reasons, I want to insist that Scooter's respect for power is not just a front for cold self-interest. At bottom, there's a kind of innocence about Scooter. He has submitted to masters like Paul Wolfowitz and Cheney because he respects them, just as a Zen novitiate submits to a meditation master or a young violinist reveres the prodigious talent of her teacher. This attitude was zealously nurtured by the prep schools we attended, where conformity to power was called "leadership" and submission to the system understood as "success." And it is Scooter's celebration of this attitude -- not the sex scenes unfairly ridiculed by the New Yorker -- that makes his novel "The Apprentice" so interesting today. The book tells the story of a young man just like Scooter, a man with the humility to bow before a master warrior and undertake a life of apprenticeship to figures mightier than himself.

The tragedy of Scooter's situation now is thus an old one. Like so many other innocent apprentices -- from Goethe's Faust to James' Isabel Archer -- he now finds himself way out of his depth. Always the model student without a single demerit to blot his report card, he suddenly finds himself an accused felon. While the men who benefited from his desire to serve them are still at their desks and phones across the Potomac River, Scooter is looking in the mirror, knotting his tie, and preparing himself for another day in court. It's understandable that he would regard himself as a victim of his superiors. He is one. But it's also telling that the villain his lawyers point toward is Karl Rove, not the master himself, Dick Cheney. Betrayed or not, Scooter's loyalty endures.

And yet, I would be a kind of innocent myself to conclude that the tragedy here is only Scooter's. His radical innocence, which his mentors so adroitly managed, also marks the Bush administration itself. Arrogantly dismissing the advice of seasoned Middle East experts, Bush has pursued a policy designed by men who never set foot in the region, never walked through a souk, never spoke a word of Arabic. Today, all these men, not just Scooter, have been carried out of their depth. Today, all of them are looking in the mirror every morning. What do they see?

Probably nothing that disturbs them, I'm afraid, since nothing about them would stand out in a crowd. Their bland features reveal only a characteristically American innocence, as typical as it is dangerous and powerful. This is why it's not just Scooter, nor just Bush and Cheney, but the nation that elected them that is symbolically on trial here this month.