Despite his prattle about cutting the deficit, a grudging nod to global climate change, and yet another plea for backup on his Iraq plan, Bush's presidency entered its final phase on life support. 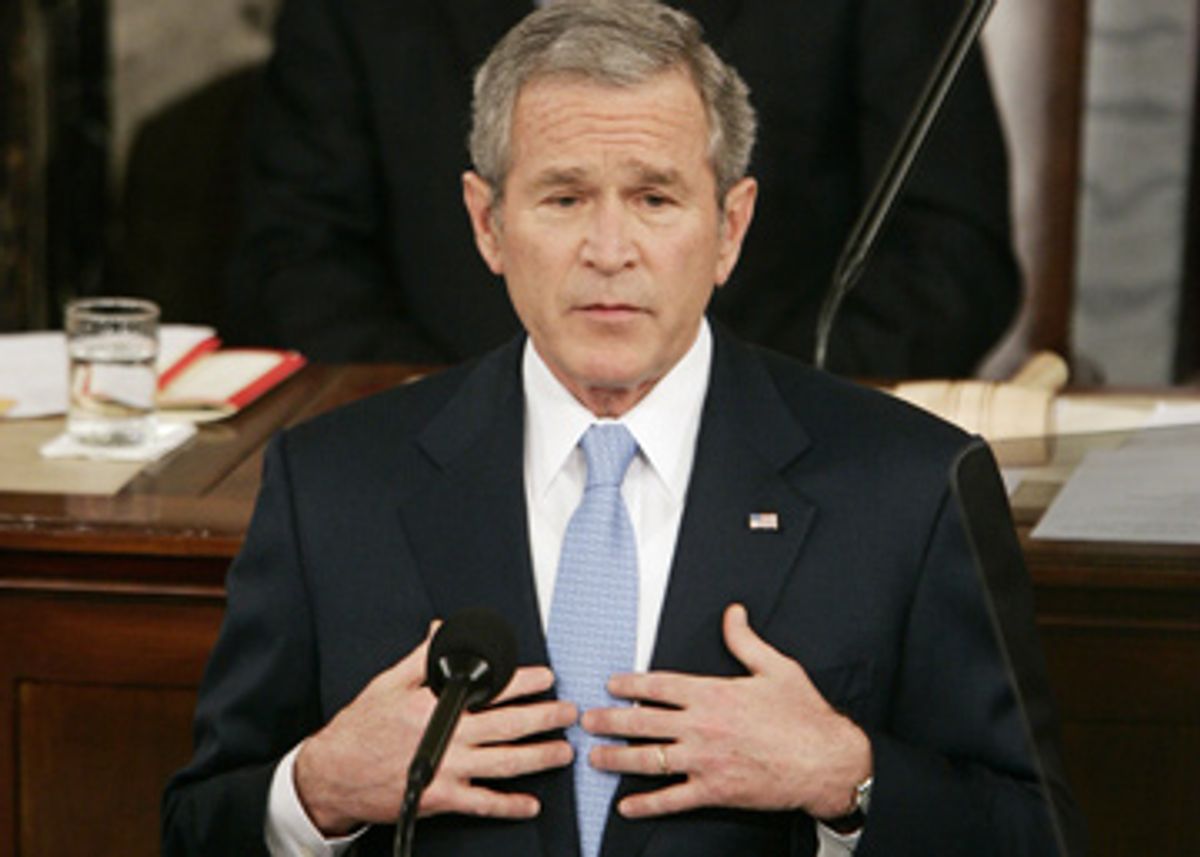 Imagine if the Constitution required George W. Bush to report to Congress annually on the state of the presidency, rather than the nation. There could be only one word to describe Bush's current condition: "dire," the same adjective that Lt. Gen. David Petraeus employed Tuesday morning to characterize the military situation in Iraq.

Ever since Woodrow Wilson created the modern tradition of oral State of the Union addresses, by appearing before Congress in 1913, few presidents (maybe only Herbert Hoover in 1932 and Richard Nixon in 1974) have embarked on this rhetorical task with such dismal prospects for political salvation. It would take both victory in Iraq and a free Prius for every family to rescue a president whose approval ratings -- 28 percent in the latest CBS News poll -- have sunk lower than the number of voters who want to send more troops to Iraq (29 percent in the same survey).

As bad as things are for Bush right now, at least he can claim, as Lyndon Johnson did at the height of Vietnam, "I'm the only president you've got." At the State of the Union a year from now -- just days after the 2008 Iowa caucuses -- the Republican Party will be well on its way to nominating a new presidential candidate, and Bush will truly be a portrait of irrelevancy.

Against this backdrop, how do you judge Tuesday night's address? That is, beyond the obvious lasting visual imagery of a woman, House Speaker Nancy Pelosi, proudly sitting behind the president in the chair once reserved for the likes of Denny Hastert.

Bush did get through the speech without the palpable sitting-on-a-window-ledge-high-above-traffic despondency of his Iraq speech less than two weeks ago. He managed to utter six epic words -- "the serious challenge of global climate change" -- without doing anything to call attention to his dramatic, if grudging, reversal on the environment. There was also a new front in presidential cynicism as the president belatedly denounced special-interest legislative "earmarks" -- just as the Democrats had taken control of Congress.

Maybe the most provocative rhetorical moment came when Bush claimed that all legislators in both parties who voted for the Iraq war were complicit in its outcome, saying, "We went into this largely united -- in our assumptions, and in our convictions." But even if once pro-war Democrats would disagree, Bush pleaded, "You did not vote for failure. Our country is pursuing a new strategy in Iraq -- and I ask you to give it a chance to work."

But even though Bush offered an intriguing, if flawed, healthcare plan and an ambitious, but exceedingly vague, commitment to alternative fuels, it is difficult to take the president's legislative gambits seriously. Bush is no more likely to be taken seriously as a legislator than he is as the would-be monarch of Mesopotamia.

What we are witnessing is the downside of the stability built into the American political system -- the inability of a four-year presidential administration to fall of its own weight. If this were a parliamentary system, all it would take would be a no-confidence vote in Congress to bring on a new presidential election. And probably even a significant minority of Republicans would support such a heave-ho motion. But instead -- keeping in mind that incompetence is not an impeachable offense -- we are saddled with Bush and Dick Cheney for another two years. Which raises the grave issue of whether a president -- armed with his formidable constitutional powers -- can function without the support of Congress, two-thirds of the voters and a growing number of senior members (Virginia Sen. John Warner is a prime example) of his own party.

Bush gambled the last vestiges of the prestige of his position on his prime-time address on Iraq on Jan. 10 -- and, as a result of that bum bet, the croupier took all the president's chips off the board. Even popular presidents (Bill Clinton, Ronald Reagan) risked wearing out their welcome if they preempted evening television time twice in a single month. So it was surprising that Bush returned to the well-trod turf of Iraq and terrorism for almost half the State of the Union address, especially with all the White House pre-speech emphasis on the president's reinvigorated domestic agenda. It was almost as if Bush wanted a do-over on his Iraq speech, somehow believing that if he mouthed the familiar platitudes one more time ("This war is more than a clash of arms -- it is a decisive ideological struggle and the security of our nation hangs in the balance"), he could miraculously turn the tide of public opinion.

While the president is likely to get little legislative satisfaction from the new Democratic Congress, it was still unfortunate that he rushed through his new domestic proposals at breakneck speed, since probably few viewers at home understood their intricacies.

In an effort to reduce the number of Americans without health insurance (47 million), the president proposed a complicated gambit that would limit the tax breaks for those enrolled in comprehensive employer-paid programs. This back-door tax increase -- yes, a tax increase -- would apply mostly to upper-income Americans and those in traditional union programs, which is why many Democrats immediately trumpeted their objections. The administration estimates, perhaps optimistically, that the Rube-Goldberg-style trade-offs in its plan would provide 5 million more Americans with healthcare coverage without adding to the budget deficit. Not a panacea by a long shot, but a far more constructive notion than the usual fare from the Bush White House.

Environmentalists may have been surprised to hear Bush talk about reducing gasoline usage by 20 percent by 2017. But here the devil is in the details. Most of the savings would come by mandating that 15 percent of all automobile fuel at the pump be derived from alternative sources like ethanol. Yes, the president is embracing the heavy hand of government regulation. The problem is that there is not currently nearly enough of a supply of these alternative fuels, and there is no way of realistically predicting their price in 2017. Which is why a fact sheet provided by the White House offers this SUV-size escape clause: "The EPA Administrator and the Secretaries of Agriculture and Energy will have authority to waive or modify the standard if they deem necessary."

But for all the president's proud prattle about "cutting the deficit in half," Bush's lasting domestic legacy will be a red-ink presidency. On the same day that Bush -- a president who has never vetoed a congressional spending bill -- preached "fiscal discipline," David Walker, the comptroller general, appeared before Congress to describe the nation's financial future. "Simply put," Walker said bluntly, "our nation is on an imprudent and unsustainable fiscal path."

Getting caught up in these policy details risks treating Bush like a normal president, a leader whose words have weight on Capitol Hill. But there is nothing normal about a second-term president whose popularity is slipping dangerously close to Barry Bonds levels. Bush is more than a lame duck; he is akin to an aquatic bird carried around on a stretcher. Maybe the most memorable aspect of the 2007 State of the Union address is simply that Bush survived it.