He built a hospital -- and he can dunk!

Bush preferred talking about Dikembe Mutombo and Wesley Autrey to discussing the real state of the union. 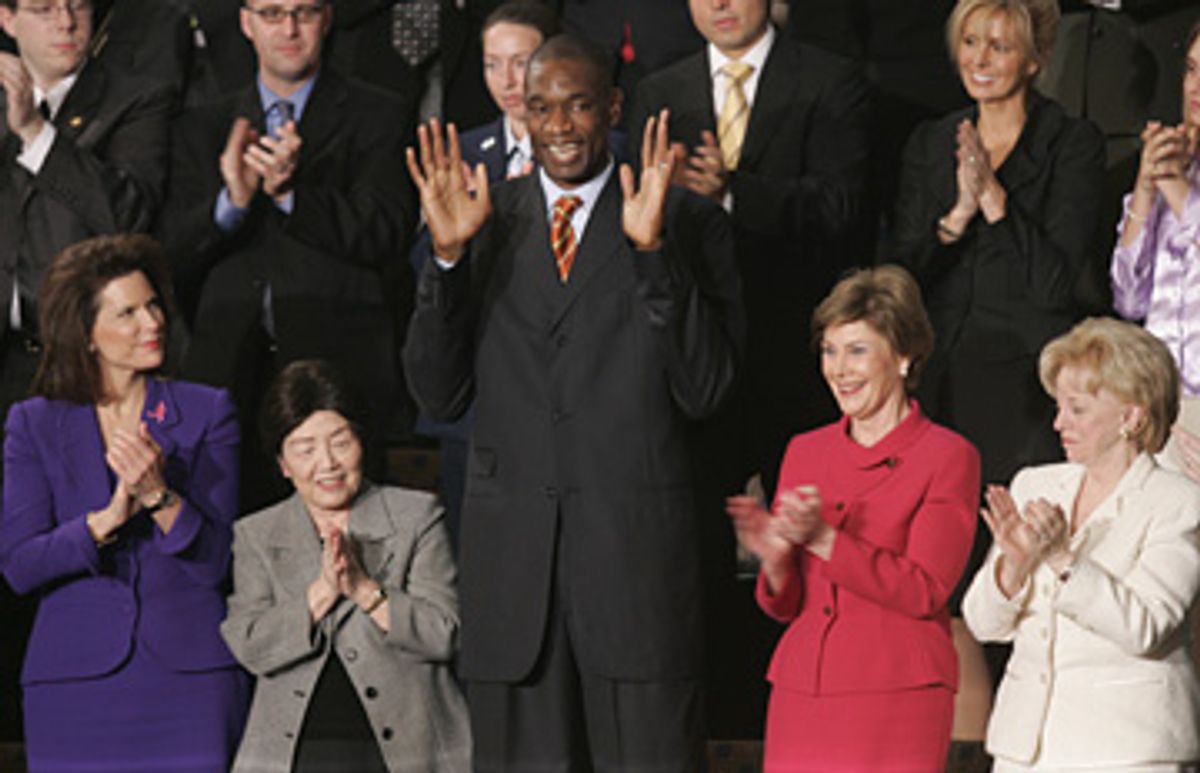 Sometimes the nation needs a Hallmark card, a balm to soothe its pain, an inspirational anecdote to get it through the night. On Tuesday in the United States Capitol, with the president, the Congress, the Supreme Court and the Joint Chiefs looking on, that card took the form of a 7-foot-2 basketball player named Dikembe Mutombo Mpolondo Mukamba Jean Jacque Wamutombo.

He sat in the gallery, snug between first lady Laura Bush and Dr. Nancy Ho, a cellulosic ethanol geneticist. By the time President Bush got around to praising Mutombo for building a hospital in his native Congo, the hard parts of his sixth State of the Union were already over. Bush had plowed through the traditional list of policy objectives that never seem to get accomplished -- energy independence, earmark reform, balancing the federal budget and saving Social Security. He had introduced his token novel idea, a tax deduction for healthcare costs. He had reminded the nation of the trauma of Sept. 11, 2001. He had even, ploddingly, restated his justification for increasing the number of troops in Iraq.

By almost any measure, the proceedings had been subdued, free of the usual number of overlong standing ovations and red-meat applause lines. A White House spokesman had compared the speech to a "drawer full of diamonds," but it seemed more like a basket of potatoes. There was none of the furious patriotism of Bush's 2002 address or the militaristic optimism of the 2003 address. The president was working under siege. He read two-thirds of the speech before mentioning the war in Iraq, the subject on everybody's mind. At key points, like when he discussed 4,000 additional Marines he was sending to Iraq to chase al-Qaida, only about half of the Republican caucus stood to applaud. "I thought it seemed very businesslike," explained Sen. Sam Brownback, R-Kan., after the event had ended. Even the new chairman of the Republican Party, Sen. Mel Martinez, R-Fla., offered a tepid review. "I thought it was a decently good night," he said.

But there Mutombo sat in the gallery. And the president's speechwriters exploited the opportunity, employing a four-time NBA Defensive Player of the Year as his escape hatch, pointing away from the reality of the nation's situation to the glory of its ideals. "The greatest strength we have is the heroic kindness, courage and self-sacrifice of the American people," Bush said, before turning to the basketball player who built a hospital. "We are proud to call this son of the Congo a citizen of the United States of America." The applause was unanimous and people began to smile.

The president had a good thing going, so he did not stop there. "Three weeks ago, Wesley Autrey was waiting at a Harlem subway station with his two little girls, when he saw a man fall into the path of a train," he continued. Autrey, as everyone now knows, saved the man's life with a split-second decision. "There is something wonderful about a country that produces a brave and humble man like Wesley Autrey," Bush concluded, as the applause erupted again, and Autrey stood from his seat to give the president a thumbs up.

At present, roughly one in three Americans approves of the way President Bush is doing his job, a number so low that it has been beaten in recent decades only by Richard Nixon during Watergate and Harry Truman during the Korean War. So the president had employed a magician's hand, distracting attention from himself to the greatness of the country he leads. In the same spirit, he had paused before his address to praise House Speaker Nancy Pelosi for becoming the first woman to hold her post.

In times like these, with a newly divided government and an unhappy country, the State of the Union was less a vehicle of substance than a spectacle of appearances. Sen. Joseph Lieberman, I-Conn., kept a noticeably healthy distance from Bush as he walked the aisle, avoiding a repeat of the nearly career-ending cheek-kiss he had shared with the president last year. Potential presidential candidates carefully calibrated when they would stand for applause. When Bush said of Iraq, "Let's turn events toward victory," Sen. John Kerry, D-Mass., turned for approval to Ron Wyden, D-Ore., before deciding to stand and clap. When Bush said that nothing was more important than succeeding in Iraq, presidential contender Hillary Clinton, D-N.Y., rose from her seat to applaud, but her rival Sen. Barack Obama stayed in his chair.

On the House floor Tuesday morning, Rep. Yvette Clarke, a freshman Democrat from Brooklyn, N.Y., had told her colleagues, "The State of the Union is that we are on edge." By tradition, President Bush stuck with an old standard Tuesday night. "The state of our union is strong," he said. But Clarke's description was still echoing through the hall. On this night, the strength of the union sat in the gallery, a basketball player and a subway hero. The president of the United States stood before the country on the knife edge of history.