It's nice the talking heads have discovered Jim Webb, but why do they think Democrats have to be men to be courageous? 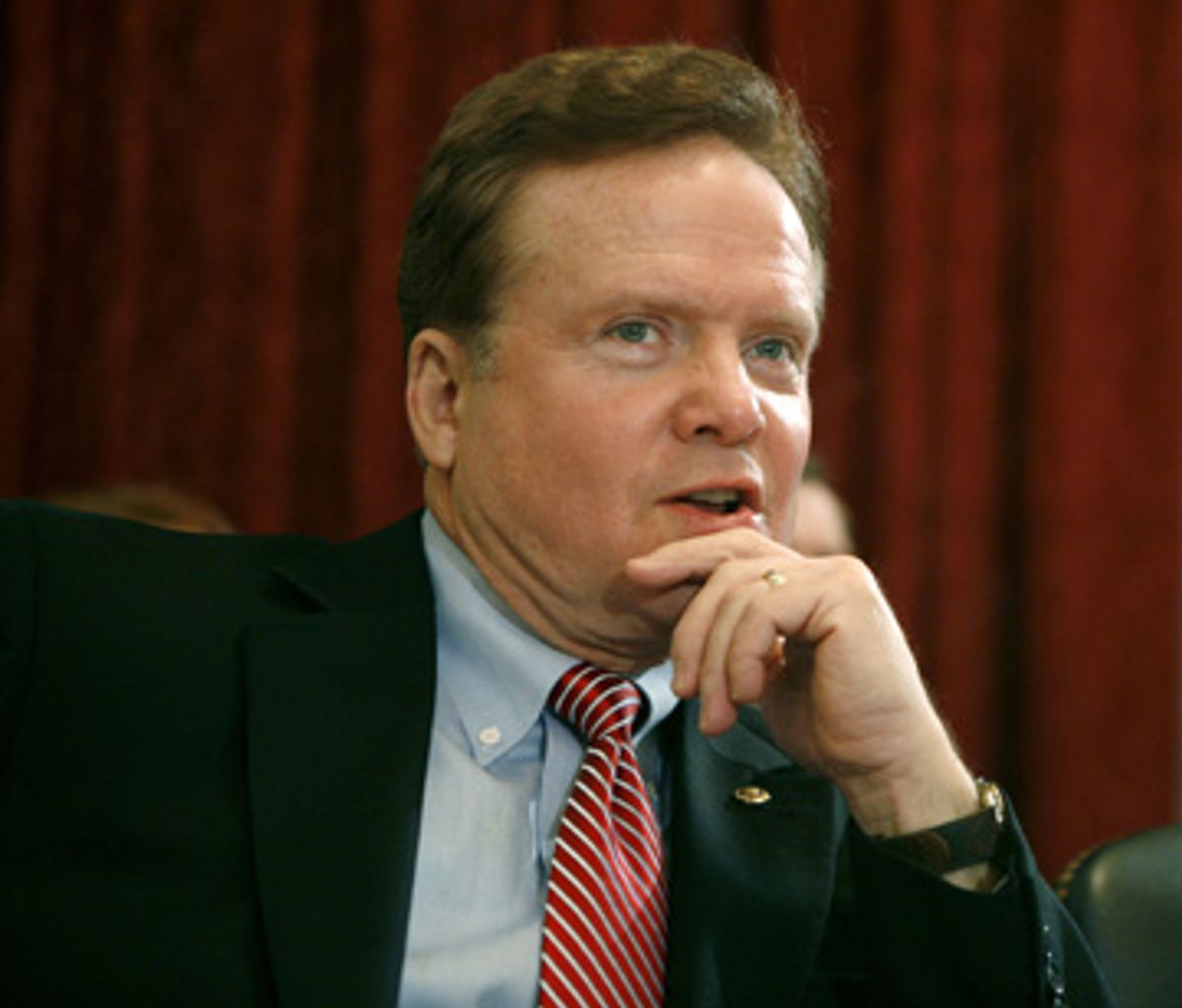 Virginia Sen. Jim Webb became a national Democratic leader Tuesday night when he jumped out of the television and into American living rooms with a searing indictment of the way President Bush "recklessly" went to war. He wore his family's tradition of military service lightly, but used it to remind everyone of the hawkish Republican leaders -- Bush, Cheney, Rumsfeld -- who themselves never went to war. He hissed the word "recklessly" with a simmering, dignified anger.

"[Bush] disregarded warnings from the national security advisor during the first Gulf War, the chief of staff of the Army, two former commanding generals of the Central Command, whose jurisdiction includes Iraq, the director of operations on the Joint Chiefs of Staff, and many, many others with great integrity and long experience in national security affairs," Webb told the country. "We are now, as a nation, held hostage to the predictable -- and predicted -- disarray that has followed." Webb said he hoped Bush would chart a way out of the war, but if he didn't, Democrats "will be showing him the way."

In fact Democrats showed the country a new way Tuesday night -- a new way for party leaders to handle Bush, a new way to lead the nation with passion, dignity and steely resolve. House Speaker Nancy Pelosi set the tone, graciously accepting the president's warm tribute -- and then using her hour on camera behind him remarkably well, clapping, standing and, occasionally, very effectively, sitting silently while Republicans stood, as the president tried to win back a skeptical country and Congress.

Then, after the speech, on various news shows, Democratic presidential front-runners Hillary Clinton, Barack Obama and John Edwards represented the party admirably, each of them striking a balance between respecting the bipartisan ritual of the evening -- yes, we want to get some work done and we'll act like the president does too -- while making clear they would continue to fight Bush hard on Iraq. Webb was the night's standout, but his performance was also a tribute to the new and frankly unfamiliar P.R. savvy of Democratic leaders, who were smart enough to choose the military veteran to rebut the president.

Or so I thought. It turned out that on television, there was a zero-sum game of political credit for Democrats, so Webb's win meant that others lost -- and mainly that seemed to mean liberals and women, especially liberal women like Nancy Pelosi. On MSNBC, Chris Matthews and Mike Barnicle were tripping over themselves to laud the manly Webb, and thank their lucky stars that the Dems hadn't picked somebody who'd have used his or her time to fulminate over gay marriage or other effete concerns. "He didn't mention a woman's right to choose. He didn't talk about civil unions," Matthews gushed. Barnicle called Webb "a member of the Democratic Party of my youth, of your youth, Chris," and went on to mention a list of men, men, men.

I happen to love Matthews on "Hardball." He is what he is, an old-school political junkie, an insider's insider who was wrong about impeachment but right about the Iraq war, who likes his men tough and his ladies pretty, and doesn't bother to hide it. He can get silly with women guests, but never sillier than when he's fawning over manly men. (I'll never forget the way, after savaging Vice President Al Gore through the whole 2000 campaign, he lost it over Gore's sad, dignified concession speech when Antonin Scalia made George W. Bush president, gushing over Gore's "sublime masculinity.")

On "Scarborough Country" the men on camera with me were just as gaga as Matthews over Webb, if a little bit less goofy. Pat Buchanan and Scarborough paid tribute to the Democratic military vet. But again the undercurrent was that Webb was standing alone in the Democratic Party, the lone man (and ex-Republican) with the cojones to stand up to Bush, lost in a sea of Nancys and Hillarys. Watching TV Tuesday night, you'd have thought Jim Webb had to manhandle Nancy Pelosi into letting him speak, that maybe he hogtied her and put her in a closet somewhere so he could deliver the prime-time address, rather than having been the happy choice of male and female party leaders.

It could be a long two years.

You could dismiss some of this as the nightly blathering of talking heads (I do my share; it isn't always pretty), except there's a bigger conversation going on here. A lot of men seem strangely spooked by the rise of Nancy Pelosi, and the lead Hillary Clinton currently holds in the Democratic presidential field. The normally sane and sober Ryan Lizza summed up the boys vs. girls theme in a silly New York Times piece two Sundays ago, "The Invasion of the Alpha Male Democrat." Afraid Pelosi's leadership means the Dems are now "the mommy party"? In fact, Democrats had elected a ton of menfolk with testosterone to spare -- flat-topped rancher Jon Tester of Montana, who'd lost three fingers in a meat grinder, former NFL quarterback Heath Shuler of North Carolina, and military men Chris Carney, Joe Sestak and Patrick Murphy.

It seemed like the self-congratulatory confection of some Democratic consultant afraid men were going to get scared away by all the estrogen in the air, and it was. John Lapp, the former executive director of the Democratic Congressional Campaign Committee who apparently helped find "this new breed of candidate," bragged to Lizza, "[W]e went to C.I.A. agents, F.B.I. agents, N.F.L. quarterbacks, sheriffs, Iraq war vets. These are red-blooded Americans who are tough." Lapp dubbed them "the Macho Dems."

Memo to Lapp and Lizza: Personally, I like alpha males; I like Nancy Pelosi, too. I'm thrilled by Jon Tester and Claire McCaskill. To paraphrase the crazy evangelicals, who used to remind us God gave us Adam and Eve, not Adam and Steve -- well, in 2007 God gave the Democrats Jim and Nancy, not Jim and Tim. Interestingly, the one Democrat who came to my mind as the sharpest contrast to Jim Webb wasn't a woman, it was John Kerry. Both men are decorated Vietnam combat veterans, but they couldn't be more different in the way they stood up to Republican bullies. Poor John Kerry let the Swift-boat hucksters neuter him; Jim Webb will never let that happen. Ironically, or not, I think Kerry saw the same thing I did. On Wednesday morning he announced he would not seek the Democratic presidential nomination -- more excellent news for Democrats.

Meanwhile, Republicans are showing they fear Jim Webb by savaging his speech. In a breathless "special to Newsweek" Op-Ed, former Bush speechwriter Michael Gerson proclaimed it full of clichés:

"Whenever a politician puts out to the media that he has thrown away the speechwriters' draft and written the remarks himself (as Webb did), it is often a sign of approaching mediocrity. This was worse. Senator Webb made liberal use of clichés: the middle class is "the backbone" of the country, which is losing its "place at the table." I am not even sure there is a literary term for a mixed metaphor that crosses two clichés ... It is, perhaps, a good thing that James Webb earned a job as senator. As a speechwriter he would starve."

It is a good thing. And as a senator, Mike Gerson would starve, so everyone should hold on to his day job. The Republicans know Webb's the real deal, and that jokes about his speech won't cut it. Democrats need to learn how to savor victory and build on it, rather than join pointless battling about who wears the pants in this party. Leadership diversity is a strength, not a weakness, and it would be a shame to let pundits lure party leaders into a battle of the sexes.