State of the climate

In Tuesday's speech, President Bush showed how unserious he is about global warming. Here's how Congress can put the heat on him and stave off approaching disaster. 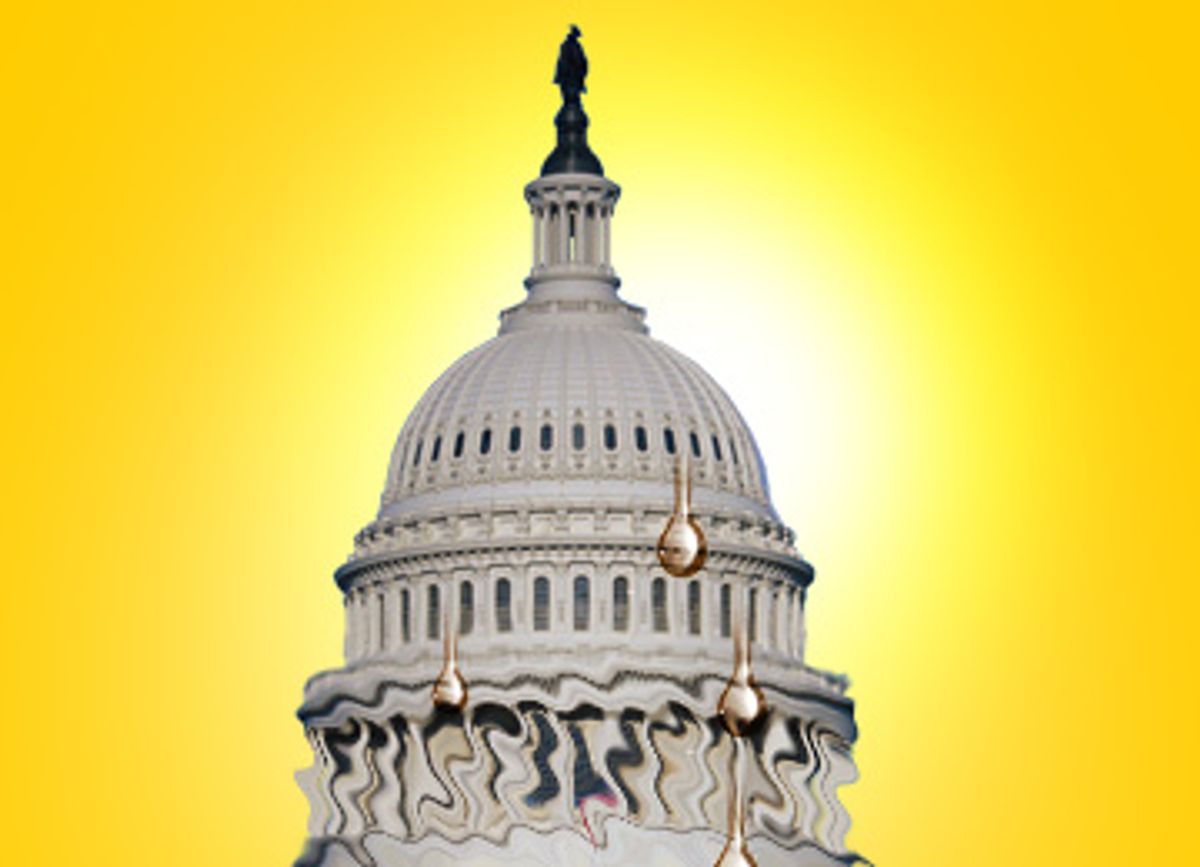 The Arctic ice shelf is snapping, the polar bear is threatened, and it was 70 degrees in New York in early January. The nation's top climate scientist, NASA's James Hansen, says: "I think we have a very brief window of opportunity to deal with climate change ... no longer than a decade, at the most." Otherwise, Hansen says, we risk an 80-foot rise in sea level and massive species extinction.

Sadly, President Bush offered no substantive, economy-wide proposals to address global warming in his State of the Union address. All the pre-speech hype about a White House U-turn on global warming turned out to be just over his use of the phrase "the serious challenge of global climate change." But his vagueness and platitudes about energy reform showed that he remains unserious about the worsening problem.

The president who addressed Congress on Tuesday night is the same one who said in 2006: "We need to set aside whether or not greenhouse gases have been caused by mankind or because of natural effects." Those remarks are in stark contrast to the forthcoming report from the United Nations Intergovernmental Panel on Climate Change, which reportedly now concludes that climate change is "very likely" caused by humans.

Despite an uncooperative president who wields veto power, what should the Democratic-controlled Congress do -- beginning right now -- to address the increasingly urgent problem?

Congress should adopt a three-phase strategy for avoiding catastrophic climate change, one that would generate the jobs and technologies of the future, and move the United States toward energy independence. First, it must pass every piece of legislation it can in the next two years to accelerate the actual deployment of energy-efficient and renewable technology. Second, it should develop comprehensive legislation to cap carbon dioxide emissions at 1990 levels by 2020 -- but don't try to get Bush to sign it if that means compromising on the ultimate targets. Third, it must dramatically increase R&D funding so that after we spend the next two decades deploying existing technology, we can deploy the next generation of technology to take us more than 50 percent below those 1990 levels by 2050.

By far the top global-warming policy priority is creating a market that would establish a price for emitting carbon dioxide. This would be similar to the successful system used to trade emissions of sulfur dioxide under the Clean Air Act, though more complicated.

Expecting the president to support a national carbon cap and trading system seems unlikely: He campaigned in 2000 on establishing such a carbon trading system but then famously reneged on the pledge soon after taking office. Worse, in December 2004, the Financial Times reported that U.S. climate negotiators had actually worked to sabotage international efforts to cap emissions after 2012. And in September 2006, the Wall Street Journal reported, "the President damped speculation that his administration is exploring a major shift in global-warming policy and may soon embrace some kind of formal government-imposed limits."

Congress should spend the next year developing comprehensive legislation to achieve national goals for reducing greenhouse-gas emissions. And as comprehensive legislation is being developed, Congress should pursue every other legislative strategy to reduce emissions, starting with an aggressive push to increase fuel-economy standards for cars and trucks. Requiring a 4 percent annual increase in fuel efficiency for all cars and light trucks would be a good start, and Bush endorsed this approach in his State of the Union address.

While we are making vehicles more efficient we should require them to use less-polluting fuel. The least likely alternative fuel is hydrogen. Hydrogen cars cannot help us reduce greenhouse-gas emissions before midcentury -- and we simply can't wait that long. The two likeliest fuels are ethanol and electricity. Funding for R&D into new technologies and tax credits for alternative-fuel vehicles have their value, but no country has ever successfully introduced an alternative fuel into the broad consumer market without government mandates. Market forces alone cannot overcome the built-in advantages of the petroleum industry, which has trillions of dollars already sunk into its infrastructure. Even Brazil succeeded with ethanol only after the government mandated a minimum blend of ethanol in gasoline and required that all gas stations have an ethanol pump.

If we are serious about reducing our large and growing addiction to oil -- especially oil from unstable governments -- we need to require the use of alternatives. Congress should set a requirement of 20 percent renewable fuels by 2020 and help fund a new fueling infrastructure. The likeliest candidate is cellulosic ethanol from biomass, such as agricultural waste or dedicated crops. Corn ethanol is a useful transition fuel but lacks both the necessary environmental benefits and the capacity to replace a significant fraction of oil.

Congress should also accelerate the introduction into the marketplace of plug-in hybrid vehicles -- advanced hybrids with larger batteries that can be charged overnight. Even a hybrid with a 20-mile all-electric range (before reverting to gasoline power) would give most commuters the ability to cut their gasoline consumption in half. Congress could require that 10 percent of cars in 2020 be plug-ins with a 20-mile or greater all-electric range.

I believe these mandates would also save the U.S. auto industry, which is being crushed by foreign companies like Toyota, by forcing U.S. automakers to build the low-carbon cars of the future that everyone in the world will eventually be driving. Unfortunately, U.S. automakers, championed in Congress by House Energy and Commerce chairman John Dingell, D-Mich., do not look at the world this way. A deal may be needed whereby the federal government helps auto companies invest in the market of the future.

Congress must also clean up electricity. It should require 20 percent of electricity in 2020 to be from renewable, non-nuclear sources. The Energy Policy Act of 2005 has more than enough subsidies for the next generation of nuclear plants, so Congress needs to do nothing further to help the nuclear industry.

To accelerate requirements for energy efficiency, Congress needs to establish a multibillion-dollar public benefits fund coupled with aggressive building codes that reduce electricity consumption. California offers a model example: Over the past three decades, California kept per capita demand flat using such measures, while electricity per capita rose 60 percent in the rest of the country. And California's efficiency investments cost 2.9 cents per kilowatt hour -- far cheaper than the cost of building new power plants. By 2004, greater focus on deploying the most efficient technologies cut the average cost of California's efficiency programs in half, to under 1.4 cents per kilowatt hour. That's cheaper than any form of new power supply -- and far cheaper than any carbon-free power.

Finally, Congress must also focus on coal. The top priorities are to stop building traditional coal plants and build only goal gasification plants with carbon capture and storage. But that won't happen until there is a serious price to be paid for carbon dioxide emissions. Many utilities are trying to build the "last dirty" coal plant using traditional technology -- hoping that they will escape regulation. To stop that gaming, the new Congress, within its first 100 days, should pass a law stating that no coal plant built after 2005 will be grandfathered out of any future carbon trading system. We must not reward companies for building dirty coal plants that last 50 years, while pretending that carbon will not be regulated in the near future.

Congress must move forward without any illusions on this critical issue. Passing a weak global-warming bill -- one with lame goals acceptable to Bush -- would be worse than no bill at all because it would allow members to say that they had acted on climate change, without any real results. And the last thing we need to do is pass a climate bill that the president guts with one of his notorious signing statements.

We can only hope the next president will be more open to serious legislation on climate change: The Republican front-runner is climate champion John McCain, and all the leading Democratic contenders have embraced strong action on climate change. But Congress must persevere at this critical juncture. If lawmakers are able to enact these measures, then we will be on course to avoid catastrophic warming in the coming decades. The alternative is likely to be real-life disasters already familiar to us from Hollywood movies: searing heat waves, mega-droughts, rapid rises in sea levels, and super-hurricanes that would create a "hell and high water" on Earth.