The day after Bush got cheers for mentioning Darfur, members of his own party blasted him for neglecting the region. Does a new Congress mean new hope? 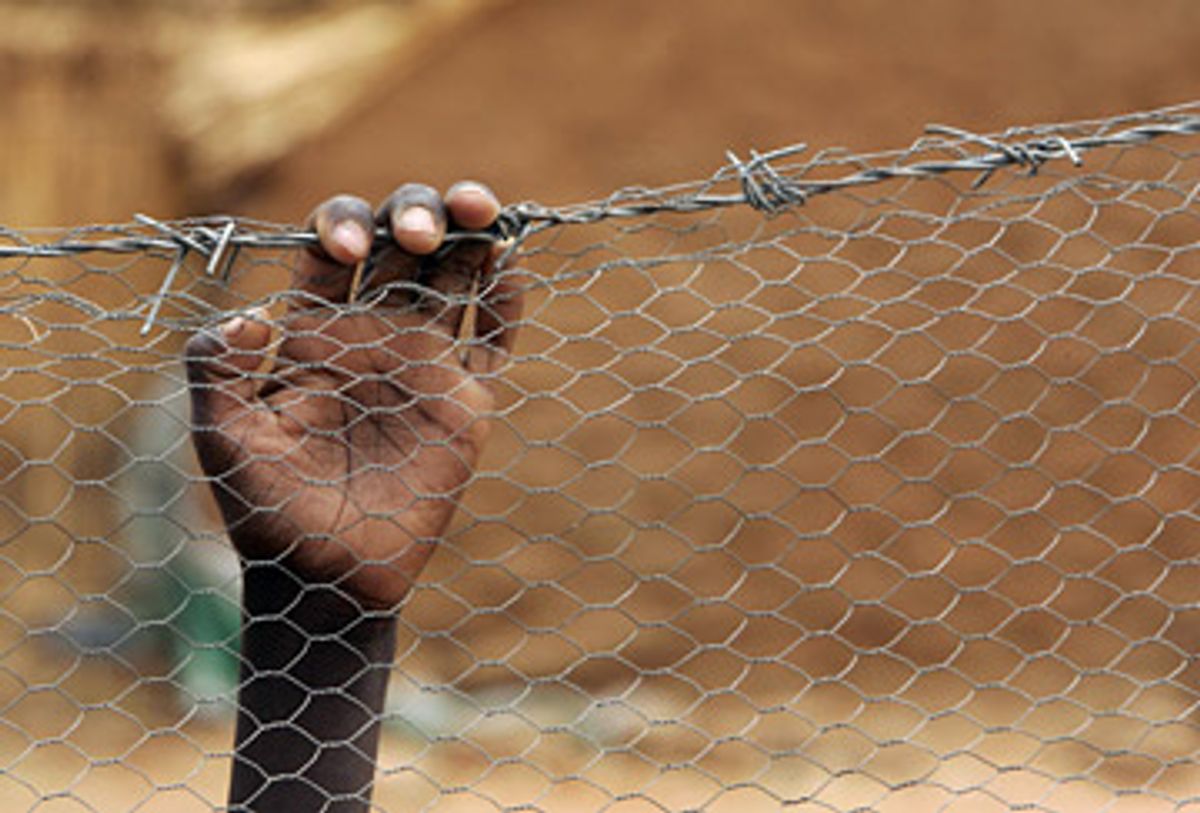 One of the least noticed lines in President Bush's State of the Union address Tuesday caused perhaps the most enthusiastic bipartisan standing ovation. "We will continue to speak out for the cause of freedom in places like Cuba, Belarus and Burma," Bush announced, "and continue to awaken the conscience of the world to save the people of Darfur."

But 13 hours later, Congress was raising questions about the president's strategy to end the Darfurian genocide. A senior Republican House member and a former Bush administration diplomat appeared before a key House subcommittee Wednesday to criticize both Congress and the White House for their handling of the Sudanese government, which is actively facilitating a genocide that has taken as many as 400,000 lives while displacing an estimated 2.5 million people since 2003.

"There is a fundamental flaw in the way the United States has been approaching Sudan in recent years," said Roger P. Winter, a Bush appointee who served last year as the State Department's special representative for Sudan. He compared some of the administration's diplomatic efforts to the folly of trying to work out difficulties with the Third Reich. Sudan was not a responsible government, he said, and "does not have the best interests of the people of all of Sudan at heart."

At the same hearing, Rep. Frank Wolf, R-Va., a longtime human rights leader, raised his voice before the committee as he condemned America's refusal to confront the nations and companies that are funding the genocidal Sudanese regime. "Chinese and Malaysian oil companies are aggressively developing these oil fields with virtually no accountability," Wolf nearly shouted, as his voice began to crack. "The members of this body and this administration will not deal with the Chinese issue. This Congress and this administration just will not confront this issue."

The event marked the first of several planned hearings by Democratic leaders in the House and the Senate to pressure the Bush administration to take more aggressive steps to deal with Sudan. In the Senate, Russ Feingold, D-Wis., the returning head of the Foreign Affairs Subcommittee on Africa, has promised to hold hearings in the coming weeks. "We have to hold both the administration and the international community accountable for a more effective strategy," Feingold said. He recently signed on to a letter to President Bush from 16 Democratic and six Republican senators requesting more involvement in developing the U.S. policy toward Sudan. "We believe the time has come to begin implementing more assertive measures," the letter said, without spelling out specific proposals.

Similarly, Rep. Don Payne, D-N.J., who now chairs the House Committee on International Relations' Africa and Global Health subcommittee, which conducted Wednesday's hearing, has promised a renewed effort, including another hearing with Bush's current envoy to Sudan, Andrew Natsios. "We need to try to get a unified effort," Payne said. "I guarantee you in the House that it will certainly be stepped up."

To date, there is no clear consensus among congressional leaders about what actions Congress should take to push for a strengthened policy. House Speaker Nancy Pelosi, Payne, Wolf and others have endorsed legislation by Rep. Barbara Lee, D-Calif., that would blacklist foreign companies that do business with Sudan from federal contracts; disclose federal pension investments in those companies; and require the Securities and Exchange Commission to publish a list of the companies, in hopes of discouraging private investors. Senators and representatives have discussed other initiatives, including putting aerial drones on patrol in the skies over Darfur, increasing the funding for peacekeepers, and passing resolutions to further condemn those responsible for the atrocities.

Feingold has yet to commit to any specific proposals for addressing the situation in this Congress, though he said he was not satisfied with the Bush administration's current approach, which focuses on a plan to dispatch United Nations and African Union peacekeepers to the region. The Sudanese government has repeatedly flouted deadlines for allowing those forces to deploy, even as reports from the Darfur region detail a rise in murderous raids on civilians by the government-backed janjaweed militias. "The current steps that are being taken to promote a joint African Union and United Nations force are not a substitute for what is necessary," Feingold said.

He said the Bush administration should begin to look at what he called "the big options," a list that may include a no-fly zone over Darfur, steeper criminal sanctions against leaders of the Sudanese government, and more aggressive sanctions against the companies that do business with Sudan. But Feingold declined to describe the details of the plan he will endorse, because he said he is still studying the issue. "I do think it's possible that the president would respond to any strong bipartisan action," he added.

The situation in Darfur, an arid region of western Sudan the size of France, is complicated by the tenuous state of a 2005 U.S.-brokered peace agreement to end a separate civil war in the southern part of Sudan. Over 21 years, that conflict killed a reported 2 million people and displaced 4 million more. The former envoy Winter, who helped broker the peace deal, said Wednesday that the Bush administration cannot ignore the Sudanese government's apparent refusal to abide by key portions of the peace deal. He says he believes that the situation in the south is unraveling and expects horrible consequences if circumstances do not change. "It will lead to violence," he said. "And it will be violence of the nature that we see in Darfur."

Leaders from both political parties long ago committed themselves to stopping the violence in Darfur, to little effect. "We will call genocide by its rightful name and we will stand up for the innocent until the peace of Darfur is secured," Bush announced last May. Prominent conservatives, like Senate Majority Leader Bill Frist and Sen. Sam Brownback of Kansas, a GOP White House hopeful, have led fact-finding missions to Darfur. Three Democrats in the House have been arrested for protesting in front of the Sudanese embassy. Upon her election as House Speaker, Pelosi attended a Mass commemorating Darfur's fallen children.

Outside observers say that what the nation now needs is a Congress that can force a radical reconsideration of the U.S. approach to Sudan. "The name of the game for Congress is to change the terms of the discussion," says Susan Rice, a former assistant secretary of state for African affairs, who now works at the Brookings Institution. "By a series of hearings, opened and closed, Congress should demand that the administration put forward concrete plans."

John Prendergast, who worked on Africa policy for the Clinton White House, says he does not foresee a realistic military solution to the problems in Sudan, given the politics of the region and the American aversion to large-scale military incursions in Africa. Instead, he has been advocating a renewed effort to place serious international criminal penalties on anyone in the Sudanese government who is complicit in genocide. "Until there is the threat of punitive action, nothing will change," Prendergast said. "Ultimately we have to go after this regime and go after them hard."

As it stands, many Sudanese leaders who have been tied to atrocities are free to travel the world at will. At Wednesday's hearing, Payne said that one Sudanese official who has been directly tied by human rights groups to the genocide, Ali Ahmed Karti, is scheduled to travel to the United States next month to attend the National Prayer Breakfast, a private event sponsored by a Christian nonprofit group. "The sponsors of a prayer breakfast should not invite a man who has blood on his hands to pray with those same hands," Payne said. "It's wrong." Karti, a former general who serves as Sudan's deputy foreign minister, traveled to the United States last year as well, when he reportedly attended a similar prayer breakfast.

There is a growing sense in Congress that a new approach must be found. In recent months, when describing the moral dilemma faced by the Congress and the American people, Wolf has invoked the words of Dietrich Bonhoeffer, a German theologian who was executed by the Nazis. Bonhoeffer, an anti-fascist who helped Jews escape to Switzerland and participated in a plot to kill Hitler, wrote that there was a difference between what he called "cheap grace" and "costly grace." "Cheap grace" he wrote in one of his most famous passages, "is the preaching of forgiveness without requiring repentance." By contrast, explained Wolf, "real grace is that you are willing to pay the price for what you believe in."

Historians tell us that American government has never had "real grace" when it comes to genocide. It stood by as Saddam Hussein gassed his Kurdish countrymen, as Turkish forces slaughtered Armenians, and as the former Yugoslavia initially descended into ethnic cleansing. "No U.S. president has ever made genocide prevention a priority and no U.S. president has ever suffered politically for his indifference," wrote Harvard University professor Samantha Power, in her history of 20th century genocide, "A Problem From Hell."

Though the applause at the State of the Union address offered an encouraging sign for the people of Darfur, it was only symbolic. Wolf and other members of Congress said earlier this month that they hope the public continues to put pressure on the Congress and the White House to do more in Sudan. "I think we could picket the Chinese embassy," he said of one of Sudan's largest financial patrons. "We could picket the Sudanese embassy. There ought to be college kids outside the United Nations every day."

"This thing will come to an end," he added a moment later. "The question is how many more people will die."

State Of The Union United Nations