The bipartisan war on Bush

Republican senators joined their counterparts in taking aim at Bush's Iraq plan -- even if they were only shooting blanks. 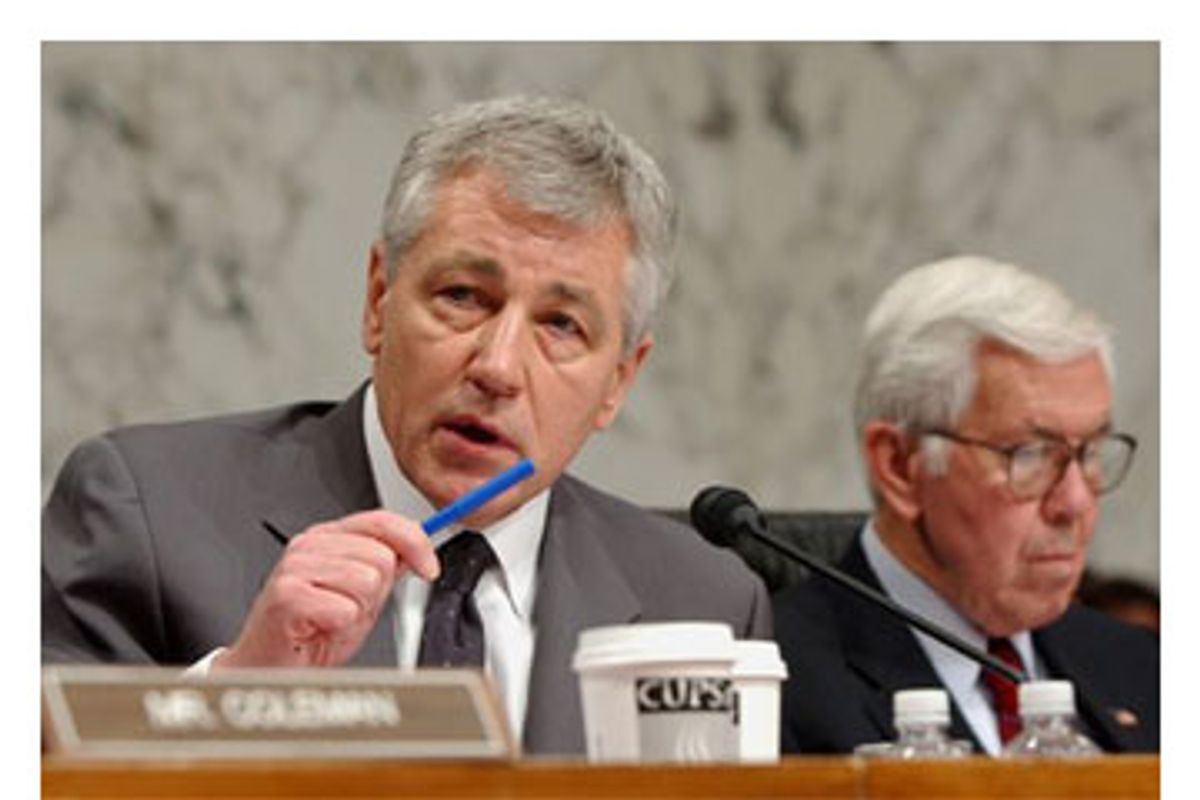 The Senate on Wednesday took baby steps toward opposing President Bush's strategy in Iraq, as the Senate Foreign Relations Committee moved forward a nonbinding, legally toothless statement opposing deeper military entanglement there and pushing for more diplomacy in the region.

In their criticism, Democrats and Republicans seemed to share the same talking points. Senators from both parties spoke of the ramifications of failure, the United States' dwindling options, and their skepticism about war plans from a White House that has made mistake after mistake. They expressed deep concern about the futility of sending 20,000 more troops into the Baghdad cauldron to referee a deepening civil war. But while almost every lawmaker on the panel was openly dismissive of Bush's plan, the Republicans' words spoke louder than their actions when it came down to the vote.

"I am not confident that President Bush's plan will succeed," Republican Sen. Dick Lugar of Indiana, a GOP leader on foreign affairs, said flatly. But Lugar did not vote in favor of the resolution, which ultimately passed, 12 to 9. The resolution heads to the floor for a full Senate vote as early as next week.

The nonbinding resolution under consideration states, "It is not in the national interest of the United States to deepen its military involvement in Iraq." It goes on to recommend focusing on a political solution leveraged by a greatly expanded diplomatic initiative in the region -- akin to the plans outlined recently by the Iraq Study Group. The resolution is intended to express the views of Congress, but it carries no legal weight and the White House is expected to ignore it.

Maverick Republican Chuck Hagel, a decorated veteran, called on his colleagues to vote yes as a matter of conscience. "There is no more serious issue than any of us will ever deal with, when men and women are sent to fight and die," the senator from Nebraska said with some anguish. At times, Hagel, who has shrapnel in his chest from Vietnam, seemed torn emotionally by the debacle in Iraq. "I will not sit here in this Congress at this important time and not have something to say about this," he told the panel. "Maybe I have no political future. I don't care."

In the end, Hagel, a possible long-shot presidential candidate, was the only one of 10 Republicans on the committee to vote in favor of the resolution, joining all 11 Democrats.

Hagel may not care about his political future, but politics did not seem to be far from the minds of the men and women on the dais. This resolution doesn't mention cutting off funding for the war, seen by some Democrats as a political third rail. So Democrats were left to defend the symbolic resolution as a first step that might lead to more aggressive efforts by Congress to wrest the reins of the war from the White House.

"This is our first, most immediate and most practical way to affect the president," said committee chairman Joe Biden, D-Del., a presidential candidate, who drafted the resolution along with Hagel. Biden added that right now, the resolution is the only thing that might pass. "The bottom line is we need a majority of the votes," he said.

The political dance by the Republicans was even more disjointed. Most of the GOP members on the Foreign Relations Committee bashed the White House strategy as wrongheaded -- and then proceeded to vote against the resolution, which says exactly that. Some Republican senators seemed wary of alienating their conservative base, particularly for a resolution they said would have no impact on the course of the war.

Still, they were certainly talking the talk.

"The thing that I'm deeply concerned about is putting American troops in the crosshairs of this sectarian battle," worried Sen. Norm Coleman, R-Minn., who faces a difficult 2008 reelection campaign. On the other hand, Coleman also quickly noted the risk of letting Iraq fall into a Balkan-like abyss. "Iraq is a mess," he said. "But I'm not ready to pull the plug."

Other Republicans expressed strong reservations about Bush's latest Iraq strategy, less than a day after the president asked for more patience in his State of the Union address. "I happen to disagree with the president on the surge," noted Sen. Lisa Murkowski of Alaska. "I don't believe it is the most effective way for us to move forward at this point in time." She called the surge "more of the same."

Bob Corker from Tennessee, the only newly elected Republican senator in the 110th Congress, said he is "not persuaded" that Bush's plan will work in Iraq. And he added that the White House's credibility with Congress and the American people was sinking. "I think there have been many mistakes on the part of the administration," he said. "More than sometimes I can imagine."

Only Sen. David Vitter, a conservative Republican from Louisiana, offered a tepid defense of the president's plan. Vitter may be part of a small club at this point: Bush reportedly joked that he would rely on First Lady Laura Bush and the Bush's dog Barney if public support for Iraq continued to dissipate. Vitter said he would support the surge as a "final attempt" to secure Baghdad. But even he quickly added that Congress should "reexamine and reexamine and make extra sure" the surge plan is not backfiring once it is put into effect.

Republicans offered a host of reasons to explain why they would say one thing and then vote the opposite way. Lugar argued that Congress should step up oversight of the war, but that the resolution would "confirm to our friends and allies that we are divided and in disarray." Corker said in an interview after the session Wednesday that he did not vote for the resolution, in part, because it simply does not do anything. "This resolution will have zero impact," he said.

But the politics of the war is clearly shifting in Congress, evident in Republican Sen. John Warner's recent decision to push a separate but very similar resolution toward the Senate floor. That can't be welcome news at the White House. Warner, the former chairman of the Senate Armed Services Committee, is the GOP's elder statesman on national security -- and his going against the surge plan may throw the door wide open for more rank-and-file Republicans to confront the president's mismanagement of the war.