A werewolf girl, a human boy, a little blood and, yes, some chocolate combine to make this delicious B-movie confection. 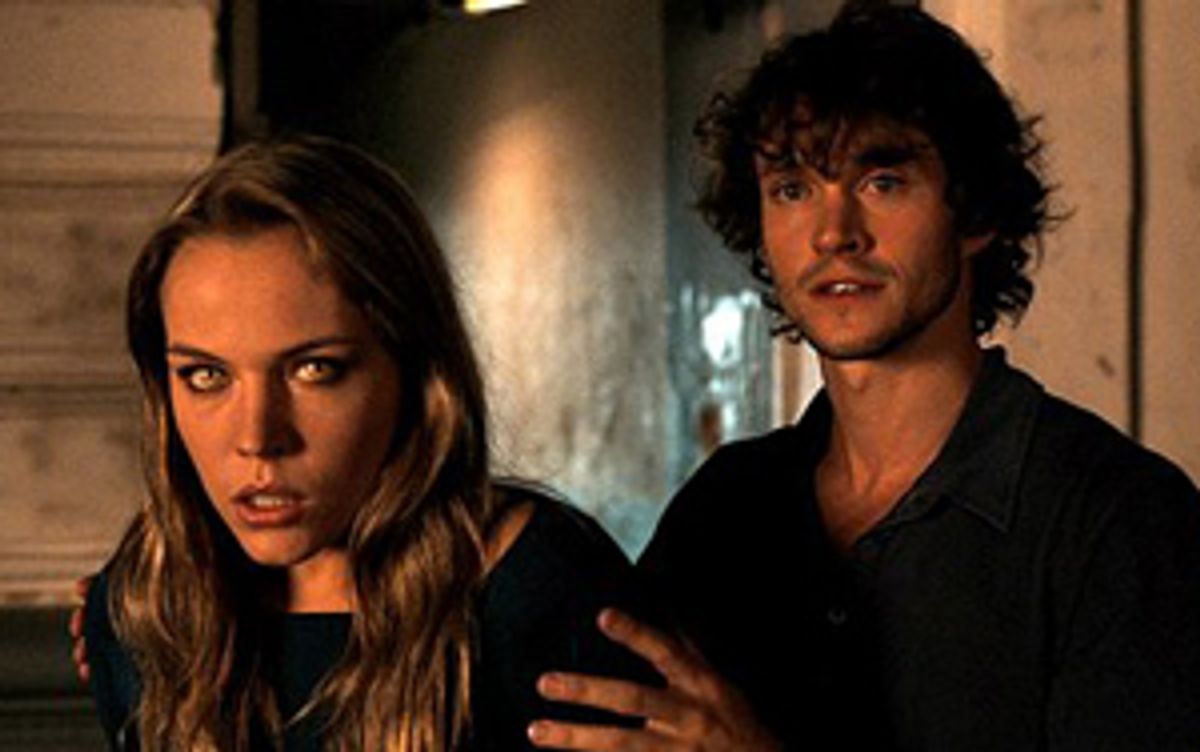 Katja von Garnier's "Blood and Chocolate" offers the kind of B-movie pleasures -- albeit elegant B-movie pleasures -- that are hard to come by these days. This is the story of a werewolf girl, Vivian (Agnes Bruckner), who falls in love with a human boy, Aiden (Hugh Dancy) -- a potential disaster not only because Vivian is the top candidate to become the mate of werewolf Prince Gabriel (Olivier Martinez), but also because her attraction to a human is a betrayal of her tribe, an ancient line of troubled, mysterious and not wholly unprincipled wolf creatures who wish mankind would just leave them alone.

The IMDb boards are buzzing with people who have read the young-adult novel (by Annette Curtis Klause) on which the movie is based, decrying the numerous liberties co-writers Ehren Kruger ("Skeleton Key") and Christopher Landon have taken with the story. That's always an issue when beloved books -- or even just OK ones -- are turned into movies. But never having read the book, I found "Blood and Chocolate" to be a lovely surprise, an imaginative and visually lush picture firmly rooted in the tradition of gothic romance and elegiac horror films about misunderstood monsters.

The picture was filmed entirely on location in Romania -- Vivian is an American, but her parents were killed when she was small, prompting her to move abroad to live with her were-aunt, Asrid (played by German actress Katja Riemann). The setting helps make the movie: Cinematographer Brendan Galvin shoots Bucharest, a city of dusty-velvet luxury and faded stone, as a bastion of noble pride and centuries-old grandeur, the only place, really, for werewolves with superb taste. As Gabriel explains, his "people" have been driven from America, from France and from England: Only Romania will have them, and they support themselves by making and selling that mysterious and romantic brew known as absinthe, which they process in a cavernous old factory. And Vivian works in a candy store, an old-world chocolatier with a deep-red facade, which sells exquisite bonbons. It's a place catering more to refined tastes than to lusty appetites, a haven for a werewolf girl straddling two worlds.

Von Garnier and her writers may have taken liberties with Klause's book. But the movie stands tall partly because of all the mistakes they didn't make. There's deep mythology in "Blood and Chocolate," but it's not so labyrinthine that you need to draw eight diagrams to parse it. Too often, complicated mythology is used to mask a lazy script, but von Garnier never loses the thread of her story here. The promo-screening audience I saw the movie with giggled at some of the dialogue, but I think it all fits with the movie's tone and mood, and the actors seem to be in sync with the movie's mission. Bruckner, an appealing but suitably brooding presence, has retro-fresh good looks: With her Breck-girl blond hair and Ivory-girl complexion, she reminds me of the models who used to grace the pages of Seventeen magazine in the '70s, girls you might have envied yet couldn't bring yourself to dislike. And Martinez plays Gabriel as a Euro-sexy heartthrob. He's smoldering in a just slightly over-the-top way -- for me, he conjured enjoyable memories of Rudolf Nureyev in James Toback's "Exposed."

"Blood and Chocolate" splinters a bit in its final act -- the wrap-up includes some exciting sequences, but it needs to move more swiftly and smoothly. But that doesn't much diminish the rapturous fun that the rest of the movie offers. The special effects in "Blood and Chocolate" are, by contemporary standards, relatively basic. There's no elaborate CGI human-to-wolf transformation; what von Garnier does to show how these creatures shift into wolf form is much simpler and much more eloquent, an effect that seems to harness the glow of moonlight. (The movie also showcases real wolves, in all their shaggy glory.) "Blood and Chocolate" is relatively low on gore: There's some blood (as well as, of course, chocolate), but the violence is relatively discreet. Von Garnier prefers to focus on the romance of the story, and its mournful, poetic mood. In "Blood and Chocolate" the old world meets the modern one, holding out a tentative paw.