Jude Law and Robin Wright Penn star in this tale of well-heeled Londoners who find themselves facing life's dark side. 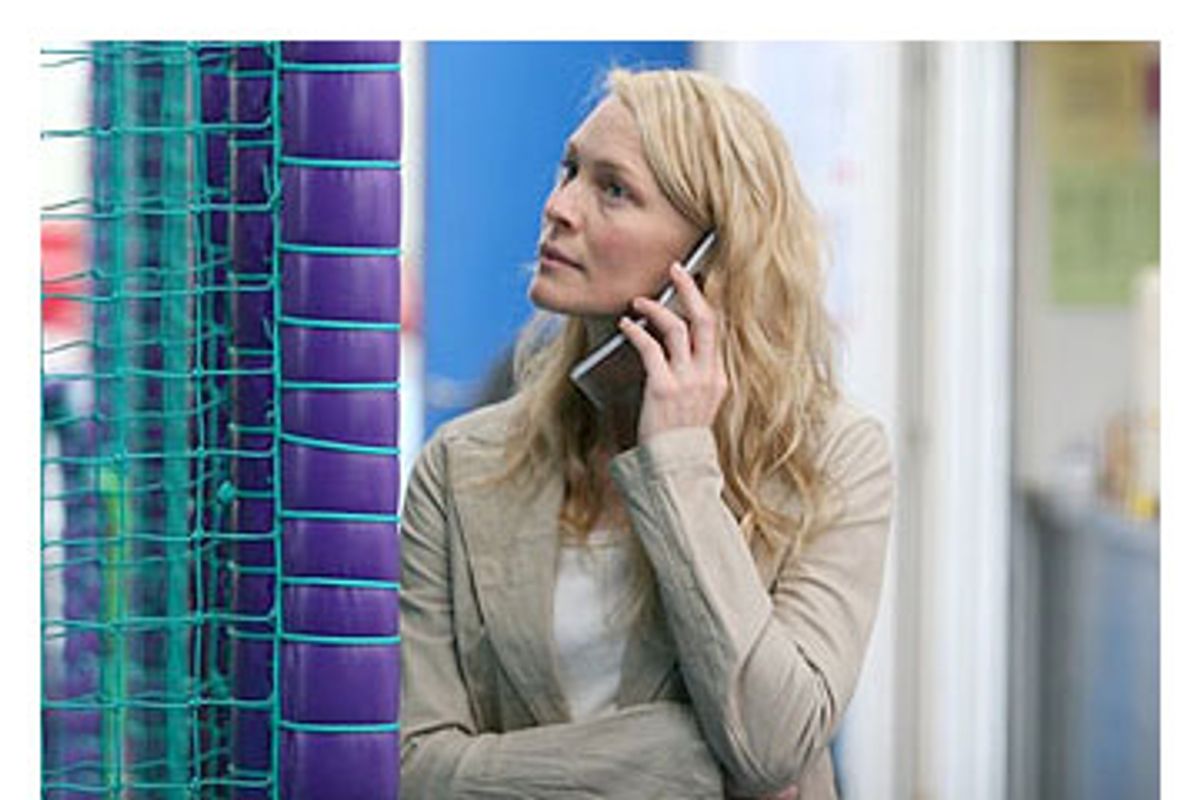 Midlife is a bummer. But for Anthony Minghella, it's a rarefied, tasteful bummer. From the opening voice-over in "Breaking and Entering" -- in which Jude Law's slouching-toward-middle-age architect wonders in crisp, plummy tones what it means when longtime partners simply stop looking at one another -- we know we're headed for "If we could only learn to unclench our jaws, we might be able to live life more fully" territory. Marital malaise, the impermeability of class and ethnic barriers, the difficulties of raising a child who has special needs: Minghella covers it all in this tale of well-heeled Londoners who suddenly find themselves looking on the dark side of life. There's even an Eastern European hooker named Oana (played by Vera Farmiga) who imparts words of wisdom to our hero in a carnival fortuneteller accent. "Breaking and Entering" might have been farce, if Minghella weren't so dead-serious.

In "Breaking and Entering," heavy-duty metaphors dangle like slabs of baloney in a butcher's shop; no character can walk two steps without bumping into one. Minghella -- who appears to have taken a break from browsing the "Classic Favorites" table at Waterstone's to write the script -- is so busy festooning his creations with convenient ironies that he prevents them from getting on with the tough-enough business of just being people. The actors trudge forth valiantly, trustingly, trying to make sense of it all: Will (Law), is a successful professional; he's been with the same woman, the Swedish-born Liv (Robin Wright Penn), for 10 years, and together the two are raising a child, Bea (Poppy Rogers). Will's life looks OK from the outside, but we quickly see that it's deflating from within: He's committed to Liv, yet he can't quite commit. He loves Bea, but she's a troubled child who's nearly impossible to figure out. And a noisy fox keeps sneaking into his garden.

What's more, Will has just moved his architecture firm's offices to a not-quite-gentrified part of London. To his dismay, the massive, stark-luxe loft space is broken into repeatedly: The thieves, a group of teenage boys working for a thuggish ringleader, make off with laptops and printers -- and then come back for more once the items have been replaced. One of these boys is Miro (Rafi Gavron), a bright, thoughtful kid who lives with his mother, Amira (Juliette Binoche), who supports herself and her son with her small tailoring business. The two of them have come from Bosnia, and while Miro has become somewhat assimilated, Amira still carries scars from the past.

Unsurprisingly, the lives of these numerous characters intertwine in surprising ways -- in movies like these, do they ever intertwine in dull, everyday ways? The story is so meticulously controlled it seems to have been written to a metronome. Minghella has a tight grip on it every minute, to the point where the actors often look as if they've stopped breathing. Penn, who's capable of being a charming and vital presence, gives a flat, dull performance here -- all the color has been washed out of her. Law isn't the completely shellacked, witless actor I thought, at the beginning of his career, he might turn out to be. But he needs lighter, more airborne roles than this one: His Will is supposed to be entrenched in an existential crisis, but more often, he just looks annoyed or zonked out. Binoche is the only actor here who shows much spirit: Even though Amira shoulders more real troubles than anyone else in the movie, Binoche manages to give the character some buoyancy. She lets air and light into the movie.

Briefly, before he became a director of exquisite taste, refinement and dullness with pictures like "The English Patient" and "Cold Mountain," Minghella was a wonderful, lively filmmaker: His 1991 "Truly Madly Deeply" was one of the loveliest romantic movies of that decade. Minghella is conscientious about giving us pretty pictures to look at (the cinematographer here is Benoit Delhomme, whose images and compositions throw off an austere elegance). And "Breaking and Entering" isn't infected by the weird moralism you see in so many movies about marital infidelity. Minghella seems to be suggesting that partnerships are often stronger than the puny expectations we fence them in with.

But "Breaking and Entering" is so bloodless that even Minghella's best ideas come off as wan and pale. We're aware of the angst and confusion these characters suffer, and yet the movie shows us nothing so messy as real pain. At one point Oana lectures Will about his hatred for that pesky, intruding fox: "The one wild thing in your life, and it makes you crazy." The fox may be wild, but the metaphor isn't. It's simply dead and stuffed.