Ghosts of dirty tricks past

The right-wing smear campaign against Barack Obama, with its telltale twist of linking Hillary Clinton to the attack, is classic Watergate. 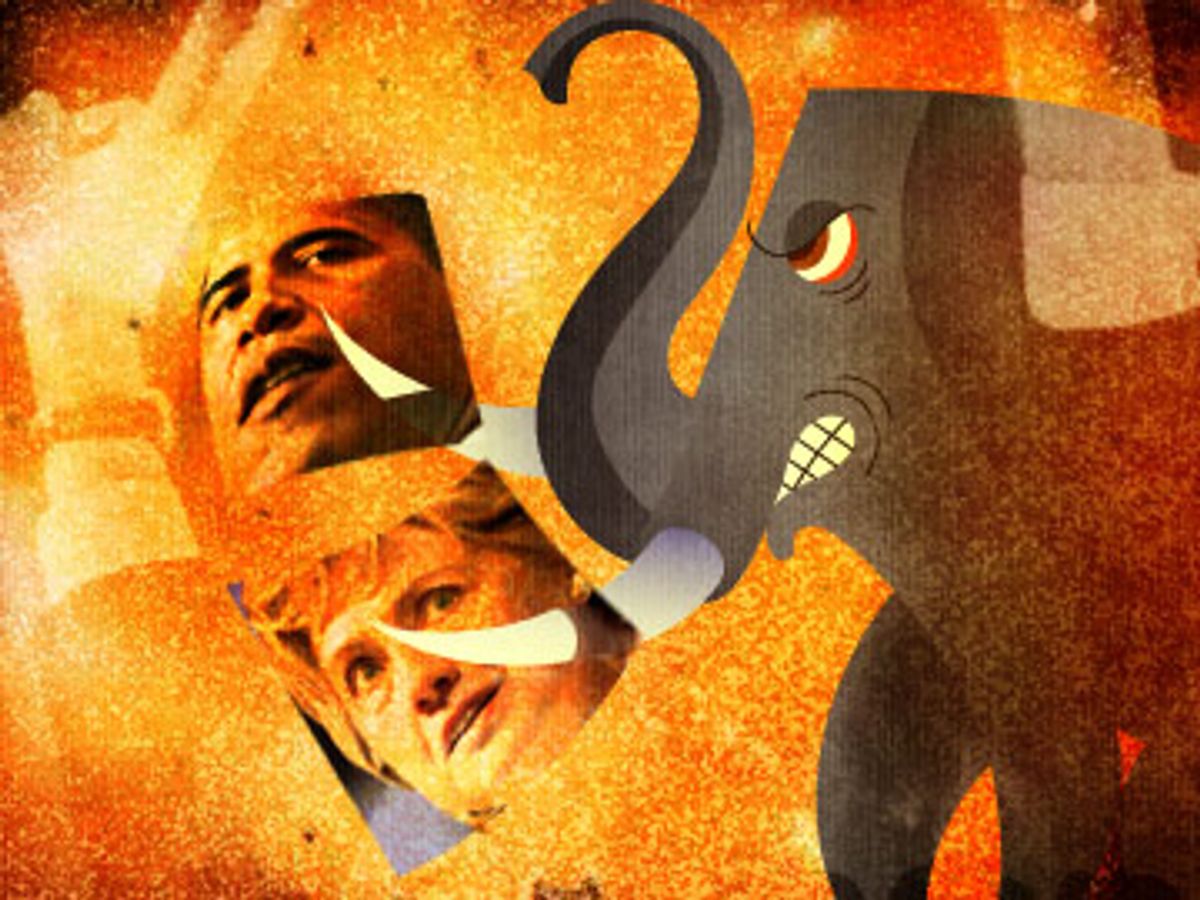 As the 2008 presidential campaign began last week, there was something inauspicious and even spooky in the political atmosphere, with strange echoes of ugly deeds committed more than 35 years ago.

On Tuesday, Watergate felon E. Howard Hunt passed on into history at the age of 88. But even while he lay dying in Miami, not far from the late President Nixon's Florida retreat, Hunt's spiritual heirs were orchestrating a classic Watergate-style dirty trick against both Barack Obama and Hillary Rodham Clinton. Not coincidentally, the perpetrators included certain veterans of the old Nixon gang, whose baneful influence on American politics has only grown over the decades.

At first glance, the trick was merely an ordinary right-wing smear, twisting a small fact torn from context into a sinister accusation. Almost 40 years ago, little Barry Obama -- who would grow up to become a stellar law student, a bestselling author, a U.S. senator and a contender for the Democratic presidential nomination -- spent part of his childhood in Indonesia, where he lived with his mother and stepfather. During those years he attended an elementary school run by Muslims, long before the rise of Islamic fundamentalism, and then as an adult joined a Christian church in Chicago.

Yet on the far right, poisonous propaganda can be concocted from the most innocent ingredients. That is precisely what the Unification Church's Insight magazine proceeded to do on Jan. 19, with the eager assistance of Fox News Channel and right-wing Web sites such as Lucianne.com. Insight portrayed the Indonesian school as a "madrassa," suggesting the Saudi-financed institutions that allegedly train Wahhabi terrorists in Pakistan and elsewhere, indicated, to incite religious prejudice, that Obama had been "raised Muslim" -- and then attributed these fabrications to political operatives in the Clinton camp.

These false claims lacked any sourcing, but that didn't prevent the usual media miscreants from broadcasting them, from John Gibson on Fox's "The Big Story" and Rush Limbaugh down to Melanie Morgan and her sidekick at San Francisco's KSFO radio station. Just the usual modus operandi of the noise machine -- except for that telltale twist of smearing Clinton with responsibility for the attack.

Where could they have gotten that brilliant idea?

Performing a dirty trick on one Democratic presidential candidate in a way that would reflect blame on another Democrat was the specialty of the Watergate crew led by Hunt, which back in the early '70s included G. Gordon Liddy and Donald Segretti, as well as a host of lesser goons and spies such as the ingénue Lucianne Goldberg.

According to "Nightmare: Underside of Nixon Years," the definitive book on the Watergate scandal, by the late, great journalist J. Anthony Lukas, Goldberg filed gossipy espionage reports from George McGovern's press plane on "who was sleeping with whom, what the Secret Service men were doing with the stewardesses, who was smoking pot on the plane -- that sort of thing." Or so she told him.

Meanwhile, Segretti and company had been putting out nasty smear stories about certain Democratic candidates and attributing the smears to other Democrats, in order to divide the opposition and destroy Nixon's potential competitors.

During the Florida primary campaign, reported Lukas, the Nixon gang printed up fliers attacking Sen. Edmund Muskie's position on Israel and placed them under the windshield wipers of cars parked outside Miami Beach synagogues. Those scurrilous fliers were designed to look as if they had been distributed by New York Mayor John Lindsay, also running for president as a Democrat.

Around the same time, on stolen Citizens for Muskie stationery, a letter went out attacking Sen. Henry "Scoop" Jackson. "We on the Sen. Ed Muskie staff sincerely hope that you have decided upon Senator Muskie as your choice. However, if you have not made your decision you should be aware of several facts." Those supposed facts were that Sen. Jackson, as a high school senior in 1929, had fathered an illegitimate child with a teenage girl -- and then had been arrested on charges of homosexuality in Washington in May 1955 and October 1957. The charges were all lies, as was the claim in the same letter that former Vice President Hubert H. Humphrey had been arrested for drunken driving in December 1967 with a prostitute in his car. The bogus letter was intended not only to encourage rumors about Jackson and Humphrey, both of whom were potential candidates against Nixon, but to create chaotic civil war among the Democrats.

As one of Hunt's operatives later explained, "The idea was to get the candidates backbiting each other and possibly starting doing it to each other outside our activities."

It is worth pointing out that Goldberg is not the only contemporary propagandist whose sordid roots trace back to Tricky Dick. Fox News is the creature of Roger Ailes, the jolly face of the Nixon gang, and Gibson and all of the other spewing heads on that network are his minions and nothing more. The Rev. Sun Myung Moon was among the last and most bitter defenders of Nixon, whose brainwashed "Moonies," just as obedient as any Fox anchor, stepped lively whenever they were ordered to demonstrate against impeachment on the steps of the Capitol.

Despite the right-wing regression to such ugly tactics against Clinton and Obama, there was a moment of hope as well. Rather than simply repeat the charges and rebuttals as if each bore equal weight, CNN sent an actual reporter to Obama's old school, who demolished the tale -- and at the same time, the news network emphasized that there was no evidence whatsoever linking Clinton to the attack. If such old-fashioned journalism is the template for campaign coverage this year and next, the dirty tricksters could soon face the unforgiving scrutiny they have always deserved.