Bring the pain! From "Knights of Prosperity" to "Rules of Engagement" to "The Winner," how much agony will the midseason sitcoms bring you? 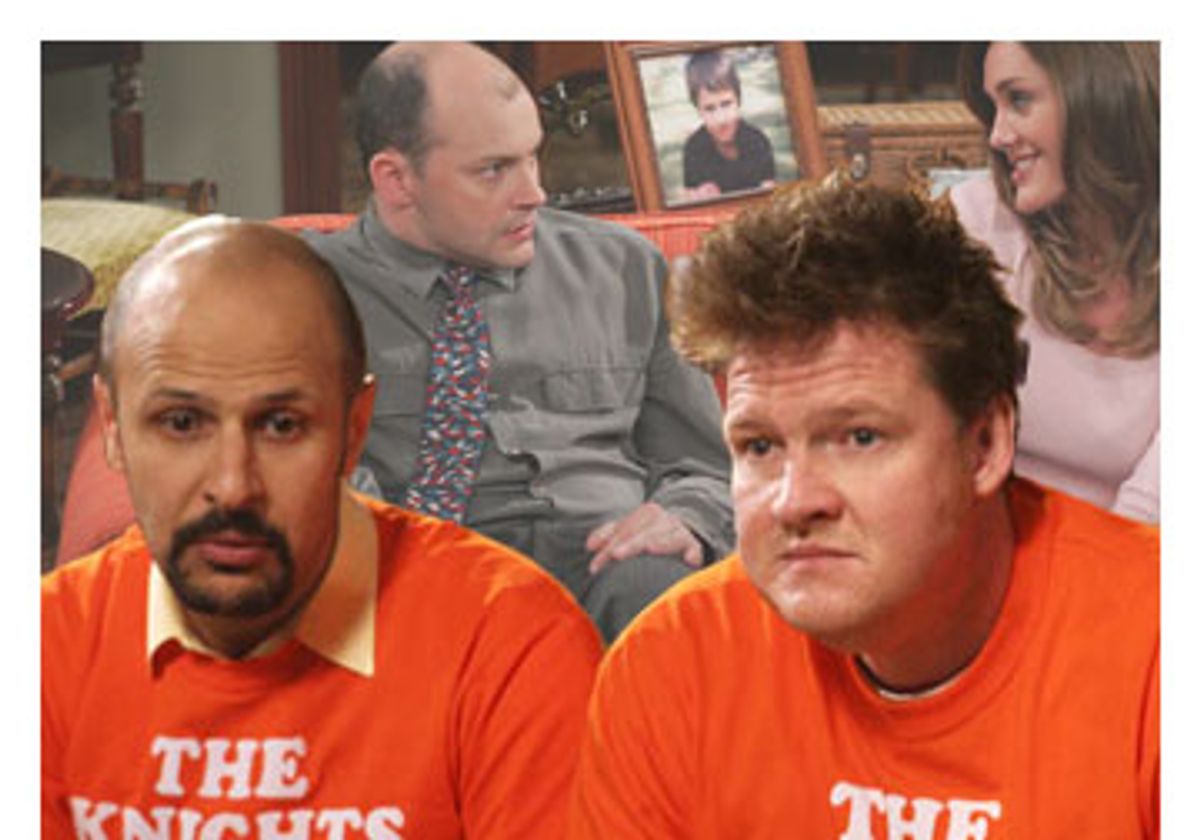 I've said it before, but it bears repeating: TV comedies are usually not very good. And unlike procedural dramas that aren't very good or nighttime soaps that aren't very good, comedies that aren't very good are almost impossible to watch. Like a pair of ill-fitting pants or a tour guide with something stuck in his teeth or windshield wipers that just barely work, bad comedies don't simply fail to function, they torture you with their badness. Each failed attempt to make you laugh not only disappoints, it hurts ever so slightly.

Adding to the pain is the deeply depressing sound of that empty-headed fraudience chuckling away over the worst jokes in the world. The mind abandons whatever thin narrative is unfolding on the screen for much more alienating thoughts like, "How could those people laugh at something so stupid? What awful taste they must have!" and then: "What other bad things must those people enjoy?" (The answer: Applebee's Riblet platters, Adam Sandler movies, enormous blow-up Santas, cars with gigantic woofers that rattle the intestines of everyone within 50 feet.)

To be clear, I'm not talking about so-called low culture. Everyone knows that lots of supposedly trashy things are actually divine: the bright orange glow of instant macaroni and cheese; the packed Megaplex on opening night; the delirium brought on by playing "Grand Theft Auto" on a truly impressive home entertainment system; the untold joys of an onion the size of a human head, covered in thick batter and chili powder, boiled in animal fat and served on a platter by a remorselessly upbeat teenager with a fake Australian accent. These are the delicious indulgences of mainstream pop culture, the kinds of things that make most of us damn proud to be Americans.

Good comedy, like a good fried onion, unites us. When we laugh out loud together, we share a good experience with total strangers. Conversely, when everyone else is laughing and you're not, you realize suddenly that you're all alone in a world full of morons. So watching shitty sitcoms is an exercise in alienation -- not just for snotty little superior weenies like you and me, but for people of all stripes across the country. When freaky actor meat-puppets spout worn-out clichés parading as jokes, it gives me the same sinking feeling that I got one day when I spotted one of those "Remember our troops!" ribbon magnets people put on their cars, but instead of reminding us of the war in Iraq or breast cancer, it said, "I (Heart) Softball!" That's right, a ribbon magnet for softball. So the message is ... never forget that I love softball? A sticker of Calvin of "Calvin and Hobbes" taking a piss makes perfect sense, compared to that one.

Bring the pain!
The sad fact is that, while TV dramas seem to grow more and more sophisticated and well-written each year, sitcoms remain stuck in prehistoric times, with stereotypical characters cracking jokes that would make your grandmother roll her eyes and squirm. True, a few comedies break free of the mediocre mold each year: "The Office," "Weeds" and "30 Rock" offer some proof that funny TV writers still exist somewhere out there. So why don't the others wise up and copy from the pros? Well, sadly, you can copy the characters, the situations and the tone of a good comedy, but you can't copy the funny.

Ironically, the really bad jokes, flat characters and idiotic stories on most sitcoms are just misused copies of a show that actually worked, because it was written by people who were funny -- or more important, people who at least knew what wasn't funny. While there will always be a limited supply of such humane TV writers who manage not to injure the general public with hurtfully stupid punch lines, there will never be a shortage of mercilessly mediocre TV writers who shamelessly inflict their flaccid, unfunny sitcoms on the world -- and get paid handsomely for it.

For accuracy's sake, then, most TV comedies should be rated not based on how funny they are, but on how painful they are. Forget four stars or thumbs up or down -- it makes much more sense to use one of those pain scales that they show you in the hospital -- you know, the ones that go from zero to five, with little smiley and frowny faces, so you can describe to the doctor how much pain you're in?

Zero, the least amount of pain, has a smiling face. Two is a neutral face with a straight line for a mouth, meaning, "This isn't great, but I can handle it." Three is the face you make when you're about to eat a few more Advil than the bottle recommends. Four is an extreme frown that clearly means, "My morphine button isn't working, damn it!" And five is a weeping, desperate, frowny face, the face of a person who's capable of violence against a complete stranger, if that's what's necessary to secure an adequate supply of Percoset.

Which sorts of jokes can cause that kind of pain? And which characters and situations might scar you permanently, while others leave you relatively unscathed, but with a hankering for a strong drink?

Like the double takes and misunderstandings of "Three's Company" or the snappy comebacks of "What's Happening?" each year there's a brand new slew of painful tricks up the lame sitcom writer's sleeve. Here's how our scale works, and how it corresponds to some of the painful "comic" elements in circulation today.

Annoying Elements of the Typical Sitcom and Their Corresponding Pain Ratings