The bunny vs. the blue box

Annie's Homegrown Macaroni & Cheese is the pantry staple of harried, organo-hipster parents everywhere. But is it any healthier than the day-glo noodles of our white-bread childhoods? 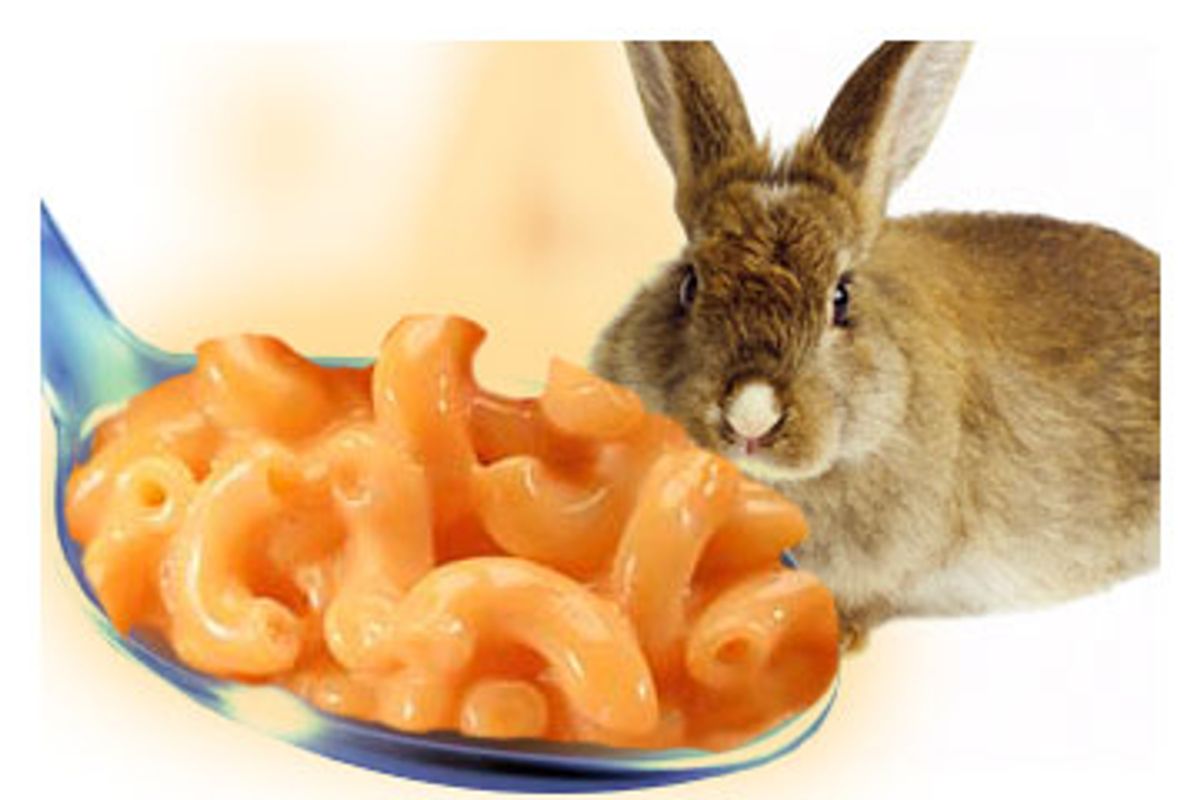 In the pantheon of brands that have infiltrated our children's hearts and minds, one is particularly dastardly. No, not McDonald's, with its high-fat, high-salt finger foods, its inescapable bribe-vertising campaigns (free Teenie Beanie Baby!) and the economic biceps to reupholster whole swaths of the globe in russet potatoes. Not Coca-Cola, with its negative-nutritional-value product and supersize sugar delivery system for a world already a-waddle. No, I refer to the organo-hipster mama and papa's most faithful friend and constant kitchen companion, Annie's Homegrown.

Not the Annie's that is a leader of the natural foods movement, a supporter of environmental causes and a parent's painless answer to the question, "What's for dinner?" The Annie's that partners with the PBS program "Arthur" to promote literacy and reading and distributes free hippie-dippy bumper stickers that say "Be Green" and "Stand for Peace"? The Annie's whose founder lives on a 100-acre organic farm with her two daughters, her farmer husband and a bunch of bunnies, for God's sake?

Annie's Homegrown Macaroni & Cheese has pretty much achieved world domination -- at least if your world is populated by the chronologically challenged. Refueling Gabriel, Rebekka, Isaac and Yazmin after a grueling toddler networking session? The well-stocked mom breaks out the Annie's. Three-course dinner with (mucho) wine for the grown-ups? A batch of Annie's keeps the little dears quiet. Rustling up some grub after a round of African drumming and lacrosse practices? Boil water. Grab Annie's. But while there's nothing wrong with food that appeals to kids and is easy to prepare, do we parents really have the right to feel so damn smug every time we open the little purple box?

For starters, just who are Annie Withey and the company behind her, Annie's Homegrown? When she posed for the (now-defunct) magazine Organic Style, she looked nice enough in her jeans, T-shirt and thick braid with a neo-feminist gray forelock. But it may interest you to know that she is the bona fide evil marketing genius, inventor and chief branding officer of not one, but two, packaged-food superstars: our beloved Annie's Homegrown and Smartfood popcorn, that breakaway snack hit of the 1980s.

The Smartfood creation myth revolves around a newlywed brandishing a spoon, a little slip of a thing who has a eureka! moment at the kitchen stove and invents her very own white cheddar cheese powder. In less capable hands, that probably would have been the beginning and end of the story. But in addition to her ingenuity with edibles, Annie has marketing mojo -- in spades. The Smartfood bag -- a sleek black number sporting that ubiquitous Yuppie superlative "premium" -- channeled Reagan-era zeitgeist, yet stood out from the crowd. A handful of early adopters moved so many packets of the cheesy tidbits that stores couldn't keep them in stock. Short story short: In 1989, six years after its founding, Smartfood was sold to Frito-Lay for $15 million.

Annie Withey's share of the loot is estimated to have been about $1 million. Quite enough to retire early to a Vermont subsistence farm or start an eco-tourism camp in Costa Rica or just live modestly in Ithaca, N.Y., for a decade or two, if you go in for that kind of thing, which Annie obviously didn't. Instead, she strode right back into the ring with the cap'ns of industry. Reinvesting her earnings, she exploited existing assets, developing a value-added product that, had she still been part of the Smartfood management team, would have been considered a brilliant line extension. Yep, that's right, she found a new use for her white cheddar powder: instant mac 'n' cheese. Other entrepreneurs might have trembled at the thought of going mano a mano with King Kraft. But not our Annie.

With a daintily moistened forefinger, Annie tested the direction of popular culture and felt the gentle wind of organics blowing. Her new pasta convenience meal would be labeled "totally natural" (mind you, this slippery '70s term has never had an official definition) and banish all ingredients ending in -ate, -yl and -one (at least those that aren't a constituent of another ingredient, which, as long as they are Generally Regarded As Safe (GRAS), are not required by the FDA to be listed on the label). The goods would be wrapped in an eye-assaulting purple box adorned by one nauseatingly cute rabbit, aka Bernie the bunny -- cuddly design courtesy of Thomas J. Paul Inc., whose other accounts include such counterculture icons as M&M's, Ritz and -- wouldn't you know it? -- Kraft. The launch was studiously aw-shucks: Annie and cohorts tossed packages at ravenous skiers in resort parking lots. "If you like the product," they said coyly, "don't tell us. Ask for it at your grocer's." Up, up and away it went! By 2005, Annie's Homegrown was selling over $34 million a year; still a gnat in the eye of King Kraft, but a gnat that rules the organic convenience-meal category.

Annie's stinks. Ever caught a surprise whiff as you guide stove-top traffic at dinnertime? (Right rear pot cleared for takeoff. Climb to avoid hot and high left front.) The stuff is rank; think sweaty T-shirt marinated in a gym bag for a week. Yet kids, whose palates are usually so delicate, lap it up. Which leads one to wonder, what's in those little hare-festooned envelopes anyway? Heroin? As a matter of fact, it's pretty much the same thing that's in the famous blue box: pasta, cheese, milk, salt. Granted, Annie's has only nine ingredients while Kraft has 20, most of which, nasty as they sound, replace nutrients removed in processing or are naturally occurring and have a long history as additives. Just two Kraft ingredients raise the mercury on the toxic-meter: yellow dyes No. 5 and No. 6, which impart the infamous fluorescent hue.

But from a nutritional perspective, that's the only time Annie's lands a punch. The rest of the match is a draw. Annie's has the same number of calories (Annie's 270, Kraft 260), the same amount of sodium (Annie's 550 mg, Kraft 580 mg), protein (Annie's 10 g, Kraft 9 g) and fiber (Annie's 1 g, Kraft 2 g), and a bit more fat (Annie's 4.6 g, Kraft 2.5 g) and saturated fat (Annie's 2.5 g, Kraft 1 g). But, you sputter, grasping at your last, best argument, "Annie's is organic!" Not so fast, my friend. Only packages labeled organic are organic. Annie's are labeled "totally natural," which means, uh, which means ... whatever you want it to mean, boys and girls! But it sure sounds good, doesn't it? (Obviously aware that its reality lags behind the rhetoric, Annie's has now begun retrofitting its recipe to include mostly organic ingredients.) Still, the truth is that Annie's is hardly healthier than the day-glo orange mac 'n' cheese of the white-bread America of yesteryear.

OK, you whimper, maybe it's not bulgur and lentil loaf, or salmon and spinach or even a peanut butter sandwich on whole grain bread, but Annie's Homegrown offers an important advantage for my family. It's easy. Very easy. And I need easy. After all, I'm A) a Very Important Professional racking up 60 billables weekly, B) an at-home ma/pa who can barely toggle the remote at the end of the day, or C) working through some culinary deficits (can't heat water to 212 degrees F). So sorry to spoil your party. But making pasta with cheese from scratch is just as easy as mixing up a pot of Annie's. Shall we give it a whirl?

OK, you caught me! There is one more step to the homemade: grating the cheese. But dare I say we're talking Food Prep 101 here, a skill slightly above stirring and definitely below chopping. And if you really want to get fancy and actually cook something, you can make a white sauce so the cheese doesn't clump. This forgotten kitchen art is so simple, an 11-year-old child can master it. A white sauce has infinite other applications, including that timeless WASP delicacy, chipped beef on toast. (For the more recherché among you, substitute prosciutto and blanched asparagus.) Or use it as a base for a "cream of," as in cream of asparagus, cream of broccoli, cream of celery, cream of fennel and on through the vegetable alphabet.

Annie's Homegrown out-bads McDonald's and Coca-Cola because it plants a corporate beachhead right there in your family's kitchen. Every time you reach for the rabbit, you're delivering the message that the almighty brand trumps Mom or Dad's efforts any day of the week. So, stand up, please, and receive a heartfelt thank-you from the American food industry. Where would they be without the culinary passivity and anesthetized palate you are so assiduously cultivating in the next generation?

Annie's entry into full-blown brand-dom can be charted at the supermarket. In November, Withey's company acquired its doppelgänger, Annie's Naturals, whose line of salad dressings and Bar-B-Que sauces is also a health food store staple. There is now a whole shelf full of Homegrown products -- mostly pasta-themed, although recently the company has detoured into the unabashedly unhealthy with a grab for the Goldfish market. There is simply no way to get a child past this section with its hundreds of Joe Camel-like logos beaming come-hither messages, unless you forcibly hold his or her head in the other direction.

My personal battle with Bernie & Co. is already lost. Take a peek in my cupboards and you'll find a couple of boxes of Annie's Shells & White Cheddar (the original), or one of the many other cheesy iterations (Curly Fettuccine With White Cheddar and Broccoli Sauce, D. W. Whole Wheat Pasta & Alfredo, Microwavable Mac & Cheese Meals, etc.). But while I've surrendered on the instant pasta, for principle's sake, I feel I need to draw the line somewhere. I swear, not a single Annie's Cheddar Bunny will cross my threshold. Or Bunny Graham. Or Bernie O. Or Organic Cheeseburger Macaroni Skillet Meal. Do you think we can get them to sign a nonproliferation treaty?

Melt butter in small frying pan over medium heat. Add flour and whisk until a smooth paste is formed. Add a tablespoon or so of milk and whisk until smooth. Repeat process until desired consistency is reached. For cheese sauce or as base for soup, this should be somewhere between ketchup and heavy cream. Remove from heat.