After Carnival, soccer and samba, go deeper into this South American nation via its seductive novels and gritty true-life stories. 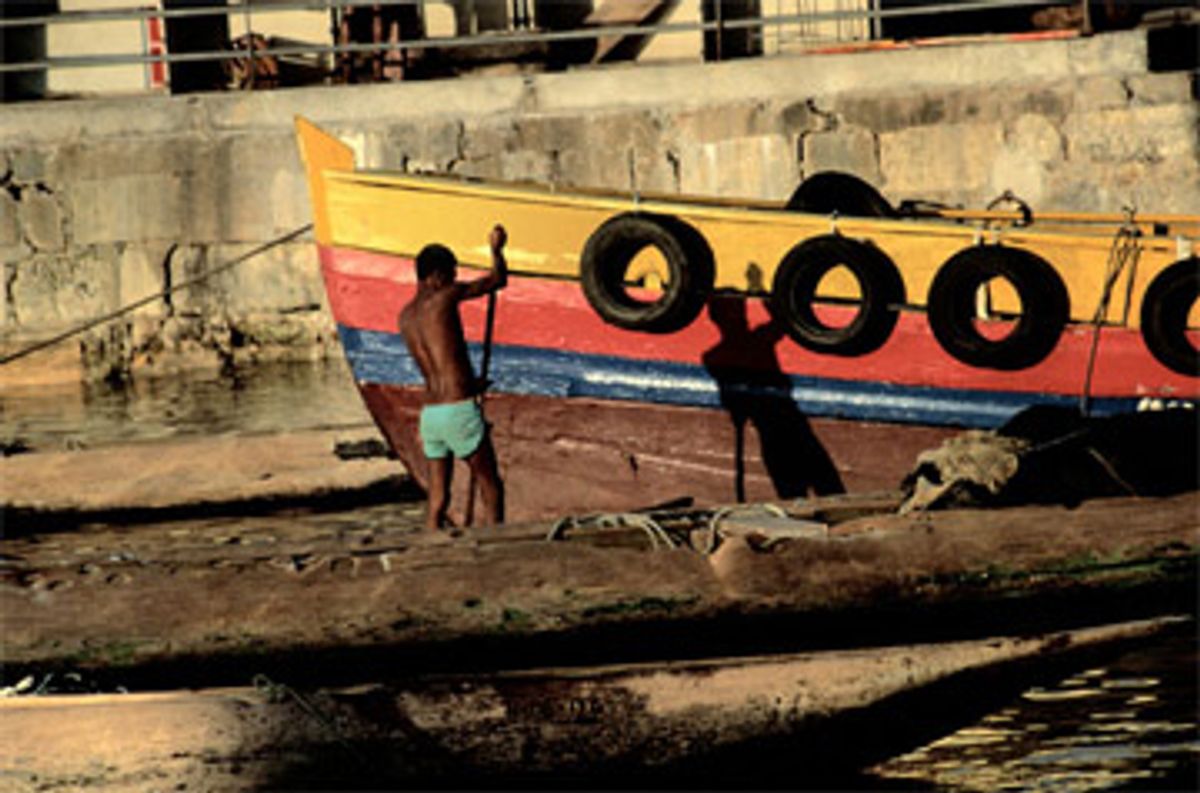 Where do you start with Brazil, that massive, sprawling swath of South America, a republic founded in 1889 on the principle -- or fantasy -- of "order and progress," but forever caught between crashes and calamities, coups and dictatorships? (In 1961, Time magazine wrote that Brazil's mercurial new president, Janio Quadros, had "burst on the world like Brazil itself -- temperamental, bristling with independence, bursting with ambition, haunted by poverty, fighting to learn, greedy for greatness.") What to make of the national "myth of racial democracy," the poverty and favelas, the prison riots, the burning Amazon, the new world rising in Brasilia, the population exploding in São Paulo? And what about samba, Tropicália, Cariocas, Carnival and soccer? Yes, soccer: the "beautiful game," the uniquely Brazilian ballet that gave the world Pelé, Garrincha, Zico, Socrates, Romario and Ronaldinho? And what about Lula, the Landless Movement, Chico Mendes, Sonia Braga and Rio's dreaded City of God?

I could go on; clearly, when it comes to Brazil, I suffer from a case of mental and sensory overload. I first went there in the summer of 1986, for a graduate-level course at the Catholic Pontifical University in São Paulo, a four-week seminar on U.S. and Brazilian social history and politics. Two decades of military dictatorship were beginning to wind down, though I can't say I noticed much beyond the classroom and the caipirinha-fueled excursions to samba clubs at night. I did, however, absorb something of the country's complex past: the Portuguese colonial rule; slavery, and the plantation economies built on sugar and coffee, rubber and cacao; the saga of its immigrants -- Lebanese and Syrians, Italians, Germans, Eastern European Jews, and Japanese; the blending of indigenous Indians, blacks, whites and every complexion in between.

After my class, I traveled a bit -- to the coast to Santos (where Pelé had played his club soccer), up to Belo Horizonte and, finally, Salvador de Bahia. Along the way, I had my share of adventures: I was mistaken for an Argentine drug-runner in Santos; I spent a night sleeping out on a bench at the Belo Horizonte bus station; I met a transvestite somewhere along the way who took me to her one-room shack (it's hard to remember -- really). And I arrived in Salvador just in time to experience a minor riot, with tanks rolling through a central plaza. But it wasn't until five years later, after a short vacation carousing in Rio with a friend, that my fascination with Brazil was rekindled and I vowed to seek a deeper connection to the country through its literature. (Needless to say, that trip had been eventful, too: There was the near drowning episode at Ipanema; the snatched passport; the infatuation with "Laura," an erotic dancer at a Copacabana club called Barbella's.)

Jorge Amado, Brazil's most celebrated novelist, was, like the country, larger than life. His novels ("Gabriela, Clove and Cinnamon" and "Dona Flor and Her Two Husbands" were reissued this past fall by Vintage; "Tent of Miracles" and "Tieta" in 2003 by University of Wisconsin Press) burst with energy -- rollicking, robust, earthy tales from the northeast port cities of Ilheus and Salvador, of worker strikes, rubber booms and busts, and mulatto beauties. (The film versions of "Dona Flor" and "Gabriela," incidentally, are classic '70s softcore fare, starring the sumptuous Sonia Braga.) Amado, embraced in the U.S. during the Latin boom era of the '60s and '70s, had been pumping out hardy, proletarian-style novels since the '30s, though by the '50s they had turned more comic, lighthearted and bawdy.

The late-19th-century author Machado de Assis wrote stylish, whimsical portraits of modern bourgeois life that made him a literary phenomenon of his time (his novels were often first serialized in popular women's magazines). Machado de Assis is an original -- witty, erudite, deft and acrobatic, and endlessly inventive. You'll be won over instantly by his "Epitaph of a Small Winner" (1881), republished in 1997 as "The Posthumous Memoirs of Brás Cubas" by Oxford University Press, and translated by Gregory Rabassa -- a titillating, quasi-philosophical reckoning on a life of missed opportunities, narrated from beyond the grave by the eccentric Brás Cubas himself. De Assis' novels cleverly anticipated the mental games and mazes of major 20th-century writers like Borges, Cortázar and Kafka.

Speaking of Kafka, equally bewitching is the Brazilian-Jewish writer Clarice Lispector, whose modernist, heavily metaphysical works have often been compared to those of the Czech master himself. Lispector, who immigrated to Brazil from a Ukrainian shtetl in 1920 when she was just 2 months old, wrote some of the most lively, raw and dizzying internal soliloquies of the past century. "I shall be as light and vague as something felt rather than understood, I shall transcend myself in waves, oh God, and may everything come and fall on me, even the incomprehension of myself at certain blank moments," she rhapsodizes in her first novel, "Near to the Wild Heart," "for I need only fulfill myself and then nothing will impede my path until death-without-fear; from whatever struggle or truce, I shall arise as strong and comely as a young colt."

"Near to the Wild Heart," published in 1944, is studded with pure, gemlike epiphanies of a young girl's coming-of-age, loveless marriage, and wrested moments of self-discovery. "The Hour of the Star," released just before she died of cancer in 1977, is a heartbreaking tale of Macabéa Cubasa, a lonely, anonymous typist from the northeast, lost in the hustle and rush of Rio. Even more achingly personal are Lispector's "Selected Cronicas" and "The Foreign Legion," which collect her short, flights-of-fancy newspaper dispatches, written between 1967 and 1973. Lispector's cronicas are a combination of sketches, meditations and portraits, penned as the mood hit her -- oblique, almost clairvoyant observations on such subjects as food and travel, motherhood, race, flowers and writerly states of grace.

Lispector, who was raised in the north in Recife before moving to Rio as a teenager, is often criticized for restricting herself to a very cloistered, white, middle-class milieu. (Black maids and cooks do make appearances and, particularly in her cronicas, Lispector can be seen straining to read their thoughts.) But a whole other side of Rio explodes off the pages of Paulo Lins' novel "City of God," a sweeping, gritty, shoot'em-up accounting of three decades in the life of one of the city's most notorious favelas, or slums. Published in Brazil in 1997, "City of God" was a labor of love for Lins, an urban anthropologist who grew up in the neighborhood himself -- an exhaustive study that morphed into a novel, became a bestseller in Brazil, and then came to international attention as the acclaimed 2002 hit film by Fernando Meirelles.

Based on stories from Rio's grim underbelly -- as the drug business spiraled into violent turf wars in the '80s -- "City of God," the novel, reads more like a news flash, a bulletin from the front lines of Brazil's social ills. Peter Robb's "A Death in Brazil," part travel memoir, part current affairs chronicle, arrives in a similar vein, but is chock-full of digressions on national dishes, drinks and folklore, while still managing to cover the historical legacies of fugitive slave communities and the Landless Movement, the sordid fall and impeachment of Fernando Collor, and the rise, stumble and rise again of Lula da Silva, Brazil's current president. Alma Guillermoprieto's "Samba" (1990), meanwhile, sways along with the crowds right into the middle of Carnival preparations with the Mangueira samba school of Rio, offering still another glimpse of the overlapping worlds of crime, drugs and poverty, as well as the irrepressible spirit, of the City of God.

At the nexus of music, art and politics, on the other hand, is Caetano Veloso's memoir, "Tropical Truth: A Story of Music and Revolution in Brazil" (2002). Veloso, the honey-voiced wonder at the heart of the Tropicália movement of the late '60s, writes passionately and intelligently of those heady days -- the anthemlike songs, the collaborations, the protests, the culturally omnivorous and bohemian spirit (even of his poignant encounters with the reclusive author Clarice Lispector). He also writes of the military's crackdown, his two months in prison and exile in London, as well as the shimmering cast of other artist-iconoclasts of Tropicália: Gilberto Gil (now minister of culture), Gal Costa, Maria Bethania and Chico Buarque, among others. (Buarque, by the way, is also the author of several Kafkaesque novels of his own -- most recently "Budapest" (2003), a wordy, cerebral tale of a Rio ghostwriter haunting the streets of the baroque Hungarian capital.)

But, finally, no portrait of Brazil is complete without at least an attempt to fathom the national sport -- to surrender to it, exult in it, be transported by it. Take Alex Bellos' "Futebol: Soccer, the Brazilian Way" (2002). In the lead-up to the 2002 World Cup, Bellos, a British foreign correspondent, immersed himself in the game's culture as a way into the Brazilian psyche: He travels to Brasilia and the Amazon to catch matches; he attends monster-car soccer rallies; he makes a pilgrimage to the dirt-poor hometown of the gifted but self-destructive dribbling wizard Garrincha; he investigates allegations of fixing and fraud in the Rio big leagues; and he marvels at the sheer pull the sport exerts over the country's collective self-image. Transcendent beauty, as well as pathos and a mass of contradictions -- it's all there: in the feverish rush of Lispector, the hypnotic voice of Caetano, the pirouettes of Ronaldinho. What more can you ask for from one country?