The power of King George

This week Bush made another executive power grab -- and our own Constitution is largely to blame. 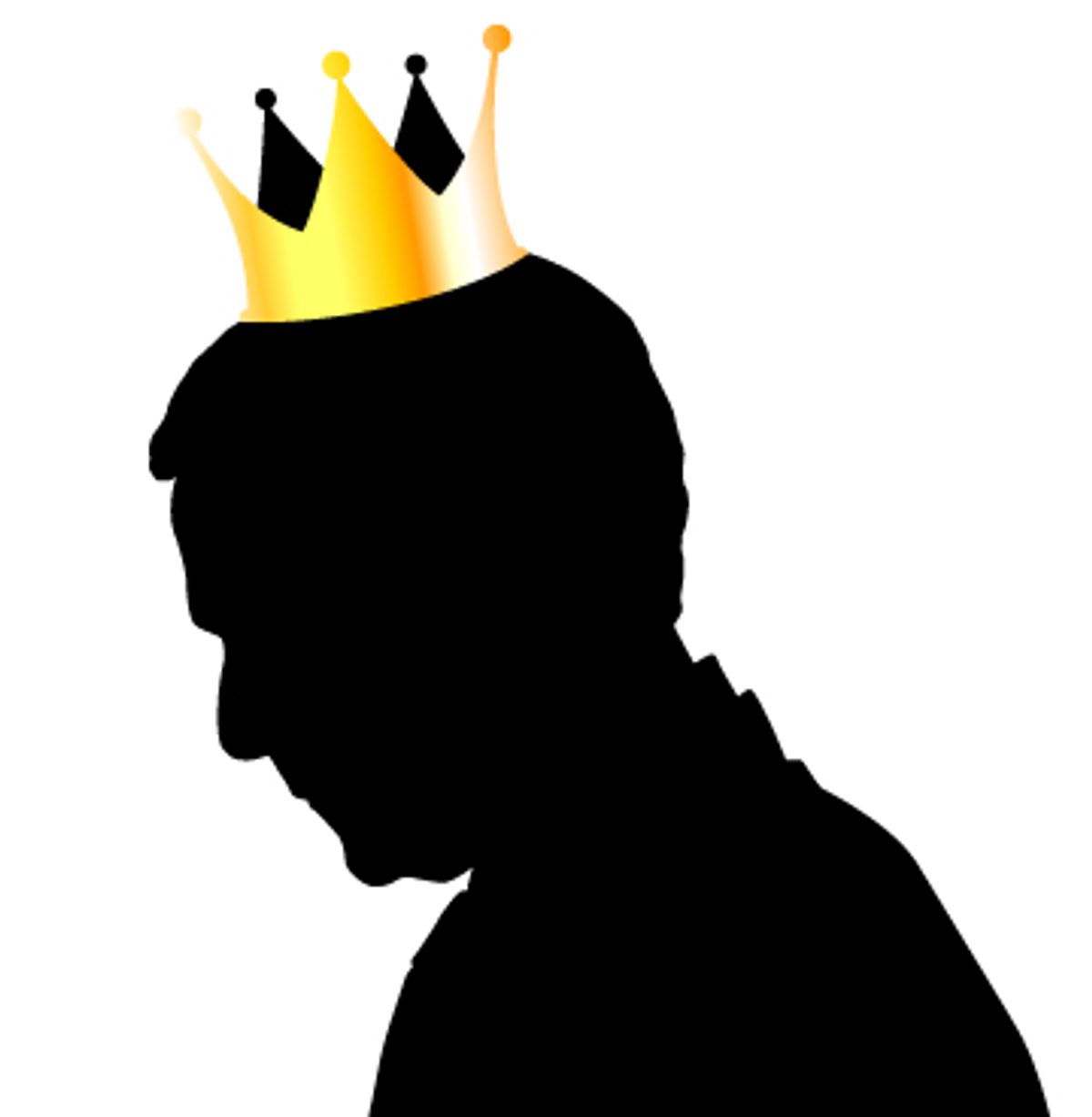 Washington was treated to a curious American spectacle on Monday. A president repudiated by virtually every sector of the political system has responded by arrogating more power to himself.

Under the executive order Bush signed Monday, federal regulators will answer to a new set of Bush appointees in each agency, who will determine whether their proposed rules properly serve the Bush agenda. As Peter Strauss of the Columbia Law School told the New York Times, "Having lost control of Congress, the president is doing what he can to increase his control of the executive branch."

Bush's administrative power grab points to a serious flaw in the American system: our uniquely powerful, politically unaccountable executive. Americans take this system for granted -- we are taught in high school that it was designed by far-seeing statesmen. We seldom even notice how often it misfires, with results ranging from opera buffa (like the Clinton impeachment) to dangerous constitutional crisis (like the Nixon impeachment).

Crisis is what we are facing now. Public opinion has decisively turned against the president's war in Iraq, with voters dissenting where our system says they should -- at the polls. Congress, the supposed locus of the power to "declare war," is belatedly registering its disapproval of Bush's inept conduct of that war. Even the normally secretive military and national-security bureaucracies are busily signaling their objections to the commander in chief's plans.

In virtually any other advanced democracy in the world, government personnel and policy would by now reflect this political earthquake: Either the chief executive would have resigned, or the parties would have coalesced in a government of national unity. But here, the repudiated leader is escalating his war and proclaiming, "I'm the decision maker." Regarding Congress, Bush said during a recent "60 Minutes" interview, "They could try to stop me from doing it. But I made my decision, and we're going forward." And now the president appears to be barreling toward a confrontation with Iran.

Americans are taught that our Constitution provides a legal answer for every political ill. If Bush is acting undemocratically, what he is doing must surely be unconstitutional. Adam Cohen of the New York Times recently assured editorial page readers that "the Founders, including James Madison, who is often called 'the father of the Constitution,' fully expected Congress to ... rein in the commander in chief." Perhaps, but no matter what they expected, the document they wrote gives the president more cards to play than Congress in most situations, particularly in the war-and-peace game. Congress can declare war, but the text says nothing about halting wars in progress. And the president is commander in chief of the armed forces without limitation on the circumstances or purposes of their use. Once the bullets are flying, Congress can dither, but the president acts.

In 1846, President James K. Polk ordered American troops into a part of Texas claimed by both Mexico and the United States. When Mexican troops attacked them, Polk demanded and got a declaration of war on the grounds that Mexico had started it. At the outset of the Civil War, Lincoln unilaterally proclaimed a blockade on the seceding states and raised an army (a clear congressional power) without any authorization. Afterward, he all but dared Congress to disavow his acts, which it did not. Harry Truman refused to ask Congress for any authorization for the war in Korea, claiming that the U.N. Charter empowered him to use U.S. troops there as he saw fit. Bill Clinton did the same thing in Kosovo, relying on a vote of the North Atlantic Treaty Organization. Both the Bushes consulted Congress before their Gulf wars -- but both also publicly warned that they would simply ignore a "no" vote.

The framers had attempted to design something the world had never seen before: an elected chief magistrate for a self-governing republic. The major models they had before them were high-handed monarchs on the one hand and the relatively impotent governors of the states on the other. We shouldn't be surprised that they got almost everything about the presidency wrong. But if the presidency were a car, Americans would be asking for their money back. It's hard to start, hard to steer -- and nearly impossible to stop.

To begin with, the framers invented the worst system imaginable for electing a president: an electoral college, designed to protect the political influence of the slave states, that first misfired in 1800, created crises in 1824 and 1876, and most recently paralyzed the country in 2000.

Next, they gave the president a fixed term of office and made it all but impossible to get rid of one who is no good at his job. Impeachment by both houses of Congress seems to be reserved for cases of near-criminal conduct, and there's no equivalent remedy for incompetence or political bankruptcy.

Finally, they drew the line between presidential and congressional power in such ambiguous terms that the president became, over time, nearly as powerful as, say, George III. The power to make treaties was probably intended to be shared; but from George Washington forward, presidents have signed and abrogated treaties at will. The president is to "receive ambassadors and other public ministers," seemingly a ministerial duty. Over time, this has been interpreted to make the president "the sole organ of the nation in its external affairs," with no role for the Senate but what the executive allows.

The expansion of presidential power came from aggressive reading of ambiguous text -- text that was not left ambiguous by accident. A number of the framers thought that the entire "republic" business was either a mistake or at best a dangerous gamble, and that a real king would be necessary sooner rather than later. Leading this charge was Alexander Hamilton, who told the Philadelphia Convention that "as to the Executive, it seemed to be admitted that no good one could be established on Republican principles" and that "the English model was the only good one on this subject." Hamilton favored an "elective monarch" who would serve for life and who would have an absolute veto on all congressional acts and "the direction of war when authorized or begun."

The text of the Constitution did not enshrine Hamilton's elected king. The document gave the president a four-year renewable term, permitted Congress to override his veto, and ambiguously divided the war power between the two branches. But Hamilton nonetheless had more to do with designing the office than did Madison or any other framer. As George Washington's secretary of the treasury, Hamilton was the creator of the "unitary executive" theory that Bush administration lawyers like to cite. With their own aggressive reading, Bush lawyers have argued, for example, that the president is the only member of the government authorized to interpret treaties; that the presidential treatment of prisoners of war and "enemy combatants" is unreviewable by any federal court; that the commander in chief power permits the president to order the warrantless wiretapping of anyone -- including American citizens -- as part of the war effort. John Yoo, the former Justice Department official now famous for his "torture memos," explained it thus: "The centralization of authority in the President is particularly crucial in matters of national defense, war, and foreign policy, where a unitary executive can evaluate threats, consider policy choices, and mobilize national resources with a speed and energy that is far superior to any other branch."

Yoo and his cohorts were simply channeling Hamilton. During the Washington administration, a crisis with France arose, and Washington proclaimed U.S. neutrality without consulting Congress. In an influential set of essays, Hamilton argued that the Constitution lodges in the president something called "the executive power" -- not the limited prerogatives numbered in the text (those, he said, were just examples), but the authority to do anything that any national executive could, "subject only to the exceptions and qu[a]lifications which are expressed in the [Constitution]."

Even the textual grant to Congress of the power to declare war, Hamilton argued, did not limit the president's power to order the military into hostilities; he could ask for war authority after the bullets began flying. At that point, "the Legislature is free to perform its own duties according to its own sense of them -- though the Executive in the exercise of its constitutional powers, may establish an antecedent state of things which ought to weigh in the legislative decisions."

And so it has gone since then. Presidents from Jefferson to Polk to Lincoln, from Roosevelt to Reagan, have taken military action unilaterally, notifying Congress after the fact -- and in essence daring it to disapprove. Cohen, in offering an optimistic view of Congress' power to limit presidential command authority, had to reach back to an obscure Supreme Court case from 1804 called Little v. Barreme. During the "quasi-war" with France, Congress authorized President John Adams to seize any American vessel bound for a French port; Adams had gone beyond the text of the law, ordering Navy ships to impound American vessels bound from French ports as well. Chief Justice John Marshall wrote that the seizure of a ship called the Flying Fish, sailing away from a French port, was thus unlawful, and that the captain who had seized her must pay damages to the rightful owner.

As a rebuke to the commander in chief, the case of the Flying Fish is thin gruel indeed. By the time it was decided, the quasi-war was long over, and John Adams was out of office. And Marshall carefully wrote in dictum that he believed that the president might very well have the power to seize any ship he wanted without any congressional authorization at all.

There's little wonder that Bush and his inner circle believe that Bush can do anything he wants in Iraq. If Congress disagrees, the Constitution gives it only two tools, neither very promising. It can cut off funds, but that puts it in the politically dubious position of punishing (and perhaps endangering) the troops for their commander's policy blunder. Congress can also impeach the decider, but that remedy has proved traumatic and paralyzes the government for months on end.

Beyond that, Congress may bluster, it may bluff, it may hold scathing hearings, it may pass symbolic resolutions -- but it can almost never stop the executive juggernaut the framers designed.

And that brings us to a final mistake the framers made: the fixed terms of office for the presidency. Even if you believe a "unitary executive" is a good idea, there remains no reason to allow one to remain in office after a catastrophic failure like Iraq. No coherent political theory justifies lodging the power of war and peace in a leader whose electoral mandate has dissipated. Failed presidents should resign after losing a popular vote of confidence, and the Constitution should provide an orderly means of succession in such an event.

The Iraq crisis will continue to absorb much of our energy; it may be the most dangerous clash among the executive branch, the Congress and the American people in our lifetime. Still, this crisis differs from others -- the Nixon impeachment, the 1995 government shutdown, the Clinton impeachment, the prolonged Florida crisis with the 2000 election -- in degree, not in kind. They all stem from serious design flaws in the Constitution. It would behoove us in the months ahead to spend some time designing changes in our system that will prevent such crises from happening over and over. The system of presidential election, inauguration and succession has already required no less than three amendments, and it still doesn't work very well. As Bush has proved to painfully sharp degree, more amendments may well be in order.