"Because I Said So"

Diane Keaton and Mandy Moore star in this movie about a meddling mom. 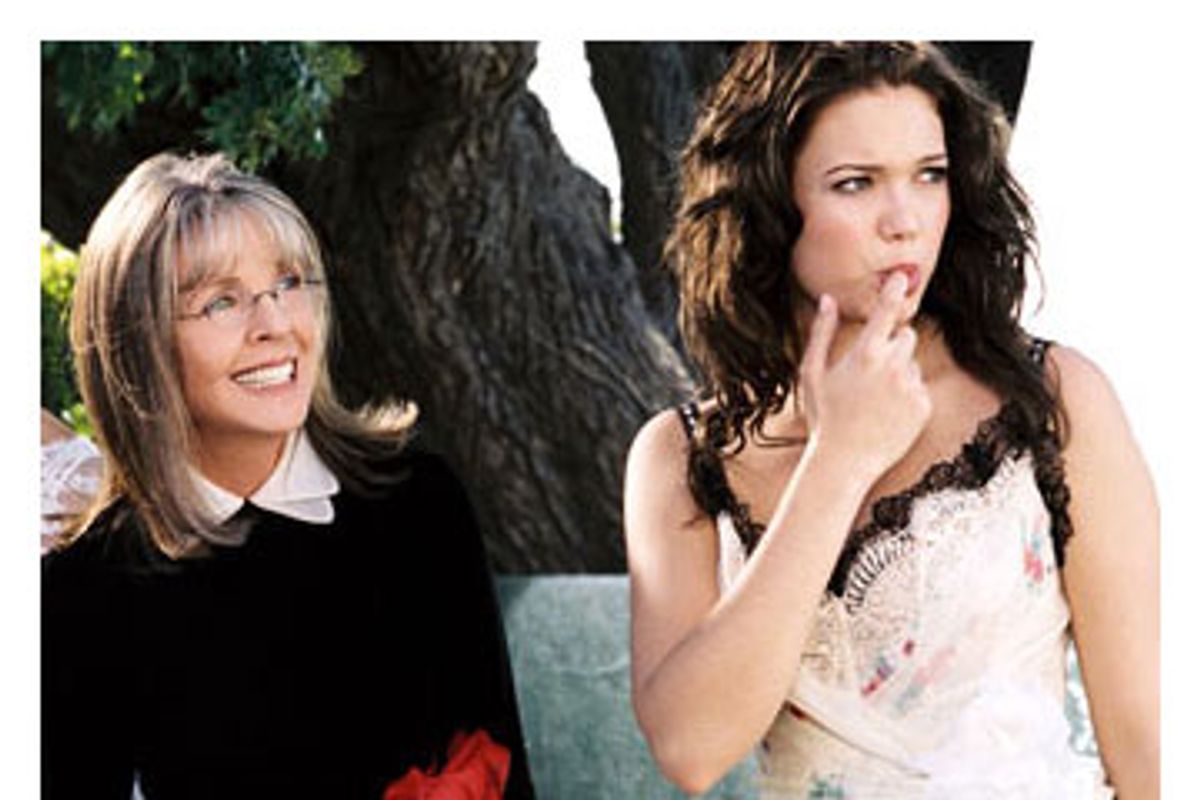 At the end of "Psycho," the authoritative shrink played by Simon Oakland tells us, "Matricide is probably the most unbearable crime of all." After sitting through Michael Lehmann's "Because I Said So," you might not be so sure. Diane Keaton plays longtime single mom Daphne, who's just about to turn 60 and who can't help meddling in the life of her youngest daughter, the shy and somewhat klutzy Milly (Mandy Moore), the only one of her three girls who remains unmarried. Apparently unhip to the notion of boundaries, Daphne seeks a mate for Milly by placing a personal ad and interviewing the respondents herself. Most of the candidates, with their mohawks and piercings, their allergies, their nervous tics -- montage alert! -- are aggressively unsuitable. But Daphne finally comes up with one she likes, a slick architect named Jason (Tom Everett Scott). Complications arise when charming but not mom-approved musician Johnny (Gabriel Macht) also begins vying for Milly's affections.

The tortured setup isn't what's wrong with "Because I Said So"; plenty of enjoyable movies are built on unapologetically stupid concepts. But Lehmann and the writers, Karen Leigh Hopkins and Jessie Nelson, overload the picture with ridiculous scenarios and stuff it full of dialogue no believable character would ever say. When Daphne and her daughters go shoe-shopping together (the other two women are played by Lauren Graham, whose rhythms and mannerisms are exactly the same as those of the character she plays on "Gilmore Girls," and Piper Perabo, who has about four lines and seems to have been cast just to play the vapid sexpot), it's a reasonably believable instance of mother-daughter togetherness. What isn't believable is the way they talk to one another in the shoe store: They lounge around on the store's fancy divans, examining this or that sandal or mule as they chatter loudly about orgasms and stuff. This appears to be the movie's idea of sexual freedom, a powder-puffy declaration of how groovy it is that we live in an era in which we don't have to be uptight about sex.

But this isn't freedom -- it's idiocy. People who talk noisily about their sex lives in inappropriate places are usually people from whom we want to flee, but "Because I Said So" presents its characters as cuddly and adorable. The movie also wrangles complicated situations into being and then nearly forgets to explain them. It's supposed to be a big surprise when we learn that Johnny is a single dad, and that his father (Stephen Collins) helps take care of the kid. But only several scenes later, after Milly has already bonded with both Johnny and the kid, do we learn why the mother isn't in the picture. The movie treats these kinds of explanations as afterthoughts, almost as if we're not supposed to care, or even be remotely curious.

Lehmann -- who somehow earned street cred with the smug, faux-sardonic "Heathers," in 1989, before moving on to truly revolutionary works like "Hudson Hawk" and "The Truth About Cats and Dogs" -- doesn't even bother to shape this admittedly bizarre material in any meaningful way. Most of the actors flop and flounder: You can almost smell their desperation wafting from the screen. Moore escapes unscathed: Her performance feels light and natural; she's one of the only effortless pleasures to be found in this movie's wound-tight universe. Remarkably, she even pulls off a nutso scene in which she describes to her mother what an orgasm feels like. (Yes, this is one of those movies in which an older woman's lack of enlightenment, her victimization at the hands of the patriarchy, is symbolized by the fact that she's never had an orgasm. To make this more believable, the writers should have given us a character who was born without fingers. Or access to batteries.) Moore isn't afraid to be goofy, but she's got innate dignity, too. That helps her survive lousy writing and directing -- although it's a shame that she should have to.

But the gravest sin of "Because I Said So" lies in what it asks -- or doesn't ask -- of Keaton. Keaton has always been a glorious non sequitur of an actress; her free-jazz rhythms aren't quirks -- they're the product of miraculously perfect timing. And to put it bluntly, she's also one of few actresses in her age group who hasn't mutilated her face in a desperate effort to stop the clock. Keaton, at 61, is lovely, as much for her carriage, her sense of style, and her confidence as for her admittedly wondrous bone structure. I loved looking at her in "Because I Said So"; I just couldn't stand watching her.

This is the second movie in a row in which Keaton has played an insufferable, judgmental matriarch. (The earlier one was "The Family Stone," although at least this time around, the movie mercifully spares her character the cancer diagnosis.) In Nancy Meyers' "Something's Gotta Give," Keaton plays a high-strung writer who must learn the lesson that fooling around with younger guys is fine, but in the end, it's best to stick with age-appropriate mates.

Keaton is better in both "The Family Stone" and, particularly, "Something's Gotta Give" than she is here. Daphne is supposed to be a lovable, madcap eccentric, a misguided mom with good intentions. So she chatters and natters, and in several sequences, she either falls down while carrying a big cake, or gets frosting smooshed in her face. (She's a professional baker -- I think. The movie never quite makes her profession completely clear.)

Keaton can't locate Daphne's center, perhaps because she doesn't have one: She's a collection of characteristics, not a character. And only a few minutes into the movie, watching Keaton's Daphne nag at her youngest daughter, even though we know she does so with love, becomes unbearable. Daphne has a weird bit of dialogue in which she reminds Milly, who's just about to have sex with a hot guy (again, this is the kind of movie in which the women tell one another everything, often via cellphone), that one of her breasts is larger than the other. Of course, in real life there are mothers who intentionally or otherwise undermine their daughters' self-confidence. But the movie treats Daphne's behavior as a harmless joke, even though the woman is really something of a monster. I don't know what Keaton could have done with this role; maybe her heart wasn't in it to begin with.

It's tempting to write off "Because I Said So" as just another dumb, bad comedy, made yesterday and forgotten tomorrow. But no matter how negligible this particular picture is, it's time to look a little deeper. If these are the only kinds of roles we can conceive for actresses who have grown into their faces, as Keaton has, it's no wonder so many younger performers are seeking the knife.