In the YouTube age, the motormouthed senator's not-so-clean comments may have already shorted out his '08 campaign. 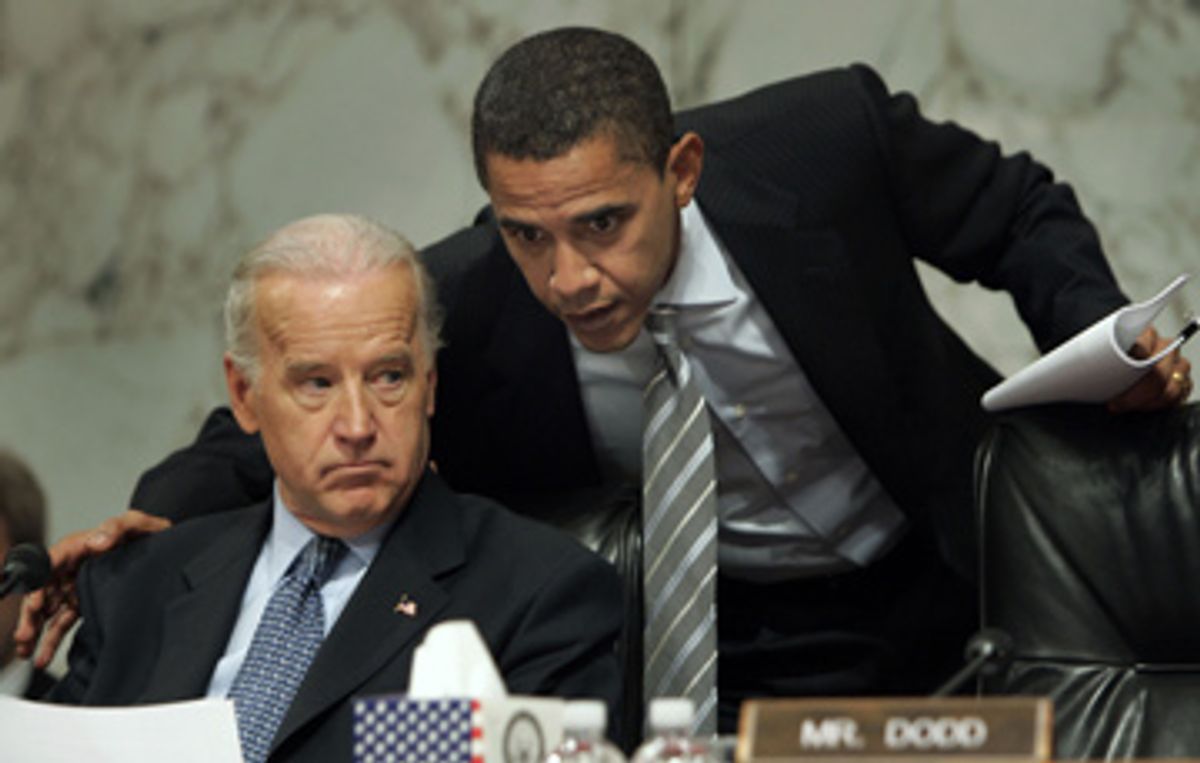 Short of publicly appealing to St. Jude, Sen. Joe Biden could not have more dramatically signaled his distress. Asked by Jon Stewart Wednesday night on "The Daily Show" about his ill-advised putdowns of his presidential rivals -- especially a racially patronizing comment about Barack Obama -- Biden, a Catholic, responded by crossing himself. Stewart's deadpan response: "By the way, he doesn't have jurisdiction here, so that's not going to help."

Thursday afternoon, continuing his self-abnegation tour, Biden appeared on Al Sharpton's radio show to express his "regret" over the way his comments were perceived, and to reiterate his "love" for the preacher turned perennial protest candidate.

For those who may have been off participating in a sensory deprivation experiment, the Obama remark -- which launched a thousand lips -- was embedded in an interview with the New York Observer, published Wednesday, the day that Biden released a webcast formally declaring his candidacy for the White House. Here is what Biden said about Obama (though the punctuation is subject to debate, as can be heard on the audio): "I mean, you got the first mainstream African-American who is articulate and bright and clean and a nice-looking guy. I mean, that's a storybook, man."

What may be the real storybook here is how quickly a presidential candidate can become a national laughingstock with 25 ill-chosen words. (Of course, former Sen. George Allen, once a strong prospective 2008 presidential contender, achieved the same result with just one word: "macaca." But then, Allen is terse with his slurs, while Biden is notoriously verbose.)

A symbol of Biden's predicament was that the Delaware senator could not decide which verbal sin warranted the biggest apology. He abjectly apologized to Jesse Jackson and Sharpton -- both prior presidential candidates -- for implying that they were not as "articulate and bright and clean" as Obama. Biden also gave contradictory explanations of what he meant by "clean," saying in a press conference that it was a shorthand for "clean as a whistle," and then insisting to Stewart and Sharpton that he was praising Obama's "fresh" ideas.

While a sports announcer these days would probably be admonished for calling a black athlete "articulate" (as if this were an unusual quality for African-Americans), Biden's punishment is likely to be cruelly meted out in the polls (where he is already a negligible factor) and in fundraising (where he faces a daunting prospect in corralling the $30 million that is a bare-bones price of entry into the 2008 race).

Biden, reflecting the occupational hazard of having spent more than half his life in the wind chamber of the Senate, is a classic motormouth who routinely speaks before he thinks. Yet, while Biden's remarks about Obama suggest a tin ear on racial matters, his liberal legislative record -- as Sharpton testified -- points in a completely opposite direction.

What, then, is the proper way in presidential politics to weigh off-the-cuff words against deeds? This is a serious question in an election cycle in which YouTube may emerge as a dominant communications tool -- both by allowing candidates to speak to the voters free of the constraints of 30-second TV spots and by spreading at warp speed embarrassing candid-camera campaign moments.

Two long-ago campaign gaffes, involving Jimmy Carter in 1976 and Ronald Reagan in 1980, illustrate both the risks and the rewards of constructing an elaborate character analysis based on a few words that may -- or may not -- reflect the candidate's deepest beliefs.

Having soared to the front of the Democratic presidential pack in storybook fashion, Carter, then a one-term former Georgia governor, stumbled badly when he said that he had no objection to neighborhoods preserving their "ethnic purity." Against the backdrop of the civil-rights struggle and the battle over mandatory school busing, Carter's maladroit use of the two-word phrase "ethnic purity" convinced many Northern liberals that on racial matters he was, at heart, still an old-fashioned Southerner.

What followed was a frenzied debate over whether the front-runner for the Democratic nomination was, to put it bluntly, a racist. Carter was saved by testimonials from Atlanta-based black leaders like Andrew Young. In hindsight -- given both Carter's record as president and his post-White House career -- the furor was irrelevant, demeaning and absurd. But it underscores the ease with which a presidential candidate can be demonized by his word choice.

(Department of full disclosure: I worked as a spear carrier on the 1976 Carter campaign and later became a White House speechwriter for him. But the "ethnic purity" flap occurred before I signed on with his campaign.)

Four years later, running for president against Carter, Reagan blurted out his informed scientific judgment that trees cause more pollution than automobile exhaust. Even back in the days before polar bears were thought to be imperiled, Reagan's comments touched off a firestorm hot enough to melt the ice caps. They also fit neatly into a larger pattern of breathtaking environmental ignorance by the former California governor, since Reagan had also claimed during the campaign that oil slicks in the Pacific Ocean helped fight infectious diseases and that the haze over the Smoky Mountains had curative powers for tuberculosis patients.

Reagan's handlers developed an inspired solution to the problem of an engaging presidential candidate whose head was filled with more misinformation than Dick Cheney's office. They perfected a technique pioneered by Richard Nixon: keeping the candidate as far away from spontaneous conversations with the press or voters as possible. Everything in Reagan's campaigns and much of his presidency was choreographed down to the smallest detail on 3-by-5 cards.

Looking back, Earth Day voters who recoiled at Reagan's words got it right -- this was indeed a would-be president with the environmental sensitivity of an actor turned pitchman for General Electric. In this case, the blurted words reflected a larger truth about Reagan's beliefs.

It is worth pondering what are the lessons that the 2008 presidential candidates and their advisors are likely to draw from Biden's latest display of hoof-in-mouth disease. Their natural instinct is to conclude that this is what Biden gets for veering away from bland talking points and revealing how he actually feels about his front-running rivals. If anything, for better or for worse, it may reinforce the notion that the message discipline of Hillary Clinton and other robo-candidates is the way to successfully run for president in the 21st century.

Biden's criticisms in the Observer article of both Clinton (everyone knows her but "she can't break out of 30 percent") and John Edwards ("I don't think John Edwards knows what the heck he is talking about" on Iraq) represent a hard-edged interpretation of their weaknesses as candidates. Impolitic as his words about Clinton and Edwards may sound, they are the comparative arguments that second-tier candidates like Biden probably must make if they have any chance of breaking out of the pack. But there was no strategic logic behind Biden's comments about Obama, especially if you accept Biden's claims that he was trying to praise the Illinois senator.

After George W. Bush, few Democrats want a president with a propensity for verbal miscues. But Biden, as chairman of the Senate Foreign Relations Committee, is also one of the most seasoned experts in the Democratic Party on global strategy and probably would have been John Kerry's secretary of state. In an ideal world, Biden's candidacy would be tested by the validity of his views on the Iraq war and domestic policy. But this is the unforgiving sphere of presidential politics -- and Biden may have crossed himself off the 2008 list with the kind of comments that caused him to cross himself on Comedy Central.