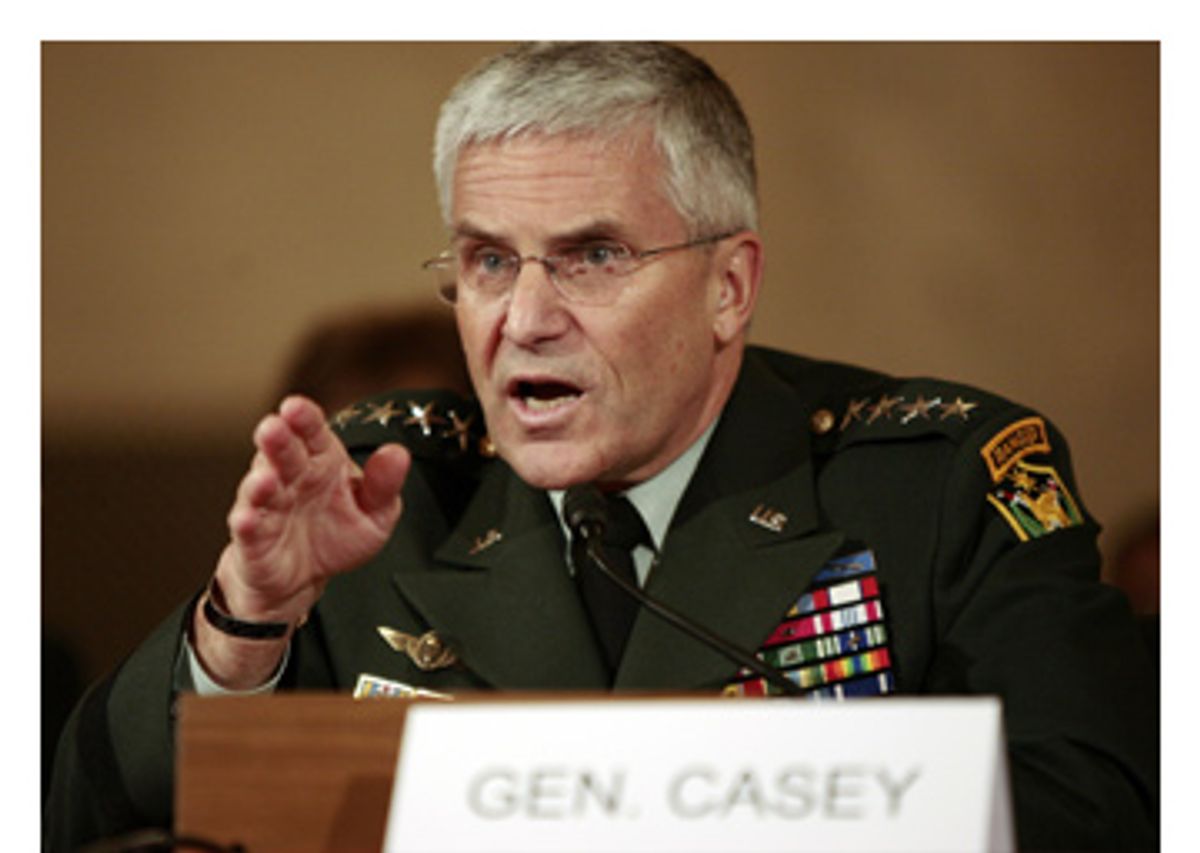 An unconventional military arrangement between the United States and the Iraqis to split command of operations during the surge into Baghdad has shaken the support of key proponents of the escalation, including Sen. John McCain. The rift over the idea appeared to widen on Thursday during a Senate Armed Services Committee hearing on the nomination of Gen. George Casey, the outgoing commander in Iraq, to become the Army chief of staff.

McCain and the other key supporters of a surge of troops into Baghdad, including the American Enterprise Institute's Frederick Kagan and former Vice Chief of Staff of the Army Jack Keane, have warned that sharing command with the Iraqis could make success in Baghdad impossible. Under the potentially risky scheme, Americans and Iraqis will fight beside each other in Baghdad -- but report to their respective commanders. McCain late last month told the incoming commander of U.S. forces in Iraq, Lt. Gen. David Petraeus, "I know of no successful military operation where you have dual command." Hawks like Kagan have called for the Americans and Iraqis to work side by side, but with the more competent Americans in control.

On Thursday, the storied former chairman of the Armed Services Committee, Virginia Republican Sen. John Warner, joined the chorus of critics questioning the dual-command structure. Warner grilled Casey over the arrangement and questioned whether the split command could put U.S. troops at further risk.

Warner told Casey that he had "great concern" that the plan to bifurcate the lines of command in Baghdad, the result of an apparent political compromise with the Iraqis, would result in dangerous complications on the battlefield. Warner described a hypothetical scenario in which an Iraqi platoon commander would decide during a battle: "This mission we've got before us, we've got to maneuver to the left." But the American platoon commander by his side would simultaneously figure, "Oh no, my calculations -- we've got to maneuver to the right."

In response, Casey admitted, "I don't think there's any question that what you're describing could happen." But he added that he thought the military could manage the problem through communication and close cooperation.

McCain and Warner will be the main protagonists in an unprecedented debate on the Senate floor expected next week over a nonbinding resolution opposing President Bush's proposed surge of troops. In the coming debate, McCain, a former prisoner of war, gives Bush's plan political ballast. But opposition by Warner, as a former secretary of the Navy and a hawk who is wired into the Pentagon, provides potent political cover for senators opposed to the surge. On Thursday, Sens. Chuck Hagel and Joe Biden threw their support behind a compromise anti-surge resolution backed by Warner.

McCain and Warner came into agreement at least temporarily on Thursday when Warner joined McCain in his criticism of the dual-command idea. While McCain has said the complications posed by two bosses on one battlefield could doom the surge to failure, Warner focused on whether more American blood might be shed in the confusion that might ensue on the battlefield. Would the arrangement, Warner asked Casey, "increase in any way the risk of the American GI participating in these operations?"

Casey said no. He described commanders on the ground as comfortable with the structure. But he did call it a nonstandard arrangement and admitted it was not ideal. "Is it as good as having everybody lined up and working for us?" Casey asked rhetorically. "No. There will be more friction than that," he acknowledged. "But I do not think that it significantly increases the risk to our forces."

In response to Warner's interrogation, Casey advanced the awkward argument that at least the various Iraqi forces fighting in Baghdad -- the army, local police and national police -- had agreed to report to only one Iraqi commander: a "significant improvement" over previous engagements in Baghdad. "It finally gets unity of effort, of the Iraqi army and Iraqi police and the national police under a single [Iraqi] commander," Casey said.

The agreement to share command with the Iraqis has been seen by some as a possible concession by Bush, who wants more U.S. troops in Baghdad, to Iraqi Prime Minister Nuri al-Maliki, who does not -- a war plan drawn up by committee. Casey explained on Thursday that Bush had pushed the plan for nearly 18,000 more troops into Iraq's capital over Maliki's objections, but did not say outright what concessions may have been made in return to the Iraqi leader. Casey said that during a meeting with Bush in Amman, Jordan, at the end of November, it was Maliki who first floated a plan to secure Baghdad. Maliki's plan did not call for more U.S. troops but split Baghdad up into nine sections, with Iraqi and Americans in each district. Casey described Maliki as generally resistant to more U.S. troops. "He would generally rather not have additional coalition forces," Casey said bluntly.

In the end, the White House proposal borrowed from some of Maliki's plan. But the centerpiece of Bush's plan is for five more U.S. brigades, or nearly 18,000 soldiers, to flood into Baghdad to fight alongside the Iraqis. Still, in the end that plan allowed the Iraqis to have full control over their own troops, which has proved unpopular among many surge supporters.

There were other awkward moments, as Casey defended the plan to send more troops even though he had not thought that adding so many soldiers was the right course when he himself was commander on the ground. McCain used the opportunity to berate Casey for statements about the progress in Iraq that have come from the Pentagon and congressional Republicans. McCain asked Casey to respond to an "abundance of quotes I have here in front of me that painted a very optimistic and rosy scenario which did not comport, in the view of many of us, with the actual conditions on the ground."

Casey admitted that things on the ground had changed rapidly and that some of his predictions had not panned out.

Casey added that late last year, as the Army was drafting its own plans to lock down the capital, he did want two more brigades in Baghdad, but he said he would not have sent all five brigades. "My bias is that I don't want to bring one more soldier in there than we need," he told the committee. But he said that the high number would give Petraeus great flexibility in the fight. "He'll probably look at things differently than I do," Casey added.