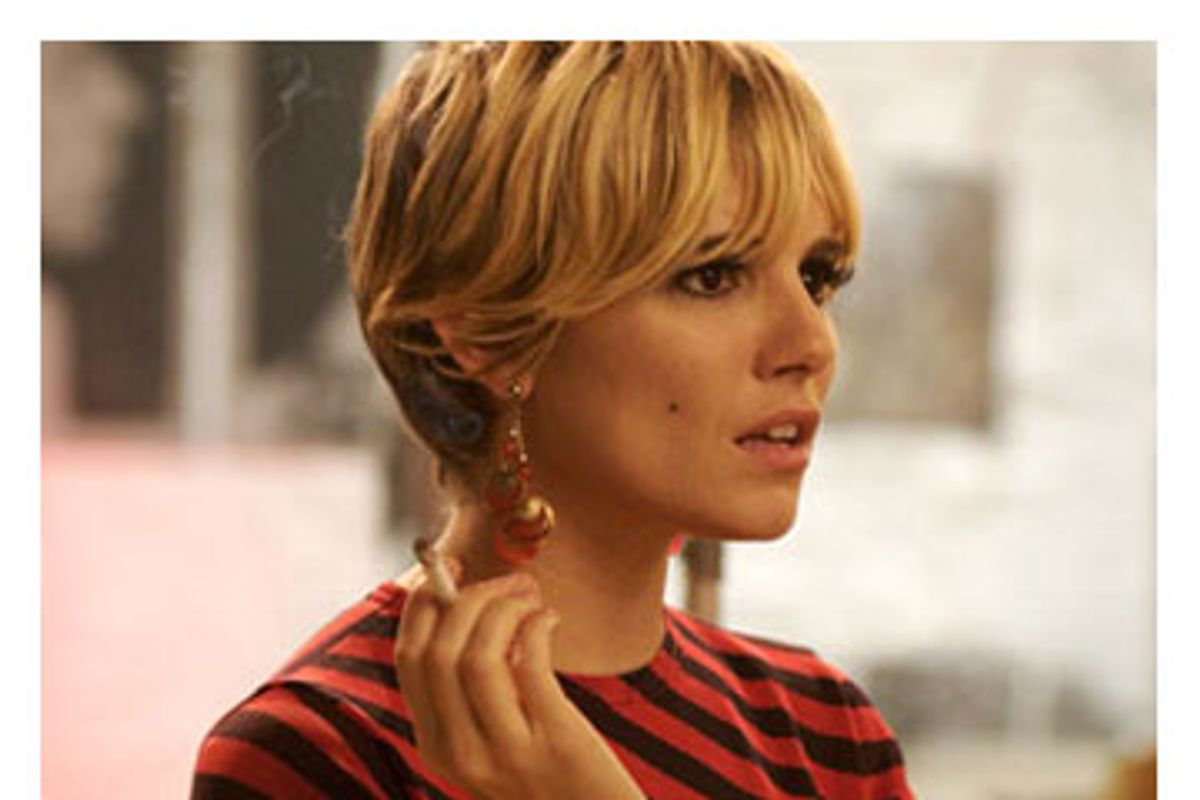 The story of Edie Sedgwick, fallen veteran of Andy Warhol's Factory scene, is one of those sagas that courts an uneasy mixture of prurient curiosity and compassion. Sedgwick, an heiress who became the most glittering star in Warhol's collection before she was destroyed by drug use and mental illness (she died of an overdose in 1971), is a classic symbol of all that can go wrong when you seemingly have it all. A lost it-girl in a silver mini-dress, Sedgwick has also become a shorthand notation for the glamour and decadence of the 1960s, a convenient blend of vixen and victim.

George Hickenlooper's impressionistic biopic "Factory Girl" is a strange little affair, and not a wholly successful one. The picture often feels torpid and listless, as if Hickenlooper had, intentionally or otherwise, fallen into the halting, hesitant rhythms of Andy Warhol's speech and physical mannerisms. The story is cluttered with too much signpost dialogue, as if it were made expressly for young 'uns who'd never seen a soup can outside of the kitchen cupboard. As the young Edie Sedgwick -- she's played by Sienna Miller -- gets ready to leave Cambridge, Mass., for New York, circa 1965, she offers a too-tidy thumbnail critique of the already-famous Warhol to her close friend, Syd Pepperman (a composite fictional character played by Shawn Hatosy, in a warmly shaded performance): "I mean, he's changing the way we look at the world, isn't he?" The line feels stiff, didactic and terminally square, an instance of eager, and unnecessary, overexplaining.

But if the filmmaking is in some ways awkward and elementary, Hickenlooper's attitude toward his subject is more complex, and more admirable. Hickenlooper was co-director of the 1991 "Hearts of Darkness," a documentary chronicling Francis Ford Coppola's unraveling during the making of "Apocalypse Now"; since then, he's made engaging documentaries (like "Mayor of the Sunset Strip," about the legendary L.A. disc jockey Rodney Bingenheimer) and flawed fiction films that nonetheless have lots of interesting textures (like "The Man From Elysian Fields," which featured an extraordinarily fine-grained performance by Mick Jagger). With "Factory Girl," Hickenlooper shows just the right degree of protectiveness for his subject: This is a tawdry, fascinating tale (one loaded with outrageous style and, of course, great clothes), but Hickenlooper doesn't take the all-too-common tack of luring us in with pleasurably decadent images only to punish us later for having enjoyed them -- this isn't a "Look where loving style over substance will lead you!" morality tale à la "Blow-Up." Instead, Hickenlooper takes pleasure in Sedgwick's allure, and he invites us to do the same. His approach suggests a kind of quiet generosity, the opposite of raking the bones of a famous dead person who met a bad end.

Sedgwick's story, as it's interpreted here (the script is by Captain Mauzner, from a story by Mauzner and Simon Monjack and Aaron Richard Golub), is one of a groovy sun goddess in black tights and dangly earrings, orbited by an assortment of friendly and unfriendly planets. Sedgwick came from old money, and had a history of sexual abuse and mental illness. (Her father, who went by the satanically benign-sounding name "Fuzzy" and who's played by James Naughton, appears in one grimly telling scene.) When Sedgwick arrives in New York, fresh from art school, Warhol spots her and is understandably smitten. This Warhol is played by Guy Pearce, in a suitably stylized, unsettling performance: He's a ghostly presence, a trembling ectoplasmic apparition made visible to mere humans by the warring forces of confidence and insecurity whirring inside him. When Warhol first spots Sedgwick, across a crowded art gallery, his gaze is both love-struck and predatory, as if he were a hunter briefly admiring the beauty of a deer before raising his rifle.

Warhol comes off rather badly in "Factory Girl," but the film does suggests that this strange man, for whom emotional detachment was a kind of pathology, felt something for Sedgwick that he couldn't quite deal with. (There's one charming, silly scene in which the two gabble to each other on the telephone, from their respective homes, as they wallow in his-and-hers bubble baths.) "Factory Girl" suggests that the people who were most attracted to Sedgwick were also the ones least likely to help her when she needed it: Hayden Christensen plays a cryptic, shambling troubadour, known only as "the Musician," who woos Sedgwick but gives up on her when he realizes the hold Warhol has on her. (Bob Dylan's lawyers raised a stink about the movie last December, claiming it suggested Dylan was responsible for Sedgwick's death. And while the movie does suggest a certain callousness on the part of the Dylan stand-in, it also suggests that he tried to get her to fight for the money Warhol owed her.) Jimmy Fallon plays Warhol hanger-on Chuck Wein as an oily manipulator. Even Diana Vreeland (played, in a stroke of brilliant casting, by a pompadoured, red-lipped Ileanna Douglas) comes off as marginally kind, but in the end she has more lacquer than heart.

At the center of it all is Miller's Sedgwick: At the beginning of the movie, I wasn't sure Miller was up to the task -- she's always struck me as pretty but hollow. But her performance is touching without being overwrought. Miller, done up here with those silent-film siren eyes, that shock of white-blond, dark-rooted hair, plays Sedgwick as a grave gamine, a creature whose capacity for reckless delight was, at least for a time, a viable survival tactic. "Factory Girl" has the right look for the era. (The production designer is Jeremy Reed; the costumes are by John Dunn.) From the dark, velvety, art nouveau cloister of Warhol's bedroom, to the foil-covered walls of the Factory, the picture captures the inventiveness and fakery of the Warhol kingdom. And before her fall -- which Hickenlooper portrays with the appropriate degree of horror and sadness, although he doesn't milk it for sensationalism -- Miller's Sedgwick, in an array of jersey shifts and luxe beaded tunics that barely cover her bum, is such a vision of decadence, luxury and fun that not even a sullen Mayflower pilgrim could escape enchantment. At one point Pearce's Warhol tells her, in a monotone that almost breaks the surface of actual enthusiasm, "It's so much more fun in New York since you showed up." Even coming from the lips of a man adept at slippery slogans, those words must have been true.