Rep. Phil English is among a growing number of Republicans betting their political future on a retreat from the commander in chief. 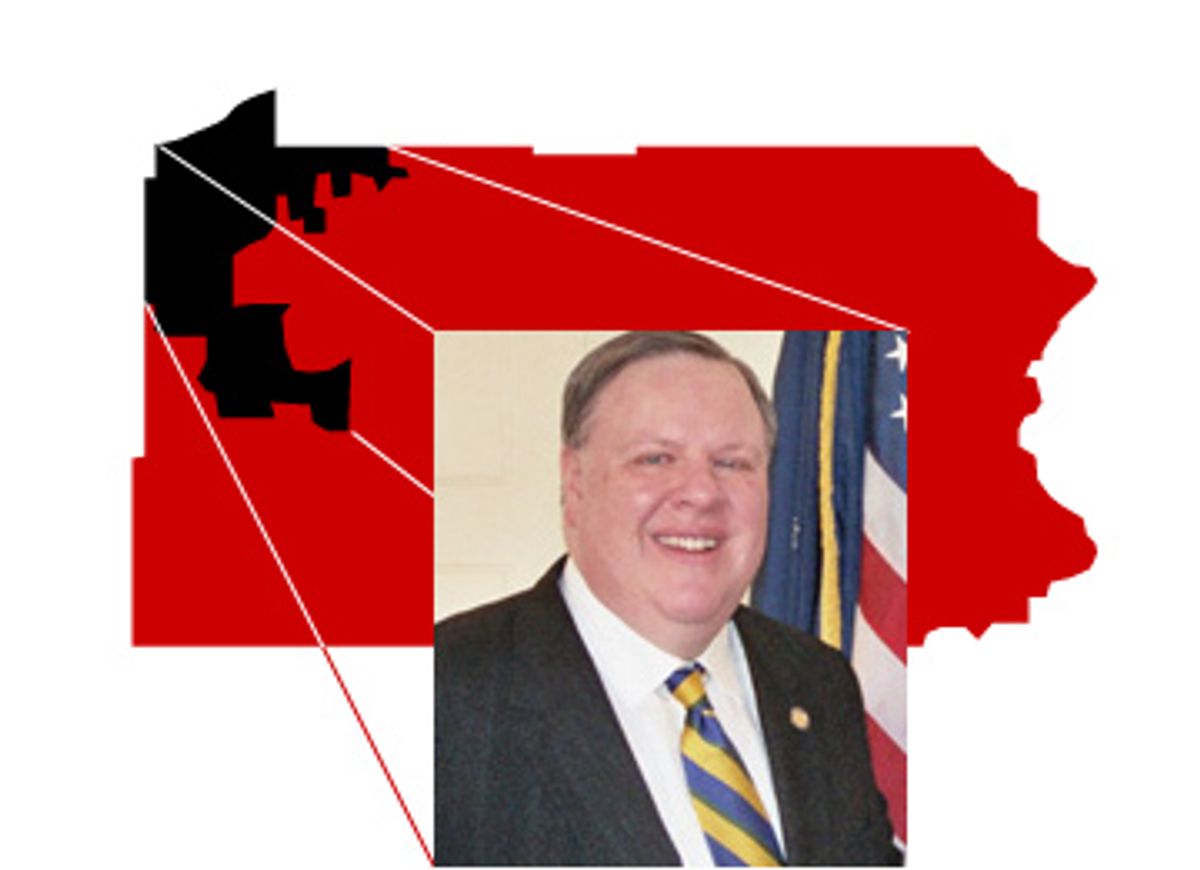 Like many other Republicans in Congress right now, Rep. Phil English has no good options. His northern Pennsylvania district, home to a small but vibrant peace movement, has become increasingly disillusioned with President Bush's war in Iraq. At the same time, English's conservative base sees betrayal in anything short of full support for the war effort.

"There is a level of polarization out there that makes any thoughtful discussion of nuanced differences very difficult," said English, a longtime GOP activist first elected with the Newt Gingrich revolution in 1994, during a recent interview in his Capitol Hill office. "The Republican base, which is substantial in my district, does not distinguish between criticizing the administration on tactics and butting heads with the administration on the rest of the agenda."

But English has decided to buck the party line anyway, joining seven Republican colleagues in a letter that defiantly opposed Bush's surge plan deploying another 21,500 troops to Iraq. They are by no means alone: Since Bush announced the plan, more than 40 Republican House members have expressed concern or voiced opposition to the plan. Others have kept their doubts to themselves. Like English, many of the other critics come from moderate districts in the northeast and Midwest, where they will face tough reelection fights in 2008 if the war in Iraq continues on its current course.

The full scope of the discontent in the House has been eclipsed in recent weeks by preparation for this week's debate in the Senate over a nonbinding resolution opposing President Bush's battle plan. For members of both chambers, the 2008 elections loom large, and the outcome of the final vote on the resolution will likely have as much to do with political concerns as policy concerns. Key senators who face reelection next year, including Minnesota's Norm Coleman, Maine's Susan Collins, and New Hampshire's John Sununu, could be deciding votes in the Senate. In the House, the support of English and other dissenters with reelection concerns could seal the deal on a bipartisan vote of no-confidence for Bush.

The rhetoric in both chambers is sure to hinge on principles of patriotism and constitutional responsibility. But there is little doubt that political calculation will rule the final vote.

"After the election, I think a lot of Republicans just faced the fact of how unpopular the war is and how unpopular the president is," explained Rep. Walter Jones, R-N.C., a longtime advocate of withdrawing from Iraq. Jones said he even received a call from former Rep. Gil Gutknecht, R-Minn., who lost his reelection battle last year after serving six terms. "He said he wished he had listened to me on Iraq," Jones said.

Hoping to prevent mass defections from Bush, the House Republican leadership has held multiple "listening sessions" with members to hear their concerns and to find a consensus. Minority Leader John Boehner has proposed legislation, expected to be made public this week, that would set symbolic benchmarks to measure success in Iraq, a move intended to alleviate some of the Republican concerns. At the same time, the Republican leadership has been unified in characterizing nonbinding resolutions opposing the surge of troops as nothing more than a partisan ploy meant to embarrass the president.

Republicans like English, however, have already charted a different course. "People need to reflect their own districts," he explained. "The Republican Party has to be a substantial presence in places like New England, the Middle Atlantic states and the upper Midwest, where the war hasn't been popular and Republicans haven't been doing well, frankly."

English's stand carries weight because of the status he holds inside the Republican caucus. Last year, he ran for the chairmanship of the National Republican Congressional Committee, the fundraising body that oversees election efforts. Though he lost the race, he continues to help the current chairman, Rep. Tom Cole of Oklahoma.

English's own stand on the war is indeed filled with nuance. He describes himself as a firm supporter of Bush's efforts in the war on terror, which he sees as part of a bigger battle that the United States must win against violent Islamist extremism. But he is also a pointed critic of the tactics Bush has used in Iraq. "I have gone into this project with the understanding that what we need to do is try to change the Middle East in a fundamental way, which I believe takes diplomacy and soft power as much as it does an application of force," English said. As for the surge of roughly 17,000 troops into Baghdad (the other 4,000 or so troops are being deployed to Iraq's Anbar province), English calls himself "very doubtful" about a successful operation, given conditions there he likens to a civil war.

He believes that Congress should provide rigorous oversight and that it can play a limited role in changing policy, though he opposed cutting funds for the troops. "I don't want to create a bad precedent by trying to micromanage where the president may put 20,000 troops," English said. "Once our troops are in Iraq, it's ultimately the commander in chief who is responsible for implementation. I don't think there is any way of effectively sharing power."

Pennsylvania's third district, which English represents, fills the northwest corner of the state, where Lake Erie meets the Ohio border. It is a moderately Republican region of small cities, farmland and forest, whose constituents voted for Bush in 2004 by a 6-point margin. A large, amiable man and an Erie native, English rode to Congress on the momentum of the Contract with America and the 1994 election of former Republican Gov. Tom Ridge, who also hails from the district. Though English once worked for former Sen. Rick Santorum, he has at times been a moderate in the House, supporting increases in the minimum wage, for example, and voting against all but one article of impeachment against President Bill Clinton.

In 2006, English comfortably won reelection in the face of an underfunded and bombastic opponent, earning 54 percent of the vote. But in the current political crossfire, the House member appears to be in no position to take his seat for granted. A recent editorial in the Herald, a newspaper in Sharon, Penn., described English as "ripe for defeat" for a number of reasons, including the Republican Party's support for an inept Iraq policy. At the same time, in recent weeks, Republican officials in his district have gone on the offensive against English, condemning his criticism of the president. "My feeling is, we don't elect politicians to get elected again. We don't elect politicians to put their finger in the air," said Patrick W. McHenry, the Crawford County coroner, who worked on the 2004 Bush-Cheney campaign. "We don't need a Chamberlain out there. We need a Churchill."

To date, English says his Republican colleagues have not pressured him to change his views. But discussions are intense behind closed doors.

Minority Whip Roy Blunt has made it clear that significant Republican support for a bill condemning the surge would be a political defeat for the party -- but Blunt has also suggested that he will not directly pressure Republicans to oppose legislation denouncing the president's plan, which is likely to reach the House floor in the coming weeks. "At some point everyone's patience is going to wear thin," said an aide to one Republican representative who has so far supported the surge plan. Another GOP congressional aide said he would be surprised if there were any leadership effort to force Republicans into line on Iraq. "This sunk us in '06 and it will sink us in '08," the aide said.

For his part, English is taking a long view. It is still too early to work out the implications for the 2008 elections, and the Republican Party will surely bounce back from its current setbacks, he contends. But he also said that he hopes the White House takes notice of the increasing tremors of dissent within the ranks. "If a significant number of Republicans were turning out with a set of concerns that the White House may have trouble addressing," he said, "then that should be a concern for the White House."

It was a carefully worded warning to the president of his own party that loyalty has its limits.