Ryan O'Neal arrested. The latest word on Stoppard, Prince, and Mac vs. PC. Plus: Britney on singlehood: "It's awesome!" 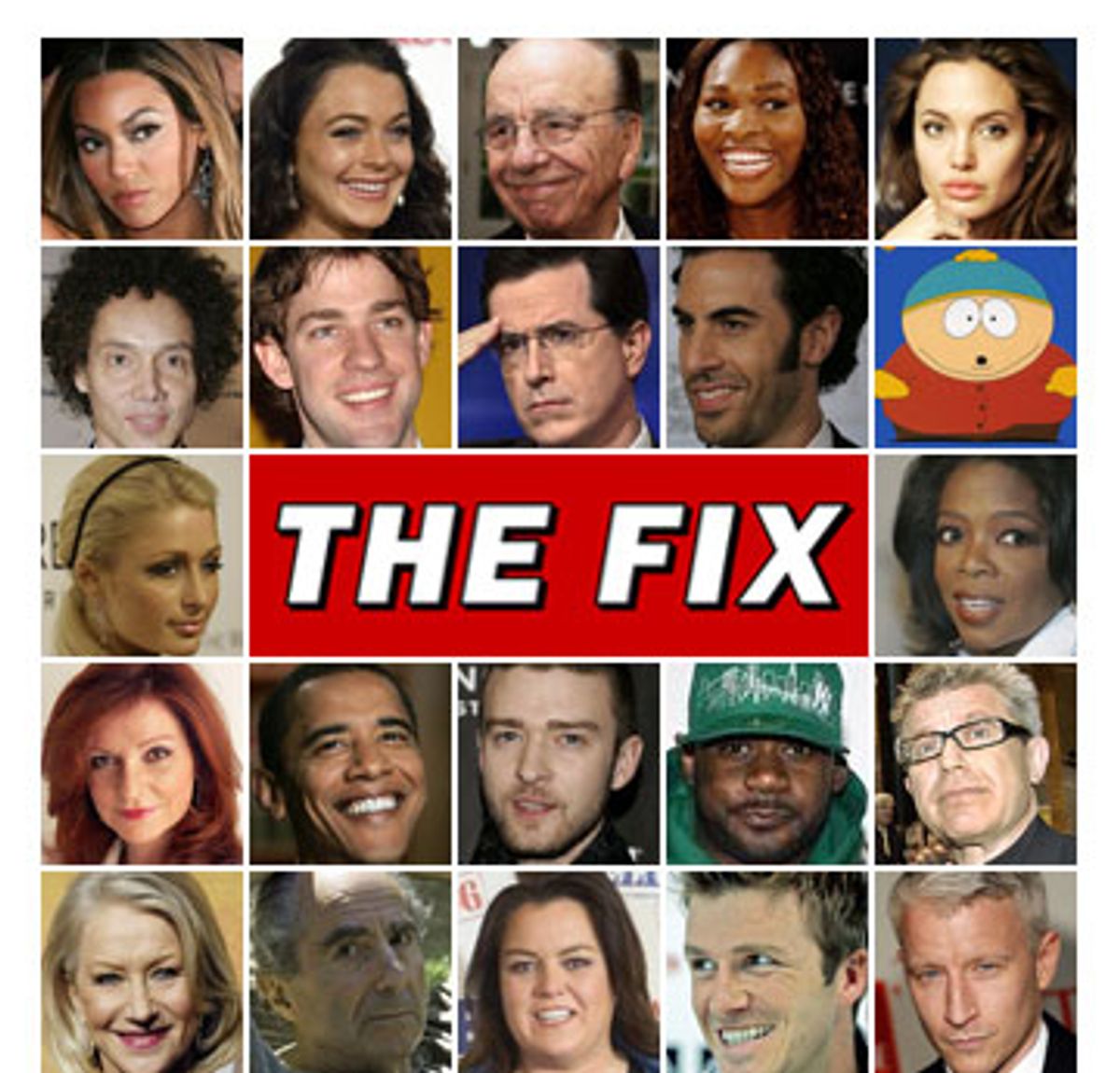 Welcome to the new Fix! The look is new, but the changes aren't merely cosmetic. While we'll still be keeping you up-to-date on the adorable antics of Spears, Hilton, Lohan et al., we've expanded our coverage to include what's happening across the whole spectrum of culture. Think of this as your crib sheet for the day's water-cooler talk -- from can't-miss reviews, crucial cultural zeitgeist pieces, to an index of the freshest Web chatter, sprinkled with bits of cultural reporting you can't find anywhere else.

And in the era of information fatigue, the new Fix is our anti-blog: Instead of coming back multiple times each day, we give you one tidy, comprehensive summary each morning by 9:30 a.m. (EST) -- and you can have it sent directly to you by e-mail. Just put your e-mail in the box above and we'll send you each day's Fix when it's ready. We also hope to hear more from you, too. Don't be shy -- send your tips to thefix@salon.com. Ryan O'Neal arrested: Actor Ryan O'Neal, 65, was arrested in Malibu, Calif., early Saturday morning on charges of assault after a fight with his son, Griffin (himself once indicted for manslaughter following the death of Francis Ford Coppola's son in a boating accident). Police say O'Neal had a gun and fired off at least one round during the scuffle, and that a 22-year-old woman, a friend of Griffin's, was treated for injuries at the scene, though not from the gunfire. O'Neal was released on $50,000 bond. (TMZ)

Zucker to assume NBC Uni helm: The Los Angeles Times broke the news over the weekend that former wonder boy Jeff Zucker, now 41, will replace Bob Wright as the chief executive of NBC Universal. Zucker, who became executive producer of "Today" at 26, is head of NBC television. (L.A. Times)

Scorsese takes top DGA award: After being nominated six times without winning, Martin Scorsese was finally given the top honor at Saturday's Directors Guild of America awards, winning the prize for best feature film director for his work on "The Departed." The win brings him that much closer to Oscar: Only six times in the 58 years the DGA awards have been around has the winner not gone on to win best director at the Academy Awards. Scorsese is 0-5 at the Oscars. (Associated Press)

White noise ... A federal judge granted Paris Hilton a temporary restraining order against ParisExposed.com on Friday, barring the site from displaying any of the heiress's personal information -- Social Security info, medical records -- or displaying images of her depicted "in a sexual manner not previously exposed to public viewing." (TMZ) ...

After four years together, Kylie Minogue (right) and actor Olivier Martinez have split up. They released a joint statement Friday announcing the "mutual and amicable" breakup, and said they are both "saddened by false accusations of disloyalty" that have been circulating in the gossip pages recently. (People) ... Britney Spears, on how she likes being single: "It's awesome." (People) ... Overheard: Mario Batali, Anthony Bourdain and British chef Marco Pierre White all reportedly "badmouthing" Gordon Ramsay at last week's book launch dinner for White's book, "The Devil in the Kitchen," at Batali's Lupa restaurant in New York. (Page Six, the Bon Appétit blog)

Consummate insider: The New Yorker profiles über-insider Howard Rubenstein, a "fixer" who is like a public version of the Jodie Foster character in "Inside Man." He's the 75-year-old P.R. giant behind New York's most oversize personalities, including "George Steinbrenner, Rupert Murdoch, Donald Trump ... Leona Helmsley ... [and] Lizzie Grubman. He has advised the last six mayors and the last four governors" and many more. The piece describes how Rubenstein brokered a "cease-fire" between media moguls Rupert Murdoch and Mort Zuckerman; Murdoch sought "a way to keep their private lives out of the pages of each other's tabloids," and afterward, the New York Post stopped covering Zuckerman's personal life, and the New York Daily News laid off Murdoch. Former NYDN gossip Lloyd Grove confirms it, saying, "It was communicated to me that there was a gentlemen's agreement that nothing personally critical could be written about Rupert or his family, and the understanding was that it was reciprocal." Rubenstein doesn't completely admit that lying is a part of his job, but suggests as much. Describing how a client who has been fired for incompetence can be spun, described as leaving to explore new opportunities, he says, "If your left foot has a corn and your right foot doesn't, you put your right foot forward. That's a pretty good definition of what a P.R. person does." (The New Yorker, newsstands only) "I'm a smug, preening tosser!" The "I'm a Mac, I'm a PC" ads have crossed the pond, with different actors (British TV stars David Mitchell and Robert Webb). The Brits bring a new dimension to the ad, at least according to Guardian columnist Charlie Brooker, who writes: "Mitchell and Webb ... are a logical choice in one sense (everyone likes them), but a curious choice in another, since they are best known for the television series Peep Show -- probably the best sitcom of the past five years -- in which Mitchell plays a repressed, neurotic underdog, and Webb plays a selfish, self-regarding poseur. So when you see the ads, you think, 'PCs are a bit rubbish yet ultimately lovable, whereas Macs are just smug, preening tossers. In other words, it is a devastatingly accurate campaign." ("I Hate Macs," the Guardian)

Assault on Stoppard's "Coast": The headline of Charles Isherwood's review of Tom Stoppard's three-part work, "The Coast of Utopia," says everything you need to know about the article that follows: "'Utopia' Is a Bore. There, I Said It." Along the way to describing the second installment of the play as "CliffNotes" and "a stubbornly diffuse, inert and intractable slab of oral history," Isherwood decries the critical weight that builds up around works, like "Coast" -- in what seems might be an interoffice swipe at lead theater critic Ben Brantley, who swooned over the play's first installment -- that are almost universally praised: "Everyone says it's brilliant; I am bored; therefore I am not smart enough to appreciate its brilliance. The play isn't a failure: I am." ("'Utopia' Is a Bore. There, I Said It," N.Y. Times)

Prince is king: New York Times music critic Kelefa Sanneh says Prince's Super Bowl performance will "surely go down as one of the most thrilling halftime shows ever; certainly the most unpredictable, and perhaps the best," and says it was "yet more proof that Prince has made that familiar journey from pariah to American treasure." ("A Noncontroversial Prince, Just the Way the N.F.L. Likes Him," N.Y. Times)

"There was only one really perfect thing on the face of this earth, and he was crucified. To us, the pug is pure."

-- An anonymous pug breeder, quoted in the NYT Magazine's piece on the new designer puppies.

Media companies often trademark names long before possible productions ever come to fruition. (Indeed, many never even see the harsh light of day.) Still, we took a look at their recent applications to the U.S. Patent and Trademark Office to give us a glimpse of the joyous things that await just over the horizon. (Big thanks to reader Michael Ravnitzky for the tip.) And what we've found might frighten or delight you. From now until Friday, we'll present our favorite finds:

Trademark: Groom Reaper
Owner: Court TV
Possible use: For use in an upcoming reality-based television series featuring real-life crimes involving marriages called "Til Death Do Us Part," which is rumored to launch sometime in February. The phrase Groom Reaper refers to the host, John Waters. Julie Delpy, is that you? (from Eleutheromanic's Flickr photostream.)