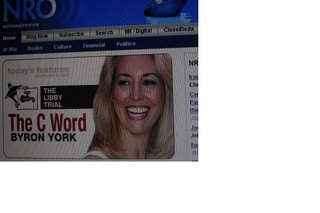 The sheer hatred directed at Valerie Plame by Bush followers has always been intense, extreme, and deeply personal -- even when assessed within the context of their standard operating procedure of despising any government employee, civil servant, and especially any military or intelligence professional who is perceived to have done something politically harmful to the Leader (the textbook case for that were the immediate threats of criminal prosecution directed at former Treasury Secretary Paul O'Neill after he criticized the Leader upon resigning his position). But for reasons best left to the field of psychology rather than political science, many of them harbor a special, particularly deranged and particularly irrational hatred for Valerie Plame.

In that regard, the decision by National Review to label Plame on its front page as "The C Word" -- please let us dispense with the pretext that they only meant "covert" -- may not be surprising, but it ought to be worth at least a six month moratorium on all of the pious protests over how angry, profane and uncivil "the Left" and "liberal bloggers" are. As York himself fretted in his book, The Vast LeftWing Conspiracy: "The Left is angry—angry at President George W. Bush, the war in Iraq, the 'right-wing media,' and more."

Somewhere along the way it was decided that the most egregious act of "incivility" is not spewing vile ideas or violence-inciting rhetoric, but instead, the absolute worst injury to our body politic, the most disturbing sign of "anger," is the use of naughty words. From National Review's Stanely Kurtz, reviewing Peter Wood's new book on anger in politics:

New Anger is nowhere more at home than in the blogosphere, where so far from being held in check, look-at-me performance anger is the path to quick success. Wood's section on the “proud maliciousness” of bloggers (titled “Insta-Anger”) will stir debate, yet it's far from a blanket indictment. The Insta-Pundit himself is off the hook, for example. “[Glenn] Reynolds' comments are often sardonic but seldom angry,” says Wood. On the other hand, Atrios explaining “Why We Say 'F***' a Lot” (expurgation most definitely not in the original) fares far less well at Wood's hands.

Glenn Reynolds spews bigotry and paranoid rantings as overt as can be imagined, continuously smears the media and political opponents as traitors, calls for one war after the next, disseminates the most baseless and false innuendo virtually on a daily basis, but there is nothing "angry" or "uncivil" about any of that because he refrains from using naughty words.

Indecent accusations and wretched ideology decorated with civil-sounding words are acceptable. But substantive ideas and protests against government action which periodically include a naughty word is an unparalleled bane on civilization that no decent person can accept. Using those (shallow though almost universally accepted) standards, what does National Review's application of "the C Word" to Valerie Plame reveal about its place in our political discourse?