As the president and Republicans continue to hype the surge -- and stifle debate about it -- Bush's own war planners are preparing for failure in Iraq. 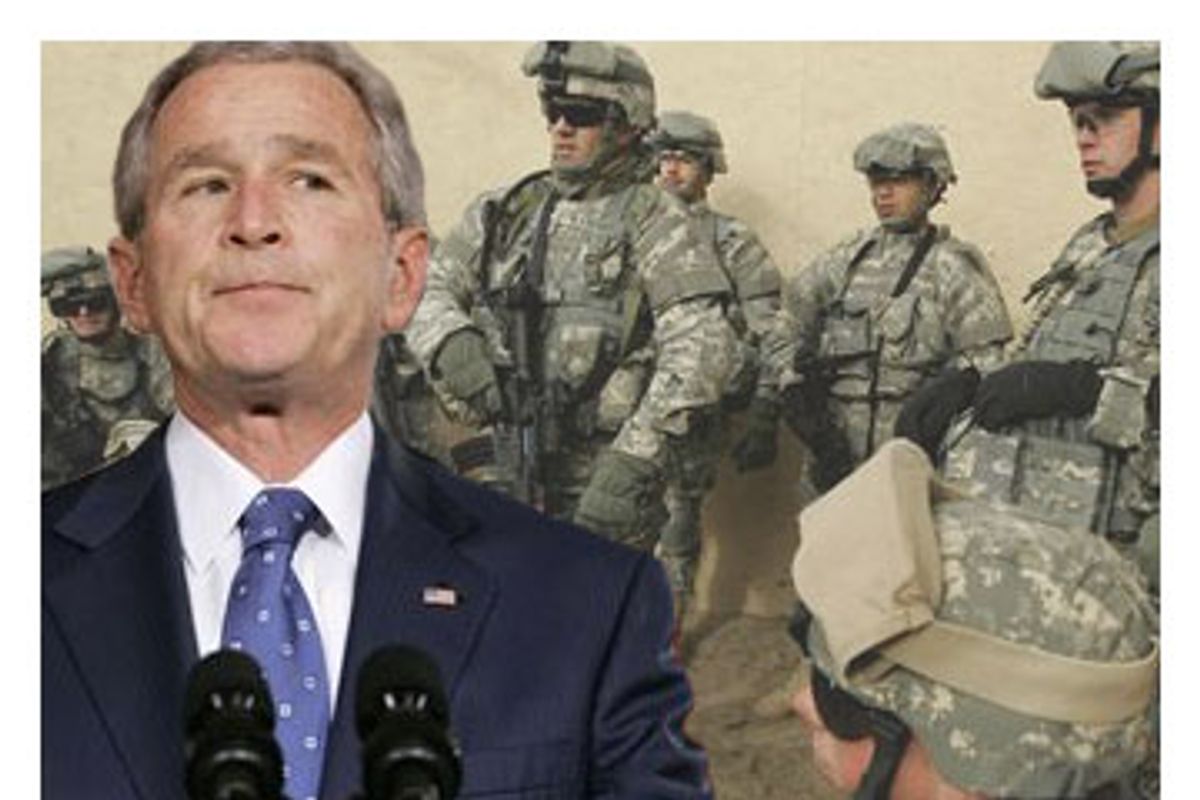 Deep within the bowels of the Pentagon, policy planners are conducting secret meetings to discuss what to do in the worst-case scenario in Iraq about a year from today if and when President Bush's escalation of more than 20,000 troops fails, a participant in those discussions told me. None of those who are taking part in these exercises, shielded from the public view and the immediate scrutiny of the White House, believes that the so-called surge will succeed. On the contrary, everyone thinks it will not only fail to achieve its aims but also accelerate instability by providing a glaring example of U.S. incapacity and incompetence.

The profoundly pessimistic thinking that permeates the senior military and the intelligence community, however, is forbidden in the sanitized atmosphere of mind-cure boosterism that surrounds Bush. "He's tried this two times -- it's failed twice," Speaker of the House Nancy Pelosi said on Jan. 24 about the "surge" tactic. "I asked him at the White House, 'Mr. President, why do you think this time it's going to work?' And he said, 'Because I told them it had to.'" She repeated his words: "'I told them that they had to.' That was the end of it. That's the way it is."

On Feb. 2, the National Intelligence Council, representing all intelligence agencies, issued a new National Intelligence Estimate on Iraq, as harsh an antidote to wishful thinking as could be imagined. "The Intelligence Community judges that the term 'civil war' does not adequately capture the complexity of the conflict in Iraq, which includes extensive Shia-on-Shia violence, al-Qaida and Sunni insurgent attacks on Coalition forces, and widespread criminally motivated violence. Nonetheless, the term 'civil war' accurately describes key elements of the Iraqi conflict, including the hardening of ethno-sectarian identities, a sea change in the character of the violence, ethno-sectarian mobilization, and population displacements."

The report described an Iraqi government, army and police force that cannot meet these challenges in any foreseeable time frame and a reversal of "the negative trends driving Iraq's current trajectory" occurring only through a dream sequence in which all the warring sects and factions, in some unexplained way, suddenly make peace with one another. Nor does the NIE suggest that this imaginary scenario might ever come to pass. Instead, it proceeds to describe the potential for "an abrupt increase in communal and insurgent violence and a shift in Iraq's trajectory from gradual decline to rapid deterioration with grave humanitarian, political, and security consequences."

Bush justified his invasion on the basis of false intelligence in the now notorious NIE of October 2002 that claimed Saddam Hussein possessed weapons of mass destruction. Now, as the latest NIE forecasts nightmares, he is escalating the war. But almost everything has changed in the nearly four years since the invasion.

A newly elected Congress has been galvanized to debate a bipartisan resolution disapproving of Bush's escalation. Yet in the Senate, where 60 votes are necessary to establish cloture on a filibuster, the Republican minority has blocked a vote. Though many Republicans are keenly aware that continued support for Bush's policy amounts to political suicide in 2008, all but two of them have joined a phalanx to shut down the vote. By mustering behind him, they tie their fate to his policy. Bush, however, will be gone, while they remain exposed to the political elements.

Even Sen. John Warner of Virginia, the Republican cosponsor of the resolution against the escalation along with Sen. Carl Levin, D-Mich., cast his lot with the Republican martyr brigade, voting to suppress his own measure. In 2002, the Republican right mounted a primary campaign against Warner in retribution for his deviation from their ideological line, but failed feebly. Warner cannot fear a repetition of the right's vengeance. Can he be undermining himself out of deference to the authority of a commander in chief whose course he believes is reckless?

The Republican prevention of a vote on the Warner-Levin resolution reflects an effort to close debate on the war itself. It amounts in effect to a gag rule on Bush's Iraq policy. During the Vietnam War, under President Johnson, neither party attempted to shut down debate. After 1969, President Nixon's Vietnam policy consisted of misdirection, deception, covert action and fait accompli, such as the counterproductive and ultimately catastrophic invasion of Cambodia. The Bush administration's methods can be traced to the Nixon administration, with Dick Cheney as the connecting thread.

The reception of the latest NIE, even more than the NIE itself, indicates again Bush's and Republicans' denial of objective analysis from the professional intelligence community. The October 2002 NIE was produced under intense pressure from the White House, especially Vice President Cheney, to validate its preconceived views. "The administration used intelligence not to inform decision-making, but to justify a decision already made," Paul Pillar, the national intelligence officer for the Middle East who oversaw the assembling of that NIE, wrote a year ago. In the shadow of this travesty, the new NIE was written with great care; its frightening descriptions, therefore, should be considered to be deliberately guarded and reserved in tone.

As the Senate curdles in frustration over Republican tactics, the trial of Scooter Libby continues to clarify the degree to which the administration covered up its disinformation campaign that led the country into war with another disinformation campaign to cover up the role of the vice president as the prime mover of the smear campaign against former ambassador Joseph Wilson for committing the unforgivable act of revealing the truth. For the Senate Republicans, Scooter Libby is not an object lesson. The lesson they take away, if any, is not the necessity of open government but once again the need to burn the tapes.

Libby's effort to prevent his grand jury tapes from being entered into evidence in his trial resembled nothing so much as Nixon trying to suppress his tapes. Both in the end revealed their respective coverups. Cheney learned from Nixon to burn the tapes at least figuratively; now, his chief of staff, Cheney's Cheney, has tried to protect Cheney by literally and futilely suppressing the tapes. Cheney finds himself back at the beginning. For him, life has come full circle. From the entire history of deception, from the Nixon to the Libby tapes, the Republicans have learned nothing.

The new NIE offers more than "key judgments" on "The Prospects for Iraq's Stability." It is also a template for the short-term future of American politics. The ruthlessly cruel events projected for Iraq will blow back to the United States. The more Bush fights there, the more the embattled Republicans must fight here.

The Senate Republicans' vote to suppress the resolution on the war was the moment when they irrevocably aligned themselves completely with a president who rejects objective analysis. Unable to shield him or themselves from the inevitable consequences, they have made a conscious decision to place the president's delusions above the welfare not only of the Republican Party but also of the troops sent into the deadly labyrinth of Baghdad. Quietly and calmly, as the Republicans hype the "surge," the war planners prepare for the worst.