Former Sandinista revolutionary Ortega is back on top in Nicaragua. Will his alliance with Venezuela -- complete with subsidized oil -- be a model for the rest of Central America? 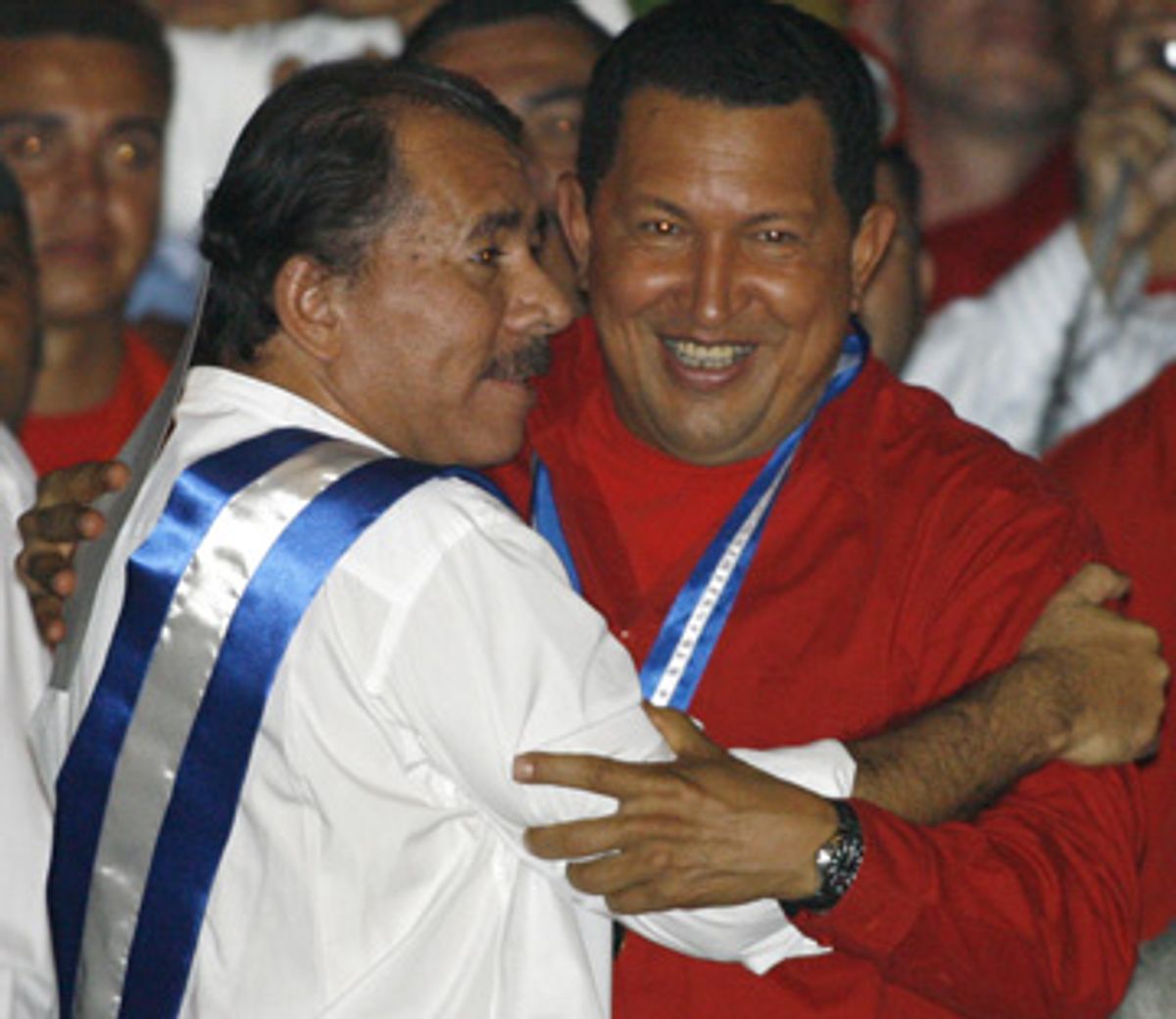 President Ronald Reagan referred to him in 1986 as the leader of a repressive regime and the only president in Central America who wore a military uniform. Then he asked Congress for an additional $100 million to get rid of Daniel Ortega and his 1979 Sandinista revolution.

By 1990 Ortega was out. Now, 16 years later, he's back, but this time the 61-year-old Sandinista has shelved his fatigues for white button-down shirts. The former Marxist sounds almost Smithesque on private property, but Ortega also made it clear at his January inauguration as president of Nicaragua that after nearly two decades of Washington-style democracy in that country, he has something different in mind.

"It has been 16 years in which the people have paid a big cost with the economic policies known as neoliberalism," Ortega told a crowd of thousands gathered at the Pope John Paul II Plaza of Faith in Managua. "Now we have the challenge to open a new road, a road that will permit Nicaraguan families to live in dignity."

It took only one and a half hours for Ortega to reveal his trump card for restoring dignity in Central America's poorest country: Venezuelan President Hugo Chávez. The oil-rich rebel may have been 90 minutes late to the inauguration -- keeping more than a dozen heads of state waiting -- but he arrived with so many goodies, it hardly appeared to matter to Ortega, who might as well have been humming "It's Beginning to Feel a Lot Like Christmas." The bounty included preferential pricing on crude oil in an amount equal to about a third of Nicaragua's annual oil consumption, a refinery, the forgiveness of some $30 million in debt, new interest-free or low-interest loans of $20 million, and a good chunk of free money for homes and healthcare.

The new alliance between Venezuela and Nicaragua offers Central America its first alternative to Washington since the 1980s. Those were the years the Reagan administration spent billions of dollars to prevent leftist revolutions in El Salvador and Guatemala and to undo the 1979 Sandinista revolution, which allied with Cuba and the Soviet Union after being rebuffed by Washington.

Now, after a series of center-right governments and a steady dose of remedies by the International Monetary Fund -- privatizing public companies, lifting trade barriers and reforming the banking sector -- the region could use, well, a few revolutions.

Corruption and governments incapable of collecting taxes and spurring growth to improve wages have failed many Central Americans. In El Salvador, Guatemala and Honduras, misery plus surging violent crime has turned hope into one word: emigration, preferably to El Norte.

It's as if Central America has pressed the Mute button on the ugly immigration debate in their promised land. Few care or even seem aware of how difficult their journey might be. It's simply too important. The money sent home from relatives living legally -- and illegally -- in the United States holds their lives together.

Enter Chávez -- into a Central America doing poorly in nearly every measure of quality of life, economics and security being at the top of the list.

His Bolívarian revolution -- named for Simón Bolívar, who liberated much of South America from colonial powers -- is far from the Cuban model, but it is still a work in progress. So far that means a mix of nationalism, demagogy and some old-fashioned conservative monetary policies, which include increasing tax collection at home by more than 50 percent. (Ouch, no wonder the rich hate him.)

Chávez has shrewdly played to the poor of Venezuela with handouts while placating the international community by respecting trade agreements. It's too early to tell what he will do with the powers he recently won to legislate by decree, but even Thomas Shannon, U.S. assistant secretary of state for Western Hemisphere affairs, is sanguine. The new law, he says, is valid under the Venezuelan Constitution and it depends, "as with any tool of democracy," on how it is used.

If the past is any indication, Chávez is unlikely to do anything too far out of the mainstream. Even in his approach to aid, Chávez rants against capitalism while using its moneymaking possibilities in an inspired way.

He has raised his profile in Latin America through savvy business deals -- buying Argentine debt, for example, and making money off it, or giving Cuba oil in exchange for keeping his base healthy (and happy) with Cuban doctors and free education in Cuba for Venezuelan medical students. He's trying to finance pipelines in Brazil, but there's money to be made in those too.

Nicaragua is the Venezuelan's first move into Central America, and it's unclear what he will get in return. Unlike the South American countries where Chávez usually does business, Nicaragua has neither a large consumer market nor any major natural resources the South American leader might want.

It's possible that Chávez's move is pure ego -- a contest that puts his Bolívarian revolution against Washington's straight-up capitalism of free trade.

Nicaraguans and Ortega seem fully aware of the dynamic but are cagey about playing both sides.

At his inauguration, Ortega promised to respect the U.S.-backed Central America Free Trade agreement, known as CAFTA, but asked the crowd of farmers, students and poor families if they wanted to join Chávez's Bolívarian Alternative of the Americas, known as ALBA, which now includes Venezuela, Cuba and Bolivia.

CAFTA is a full-fledged trade agreement that promises new markets and incentives for business, but it is too new to judge. ALBA essentially offers its members the symbolism of Latin American unity and the immediate reality of Venezuelan dollars.

"We are in CAFTA, and we'll continue to fight for better conditions, but we have our own proposals, our own plans, for the unity of Latin America, which is ALBA," Ortega said.

In a country where 80 percent of the people live on less than $2 a day, few have anything to lose. But for all of Ortega's promises and new alliances, a lot of unanswered questions remain. The first is, who is this new Ortega?

A survivor, he accepted his first defeat in 1990 when he lost the presidency to Violeta Chamorro. Even then, however, he was never really out of the game. With his party still in control of the police and the military, he made life difficult for Chamorro. This didn't inspire support, and when he ran for president again in 1996, he lost to a conservative, Arnoldo Alemán.

Then in 1998, Ortega's stepdaughter, Zoilamérica, accused him of years of sexual abuse -- a charge he denied. Many wondered how he would survive. Much credit is given to two people: his wife, Rosario Murillo, who stood by him and rejected her daughter's allegations, and his rival, then-President Alemán.

By 1999, when Ortega was still reeling from Zoilamérica's accusations, investigators were nipping at Alemán's financial dealings. So Ortega and Alemán worked out what is known in Nicaragua as el pacto, a 1999 agreement that included three provisions: Former presidents could take a seat in Congress and thereby get automatic immunity, government appointments would be shared between the parties controlled by Alemán and Ortega, and the formula for calculating a presidential winner would be reduced from 45 percent to 35 percent.

El pacto came in handy in 2001 when Zoilamérica's charges landed in a Nicaraguan court. Ortega grandly gave up his immunity and went before a Sandinista judge, who quickly concluded that the statue of limitations had run out.

Still, the presidency eluded him. That same year, Ortega lost to Enríque Bolaños. Finally, in 2006, the stars, pragmatism and el pacto aligned.

First, a former Sandinista and popular mayor of Managua, Herty Lewites, who was polling well on the Movement for Sandinista Renewal ticket, died in July of a massive heart attack.

Without real competition from a progressive, Ortega had to contend only with the right. To court this vote, he took a Sandinista opposition figure as his vice president and supported the Roman Catholic Church in its desire to ban abortion in Nicaragua.

With the opposition's vote scattered among four other candidates, the benefits of el pacto kicked in. Ortega needed only 35 percent of the vote and a 5 percent lead. He got 38 percent and a 9 percent lead.

As Carlos Chamorro, the editor of Confidencial and Esta Semana, pointed out, even with all of his calculations, Ortega won only 15,000 of the new voters. His victory put him back in power with the smallest mandate in Nicaragua's contemporary history. "What we want is that the basic things we need are cheap and that there are jobs," said Amo Ballardo, a 40-year-old security guard. "And this old guy," he said, referring to Bolaños, "has taken us" for a ride.

Later in the week, in the northern part of the country, many coffee workers seemed on the edge of desperation. Medando Espinoza, a 28-year-old worker who was drying the end of his coffee harvest, said he works until the job is done but earns only a few dollars a day. He hopes Ortega will help with fertilizer, low-interest loans and technical assistance. Venezuelan aid -- if it comes in at the promised levels -- will help. And despite Nicaragua's position as the region's poorest country, it has some advantages. The biggest is offering investors and tourists a safe place to put their money or spend their time. During a recent trip I made to El Salvador, Honduras and Guatemala, nearly every conversation I had included a crime story. Since the peace accords in El Salvador and Guatemala, murder rates have soared. The number killed per 100,000 citizens reached 55 in El Salvador, 40 in Honduras and 37 in Guatemala. These compare with eight in Nicaragua and six in the United States.

Gangs are only part of the problem. With few prosecutions, all kinds of common crimes flourish. Businesses in El Salvador, Honduras and Guatemala include the costs of security and extortion in their budgets. Armed thieves regularly board buses and walk down the aisles with large plastic garbage cans to collect purses and wallets. In wealthier neighborhoods, armed men simply ring the doorbell and bully their way in.

The governments in all three countries have run different get-tough, or mano duro, policies, but in all cases, crime has only gotten worse.

In El Salvador late last year, outgoing U.S. ambassador Douglas Barclay warned a group of Salvadorans that the violence threatens "to stop economic growth, stop foreign investment and even undo many of the gains since the peace accords."

In this climate, the Chávez money could make a difference in stimulating small businesses, expanding an already growing tourism industry, and adding jobs to the economy. Or Ortega could use the aid to enrich himself and his friends -- it would not be the first time foreign aid ended up being squandered in Nicaragua. The Central American presidents who waited patiently for Chávez to arrive for Ortega's inauguration will be watching his alliance with Chávez. Until now, Central Americans have elected conservative candidates for fear of upsetting Washington. Moreover, with the exception of the late Lewites and his party in Nicaragua, Central America's left has offered few new solutions. If Ortega succeeds, it's possible that progressive candidates elsewhere could emerge and also ally with Chávez.

This possibility was not far from the thoughts of Ricardo Perez, a 25-year-old Honduran student who traveled to Managua with a group of friends to witness Ortega's swearing-in. "Presidents like Ortega can stop the indifference toward the poor," Perez said, adding that he considered Ortega the region's best hope.

But he also understood that the Nicaraguan was unlikely to make it alone, so he and his fellow Hondurans all wore blazing red T-shirts sporting the image of day's honored, if very late, guest -- Hugo Chávez.