Beating back the Bush surge

Congressional Democrats plan a one-two punch to stop President Bush's escalation of the war in Iraq. 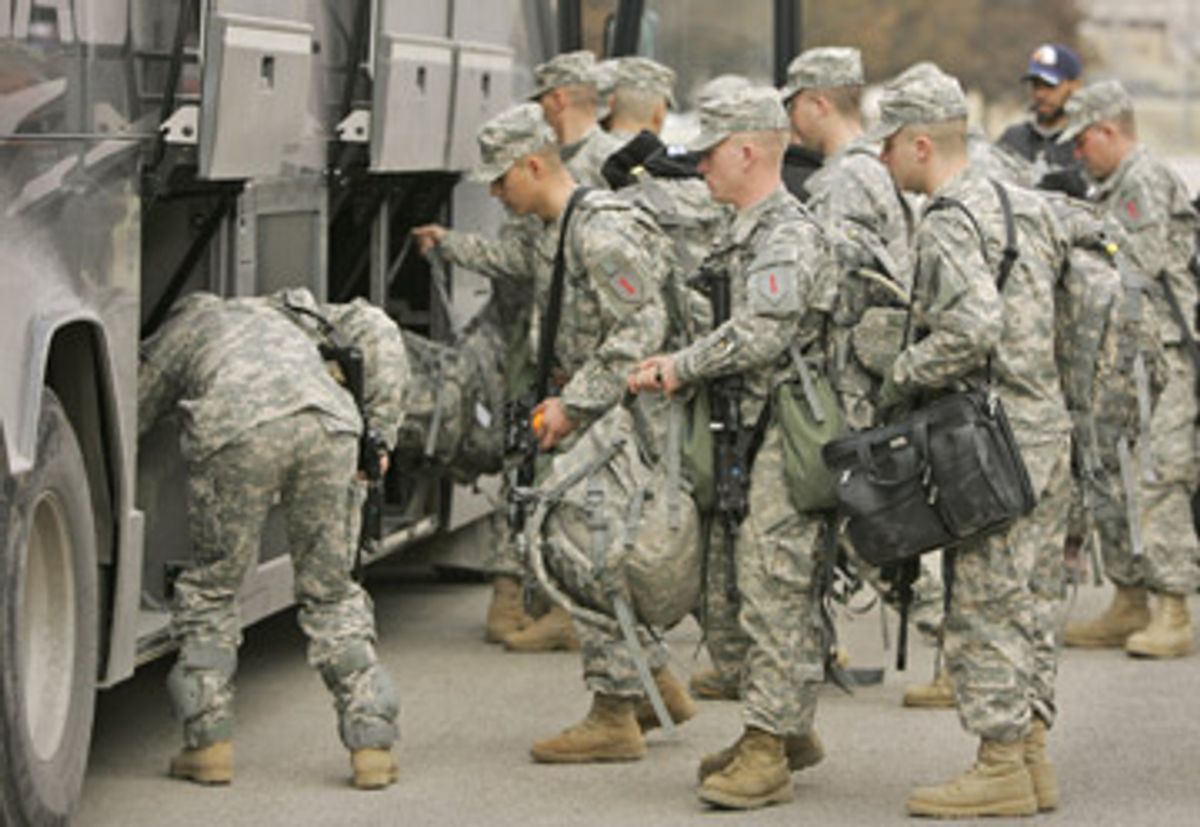 Over three days next week, the floor of the House of Representatives will become a wind tunnel of oratory, with most of the 435 members appearing before C-SPAN cameras to declare their support or opposition to President Bush's war plan for Iraq.

But beyond the swirling rhetoric, the debate over a non-binding resolution to oppose the surge of troops represents a first step in a long-range strategy by congressional Democrats to force a conclusion to the Iraq war. The effort has two important goals, say Democrats. On the one hand, they hope to put political pressure on vulnerable House Republicans so that more of them break away from the White House on Iraq policy. At the same time, they plan to use the power of the purse to restrict the president's ability to continue the war.

By next Thursday, when the non-binding vote is cast, Democrats expect as many as 25 to 30 Republicans to cross party lines and oppose the surge. "You are going to have a bipartisan majority on record saying, 'Mr. President we do not agree with escalating this war,'" said Rep. Jim McGovern, D-Mass., who is working with House leaders to craft the Iraq strategy. "If in response to that, the president does not bat an eyelash and continues to move forward, the political pressure on Republicans, and the frustration among a lot of Republicans that is already so evident, is just going to grow." On Thursday, Republican Whip Roy Blunt's office declined to comment on Democrats' prediction that more of their colleagues across the aisle would soon be joining them.

House members are also planning a series of bills between March and July that will fiscally limit Bush's ability to continue his current policy. The top defense appropriator, Rep. Jack Murtha, D-Penn., has been studying a number of proposals, hinging on concerns about military readiness, that would curtail the deployment of troops to Iraq. Murtha is also considering a proposal that would prevent repeated deployments of National Guard and Reserve forces, and a proposal to put greater limits on military contracting in Iraq.

"The non-binding resolution is the bark. The bite is going to come from the supplemental appropriations bill," said Rep. Jim Moran, D-Va., who sits on the Defense Appropriations Subcommittee. "The Republicans are going to have to vote on an Iraq supplemental that is very supportive of our troops, and yet is designed to bring them home quickly and safely. That is going to be the real vote that matters."

Behind all of the machinations is a sense among Democratic leaders and outside advisors that the war in Iraq will not end until members of the president's own party decide to confront the White House. "The war stops only when enough Republicans frightened by 2008 [elections] go into President Bush's office and say, 'You must stop the war,'" said John Isaacs, a lobbyist for the Council for a Livable World, who has been working on Iraq strategy with Democratic leaders. "President Bush is not up for election in 2008, but 435 House members and one-third of the Senate are."

In the past, both Democratic and Republican presidents have shifted direction in response to significant dissent from their own party. In 1968, Democratic President Lyndon Johnson abandoned a planned surge of more than 200,000 troops into Vietnam after being confronted by his own secretary of defense, Clark Clifford, and dovish leaders from his own party in Congress. More recently, Republican President Richard Nixon decided to resign during the Watergate scandal only after leaders from his own party in Congress said they could no longer support him.

By focusing on the funding debate on military readiness, Democrats hope they can open the door for Republicans to defect. "We're also trying to give Republicans a face-saving way to get out," explained McGovern. In the meantime, Democrats will attempt to insulate themselves from the Republican charge that they are abandoning troops in the field. In their efforts to thwart more deployments, they will aim to shift the focus from the cutting of funds to the issue of military readiness. As the war has continued, the military has been forced to outfit some fighting units sent to Iraq by stripping equipment from those at home, making it harder to train well here, and degrading the readiness of stateside units.

House Armed Services Committee chairman Ike Skelton has compared this pattern to eating the military's "seed corn," saying it has endangered the nation. By most accounts, the lack of military readiness does present a serious long-range problem. The Iraq Study Group report, for example, recently noted that less than a third of Army units are currently at high readiness levels. The outgoing Army chief of staff, Gen. Peter Schoomaker, testified in January that troops had been deploying to Iraq without all of the equipment they needed. "It's so terribly important that we do the very best we can to have ready forces here in the United States," Skelton told reporters Thursday.

Similar concerns have been expressed in the Senate. Last month, Sens. John McCain, R-Ariz., and Carl Levin, D-Mich., sent a letter to the Pentagon asking the secretary of defense to confirm that all troops sent to Iraq are "fully equipped and trained." The Senate has been deadlocked since Monday on a plan to debate resolutions of support and opposition to Bush's surge plan. Seven Republicans who are likely to oppose the president's plan, including Chuck Hagel of Nebraska and John Warner of Virginia, wrote a letter to Senate leaders Wednesday calling the current stalemate "unacceptable." "We will explore all of our options under the Senate procedures and practices to ensure a full and open debate on the Senate floor," the senators wrote, suggesting they might attempt to attach a resolution critical of the president's Iraq policy as an amendment to another bill.

Meanwhile, House Republicans have been playing down the importance of next week's debate. In a meeting with reporters on Thursday, Minority Leader John Boehner called the non-binding resolution a "meaningless political stunt," but declined to predict how many Republicans might oppose the president. "There are Republicans in the House and the Senate who are skeptical of the president's plan. That's well known," Boehner said. "But I do believe the majority of Republicans support the president's effort and his goal of winning Iraq."

Asked to describe his conversations with Bush about the pressures on Republicans in the House, the minority leader demurred. "He understands," Boehner said. He did not elaborate.