"The Lives of Others"

This Academy Award-nominated film explores life in East Berlin under the Stasi -- and what it means to be human. 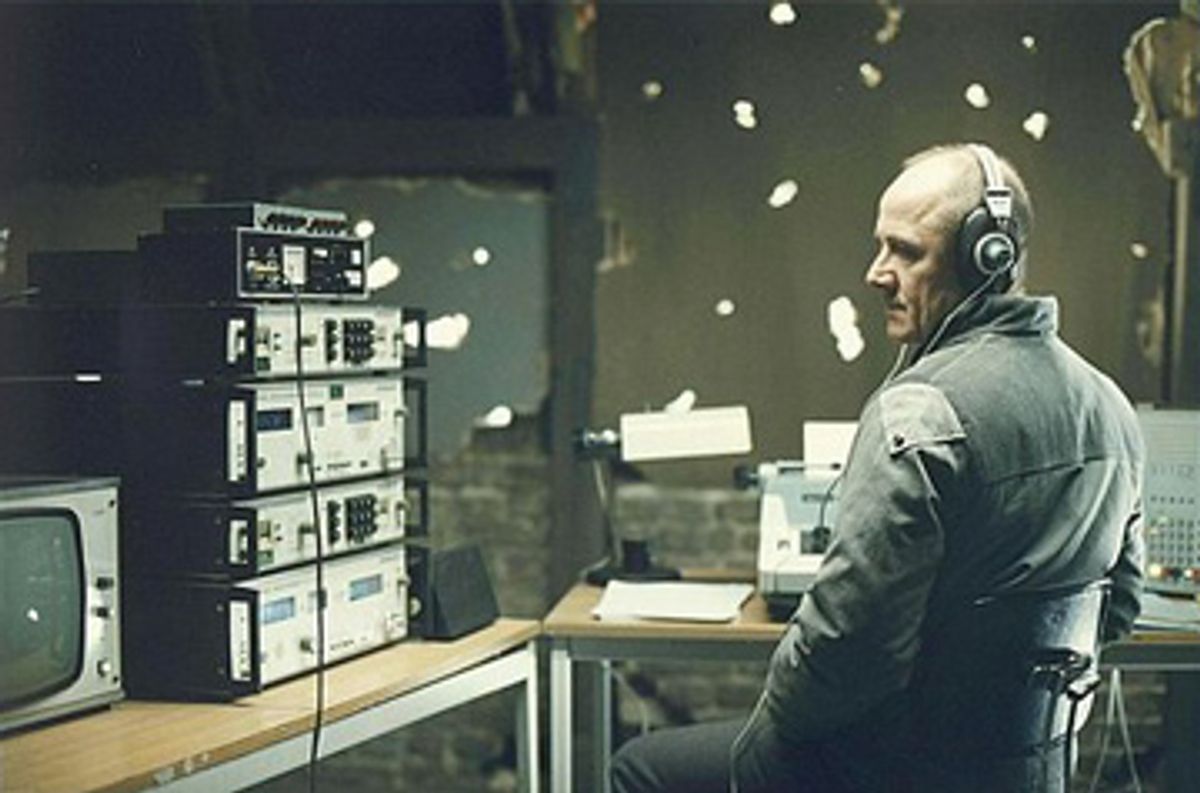 "The Lives of Others," set mostly in East Berlin in 1984, five years before the fall of the Berlin Wall, opens with a respected Stasi surveillance expert standing before a roomful of students, instructing them in the proper way to intimidate a suspected -- that is to say, confirmed -- enemy of the German Democratic Republic. He plays an audiotape of an interrogation on a primitive-looking (even for the '80s) grayish tape machine. Unlike the students, we have the advantage of seeing the interrogation as it unfolds (the film cuts between the classroom and the interrogation): The officer in charge alternately flatters and browbeats his subject in a kind of perverse seduction. At first, the detainee sits defiantly upright in his chair; by the end, having been deprived of sleep -- for how long, we really don't want to know -- he slumps into a confessional heap, ready to sign any document placed in front of him.

A student raises his hand to ask a sensible question: "Why keep him awake so long? It's inhuman." The instructor, a civil servant whose mask of rehearsed sternness may be hiding his own exhaustion, answers the question. And then, with furtive purposefulness that might be melodramatic if it weren't so utterly believable, he looks down at his seating chart and marks the kid's place with an X.

As openings go, this one isn't particularly graphic or even suspenseful: The camera movement is almost placid, as if it were faking disinterest. But the sequence gives a firm sense of a country in which paranoia is a part of the air, like a toxin leeching oxygen from it. And with it, director and writer Florian Henckel von Donnersmarck begins building the layers of emotional texture that ultimately make "The Lives of Others" -- an Academy Award nominee for best foreign-language film -- so moving, and so deeply satisfying.

The instructor we meet in that opening sequence, Gerd Wiesler (Ulrich Mühe), is the kind of upright citizen you can identify on sight: Loyalty to the state has been ground into his bones. At the behest of seedy fat cat Minister Bruno Hempf (Thomas Thieme), Wiesler is assigned to monitor the lives of a famous playwright, Georg Dreyman (Sebastian Koch, solidly handsome in a Peter Jennings kind of way), and his charismatic actress girlfriend, Christa-Maria Sieland (Martina Gedeck, in a muted, beautifully shaded performance), even though the couple have a spotless record of obedience and compliance.

So Wiesler and his crew tromp over to Dreyman's apartment, and, while he's out, install the necessary network of bugs and wires. Their M.O. is comically obvious: They show up in broad daylight, in their monotone coats and cheap poplin zip-up jackets. They even set up a ladder outside the front door. Their tactics are less about secrecy than overt intimidation -- it actually benefits them if the neighbors see them poking around, scaring these witnesses into keeping their mouths shut.

But once Wiesler starts listening in on the couple -- with his tape reels and headphones, he's stationed above them in a dim attic, a quiet, rustically spartan setting that hovers in the gray area between coziness and loneliness -- the unthinkable happens: An uninvited guest at their parties, an invisible witness to their comings and goings, their casual conversations, their lovemaking, he falls into a kind of love with them.

Wiesler's response to those feelings -- which move in on him imperceptibly, with very little telegraphing, making them that much more convincing -- are both the soul and the foundation of the "The Lives of Others." This is a teasingly complex political thriller, but it's also a sort-of romance, and Wiesler is its unlikely hero. Mühe (who appeared in Michael Haneke's "Funny Games") is a preternaturally solemn-looking actor: As Wiesler, his eyes may be furtive, but they're not vacant. His body language is that of a man who's never even dared to jaywalk: Zipped into a colorless sub-Members Only jacket, sometimes with the tails of his suit jacket hanging below, he walks with certainty but not confidence. Von Donnersmarck and his cinematographer, Hagen Bogdanski, show us an East Berlin painted in drab GDR-approved greens and grays, as if the government had fitted the sun with a special lens to filter out any inappropriate color. It's a setting where Wiesler can easily blend into invisibility: When he slips into his apartment, a tiny box of beige situated in a featureless high rise, we understand intuitively why he'd gravitate even to the warmth of the sounds he hears coming from Dreyman and Christa-Maria's flat -- an old-style Berlin affair with high ceilings and rich old woodwork, furnished with comfortable old pieces left over from a time when privacy in one's home wasn't a privilege but a right.

This is a couple with secrets, and they're heavy to bear: Christa-Maria fully enjoys the benefits that her fame has brought her, but they come with a price. And Dreyman may be politically neutral, but he's stood by too placidly as some of his closest friends have suffered. "The Lives of Others" uses a specific historical setting to cast a much wider net: This isn't just a story about the oppressiveness of the GDR, but about the way even imperfect human beings can tune in to their best impulses, and make choices that will allow them to live with others, as well as themselves.

Mühe's performance is wonderful -- he's miraculously somber and expressive at once -- and in the movie's last moments, he's allowed a moment of boundless joy that feels like a salve. That's essential, because "The Lives of Others" takes place in a joyless world: In the GDR, informers numbered 200,000, out of a population of 17 million. Neighbors, friends and family members commonly informed on one another. (In an interview included in the press notes for "The Lives of Others," von Donnersmarck says that Mühe himself learned, after the wall came down and Stasi records were made available to the public, that his then-wife had spied on him and other actors in the early '80s. She has denied the claims, despite 254 pages' worth of government records detailing her activities.)

But while von Donnersmarck's picture doesn't soften the repressiveness of the GDR, or its effect on regular citizens who were simply trying to live their lives, it's far from depressing. Von Donnersmarck seizes upon telling details: In one sequence, as Minister Hempf paws at a female conquest, we get a flash of his giant white underpants, a touch that would be funny if it weren't so subliminally horrific. But von Donnersmarck's aim in "The Lives of Others" is to show not how fragile human beings are, how susceptible they are to fear and coercion, but to underscore their capacity for compassion and change, and to remind us that our yearning for joy and pleasure is part of what keeps us alive. In "The Lives of Others," the finer qualities of human beings can never be squelched, not even by overfed officials in state-approved underpants.