Despite a few riveting performances, the hopelessly square industry music awards go out not with a bang but with a (baby) boom! 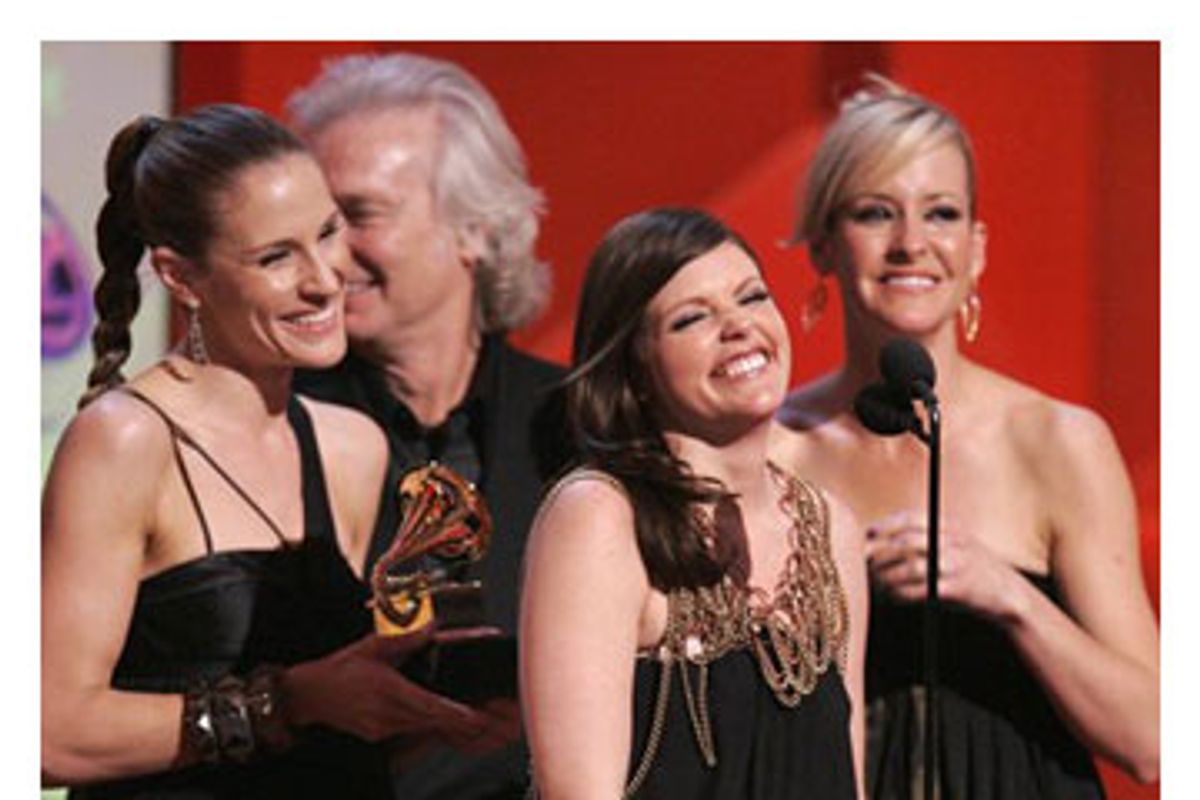 Oh, to have been a fly on the wall during the production meeting before last night's Grammy Awards. I imagine it went something like this: A hopelessly out-of-touch baby-boomer industry bigwig dumped a pile of his favorite albums on a boardroom desk, said "make it happen" to a bunch of yes people and walked out. How else to explain such a backward-looking and tone-deaf production?

Sure, the Dixie Chicks walked away with the night's biggest awards. In the evening's lone display of good sense, Natalie Maines, Martie Maguire and Emily Robison's win for album ("Taking the Long Way"), record and song ("Not Ready to Make Nice") of the year was a thumb in the eye of all the conservative country radio yahoos who dropped the Chicks from their playlists after Maines criticized Bush at a 2003 London concert. But that was a rare reprieve from the nostalgiafest. It kicked off with a band, the Police, that hadn't played together in over 20 years. The shockingly well-preserved Lionel Richie dropped by to sing "Hello." Earth, Wind & Fire and Burt Bacharach made appearances. Smokey Robinson was dusted off to sing "The Tracks of My Tears." And, most mind-blowingly, there was a three-song tribute to those young tyros the Eagles. Ladies and gentlemen, I give you the 2007 Grammy Awards.

It was actually sort of fitting that the show began with a song about a hooker ("Roxanne") because the lackstravaganza that followed exhibited all the decision-making smarts and sensitivity of a cheap one-night stand. Justin Timberlake, pop music's most kinetic performer, was stuck behind a piano for the first of his two appearances. The cryptic jazz genius Ornette Coleman was paired as a presenter with Natalie Cole -- I guess because their last names have a syllable in common. Noted head-banger Al Gore earned loud applause when he and Queen Latifah presented the award for best rock album to the Red Hot Chili Peppers. Beyoncé sang a song, "Listen," that wasn't nominated for a Grammy (but was for an Oscar, where she's expected to again perform it in a mere two weeks). MTV's Video Music Awards apparently lent its hokey fraudience, which filled the space at the foot of the stage and gyrated obediently during the performances. Then there was this whole weird biz where television viewers were repeatedly implored to vote to give one of three pretty young things the chance to duet with Timberlake. Having never seen any of these girls before, I was thus hard-pressed to care when one of them (Robyn Troup) ended up singing "Ain't No Sunshine" and "My Love" with J.T. The one time Timberlake was free to dance, unencumbered by a baby grand, he's paired with an amateur.

A possible clue to the evening's origins came when, during his brief speech telling everyone how amazing the National Academy of Recording Arts and Sciences is, academy prez Neil Portnoy revealed that seeing Elvis on TV when he was 6 years old made him realize what he wanted to do with his life. That fact was instructive. It makes sense that the Grammys -- so soulless and bland -- are headed by a man who saw Elvis on TV and thought: "I want to be a record executive."

Still, there were a handful of performers whose charisma and talent cut through the crap. Mary J. Blige -- who took home three awards -- proved herself incapable of delivering anything less than a riveting performance when she tore her soul out during "Without You." Another one of the night's big winners, the Dixie Chicks, looked beautiful and sang even better when they performed "Not Ready to Make Nice." Teen R&B sensation Chris Brown threw off sparks with his explosively athletic dancing during "Run It." Christina Aguilera paid fitting tribute to James Brown with a wailing rendition of "It's a Man's Man's Man's World." Cee-Lo Green and Danger Mouse of Gnarls Barkley brought a welcome dose of weirdness when they performed a slowed-down, beefed-up version of their schizo-soul number "Crazy" while dressed as airline pilots. And Blige brought the goods a second time when she returned toward the end of the broadcast to sing the hook on rap album of the year winner Ludacris' ghetto tragedy "Runaway Love." Of course, this being the Grammys, the Blige/Luda fireworks were quickly doused by having James Blunt immediately follow them with his inescapable wet noodle of a ballad, "Beautiful."

The presenters generally fared about as well as Blunt. Scarlett Johansson and Don Henley put themselves in the pole position to star in a remake of "Adam's Rib" with the following exchange:

Henley: So you're recording your first album?

Johansson: Yeah. Do you have any advice for me?

And what was wrong with Pink, who seemed bored and pissed off as she stood, hand on hip, and presented a lifetime achievement award to the Doors (timely!) with all the enthusiasm of an employee at a McDonald's drive-through window. Although to be fair, anyone would have a hard time mustering enthusiasm for lines like: "The Doors lit a rock fire that's burning to this day." But there was no excuse for Quentin Tarantino's behavior, as he appeared under a greasy slick of hair that looked like a 45 had melted on his head and affected his bizarre Noo Yawk accent while presenting the nominees for record of the year. Tony Bennett stood alongside Tarantino and smiled amiably, old pro that he is.

It's true that the Grammys face a series of challenges that the Oscars and Emmys don't have to deal with. There are too many awards with too much overlap, meaning we see the same faces on the podium too many times. And musicians, unsurprisingly, tend not to be the best public speakers, which results in endless lists of thankees read off cue cards -- I stopped counting when Blige's roll call zoomed past 30 names on her first trip to the podium. The obvious counter to these problems -- more music from today's stars -- was ignored. The electric Chris Brown was jammed behind Robinson and Richie. Carrie Underwood sang "Desperado" instead of her own smash, "Jesus Take the Wheel." Contemporary acts (and eventual winners) Wolfmother and the Flaming Lips were relegated to the untelevised portion of the event. Breakthrough rapper T.I. merely performed a guest verse on Timberlake's "Sexyback." Hell, what was the point of flying in Super Bowl showstopper Prince from his purple planet just to have him say, "One word, Beyoncé"?

Jeff Lebowski had it right: "The fucking Eagles?"