Care for something saucy?

A tour of the world's most infamous aphrodisiacs, from dog penis and prunes to swallows' hearts and spaghetti puttanesca. 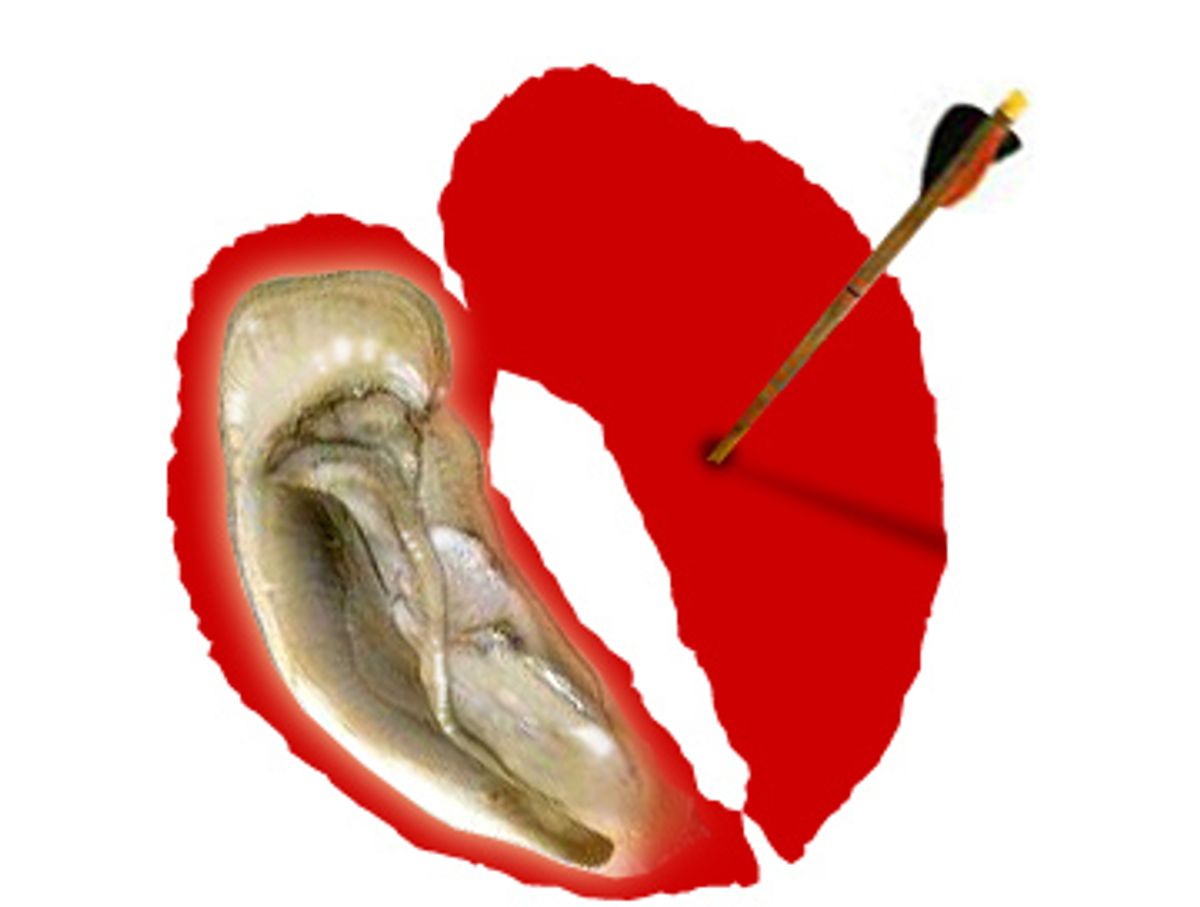 Consider the oyster. Found all over the world, the common bivalve isn't pretty: The gray mottled shell is pock-marked and plain, its uneven halves don't quite fit together. Yet as an inducement to love, its reputation is unequaled. The Roman satirist Juvenal heartily endorsed it, and the 18th century courtesan Marquis de Pompadour deployed it -- along with chocolate and celery -- in her seductive arsenal. (Another of her contributions to sex appeal: Elvis' hairdo.) Casanova sucked down 50 raw oysters each morning while lolling in his bath, gazing at the next gal in line. Even today, young and old men in New York's Little Italy stand at neighborhood oyster bars downing a half-dozen as an inspiration for the evening's activities. It's about the only aphrodisiac everyone can agree on. After all, Aphrodite was spawned from an oyster shell.

But why oysters? Perhaps it's because, when the shell opens, they bear a blush-inducing resemblance to the female anatomy. There's certainly a curious thrill to teasing a raw oyster out of its shell using only your tongue and teeth, and lapping the juices. In addition, the texture of these slippery creatures resembles the amorous excretions of both sexes. As a friend observed after consuming his first raw oyster, "It's like the King of England coming in your mouth."

In a taxonomy of reputed aphrodisiacs, the oyster establishes an important principle. Specifically, the notion that an aphrodisiac is effective to the extent that it resembles a sex organ is called "mimesis." Only a handful of aphrodisiacs are vaginal -- most notably the fig, the peach (Remember "Eat a Peach" by the Allman Brothers?), and epithelial orchids, which were made into a slew of potions in France and India during the Middle Ages. When it comes to getting it on, more aphrodisiacs claim to aid in getting it up -- and so are modeled on the penis. Raw leeks, carrots and celery are common mimetics that are prized in many cultures. More ambitiously amorous chefs might try the Kama Sutra's recipe, which suggests boiling asparagus in a combination of cow's milk and ghee, flavoring it with lots of anise. That's anise, not anus.

The Arabs swallowed live skinks -- slippery, long-tailed lizards -- as an inducement to manly feats. Snake blood is another popular aphrodisiac, based on the facile resemblance of penis to snake; some parlors in Malaysia still offer the reptiles perforated near the tail for easy drinking. The Turks preferred satyrion root (the name says it all), a substance so powerful it prompted 17th-century scientist Athanasius Kircher to exclaim, "Odd, they'll make one old fellow of sixty-five cut a caper like a dancing master." Ginseng serves the same purpose today, although the root is thought to resemble the whole man rather than just the dangling participle.

Aphrodisiac enthusiasts are anything but subtle: Tiger penis or, indeed, the member of any animal thought to display manly characteristics (even the dog -- larger canines preferred), is always en vogue. Intrepid Australian traveler Paul Bakker recounts his experience eating at a unique North Korean restaurant. Ushered late one evening by his state-appointed guides into a low concrete building, with a disco ball, that was part restaurant, part karaoke bar, Bakker discovered that the table d'hôte was pooch. The specialty, considered a form of health food throughout Korea (though I've also eaten dog in Queens, N.Y.!), was served in a series of courses beginning with the backbone, then proceeding through barbecued ribs and on to a series of stews. When Bakker's translator announced that the most important part of the meal was about to arrive, he referred to it as the middle leg. Observed the author, "The shape was unmistakable. As if on cue, a drunken Korean jumped up from the next table and started belting out a patriotic folk song." Bakker doesn't report what it tasted like, or what he was inspired to do after the meal.

Of course, you don't have to go to all the way to Korea to enjoy the revivifying effects of animal penis. Even in the U.S., most Jamaican eateries serve up cow cod soup on the weekends, a thick pottage of the bovine member cut up into little gelatinous pieces and mixed with roots and herbs selected for their similar therapeutic effects. This soup is used more for prophylaxis than for remedial purposes, and, come Saturday night, no Jamaican man feels embarrassed about fortifying himself with a serving in full view of the other diners. When you give it a try, wash it down with one of the roots tonics that are available in the same restaurants, and which sport unmistakable names like Front End Lifter, Tan-Pon-It Long or Agony Drink.

When it comes to sexual comestibles, though dick is desirable, balls will do, too. Rocky mountain oysters, a popular euphemism for bull testicles in the Western United States, cleverly uses one aphrodisiac to refer to another. Next time you're in a Middle Eastern restaurant, scan the menu for "lamb fries," the evasive moniker for charcoal-grilled testicles. I once led a pair of families, children in tow, to a Lebanese restaurant in Astoria, Queens. Along with a dozen or so familiar dishes, we ordered a plate of lamb fries, not quite sure what to expect. When they arrived, the tender meat was instantly recognizable by its almond shape. Imagine our surprise when the young children in our party, who had eschewed most of the food placed before them, fell on the testicles like ravenous dogs. Gradually turning red, the parents watched in silence. They made a pact never to reveal the nature of the meat to the kids, fearing years later they'd be accused in court, kids shouting from the witness stand: "They forced us to eat animal testicles!"

Of course, demanding that aphrodisiacs resemble sex organs is a rather simple-minded approach, and there are still many prescriptions that depart from the formula. As an invitation to erotic adventures, almost any well-prepared meal can be effective (especially if it's served with a few bottles of limb-loosening wine). According to the Marquis de Sade in "Juliette": "le bon dîner peut causer une volupté physique" ("a good dinner generates a physical voluptuousness"). Spicy food is especially stimulating, and anise, cinnamon, saffron, garlic, black pepper, white pepper and chili peppers are all thought to have aphrodisiacal properties -- the last three perhaps because they generate a hot sweat, just like sex, and a glow that lingers in the digestive tract.

When introduced into Europe from South America in the 16th century, the tomato earned the name "love apple," and even today, foods that are both tomatoey and heavily spiced are often referred to as "lusty." All red-sauced Italian fare fits this category, especially puttanesca, in which several erotically efficacious ingredients come into play at once. This "harlot's sauce" associated with Naples and Calabria contains tomatoes, red peppers, garlic, onions, anchovies and capers. Eat some poured over, say, penne cooked al dente, and see if it doesn't make you feel like loosening your belt.

Other amorous edibles run contrary to logic. In Elizabethan England, prunes were provided free of charge in brothels. It sounds absurd, but then who knows what they were doing in there? Other favorites of the time included dates, quinces and potatoes -- just arrived from the New World and thought to have magical properties. Brillat-Savarin, waxing overly poetic, asserted that truffles induce "erotic and gastronomic ideas both in the sex wearing petticoats and in the bearded portion of humanity." And Eugene Duren, in his 1901 commentary on Sade, reports that "In some parts of Germany men eat flatulent foods like beans, peas, lentils, and radishes in order that they may attain powerful erections by way of the accumulated gas." Don't try this at home!

Chocolate has always been a popular choice among lovers, although opinions vary as to its efficacy. One anonymous 19th-century pornographer called it "fit for serving maids ... an incentive working not upon the body but upon the mind. It generates a complacent and yielding disposition." Another warns against it, at least for men: "in liquid form it is hot cocoa ... filling your guts with slimy warmth which drives away all thoughts of gallantry." These days, conventional wisdom dictates that chocolates are most effective when delivered to your sweetie in an oversize heart-shaped box.

But maybe you want to give just plain hearts? Swallows' hearts were among the list of popular medieval aphrodisiacs, as were, by the same reasoning, any pair of lovebirds, like turtle doves baked in a pie. Other unexpected aphrodisiacs of the ages included menstrual blood, fat from a camel's hump, the wings of bees, the powdered tooth of a corpse, male or female hedgehog genitals, bat blood mixed with asses' milk, and salted crocodile. The application can be even more absurd than the ingredient, whether intended to stimulate a flagging manhood, or induce a greater receptivity in the love object, or both. Mathiolis, a medieval German pharmacist who gave his name to several plant species, even recommended refining the camphorlike crystals from the flesh of a civet cat and rubbing them on the penis; a salve of fresh ginger serves the same purpose.

But now that I think of it, rubbing anything on the penis would probably work.