Sound and fury over Iraq

Democrats say no to the Bush surge. Republicans are outraged. Adolf Hitler and Robert Frost are invoked. Tuesday's debate in Congress signified, well, you know how the line goes. 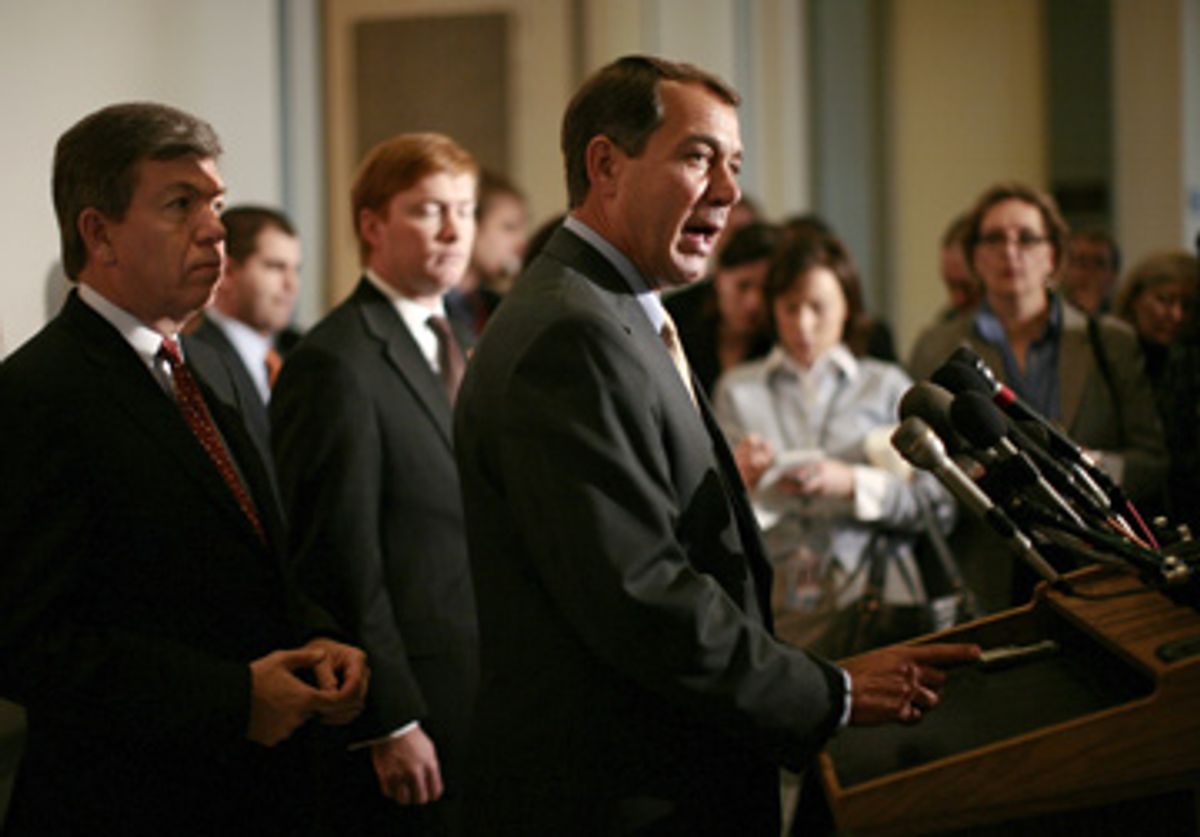 The congressmen and women, all fire and brimstone, pour onto the House floor and vent their rage before the cameras. They know the nation is watching, and they are not going to take it anymore. Before them is a matter of war and peace, blood and treasure, American boys and Iraqi deserts. For a moment, let politics as usual be damned. "We do not have time to waste on cheap political resolutions," thunders one statesman. "A hollow effort," another calls out. "This resolution -- a nonbinding sense of the House -- is not a policy statement. It is a political strategy," declares a third.

The date is June 16, 2006, and the Democrats are hurling their protests like darts at overinflated Republicans, who still control Congress. After weeks of promising an open debate on the war, the Republican leadership put forward a unilateral bill that declares that America should succeed in the "Global War on Terror," be victorious in Iraq and honor soldiers who fight and die. They have barred any amendments. "Republicans shut down debate with a closed rule," protests Nancy Pelosi, who is still the minority leader. "It is an affront to the American people." The result is a with-us-or-against-us tap dance, a vaudeville version of debate. Before it is over, 42 Democrats, each one wary of a political trap ahead of November elections, have crossed party lines to effectively support the president's policy in Iraq.

Fast-forward eight months, to Tuesday. Now the Democrats control Congress, and they have promised an open debate on the president's new strategy in Iraq. But at the last minute, they put forward a simple resolution, 94 words long, that cannot be amended. It says that Congress supports the military but opposes President Bush's plan to send more troops to Iraq. The Republicans react with predictable outrage. "The resolution before us is a shallow political document," declares Pete Hoekstra, a Republican from Michigan. "A political charade," charges Minority Leader John Boehner of Ohio. "This resolution," says Jack Kingston, the Georgia Republican, "is not real."

Accusing a politician of hypocrisy is like calling a preschool child underdeveloped. This is what politicians do -- they play the rhetorical game, and they play to win. Speaker Pelosi does not miss a beat. "In a few days, in fewer than 100 words, we will take our country in a new direction on Iraq," she says, wearing her trademark purple suit. "The vote will signal whether the Congress has heard the American people."

The Democrats are repeating the Republican maneuver, matching the nonbinding tap dance step for step. But this time, the backdrop in Iraq is even darker, as is American public opinion about the war. And whereas the Republicans sought last summer to end a discussion on Iraq, the Democrats are offering a preview of perhaps a much more critical debate yet to come. Boehner acknowledges the coming showdown, albeit with compulsory Republican spin: "There is going to be a real debate here sometime in March over defunding our troops that are in harm's way or somehow shielding the military's ability to do its job."

This time, everyone has been calling the nonbinding resolution the "first step" in the coming debate over Iraq. The Democratic appropriators have been saying those two words for weeks, as has caucus chair Rahm Emanuel. Now Republicans have started to say them, too. The next steps are in the hands of the appropriators, who dole out treasure from the national chest. Pennsylvania's Jack Murtha, the military hero who wants out of Iraq, has laid out most of the plan. As the top military appropriator, he will put forward a bill in March that limits repeat deployments to Iraq and requires a higher bar for training and equipment, and otherwise cramps President Bush's surge plan. The Republicans seem eager to fight that battle. "America should see this move for what it really is," declares Missouri's Roy Blunt, the Republican whip, during the debate on the resolution. "A political first step to cutting off funding for the dangerous mission our troops face."

In the meantime, Democrats are hoping to make the "first step" hurt for Republicans. Everyone has been reading the polls: On Tuesday morning, Gallup announced that 63 percent of the nation wants a timetable for troop withdrawal by the end of next year. About 57 percent want a cap on troop levels. Only one in three Americans thinks President Bush is doing the right thing. This is a bonanza for Democrats. They want Republicans on the record choosing the president over public opinion. No one knows how many more will bend to political pressure to desert the commander in chief.

Republicans expect to lose as many as 20 of their members in the vote on Friday. Democrats whisper that twice as many could jump. Boehner is trying to put a strong face on it all. "This isn't about elections and this isn't about politics for most of our members," he says, in a meeting with reporters in a basement conference room. He looks back-from-the-beach tan despite the snowstorm outside. "If I get defeated over doing what I truly believe is right for the country, I can live with that."

After a midday vote, Connecticut Republican Chris Shays steps out into the lobby off the House floor. The fireplace is lit, and Shays is adding some vigorous spin of his own. Never mind that a couple months before last year's election, which he almost lost over the issue of Iraq, Shays publicly called for a one-year timetable for withdrawing from Iraq. Now, he says he will not vote with the Democrats who oppose the surge. "Now we have a resolution that says we want the status quo," Shays says, repeating a talking point handed down from the Republican whip.

Indeed, Republicans like Shays are arguing that Bush's surge of troops is a plan for change in Iraq, making those who oppose Bush's plan defenders of the old way -- that is, President Bush's old way -- which has not worked.

At a morning meeting with reporters, the Democratic leader, Steny Hoyer, chuckled at the intellectual acrobatics. "That sounds to me a little bit like Alice in Wonderland," he said. "There is nobody in this room, there is nobody in America, that believes opposing the president's plan for escalation is staying the course."

Shays was not in the room at the time.

On the House floor this week, Republicans and Democrats will each have 18 hours to debate Iraq. Each member of Congress will get five minutes. The debates will go until midnight, and if Tuesday was any indication, lofty recriminations will fly: On Tuesday alone, members of Congress invoked the memories of Dwight Eisenhower, Neville Chamberlain, Adolf Hitler, Abraham Lincoln, Gen. Douglas MacArthur and the poet Robert Frost. Al-Qaida propaganda was read at length, and poster boards displayed the mugs of terrorists and foreign leaders. It was a messy, contradictory exercise, one that will continue for two more days.

Then, on Friday, the lawmakers will vote on the latest nonbinding resolution, as the war in Iraq grinds on.