Debate tonight with Frank Gaffney. Lincoln and Eisenhower were both "antiwar traitors." Following through on "war rhetoric"

(1) I noted earlier that I would be on the Alan Colmes Show tonight at 11:00 p.m. EST tonight. What I did not note -- because I did not know until just now -- is that I will be on with Frank Gaffney, author of that authoritarian tract in The Washington Times yesterday which, merely among its many sins, relied upon a fictitious quote from Abraham Lincoln and called for the hanging of Carl Levin (and, just incidentally, despite being well aware of the fictitious nature of the quote, this is what one finds on The Washington Times website right now, with no correction): 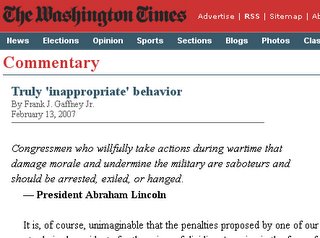 That is really very responsible journalism by The Washington Times -- leaving up a "quote" from a former President calling for the execution of anti-war Senators even though they know full well that the quote is a total fake (and see UPDATE below).

In any event, I'm looking forward to the discussion with Frank Gaffney tonight. You can find local listings or listen to the live audio feed here.

(2) Speaking of Gaffney's argument (which is only a more extreme version than the standard one which has been advanced by the likes of Joe Lieberman and Dick Cheney), Barbara O'Brein and Mona at High Clearing document the aggressive anti-war activities of Abraham Lincoln and Dwight Eisenhower, respectively, even when -- to use the standard, manipulative cliche -- "American troops were in harm's way." As O'Brein said about Lincoln's outspoken 1848 opposition to President's Polk war with Mexico: "Good thing nobody hanged Mr. Lincoln back in 1848, huh?"

(3) In response to a post which Blue Texan wrote, which criticized the suggestion made by Glenn Reynolds that the U.S. deploy death squads to kill Iranian scientists and "radical" mullahs, Blue Texan received an email from right-wing blogger Jeff Goldstein in which Goldstein voiced one of the standard lines heard from those who crave war with Iran: "And Iran declared war on us when they took hostages from our embassy in 1979. So they are indeed at war with us, for whatever that's worth to you." As Blue Texan replied:


By the way, if Iran has been "at war" with the United States continuously since 1979, why did the Reagan administration sell them weapons? It doesn't seem like a good idea to sell a nation you're at war with, you know, actual weapons and stuff.

The claims neoconservatives advance do not even make any sense any more. When you explain to them that we are not actually at war with Iran, they will insist that we have actually been at war with Iran since 1979 -- even though their icon and hero, Ronald Reagan, spent the 1980s supplying the Iranian regime with highly sophisticated weaponry. As we learned in 2002 and 2003, for them, war itself is the end. The "justifications" are but the means used to arrive there.

(4) One of the most notable aspects of the rhetoric used by Bush followers -- particularly their shrill insistence that the Global Epic War of Civilizations/World War III/World War IV (or, as Gaffney called it in his column, The "War for the Free World [that] began on September 11, 2001") -- is how obvious they make it that they do not actually believe their own rhetoric.

They oppose any real sacrifice that would enable us to "fight the war" much more effectively (such as a draft or increased taxes), oppose virtually every counter-terrorism measure that does not involve either fun new wars or fewer limits on presidential power (such as the boring proposals for more rigorous port inspections, which these advocates of the $8 billion-per-month Iraq war have the audacity to oppose on grounds of cost), and worst of all, their constant prioritizing of relatively petty concerns over their vaunted "terrorism war" (such as Orrin Hatch's recent demand that Alberto Gonzales devote more FBI and other law enforcement resources to combating the Evils of Online Pornography rather than, say, hunting down all the lurking Al Qaeda cells about to unleash radiological bombs in our children's school houses).

Steven Taylor looks at a particularly egregious case of this phenomenon -- where the Bush administration sacrificed potentially critical assets in the fight against the Taliban and Al Qaeda in Afghanistan all in order to pursue someone they believe is associated with drug smuggling. As Taylor says (and the whole post is worth reading):


The administration makes claims that the war on terror is an existential struggle that requires extraordinary actions, including a number of highly questionable domestic surveillance programs and "coercive" interrogation of possible terrorists as well as potentially their life-time incarceration; however, we can't recognize the imperfect nature of potential allies such as Noorzai? We prefer a drug arrest to progress in a central front on the war against radical Islam?

They only get excited about their Grand Global War of Civilizations Which is More Important Than Any War Ever when it can be used to justify starting wars, blowing things up, increased surveillance on Americans, and breaking laws. Everything else -- genuine measures to combat terrorism -- bores them, and true counter-terrorism measures always are subordinated to their other priorities, whether it be tax cuts or the Drug War. The hallmark of an inauthentic belief is a refusal to sacrifice for it. When it comes to their Glorious War, the Bush administration and its followers ooze nothing but a refusal to sacrifice.

UPDATE: Republican Rep. Don Young of Alaska just cited the "Abraham Lincoln quote" as part of his remarks on the Iraq Surge Resolution being debated in the U.S. House of Representatives. Link and (hopefully) You Tube clip to follow; though I did not hear it myself, I have heard it from enough people to feel confident stating it.

So, The Washington Times continues to keep the falsified quote up on its site, and a pro-war Congressman now enters it into the Congressional Record in order to argue, presumably, that his anti-war colleagues are commiting treason. That is a fairly significant fake quote to knowingly keep disseminating.

It's clear that they do not care if the quote is true or false. They will just keep using it and it will eventually become true -- that Abraham Lincoln advocated the execution of anyone who opposed wars (even though he himself did exactly that -- see Item 2 above). But Amanda Marcotte used bad words about a religion she does not believe in, and so that is where our real outrage should be focused.

UPDATE II: John Cole and his commenters are learning the Frank Gaffney Method of political argumentation.