Beltway pundits perpetuate the most distortive myths about the gravest matters of war and peace while endlessly touting their own "seriousness."

David Broder has a Washington Post column this morning in which he declares that "President Bush is poised for a political comeback" all because of some supposedly ingenious rhetoric and strategic tricks Bush employed in his generally ignored Press Conference yesterday. It really never ceases to amaze how out of touch with both American sentiment and basic reality is the Beltway pundit class -- as though Americans are going to re-evaluate their fundamental dislike of the President and their contempt for this war because of some clever phrasing and political tactics Bush invoked in his Press Conference.

Beltway pundits have long been petrified of the reality that most Americans have turned against the President permanently and with deep conviction. Because the David Broders of the world propped up the Bush presidency for so long, they are deeply invested in finding a way to salvage it. They do this exactly the same way -- driven by the same motives and using the same methods -- that they refuse to accept the reality that the Iraq war which they cheered on and enabled is a profound failure, and are therefore intent on finding a way to salvage at least the apperance of success, if not the reality.

The collapse of Bush's approval ratings is not some isolated or fleeting event that can be reversed with a few magic tricks from Karl Rove. Americans who once vigorously supported the President have simply abandoned him over time. Contrary to Broder's desire (masquerading as belief), the contempt with which Americans regard the Bush Presidency is not some recent, fleeting, reversible phenomenon. Instead, the Bush presidency has been steadily collapsing over the last two-and-a-half years: 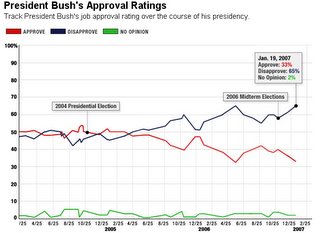 Simply put, as Americans have come to see what George Bush really is, they have inexorably turned against him. It is not some petty scandal or momentary intemperate outburst from the masses. The Bush presidency has collapsed because Americans, with emotional distance between themselves and 9/11, were emancipated from the fear-mongering which was the administration's sole weapon, and gradually realized the extreme corruption, dishonesty, and ineptitude which drives this presidency. And yet all along the way, the David Broders have repeatedly insisted that Bush was on the verge of some grand "comeback," as though eventually, the poor, confused Americans would come to their senses and realize what a decent and honorable man the President really is.

Most of Broder's column is just boilerplate Broderisms, principally characterized by swooning homages to contrived bipartisan playacting at the expense of any actual principles or beliefs. But one myth that Broder articulated is genuinely noteworthy and pernicious:


And third, by contrasting today's vote on a nonbinding resolution with the pending vote on funding the war in Iraq, [Bush] shifted the battleground to a fight he is likely to win -- and put the Democrats on the defensive. Much of their own core constituency wants them to go beyond nonbinding resolutions and use the power of the purse to force Bush to reduce the American commitment in Iraq.

But congressional Democrats are leery of seeming to withhold resources from the 150,000 troops who will be fighting in that country once the surge is complete; that is why they blocked Republicans from offering resolutions of their own in the House or Senate pledging to keep financing the war. Democrats did not want an up-or-down vote on that question, but Bush has placed it squarely before them.

As usual, Broder and his fellow Beltway pundits attribute anti-war sentiment and a desire for meaningful anti-war action to the so-called "core constituency" of the Democratic Party (which is pundit-speak for the dirty, radical, socialist masses that drag Democrats "to the Left"), even though a majority of Americans -- not just the screaming vulgar bloggers -- favor binding action (which includes many measures other than immediate de-funding) on the part of the Congress to end the war.

But worse still is Broder's characterization of de-funding measures -- such as those introduced by Russ Feingold -- as ones which "seem[] to withhold resources from the 150,000 troops who will be fighting in that country." In fact, de-funding measures absolutely do no such thing; it is a complete distortion -- pure false caricature -- to equate war de-funding with endangerment of the troops. As I wrote the other day:


What does seem clear is that one of the principal factors accounting for the reluctance of Democrats to advocate de-funding is that the standard corruption that infects our political discourse has rendered the de-funding option truly radioactive. Republicans and the media have propagated -- and Democrats have frequently affirmed -- the proposition that to de-fund a war is to endanger the "troops in the field."

This unbelievably irrational, even stupid, concept has arisen and has now taken root -- that to cut off funds for the war means that, one day, our troops are going to be in the middle of a vicious fire-fight and suddenly they will run out of bullets -- or run out of gas or armor -- because Nancy Pelosi refused to pay for the things they need to protect themselves, and so they are going to find themselves in the middle of the Iraq war with no supplies and no money to pay for what they need. That is just one of those grossly distorting, idiotic myths the media allows to become immovably lodged in our political discourse and which infects our political analysis and prevents any sort of rational examination of our options.

That is why virtually all political figures run away as fast and desperately as possible from the idea of de-funding a war -- it's as though they have to strongly repudiate de-funding options because de-funding has become tantamount to "endangering our troops" (notwithstanding the fact that Congress has de-funded wars in the past and it is obviously done in coordination with the military and over a scheduled time frame so as to avoid "endangering the troops").

In his column, Broder shows how that distortion is perpetuated. He himself does not come out and say that de-funding the war will endanger the troops, but instead places himself above it all by using the passive voice: "congressional Democrats are leery of seeming to withhold resources from the 150,000 troops who will be fighting in that country once the surge is complete." "Seeming" in whose eyes? Why would pro-de-funding Democrats appear to be "withholding resources" from the troops even though that is completely false? It is because pundits like Broder continue to echo this manipulative line and thereby implant it in our public discourse.

Broder speaks of the appearance that de-funding endangers the troops as though he is simply describing a phenomenon that he has nothing to do with. In fact, it is Broder himself who is creating and then validating that simplistic and deceitful notion by repeating it in his column and even using it to praise the President for exploiting it.

That is what Broder means when he praises the President for "contrasting today's vote on a nonbinding resolution with the pending vote on funding the war in Iraq" and thereby "shifted the battleground to a fight he is likely to win -- and put the Democrats on the defensive." Broder is congratulating the President for exploiting the belief that those who use de-funding measures to end the war are endangering the troops.

It is the right-wing demonizers who concoct these debate-killing slogans, but it is the David Broders who embrace and perpetuate them, who convert completely irrational premises into unquestioned and unchallengable political orthodoxies, thereby rendering our political debates toxic and worthless. And that is, more or less, the core job description of Beltway pundits.

Broder and similar Beltway pundits love to tout their own "seriousness" and accuse the swarming masses of debating critical national security matters irresponsibly and inaccurately. But there is nothing more irresponsible than echoing patently false caricatures of policy options in war. There may be good arguments against de-funding. But the notion that it will leave the troops vulnerable "in the field" is simply not one of them.

That is just a playground myth that was invented to discredit de-funding proposals without having to bother to engage them on the merits. The fact that Broder simply echoes that myth and thereby degrades our political debate over Iraq illustrates quite clearly just how unserious and harmful our elite pundit class is.