This extraordinary and deeply moving Oscar-nominated movie illuminates a forgotten patch of history. 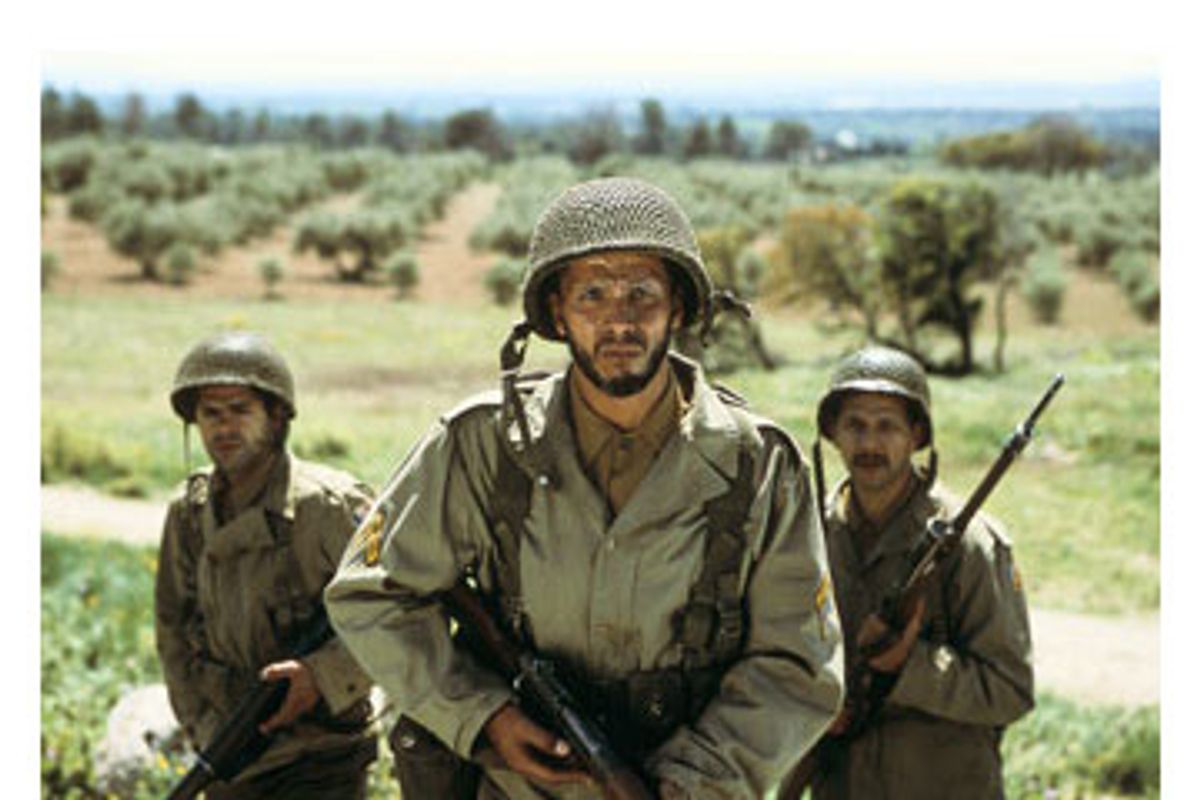 The French title -- the better, more descriptive title -- for Rachid Bouchareb's extraordinary and deeply moving "Days of Glory" is "Indigènes," which means natives. "Days of Glory," an Oscar nominee for best foreign language film, set in the last years of World War II, follows a group of North African soldiers, largely Muslims, who have enlisted to free France -- a country they consider their motherland, even though they've never set foot in it -- from the Nazis. They're fervently devoted to the cause, even though they get far less respect and recognition than their French counterparts do. They receive inequitable rations; they're only infrequently promoted; and as outsiders, their contributions are forgotten even as they're giving their all. It only follows that history should forget them too.

I've never seen a picture quite like "Days of Glory," which not only illuminates a forgotten patch of history, but also broadens and enriches the idea of what it means to be both a patriot, in the best sense of the word, and a citizen of the world. French President Jacques Chirac, after seeing the picture last fall, was so moved by it that he took action to make sure that veterans who had once been disparagingly referred to as indigènes -- veterans from France's former colonies, who were receiving minuscule pensions in comparison with their French counterparts -- would begin receiving back payments of those pensions. It's remarkable that "Days of Glory" has affected policy. But even if it hadn't, its dramatic power has enough value by itself. This is a supreme example of how a filmmaker can make a work of fiction based on fact that, without didacticism or heavy-handed moralizing, leaves us feeling more connected not just with history but with what makes us human in the first place.

To tell this story, Bouchareb and screenwriter Olivier Lorelle use four central characters (fictional characters, but ones based on interviews and research done by the filmmakers). Abdelkader (Sami Bouajila) is a corporal who hopes to be promoted to sergeant, but not simply out of blind ambition: He's anxious to prove his worth, to his country as well as to himself, and also to be recognized for his contributions. Messaoud (Roschdy Zem) is a private and an ace marksman, who, when his unit arrives in Provence, is amazed by the warm welcome the locals extend to the soldiers, particularly by the attentions of a beautiful Frenchwoman, Irène (Aurélie Eltvedt). Yassir (Samy Nacery) is a Berber peasant who enlists chiefly for the money -- he needs it, in part, to marry off his younger brother, Larbi (Assaad Bouab), who also enlists. But even he becomes a dedicated fighter. And Saïd (Jamel Debbouze, whom American audiences may have seen in "She Hate Me" and "Amélie"), a Moroccan peasant who leaves his mother to fight, as his own father did in World War I, because he feels it's his duty.

The narrative here unfolds as a series of vignettes, a network of small scenes (and some big ones) that give us a sense of these soldiers' experiences, not just in battle but in how they relate to their commanding officers (particularly the stern, sharp-featured Sgt. Martinez, played by Bernard Blancan), to the people they encounter as they trek through Provence and the Rhône Valley, and to one another. Bouchareb stages the battle sequences with clear-eyed confidence and conviction; they're not particularly graphic, but they hold you.

But like all good filmmakers, Bouchareb knows that the greatest power lies in the details, in the small gestures rather than the grand ones. Sometimes his methods are so understated that we're not entirely sure what certain scenes mean until afterward, when we've had a chance to think about them. He shows us the African soldiers, exhausted but exhilarated after vanquishing a German battalion in the mountains; a car carrying a group of French officers, applauding the victory as if they'd been the ones to earn it, breezes by. To them, the soldiers who actually fought so valiantly are invisible.

Yassir and Larbi have been making money by removing watches and medals from dead Germans and selling their finds. At one point they enter a French church, to them an odd and mustily exotic place, and Larbi promptly begins emptying a collection box. Yassir stops him, scolding him for taking money from the house of God, even if it's someone else's God. And as the men travel through cold, snowy mountains, we see Yassir stop to warm the feet of his brother: All they have to wear are their sandals, which would be fine at home but are useless in this cruel climate.

Bouchareb trusts his actors to carry the weight of the movie, and they don't fail him. (The cast, collectively, took the prize for best actor at last year's Cannes Film Festival.) Bouajila, as Abdelkader, gives us a strong sense of a man whose sense of duty is matched by his intolerance for injustice, although his crude attempts to fight for it often get him in trouble: He brings a great deal of rough vitality to a scene in which he fights for (and wins) the right of all soldiers to have tomatoes with their dinner -- previously, these treats had been reserved only for native Frenchmen.

Zem's Messaoud, the marksman, has a wonderful scene in which he waits for the Frenchwoman he's just met, Irène, in her bedroom. He lifts a pillow from her bed and holds it to his face, taking the measure of its scent and its softness -- itb

The young Saïd is the movie's most heartbreaking character, a kid so green he coughs and sputters when he's offered a post-victory glass of whiskey by Martinez (who, after initially disciplining Saïd somewhat cruelly, has taken a liking to him). Debbouze has an unusual, unforgettable face: With his heavy brow and alert, questioning eyes, he's a mix of scrappiness and innocence -- part pugilist, part putto. When Saïd and his comrades finally arrive in France, he pulls a leaf off a tree and tastes it. He scoops up some soil and breathes in its scent, remarking on how different it is from the earth at home. He and his comrades have been looking forward to this day since they shipped out from Morocco. (Somewhat confusingly, they keep asking their superiors when they're going "home"; what they're really asking is, "When will we finally reach France?")

Saïd can't read. When a German plane drops a flutter of propaganda -- sheets of paper with a message, written in Arabic, promising that if the African soldiers will only cross over to Germany, they'll be warmly welcomed as equals -- Saïd nestles close to Abdelkader to find out what the words say. Abdelkader explains to him and then crumples the page, throwing it to the ground in disgust. Saïd picks up the flier and stuffs it into a hole in his boot: It's good enough only for that. As he proudly tells one of the villagers who welcome his unit in Provence -- a pretty young girl who's clearly interested in him, although it doesn't even occur to him to pursue anything -- "I free a country, it's my country. Even if I've never seen it before." What does it mean to belong to a country, even when you're made to feel you don't belong in it? That's the potent question "Days of Glory" asks, although it's humble enough to know it can't provide an answer. The best conclusion we can draw is that the search for a sense of belonging can fill up a lifetime, and beyond.