It could happen here

In an excerpt from his new book, Salon's columnist explains why, for the first time since the resignation of Richard M. Nixon, Americans have reason to doubt the future of their democracy. 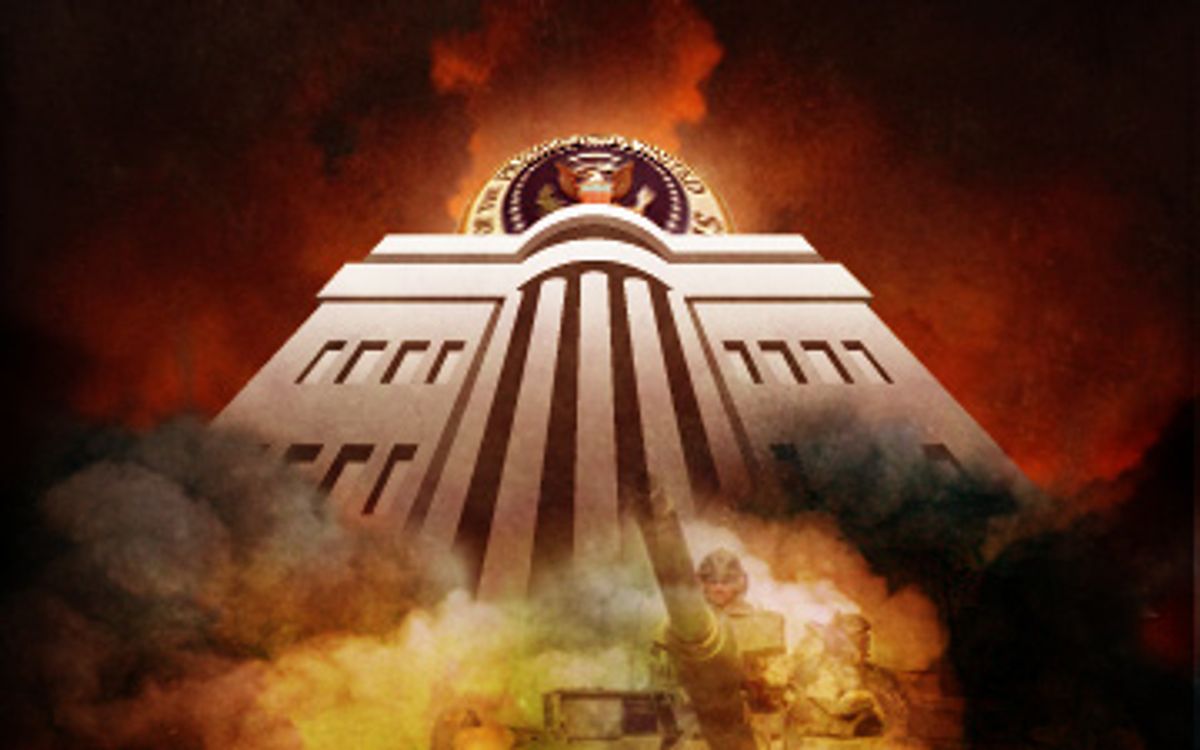 Can it happen here? Is it happening here already? That depends, as a recent president might have said, on what the meaning of "it" is.

To Sinclair Lewis, who sardonically titled his 1935 dystopian novel "It Can't Happen Here," "it" plainly meant an American version of the totalitarian dictatorships that had seized power in Germany and Italy. Married at the time to the pioneering reporter Dorothy Thompson, who had been expelled from Berlin by the Nazis a year earlier and quickly became one of America's most outspoken critics of fascism, Lewis was acutely aware of the domestic and foreign threats to American freedom. So often did he and Thompson discuss the crisis in Europe and the implications of Europe's fate for the Depression-wracked United States that, according to his biographer, Mark Schorer, Lewis referred to the entire topic somewhat contemptuously as "it."

If "it" denotes the police state American-style as imagined and satirized by Lewis, complete with concentration camps, martial law, and mass executions of strikers and other dissidents, then "it" hasn't happened here and isn't likely to happen anytime soon.

For contemporary Americans, however, "it" could signify our own more gradual and insidious turn toward authoritarian rule. That is why Lewis's darkly funny but grim fable of an authoritarian coup achieved through a democratic election still resonates today -- along with all the eerie parallels between what he imagined then and what we live with now.

For the first time since the resignation of Richard M. Nixon more than three decades ago, Americans have had reason to doubt the future of democracy and the rule of law in our own country. Today we live in a state of tension between the enjoyment of traditional freedoms, including the protections afforded to speech and person by the Bill of Rights, and the disturbing realization that those freedoms have been undermined and may be abrogated at any moment.

Such foreboding, which would have been dismissed as paranoia not so long ago, has been intensified by the unfolding crisis of political legitimacy in the capital. George W. Bush has repeatedly asserted and exercised authority that he does not possess under the Constitution he swore to uphold. He has announced that he intends to continue exercising power according to his claim of a mandate that erases the separation and balancing of power among the branches of government, frees him from any real obligation to obey laws passed by Congress, and permits him to ignore any provisions of the Bill of Rights that may prove inconvenient.

Whether his fellow Americans understand exactly what Bush is doing or not, his six years in office have created intense public anxiety. Much of that anxiety can be attributed to fear of terrorism, which Bush has exacerbated to suit his own purposes -- as well as to increasing concern that the world is threatened by global warming, pandemic diseases, economic insecurity, nuclear proliferation, and other perils with which this presidency cannot begin to cope.

As the midterm election showed, more and more Americans realize that something has gone far wrong at the highest levels of government and politics -- that Washington's one-party regime had created a daily spectacle of stunning incompetence and dishonesty. Pollsters have found large majorities of voters worrying that the country is on the wrong track. At this writing, two of every three voters give that answer, and they are not just anxious but furious. Almost half are willing to endorse the censure of the president.

Suspicion and alienation extend beyond the usual disgruntled Democrats to independents and even a significant minority of Republicans. A surprisingly large segment of the electorate is willing to contemplate the possibility of impeaching the president, unappetizing though that prospect should be to anyone who can recall the destructive impeachment of Bush's predecessor.

The reasons for popular disenchantment with the Republican regime are well known -- from the misbegotten, horrifically mismanaged war in Iraq to the heartless mishandling of the Hurricane Katrina disaster. In both instances, growing anger over the damage done to the national interest and the loss of life and treasure has been exacerbated by evidence of bad faith -- by lies, cronyism, and corruption.

Everyone knows -- although not everyone necessarily wishes to acknowledge -- that the Bush administration misled the American people about the true purposes and likely costs of invading Iraq. It invented a mortal threat to the nation in order to justify illegal aggression. It has repeatedly sought, from the beginning, to exploit the state of war for partisan advantage and presidential image management. It has wasted billions of dollars, and probably tens of billions, on Pentagon contractors with patronage connections to the Republican Party.

Everyone knows, too, that the administration dissembled about the events leading up to the destruction of New Orleans. Its negligence and obliviousness in the wake of the storm were shocking, as was its attempt to conceal its errors. It has yet to explain why a person with few discernible qualifications, other than his status as a crony and business associate of his predecessor, was directing the Federal Emergency Management Agency. By elevating ethically dubious, inexperienced, and ineffectual management the administration compromised a critical agency that had functioned brilliantly during the Clinton administration.

To date, however, we do not know the full dimensions of the scandals behind Iraq and Katrina, because the Republican leaders of the Senate and the House of Representatives abdicated the traditional congressional duties of oversight and investigation. It is due to their dereliction that neither the president nor any of his associates have seemed even mildly chastened in the wake of catastrophe. With a single party monopolizing power yet evading responsibility, there was nobody with the constitutional power to hold the White House accountable.

Bolstered by political impunity, especially in a time of war, perhaps any group of politicians would be tempted to abuse power. But this party and these politicians, unchecked by normal democratic constraints, proved to be particularly dangerous. The name for what is wrong with them -- the threat embedded within the Bush administration, the Republican congressional leadership, and the current leaders of the Republican Party -- is authoritarianism.

The most obvious symptoms can be observed in the regime's style, which features an almost casual contempt for democratic and lawful norms; an expanding appetite for executive control at the expense of constitutional balances; a reckless impulse to corrupt national institutions with partisan ideology; and an ugly tendency to smear dissent as disloyalty. The most troubling effects are matters of substance, including the suspension of traditional legal rights for certain citizens; the imposition of secrecy and the inhibition of the free flow of information; the extension of domestic spying without legal sanction or warrant; the promotion of torture and other barbaric practices, in defiance of American and international law; and the collusion of government and party with corporate interests and religious fundamentalists.

What worries many Americans even more is that the authoritarians can excuse their excesses as the necessary response to an enemy that every American knows to be real. For the past five years, the Republican leadership has argued that the attacks of September 11, 2001 -- and the continuing threat from jihadist groups such as al Qaeda -- demand permanent changes in American government, society, and foreign policy. Are those changes essential to preserve our survival -- or merely useful for unscrupulous politicians who still hope to achieve permanent domination by their own narrowly ideological party? Not only liberals and leftists, but centrists, libertarians, and conservatives, of every party and no party, have come to distrust the answers given by those in power.

The most salient dissent to be heard in recent years, and especially since Bush's reelection in 2004, has been voiced not by the liberals and moderates who never trusted the Republican leadership, but by conservatives who once did.

Former Republican congressman Bob Barr of Georgia, who served as one of the managers of the impeachment of Bill Clinton in the House of Representatives, has joined the American Civil Liberties Union he once detested. In the measures taken by the Bush administration and approved by his former colleagues, Barr sees the potential for "a totalitarian type regime." Paul Craig Roberts, a longtime contributor to the Wall Street Journal and a former Treasury official under Reagan, perceives the "main components of a police state" in the Bush administration's declaration of plenary powers to deny fundamental rights to suspected terrorists. Bruce Fein, who served as associate attorney general in the Reagan Justice Department, believes that the Bush White House is "a clear and present danger to the rule of law," and that the president "cannot be trusted to conduct the war against global terrorism with a decent respect for civil liberties and checks against executive abuses." Syndicated columnist George Will accuses the administration of pursuing a "monarchical doctrine" in its assertion of extraordinary war powers.

In the 2006 midterm election, disenchanted conservatives joined with liberals and centrists to deliver a stinging rebuke to the regime by overturning Republican domination in both houses of Congress. For the first time since 1994, Democrats control the Senate and the House of Representatives. But the Democratic majority in the upper chamber is as narrow as possible, depending on the whims of Joseph Lieberman of Connecticut, a Republican-leaning Democrat elected on an independent ballot line, who has supported the White House on the occupation of Iraq, abuse of prisoners of war, domestic spying, the suspension of habeas corpus, military tribunals, far-right judicial nominations, and other critical constitutional issues. Nor is Lieberman alone among the Senate Democrats in his supine acquiescence to the abuses of the White House.

Even if the Democrats had won a stronger majority in the Senate, it would be naive to expect that a single election victory could mend the damage inflicted on America's constitutional fabric during the past six years. While the Bush administration has enjoyed an extraordinary immunity from Congressional oversight until now, the deepest implication of its actions and statements, as explored in the pages that follow, is that neither legislators nor courts can thwart the will of the unitary executive. When Congress challenges that presidential claim, as inevitably it will, then what seems almost certain to follow is not "bipartisanship" but confrontation. The election of 2006 was not an end but another beginning.

The question that we face in the era of terror alerts, religious fundamentalism, and endless warfare is whether we are still the brave nation preserved and rebuilt by the generation of Sinclair Lewis -- or whether our courage, and our luck, have finally run out. America is not yet on the verge of fascism, but democracy is again in danger. The striking resemblance between Buzz Windrip [the demagogic villain of Lewis's novel] and George W. Bush and the similarity of the political forces behind them is more than a literary curiosity. It is a warning on yellowed pages from those to whom we owe everything.

From "It Can Happen Here" by Joe Conason. Copyright (c) 2007 by the author and reprinted by permission of Thomas Dunne Books, an imprint of St. Martin's Press.