"We listened as his soul cracked"

In HBO's "Ghosts of Abu Ghraib" the "bad apples" express remorse, but claim that they were scapegoats. 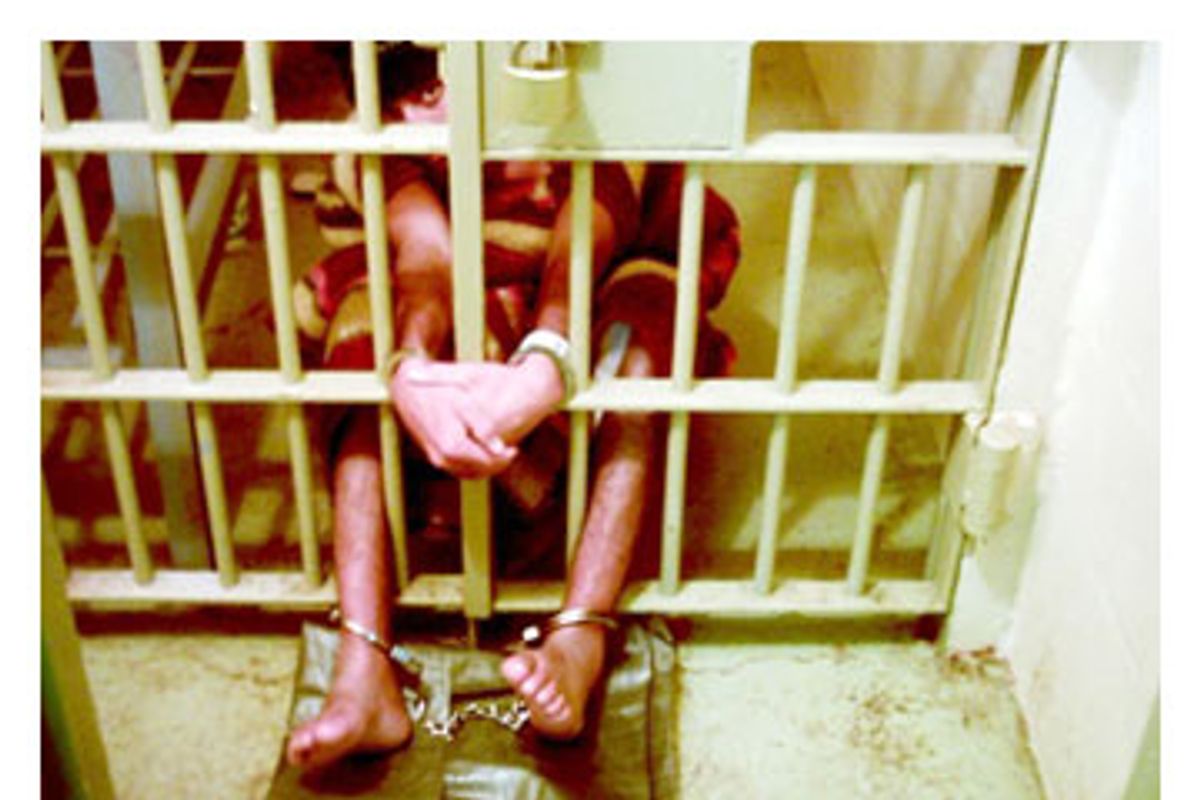 The photos from Abu Ghraib hardened the world's hearts against America. The casual sadism of those pictures, the men and women smiling, pointing, giving the thumbs up while naked prisoners cringed beside them, seemed to tell the global community all it needed to know about what was happening behind closed doors in Iraq. The administration's official tale was that the abuse depicted in those pictures was the result of nine "bad apples" on the night shift, unstable soldiers who perpetuated an "Animal House" atmosphere that was in no way endorsed by their superior officers.

But with fresh reports of abuse by U.S. soldiers from Iraqi detainees in last Sunday's New York Times, the story of Abu Ghraib may be more open to debate than ever. Rory Kennedy, a documentary filmmaker and the daughter of Robert Kennedy, set out to demonstrate how the atrocities at Abu Ghraib were a direct result of unprecedented changes in U.S. policy regarding what constitutes torture and how prisoners are allowed to be treated. In HBO's "Ghosts of Abu Ghraib" (airs at 9:30 p.m. on Thursday, Feb. 22), which first premiered at Sundance in January, Kennedy pieces together a narrative that is very different from either the common wisdom about Abu Ghraib or the Pentagon's official story.

While we now know that the humiliation tactics employed in Abu Ghraib were first used in Guantánamo Bay, Cuba, Kennedy traces a shift in U.S. policy regarding abuse to the days after 9/11. The Justice Department sent a memo defining torture in more extreme terms than it ever had before, describing it as "equivalent in intensity to the pain accompanying serious physical injury, such as organ failure, impairment of bodily function, or even death."

In Kennedy's film, Mark Danner, author of the book "Torture and Truth," explains how this memo and others set the stage for Abu Ghraib. "The heart of this argument," says Danner, "is to redefine torture so it is so narrowly conceived, it essentially allows very, very severe interrogation that cannot be construed to be torture."

"I can remember sitting in my office, reading some of these memos ... It literally took my breath away," Rear Adm. John Hutson, who served as judge advocate general for the U.S Navy from 1997 until 2000, tells Kennedy's camera. "I couldn't believe I was reading this, and that it hadn't been shredded and burned and buried as the lively imaginations of some lowly lawyer in the bowels of justice. It should never have seen the light of day -- but now, suddenly, it's become U.S. policy."

Meanwhile, Donald Rumsfeld was aggressive in pushing Military Intelligence in Abu Ghraib to get the kind of results they were getting in Guantánamo. But according to then-Brig. Gen. Janis Karpinski, who was in charge of three Iraqi prisons including Abu Ghraib and who was demoted in the wake of the scandal, the prisons were perpetually understaffed. "We requested resources and assistance many times, almost on a daily basis, at some points practically pleading for resources," she tells Kennedy.

On top of that, those unlucky soldiers assigned to Abu Ghraib often received little or no training. "We get there, and we're told, OK, put your weapons away. You're going to be prison guards," says Javal Davis, an M.P. who served six months in a military prison for his role at Abu Ghraib. "So, hence, we put our weapons away, our tons of ammunition away, and we became prison guards, with no training whatsoever."

But the novice guards weren't the only ones who didn't know what they were doing at Abu Ghraib. According to first-person accounts in the film, many of the prisoners there were being held without any explanation. "I don't know why I was imprisoned," says one unidentified detainee who was in Abu Ghraib in 2003. "They took me and kept me for seven months with my children and I don't know why I was imprisoned. I asked, what are you accusing me of? They said that I was making explosives, and explosive charges. And that's all. I don't know more than that. What proof do you have against me? Nothing! Just some denunciation from some neighbor."

In a particularly haunting segment of Kennedy's film, one former prisoner describes how he could hear other men being tortured. "One day they brought sheets to cover the cells in order for no one to see anything. They began torturing one of them and we could hear what was happening. We listened as his soul cracked. The sound of his voice really twisted our minds and made our hearts stop," he says. Later the prisoners learned that the man was Manadel al-Jamadi, whose death at Abu Ghraib was the only one that was ruled a homicide.

Of al-Jamadi, Ken Davis, an M.P. who was stationed at the prison but didn't take part in the abuse, says that the CIA "put him on ice, and they were going to try to get him out on a stretcher with IVs to cover up a murder." Incredulous, Davis asks, "But has anybody been brought to trial for that? No, but [Spc. Charles] Graner and [Spc.] Sabrina [Harman] were charged with those pictures! That to me is ridiculous. We won't charge the murder, even though it's ruled a homicide, but we'll charge you for taking pictures and exposing that a murder happened here."

At one point, Davis claims, he told his lieutenant that Military Intelligence was doing "some pretty weird things to naked detainees." The officer's response? "That's not even your job over there."

Davis, in particular, offers a dire tale of how difficult it was to behave ethically in Iraq. He expresses shock that, when he asked for the Rules of Engagement on the first day of the invasion, no one could tell him. When another soldier instructed him simply to shoot at "the enemy," Davis told the guy that he'd never left the U.S. before, so everyone looked like the enemy to him.

But not all of the soldiers interviewed in "Ghosts of Abu Ghraib" come across as sympathetic, and not all of them appear to be repentant. They say that they were instructed by superiors to point and laugh at the prisoners. Lynndie England, perhaps the most recognizable face in the photos, has since described the wildly dysfunctional romantic relationship she had with Graner, who allegedly had a history of abusive relationships and a bad habit of taking pictures of his young lover in compromised positions. And the two other women, Harman and Spc. Megan Ambuhl, sometimes sound like they're making excuses for their behavior. Oddly enough, Ambuhl went on to marry Graner in 2005, and has recently begun speaking out about the fact that she and Graner and the rest of the M.P.s took the fall for carrying out orders that they were taught not to question.

Like Ambuhl, nearly all of the soldiers seem to see themselves as scapegoats, and Kennedy's film backs up their claims, tracing a line from changes in U.S. policy to requests by Military Intelligence instructing the M.P.s to make sure prisoners had "a bad night" to the horrors of those now-familiar photographs. We're even shown a memo where Rumsfeld not only approves extreme measures for handling prisoners, but also adds a handwritten note, "I stand for 8-10 hours a day. Why is standing limited to four hours?"

Near the end of the film, Roman Kroll, who was sentenced to 10 months in military prison for his role in the scandal, glances at one of the photos and says, "I'm trying to forget this. It brings back bad memories." Given the lack of a thorough investigation of abuses at Abu Ghraib and the damage those photos did to our country's reputation worldwide, the rest of us need to try very hard not to forget what happened there.