If the United States were a company, would George Bush be our CEO?

The first MBA president probably wouldn't keep his job if he had to face a board of directors. But short of impeachment, what can be done to rein him in? 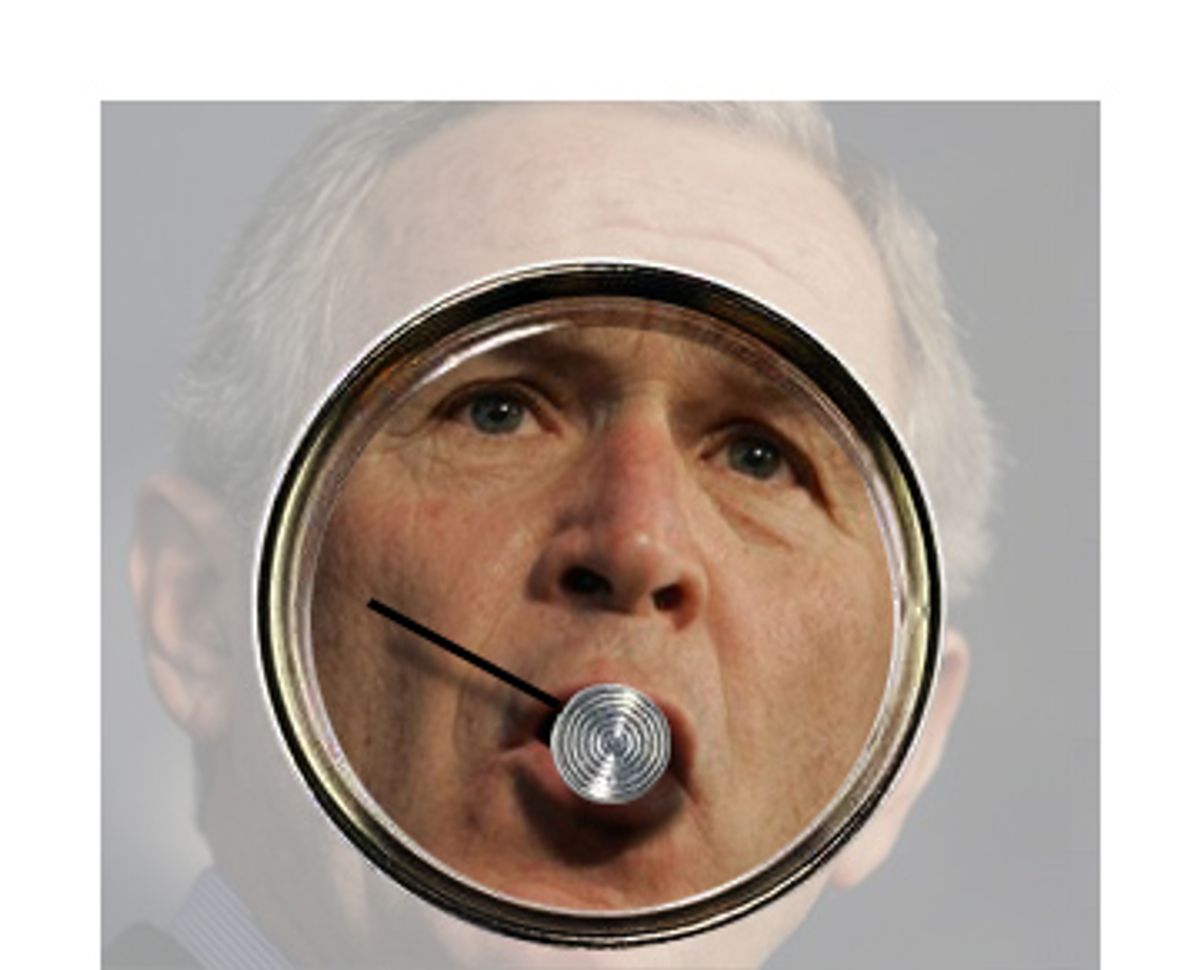 The president of the United States is the chief executive officer of the most powerful economic machine in the world, yet his performance is rarely evaluated from that perspective. In fact, President Bush is the first president to have earned a master's of business administration and run a company; in 2002 Time magazine called him "the CEO president," noting his Harvard MBA and business experience.

But if the United States were a company, it would be a troubled one. A disastrous war in Iraq; another war nearly won, now at risk in Afghanistan; massive budget deficits -- USA Inc. is beset by many crises. As the chairman of a private investment firm, I have assisted many boards of directors in determining whether the CEO of a struggling company should remain in that job. As a citizen and stakeholder in this great country, I found myself thinking: How would a board of directors evaluate President Bush?

My thought exercise has its limits, since the nation doesn't technically have a board of directors -- American voters are best compared to stockholders. But in many ways the next best thing is the Congress, which has a crucial role in vetting, authorizing or blocking most of the president's proposals, from his budget to his Supreme Court picks to his decision to go to war. Now that we have a new congressional majority, it seemed an interesting time to wonder: Would we continue to employ George W. Bush if he were a CEO? If not, is there a way to remove him? And if that's not a viable option, how should Congress act for the 23 months until he leaves office?

When advising a board on how to evaluate a CEO, I tell them to review his or her performance in the following areas: implementing the company's fiscal and monetary policies, developing and successfully executing strategic plans, seeing that well-qualified personnel and managers are appointed, ensuring stability and long-range success, and respecting and protecting the charter and bylaws of the institution. How is President Bush doing on each of those counts?

Fiscal Responsibility
George W. Bush took over as CEO of USA Inc. when the country was running substantial surpluses, rapidly paying off its debt, and moving toward a future with a balanced budget. Forecasts predicted the country would continue to grow and be debt free in the near future. Bush took charge, and the opposite occurred: the country is running record deficits; debt service is skyrocketing. Bush's most recent economic forecast (arguably optimistic) predicts a balanced budget by 2012 (contingent on the wars in Iraq and Afghanistan not costing the United States a dime after 2009), which is, ironically, when he will no longer be in office. The trade deficit with USA Inc.'s No. 1 competitor, China, is increasing. Interestingly, a characteristic of many failing CEOs when losses are mounting is to hide or obfuscate the real deficits. This president, in addition to incurring massive deficits, has managed to hide the magnitude of the losses by special (otherwise known as "off balance sheet") allocations of billions of dollars that do not appear in the annual budget.

Strategic Decisions
The most important strategic decision made by CEO Bush was to minimize the importance of stabilizing Afghanistan, while at the same time choosing to invade Iraq. Those choices turned out to be a perfect example of the adage "fire, aim, ready!" and have led USA Inc. into unmitigated disaster. Not only were those decisions based on faulty intelligence, but Bush also had no business plan for his new endeavor, failing to take into account what the war would cost in lives and treasure, or what it would cost this country in its diplomatic relationships with the rest of the world. He cherry-picked intelligence, like a CEO cooking the books in order to get board support for his agenda. In other words, he was ready to reject any evidence that did not support the decision to invade.

Execution of Strategic Decisions
How well did our CEO execute his decision to invade Iraq? He didn't send enough troops; he didn't equip them well; he had no plan to win the peace; and he didn't do enough research to understand just how deep the division between the various sectarian groups was. This has resulted in a war that our CEO finally admits is not going well at all. Bush has left USA Inc. with no good options as to how to fix the problem. If USA Inc. were a corporation, an effective board would almost certainly not choose to ask the executive who got the company into such dangerous trouble to be the one extricate it; the board would find a new CEO.

Personnel Choices
Excellent chief executives make excellent personnel choices; they are willing to admit mistakes and replace the occasional bad personnel choice with alacrity. This has not been the case with our chief executive. Bush stuck too long with his mistakes, remaining stubbornly supportive of inept individuals from Federal Emergency Management Agency head Michael Brown to former Defense Secretary Donald Rumsfeld, the architect of the invasion and occupation plan for Iraq, who was responsible for not sending enough troops to Iraq to begin with and for many more tragic mistakes along the way. Maybe worse, Bush's bad personnel decisions led other, more able people on his team, like former Treasury Secretary Paul O'Neill and former Secretary of State Colin Powell, to simply give up and leave his administration after years of infighting. Bush has relied on an inner circle of like-minded cronies who have persistently belittled and then eliminated critics. For the most part, he has chosen close advisors based on loyalty and similar ideology rather than competence, experience or expertise.

R&D for the Future of the Enterprise
Because of the strategic error of invading Iraq, our CEO now finds his company can't spend money on conducting basic research or rebuilding its physical infrastructure, plus it is drastically shortchanging its educational system. USA Inc. has become so divided that problems like Medicare and Social Security appear to have no solution. All of this has resulted in polls showing, for the first time in the country's history, that many parents don't believe their children are going to do better than they have done.

Adherence to the Institution's Charter and Bylaws
This CEO has allowed his ideology to subvert the charter and bylaws this country was built on, namely the Constitution. Americans used to believe their personal papers and privacy were protected; now the government can sneak into your home secretly, steal your papers, bug your computer, read your e-mails without ever requiring a warrant or any judicial oversight. Americans used to believe there was separation of church and state; under this administration millions of tax dollars have been diverted to church-related groups; government policies are made based on personal religious beliefs rather than the needs of the people. Stem cell research is a fine example. America is falling behind its competitors: Some of the best stem cell research and other scientific advancements are now happening in Europe and Asia rather than this country.

In addition, one telltale trait of a failing CEO is that he and those who remain loyal try to silence their critics by arguing that criticism only undermines the morale of the people trying to solve the problem -- usually meaning the CEO and his management team -- and potentially emboldens the company's enemies. This sort of complaint has become a hallmark of the Bush administration.

If Bush were the chief executive of a company, he would in all likelihood be given a good pension and quickly replaced. However, this is not the situation with the president. Although Congress does have the power to impeach him for "high crimes and misdemeanors," such a step is enormously time-consuming, requiring many hours of congressional investigations and hearings, and politically divisive. While I personally think it is possible that the president's misdeeds, especially having to do with Iraq, might well rise to the level of wrongdoing that the framers imagined when they provided for impeachment in the Constitution, at this point, leading Democrats like House Speaker Nancy Pelosi have rejected the impeachment option.

But Congress doesn't have to sit by and do nothing, short of impeachment. When a company is going in the wrong direction, the board of directors has the responsibility to do everything possible to change course and move forward with better direction. Congress, the closest thing we have to a board of directors, has the constitutional responsibility to be a coequal branch of the government and be a check on both the executive and the judiciary. For the past six years, Congress has abandoned that role. (If it were a corporate board of directors, there might well be shareholder lawsuits over how it has neglected its oversight responsibilities.) But now, with new majorities in both houses, it is time for Congress to return to its rightful role, which is carefully scrutinizing Bush's plans, proposals and policies. Congress has to be willing to stand up to our CEO and to reject his ideas when they believe they are wrong. Congress has to evaluate his personnel choices from a much more objective standpoint. Congress members have to behave like the elected representatives of the American people that they are.

And finally, we the people, the voters, have to use this valuable set of lessons in choosing our next chief executive. We have to learn to tune out the hyperbole surrounding a campaign and try to objectively evaluate the next president's ability to govern and administer, to discern his or her genuine aptitude to lead the country out of the troubles we find ourselves in after two terms of President Bush. We must remember that we the people are the stockholders; it is our company; it is our country, and those we elect are our employees -- and are responsible to us. We cannot afford another failure as CEO.