Feel the surge of the Victory Caucus

The right-wing's new online pro-war movement is heading towards a rapid death.

The blogging warriors who created the mighty Victory Caucus artificially drove up traffic for their new site by collectively linking to it on an almost daily basis, and they then cited the surging traffic statistics as proof that Americans urgently crave War Victory and they had tapped into some previously unknown yearning on the part of the Silent Majority for Glorious Triumph in Iraq. Here, for instance, was the post written on February 17 by Glenn "Instapundit" Reynolds:

Other war-cheering bloggers similarly cited the alleged booming traffic growth of the Victory Caucus site as proof that they had given birth to a Real Movement. Those claims, in turn, predictably spawned mainstream media stories which recited this storyline and touted the Phenomenon of the Victory Caucus.

But now the novelty has worn off, the traffic-boosting links have died down, and the Victory Caucus is left to stand on its own Churchillian legs. How is our fledgling War Movement doing? Using the metrics touted by the Blogging Warriors, things appear to be surging downwards rather rapidly. At the time Reynolds excitedly touted the traffic boom, the average daily visits for The Victory Caucus was almost 30,000. Today:

Like the contingent of British troops in Iraq, the numbers are decreasing rapidly. The average daily visit number is now down to 12,000 -- less than half of what it was a mere 5 days ago. And that is actually a sunny picture of the health of the Victory Caucus, as that 12,000 number appears to reflect the artificially boosted traffic from early last week. Although the weekly and monthly traffic charts are currently unavailable, the Site Meter for the Victory Caucus demonstrates that the average number of daily visits is actually much lower: 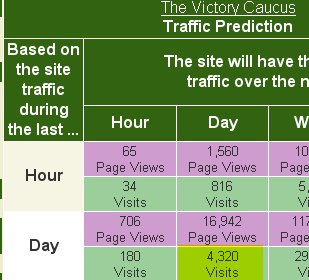 That means that the average number of visits for the Victory Caucus each day -- which, one should recall, is the measurement which the excited Blogging Warriors used to claim that the Victory Caucus would be, as the Politico was tricked into writing, "an advocacy group designed to counter the anti-war MoveOn.org" -- has shrunk, in a mere 5 days, from 28,000, to 12,000, to almost 4,000. If it shrinks any further, it might disappear from the Internet altogether.

The Editor of the Wall St. Journal Editorial Page, Paul Gigot, devoted his entire Fox show this weekend, along with his fellow WSJ ideologues, to claiming that Democrats have a real political problem because they are being forced to satisfy the "strong antiwar faction within that party," but those efforts will alienate real, normal Americans who don't share that radical left-wing agenda. At some point, will war supporters accept the reality that they are in a small and shrinking fringe group? Is there any event or any data at all that can make them come to terms with that reality?

UPDATE: In comments, Casual Observer points to what Dick Cheney called the "positive step" of the British withdrawal from Iraq and, accordingly, takes me to task -- quite persuasively, I concede -- on the ground that I concealed the true meaning of the Victory Caucus' steep traffic decline:


Mr. Greenwald's stilted interpretation in this piece reflects a lack of fairness, and balance. I would suggest that he look again at Mr. Cheney's analysis of upcoming changes in British deployment in the southern Iraq region. Mr. Greenwald notes the British drawdown in his post, but he does not connect the dots. No doubt this is because Mr. Greenwald is not a professional journalist, but merely a blogger. The rapid decline in visits and page views at pro-war sites is good news, and in fact proves the opposite of Greenwald's thesis--victory of the 'victory caucus' message . It is clear that the message there is so potent, so powerful, that victory was achieved with a miraculously small number of actual visitors.

But any such objection to C.O.'s point is narrow-minded, because anyone who has followed Iraq even casually knows that this is how things work with this war -- for instance, any increase in violent attacks is always a good sign (because it shows the Terrorists are desperate and know that they are in trouble), and any decrease in violent attacks is also always a good sign (because it shows how we are Beating the Terrorists). That is the same dynamic which explains how a British withdrawal of troops from Iraq -- at exactly the time when the whole "surge" plan is predicated on the need for more troops -- is, as the Vice President said, a "positive step."

The only logical constant in Iraq is that Things are Always Going Well for Us and We are Winning. Everything else -- even events that seem to be exact opposites in the narrow eyes of those who are tragically imprisoned by the suffocating constraints of logic -- invariably constitutes evidence which proves that things are Great.

UPDATE II: The Site Meter chart showing the weekly traffic trend for The Victory Caucus is now available, beginning the day before Reynolds and others hyped its great success, leading to those news articles: 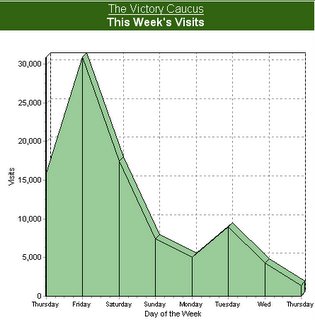 That appears to speak for itself. I think MoveOn.org is safe for now. Maybe The Politico should do a follow-up.