The celeb we love to hate is self-destructing before us all. Maybe it's time to realize that Britney Spears is actually a human being for whom things aren't going very well. 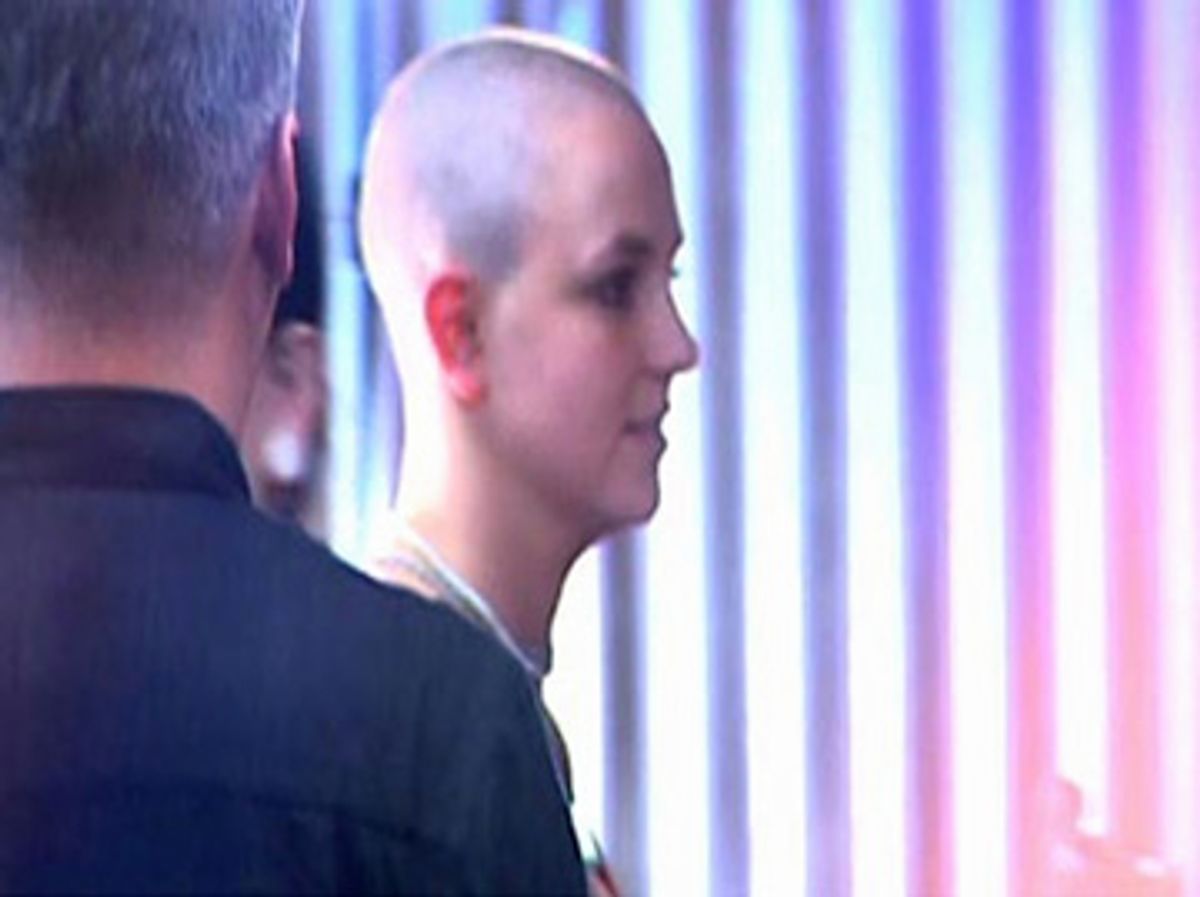 A question: At what point will people notice that the Britney Spears story has become rapidly less funny?

While tabloid press stalwarts -- I'm looking at you, Andrea Peyser -- have been reluctant to curtail the guffawing and censorious finger-wagging that began when the singer spent the holidays flashing her cooter and kicking off a three-month bender, the ribaldry surrounding her unraveling is beginning to feel extremely tacky. In fact, this week's Spears news was so grim that you could practically hear the national laugh track fading to a few awkward giggles.

Rosie O'Donnell has renewed her offer to adopt Spears (in free verse, naturally); Gwen Stefani has expressed her desire to "scoop her up and give her a kiss"; late-night comics are pulling their Britney punches. It seems to be dawning on at least some people that the 25-year-old mother of two is actually a human being for whom things are going very badly.

Spears has taken a semester-long descent into addled behavior: A typical night might include a lie to her young sons' minders about how she's just popping out to the drugstore, a trip to some clubs where she gets so looped that she decides she must change into the ill-fitting bikinis worn by the waitresses, a substance binge that lasts until she vomits on herself, and, in a boot-and-rally move worthy of the Delta Tau Delta brotherhood, some 5 a.m. phone calls about what venues might still be open for her continued partying pleasure. All of this has been conveniently captured on celluloid for the perusal of the public.

Last weekend, things took a darker turn when she checked herself into rehab in Antigua only to beat a hasty retreat the next day, heading to a salon where she shaved her own head in full view of cameras and then melted into bald and tearful fretting about how her mom would be so mad. Spears then got a pair of lips tattooed on her arm and a black-and-pink crucifix on her hip; some outlets reported a middle-of-the-night visit to Cedars Sinai Medical Center, but whatever may or may not have happened there, she was awake the next morning by 10, when she reportedly appeared alone at the pool at the Mondrian Hotel to sunbathe, drink mojitos and ask fellow guests to trade bathing suits with her.

Among the most pitiful of the recent Britney stories has been the Daily Mail scoop that Spears, whose funds have reportedly been cut off by her family, attempted to rent a room at the Mondrian armed only with a scrap of paper with half a credit card number scrawled on it. When denied, she reportedly bayed, "Nobody wants me anymore." On Tuesday, Spears checked herself into rehab at Promises in Malibu, only to check out again the next morning, making a beeline for another tattoo parlor, which was (thank god for small mercies) closed. But by Thursday, Spears had decided to give rehab the old college try once more, reportedly averting an emergency custody hearing with her ex by checking into a program that is supposed to keep her for 30 to 45 days.

There's no denying that these recent chapters of Spears' tale have been riveting in their own way. Her story is so rich that it might serve as a text on which to base a master's thesis about the projections of sexuality on a female body. (Lips on her arm? Bubble-gum cross on her hip? A shorn head and sweats on a girl who used to writhe onstage clad only in a nude body stocking and an albino snake? Paging Judy Butler!) The saga is also a little noir, a little Marilyn Monroe-Hollywood-Babylon; just last week Us Weekly predicted that an elderly Spears would most resemble the drug-puffed Liza Minnelli, our second-generation symbol of what America's celebrity factory does to its famous young girls.

Of course, we're still in the throes of last week's Babylon narrative, one that ended with a dead body being rolled out of a hotel room under a sheet; that particular body is rapidly decaying as Spears' story unfolds. Perhaps it is Anna Nicole Smith's recent demise that is casting an unflattering pall on Spears' otherwise compelling tale -- though wasn't Princess Diana's death supposed to remind us that it's all fun and games until someone loses a life?

Maybe it's simply that in a celebrity universe in which their problems -- controversial adoptions of African babies, multimillion-dollar divorces, affairs with backup dancers -- seem deeply unreal to those of us back on planet Earth, the Spears saga reeks of familiar all-too-human ick. Shaving her head and then blubbering that her mom will be mad? Getting so crocked that she vomits over her nice jeans? Sad attempts to trade clothes with other women? Mutilation of a body that once made her famous and that is now called puffy and pudgy? Trying to figure out who she is and what she wants and who she loves, all while being threatened by the sharpest of American aspersions -- that she is a bad mom?

Some people have speculated that all this was cooked up by a team of publicists eager to gin up interest in Spears before the release of her new album. But any American woman who has ever been a teenager knows that this stuff is not pre-cooked; you just can't fake the kind of bilious unhappiness that drips from Spears in almost every photo taken of her in the past six months. Neither can you fake the hot-burning classism implicit in Spears' Faulknerian rise and fall: She was a little girl plucked out of Louisiana, dressed in school uniforms and told to swing her hips and pout; she was a success as the virgin-whore poster child of the '90s, but when she came of age and we were done with her, she was unceremoniously tossed back to the trailer park.

Other critics, like Chuck Klosterman, have wondered why we give a damn, and speculated fairly that we cannot know the motives of a young woman whom we have never met. But Klosterman himself guesses at Spears' psychology, condescendingly proposing that she is "merely weird ... And really, really, really bored" by a life he cannot imagine is interesting. In doing this, he goes a long way toward answering the question of why we are so consumed by Spears' story.

It's because it's a great yarn that sparks our imagination. We greedily consume the daily, sometimes hourly, snippets of Spears' tale with precisely the glee we reserve for any salacious narrative. We've always done it, whether it's been about Little Dorrit or "General Hospital's" Luke and Laura. Instead of waiting for next month's installment or tomorrow's episode, we gobble this serialized tale in weekly and daily glossy chapters, but still treat it as a bildungsroman melodrama that titillates and satisfies us most when it takes tragic twists and precipitous turns.

We analyze the scraps of reportage that -- even if they seem shakily fact-based at best -- are most thrilling in their illicit vulnerability. We guess at what will happen next, and wonder and tsk at the motivations of the players, in part because we hope to be the one at the water cooler to correctly guess the outcome, and in part because the draw of an unfolding and dramatic story propels us forward in our fictions and in our lives.

Is she bored? Is she crazy? Is she addicted to drugs? Did she shave her head to piss off her mother? To prevent Federline from drug-testing her locks? Are reports that she has been cut off true? How can a grown woman get cut off from money she earned herself, anyway? Has Justin Timberlake made a move to help her? Is she suicidal? Was this all her mother's fault to begin with? Is Harry a Horcrux?

It's all part of the same game.

But the pesky, buzz-killing truth is that this is not a game, it's not a fiction, and it's not our own lives. It's easy to forget, when this stuff is so arresting, that Britney is not Amy Dorrit, or Luke or Laura, or Luna Lovegood. She's an actual person, a technical adult who is behaving like anything but. We watch her and see a grabby baby, a sad girl whose growth was stunted early by the prying eyes and open wallets of the same public that is now rapt by her decay; we see a classic angry teen who is mutilating herself and her body as a way to express anger. We may recognize these figures from fiction, but they exist there precisely because they occur in nature as well. We need to remember that whatever is happening to Spears right now is happening not for our amusement, but to her detriment.

Late night talk show host Craig Ferguson talked sense in his monologue on Monday night, telling his audience that he'd been reconsidering his practice of mocking fuck-up celebrities. "I want to be funny but I want to be able to sleep," Ferguson said of his quandary, comparing the joy we get at watching celebrity lives circle the drain with watching "America's Funniest Home Videos." Audiences chuckle at the tapes of children falling down stairs, only dimly recognizing that an adult was observing the mishap through a lens rather than making a move to aid the child. "Put down the damn camera and help your kid!" exclaimed Ferguson. "People are falling apart! People are dying! That Anna Nicole Smith woman, she died! It stops being funny."

In that monologue, Ferguson announced that despite her weekend of headline-grabbing hair shaving, he would tell "no Britney Spears jokes." He then recounted his own alcoholic-suicidal tailspin 15 years earlier. "I'm not saying Britney Spears is an alcoholic ... but she clearly needs help," said Ferguson. "She's got two kids; she's 25 years old; she's a baby herself. She's a baby. And the thing is, you can embarrass somebody to death." And he reminded viewers -- perhaps imagining Spears herself in his audience -- that anyone who needs help should talk to people who have shared their experiences, pointing out that they could find those people "very near the front of the telephone book. Good luck."