What Hillary Clinton should have known

The presidential candidate claims that if she knew then what she knows now, she wouldn't have voted for war. But others knew. 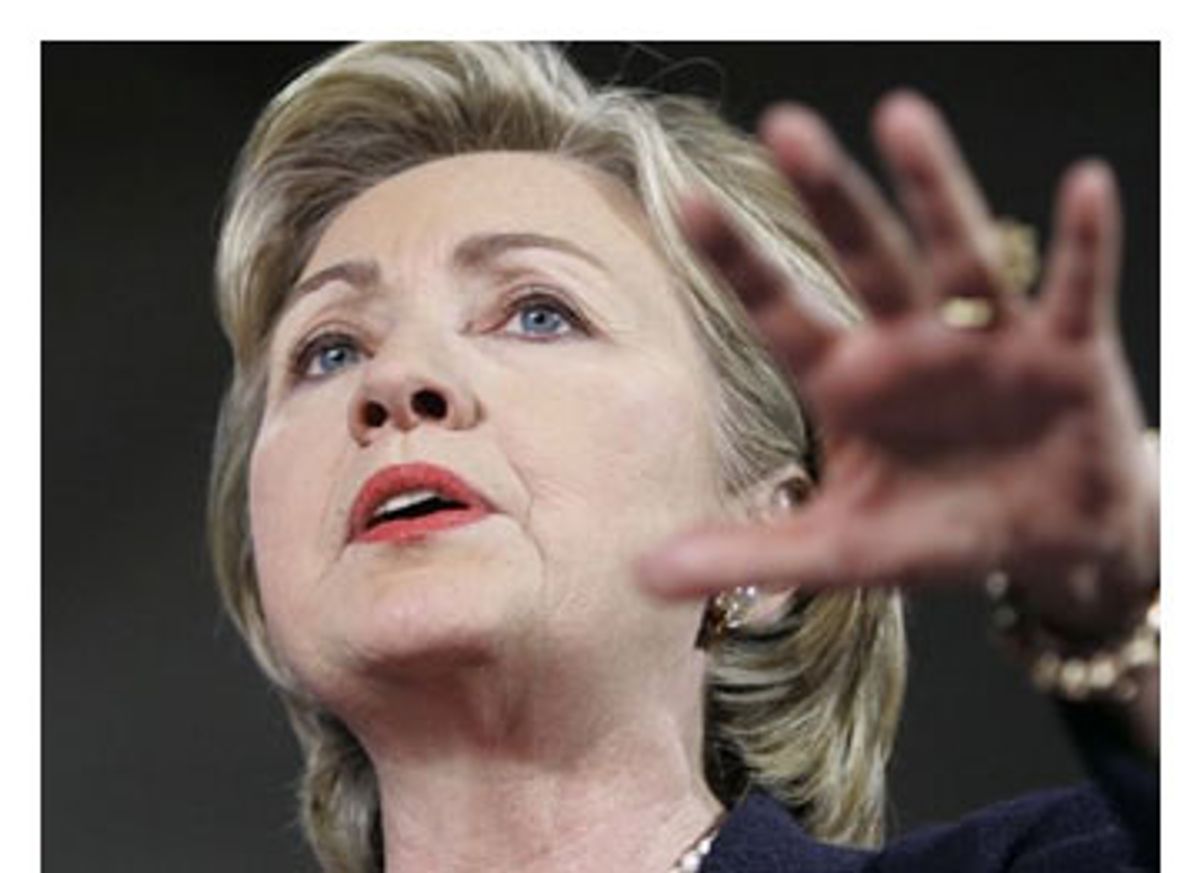 Almost four years after the U.S. invasion of Iraq, the war there remains the single most important issue of the campaign for the 2008 presidential election. On the Democratic side, two of the front-runners -- Sen. Barack Obama, D-Ill., and former Sen. John Edwards, D-N.C. -- have managed to stake out positions as war opponents. Obama, who was still a state legislator at the time Congress voted to authorize the use of force, vehemently opposed the war. And Edwards, who as a senator did vote for the war, has apologized for that action, which seems to have gotten him off the hook with many voters. Only Sen. Hillary Clinton, D-N.Y., remains resolute about her vote for the war, admitting she wouldn't do it again, but refusing to apologize for it. It's an issue that has, so far, dogged her with voters.

For the most part, Clinton has tried to portray herself as an innocent duped by an administration that had a monopoly on the facts, then lied about them. "I'm not going to believe this president again," she said on NBC's "Today Show" this past December. "Obviously, if we knew then what we know now, there wouldn't have been a vote, and I certainly wouldn't have voted that way."

It's a convenient out, but it's not really true. Though often maligned or ignored altogether, there were plenty of voices -- some of them from the highest levels of the military and intelligence establishments -- warning that the case the administration had laid out was not as clear-cut as it seemed, that postwar Iraq would not be the land of flowers and chocolates administration officials promised.

What follows is the collective wisdom of some of those voices.

Aug. 15, 2002 -- The national security advisor to Presidents Ford and George H.W. Bush, and for three years chairman of President George W. Bush's Foreign Intelligence Advisory Board, Brent Scowcroft was a foreign policy realist who favored stability over the grand ambitions of the neocons, and was largely derided for doing so. In an Op-Ed for the Wall Street Journal, "Don't Attack Saddam," he laid out his case: "There is scant evidence to tie Saddam to terrorist organizations, and even less to the Sept. 11 attacks. Indeed Saddam's goals have little in common with the terrorists who threaten us, and there is little incentive for him to make common cause with them.

"He is unlikely to risk his investment in weapons of mass destruction, much less his country, by handing such weapons to terrorists who would use them for their own purposes and leave Baghdad as the return address. Threatening to use these weapons for blackmail -- much less their actual use -- would open him and his entire regime to a devastating response by the U.S. While Saddam is thoroughly evil, he is above all a power-hungry survivor. Saddam is a familiar dictatorial aggressor, with traditional goals for his aggression. There is little evidence to indicate that the United States itself is an object of his aggression."

Sept. 13, 2002 -- Though most of the press passed on all too credulously the administration's false information, some did publish stories questioning the spin. On this occasion, the Washington Post's Dana Priest and Joby Warrick were among them: "The White House document released yesterday ... contains little new information -- and no bombshells -- showing that [Saddam] Hussein is producing new weapons of mass destruction or has joined with terrorists to threaten the United States or its interests abroad ... Experts on Iraq's weaponry say that on [the subject of ballistic missiles] the report, with few exceptions, recycles a mix of dated and largely circumstantial evidence that Hussein may be hiding the ingredients for these weapons and is seeking to develop a nuclear capability and to weaponize chemical and biological agents ... 'Given the high priority for knowing what is going on in Iraq, I'm stunned by the lack of evidence for fresh intelligence,' said Gary Milhollin, executive editor of Iraq Watch, a Washington-based nonprofit institution that tracks developments in Iraq's weapons program. 'You'd expect that, for the many billions we are spending on intelligence, they would be able to make factual assertions that would not have to be footnoted to an open source.'"

Sept. 25, 2002 -- Sen. Russ Feingold, D-Wis., voiced some of his concerns at a hearing of the Senate Foreign Relations Committee: "I have attended numerous briefings and read countless reports from a variety of sources. I have listened carefully to the Administration. And I have read, quite closely, the proposed resolution authorizing the use of force that the Administration sent to Congress last week. After all of this, I still do not have answers to some fundamental questions. I remain extremely troubled by the Administration's shifting justifications for going to war in Iraq. I remain skeptical about the need to take unilateral action now and to accept all of the associated costs of that decision. I remain unconvinced that the Administration has thought through the potential costs and challenges of post-conflict reconstruction in Iraq, or even thought through how to address the issue of weapons of mass destruction once an engagement begins."

Also on this day, Rep. Ike Skelton, D-Mo., penned an article for the Hill, the influential political newspaper in Washington. Though Skelton would end up voting for war, he was a longtime leader of the party on military issues, and in his piece, he reflected the concerns of many in the military: "While the Bush administration cites the threat of Iraqi WMD, the case has not yet been clearly made as to why military force is an appropriate way of addressing the threat, and why action must occur now.

"I have no doubt that our military would decisively defeat Iraq's forces and remove Saddam. But like the proverbial dog chasing the car down the road, we must consider what we would do after we caught it.

"Any strategy must consider the form of a replacement regime and take seriously the possibility that the Iraqi people might reject it, leading to civil unrest and even anarchy. What will we do with Iraqis that continue to support Saddam, and with the scientists and engineers with expertise born of the Iraqi WMD program? Can we create a stable regime that's geopolitically preferable to Saddam and incorporates the disparate interests of all groups within Iraq -- Shi'a, Sunni, and Kurd?"

Oct. 7, 2002 -- In an article titled "Hail Caesar!" Salon's Gary Kamiya explored President Bush's foreign policy and its implications and considered the cost-benefit ratio posed by the talk of invasion: "It is impossible to know what will happen. But deciding whether or not to invade Iraq requires making a judgment about the possibility that the Middle East may go up in flames as a result, or that the attack will breed future terrorists in the region and around the world, or that other nations will emulate us and launch invasions of their own, or that our allies will turn away from an out-of-control America -- and balancing those possibilities against the chance that Saddam will use WMD at some point in the future. Confining ourselves only to one possible negative consequence, dangerous instability in the Middle East, the answer is clear: It is much more likely that an invasion of Iraq will inflame the Middle East than that Saddam will use WMD against the United States or its allies. Even if al-Qaida never existed and there had never been a Sept. 11, invading a major sovereign Arab nation would be an extremely risky undertaking, one likely to spin out of our control."

Oct. 10, 2002 -- Retired Marine Gen. Anthony Zinni, formerly the head of the military's Central Command, which oversees operations in the Middle East, was intensely skeptical of the Bush administration's plans to invade, repeatedly warning that the occupation would be vastly more difficult than the administration believed. In a speech at the Middle East Institute, he gave one of his most rousing denunciations of the coming war: "If we think there is a fast solution to changing the governance of Iraq, then we don't understand history, the nature of the country, the divisions, or the underneath suppressed passions that could rise up. God help us if we think this transition will occur easily ... There were 98 opposition groups the last time I counted; I think now it has increased a little bit. If you believe that they're all going to rush to the palace, hold hands and sing Kum Ba Yah, I doubt it. If you think that people won't see opportunity to do things that will cause concern in the region, whether to the Iranians, the Turks or others, and go against what we hope will happen and against agreements that will be made, then I think you could be sadly mistaken. If you think it's going to be easy to impose a government or install one from the outside, I think that you're further sadly mistaken and that you don't understand this region ... The attempts I've seen to install democracy in short periods of time where there is no history and no roots have failed. Take it back to Somalia and other places where we've tried. It's not an easy concept. It's not an easy form of governance to put in place and to be understood. Remember it happened well for us. We had a revolution of elites in this country, which is the exception. Every place else where this has happened, it's been bloody, difficult, and long term with a lot of friction. We can ill afford that in this part of the region."

Dec. 6, 2002 -- Scott Ritter, the former United Nations weapons inspector, was demonized and marginalized before the war for his frequent opposition to the invasion and for his belief that Iraq did not possess the WMD the administration claimed. In retrospect, of course, he was vindicated, but this day saw him relegated to speaking to an audience of 500 at the University of Utah's Museum of Fine Arts Auditorium. "If Iraq threatens the security of the United States, the people in this audience, then maybe we have a case for war," he said. "But I haven't seen any facts to back up the allegations that Iraq has weapons of mass destruction. Let's put proof on the table before we act."

March 19, 2003 -- Speaking to the Senate on the eve of the invasion, Sen. Robert Byrd, D-W.V. inveighed against the war in the strongest possible terms: "After war has ended, the United States will have to rebuild much more than the country of Iraq. We will have to rebuild America's image around the globe.

"The case this Administration tries to make to justify its fixation with war is tainted by charges of falsified documents and circumstantial evidence. We cannot convince the world of the necessity of this war for one simple reason. This is a war of choice.

"There is no credible information to connect Saddam Hussein to 9/11. The twin towers fell because a world-wide terrorist group, Al Qaeda, with cells in over 60 nations, struck at our wealth and our influence by turning our own planes into missiles."