The yellowing of America: Baseball to force off-field employees to fill jars to prove themselves innocent of drug use. 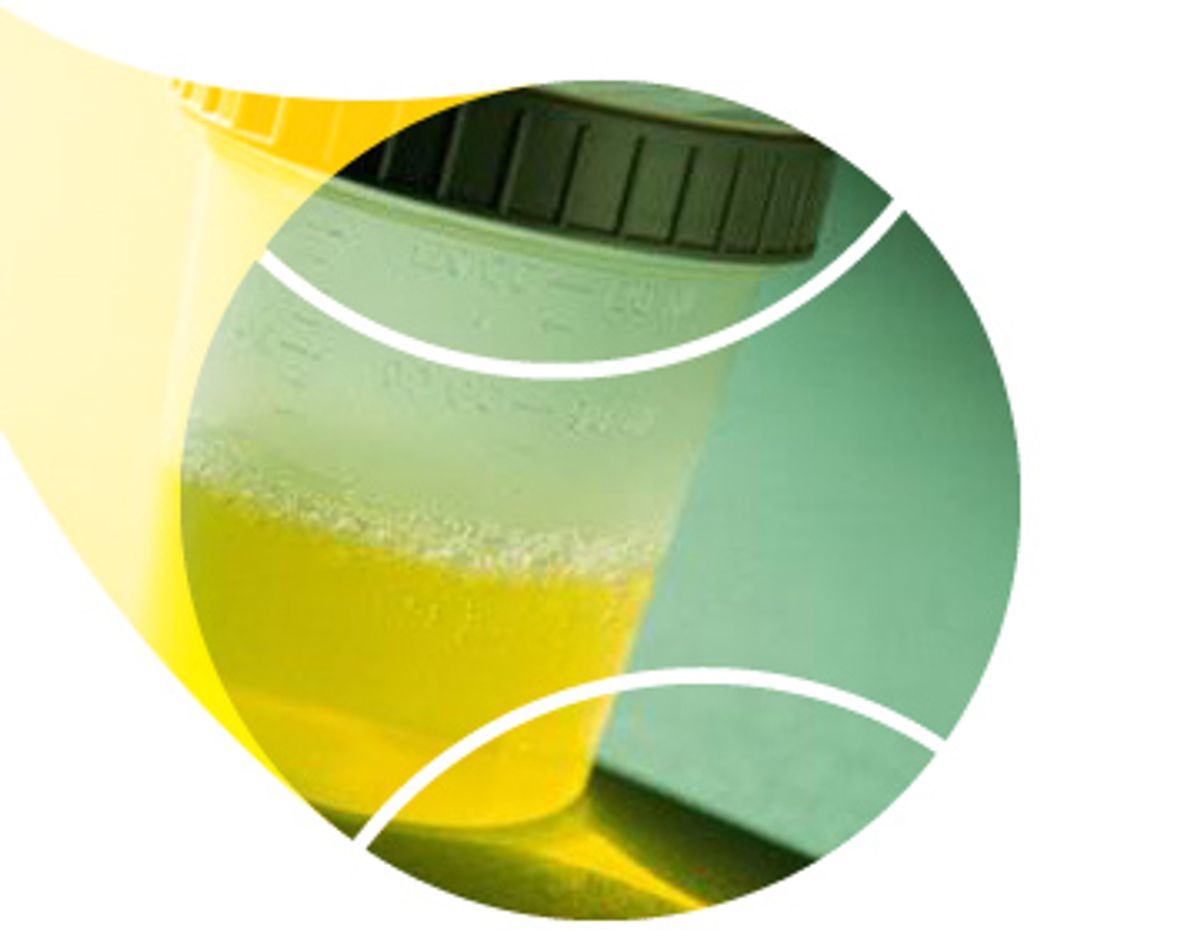 Baseball fans worried that the woman who swipes their credit card at the box office might be juicing can rest easy. Worry not, good spectators, that the underassistant director of Caribbean scouting might be cycling roids.

It's not clear why secretaries and equipment managers have to be drug-free for Major League Baseball to operate as a safe and successful business, but the policy appears to be a defensive legal maneuver.

"In order to be consistent," MLB spokesman Rich Levin told Brown, "the [testing] policy has to be applied to everyone in MLB, not just the players."

Why? Has anyone demanded that airlines drug-test not just pilots but also reservations clerks, just for consistency's sake? Here's the real money quote, from former Sen. George Mitchell, who you may remember has spent the last 11 months conducting an investigation into drug use in baseball. That is, when he hasn't been helping O.J. Simpson look for the real killers.

"Based on a review of recent history," Mitchell told the club owners at a January meeting, "and on many discussions I've had over the past several months, I believe that a report that is not credible and thorough will significantly increase the possibility of action by others, especially if it's the result of a lack of cooperation by the clubs, or by anyone who is or has been involved with baseball."

By "action by others," Mitchell means his old co-workers, Congress. Baseball doesn't want Congress getting involved, ever.

Recent baseball-Congress exchanges have included Mark McGwire turning himself from hero to pariah in a matter of minutes by repeatedly insisting he wasn't there to talk about the past and Selig telling a committee that baseball was hemorrhaging money, causing Rep. Maxine Waters, D-Calif., to admonish, "Let me remind you that you're under oath."

What baseball wants Congress members to do is sit there nicely, enjoy a Nationals game on the lobbyist whenever they'd like, and make sure nothing happens to the antitrust exemption.

So the next time Congress comes galoomphing around making C-SPAN-friendly noises about how if baseball's not going to do something about the drug problem then by gosh the United States Congress will just have to, baseball can say, "Do something? Are you kidding me? We're drug-testing the freakin' receptionist!"

Which of course ignores the problem that the receptionist is loading up the Post-it notes and using a corked telephone headset, but does Congress care about that? I think not.

Three years ago -- almost to the day -- I changed my tune about drug testing in baseball, writing, "It's time for the players union to give up its opposition to testing" because the customers were demanding it, and because of the sad state of affairs that there is credible suspicion of guilt for pretty much any player who has some success in a major league uniform.

I've been uneasy about that stance ever since, and baseball's new policy is an illustration of what it is I'm uneasy about. Look how easy it is for MLB, the company. We're drug-testing the players, so let's just go ahead and drug-test the mailroom workers and marketing people too. Big shoulder shrug.

Now I'm thinking I went too far in 2004. So there's widespread suspicion about anybody who pulls on a big-league uniform. So what. When there's specific suspicion -- say when a player's name shows up on the customer list of a lab that's been raided by federal authorities on suspicion of supplying illegal performance-enhancing drugs to athletes -- let's deal with that specific suspicion, maybe including a drug test.

Forcing workers, even very rich, very privileged workers, to surrender their rights just for the chance to make a buck is not what the America I grew up learning about is supposed to be.

I'm thinking all that, but I'm also thinking I'm barking at the moon. This horse isn't just out of the barn, he's wearing a DEA windbreaker and staking out my house. (Full disclosure to any federal authorities who might be reading: I'm drug-free, but I rob about a bank a week.)

Random workplace drug testing is simply a fact of life now. Hey, they test those ballplayers, why not us? Click on the drug-testing link on the American Civil Liberties Union Web site and you'll find a list of press releases, two of which have been issued since Christmas 2003.

Objecting to drug testing on privacy grounds is just so 20th century. Line up and pee, baseball people. That's how the world works now.

Previous column: Time for a Hall of Fame revamp