The Republican candidates -- and Ann Coulter -- try out their acts

At the Conservative Political Action Conference, Giuliani flops and Romney shines as the GOP presidential contenders promise the right-wing faithful everything, including a cure for cancer. 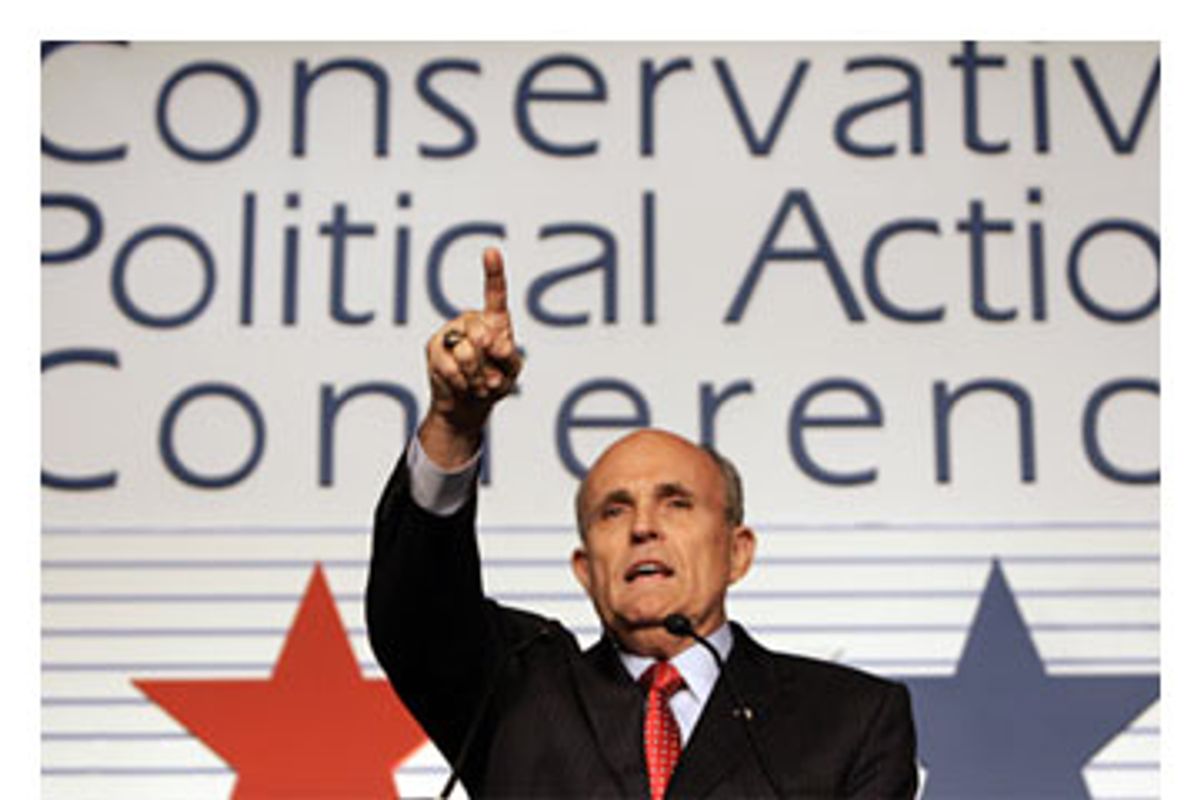 The Ann Coulter presidential primary ended on Friday, before an oversold crowd of Republican college kids and conservative activists in a basement hotel conference room. She had just finished doing her incendiary stand-up act, joking that Al Gore was fat ("Did Al Gore actually swallow Michael Moore?"), that Bill Clinton was the first black president ("half white, half trash") and that John Edwards was a "faggot."

Then a question came from the audience. What did she think of Mitt Romney, the former Massachusetts governor now running for president? "I think he is probably our best candidate," she said, with a sudden lack of sarcasm, prompting a round of applause from the room. "I think we have to be serious about this."

No one at this year's Conservative Political Action Conference was taking the upcoming presidential election lightly. For the first time since 1996, the Republican Party finds itself with no single front-runner and no clear conservative standard-bearer. "Ronald Reagan is not with us," explained David Keene, the chairman of the American Conservative Union, sponsor of the event, which drew every GOP presidential contender with the notable exception of John McCain. "None of them are perfect." Meanwhile, the national mood has turned on the Republican Party. A recent New York Times tracking poll shows that the party has a favorability rating of just 38 percent, compared to 48 percent for Democrats, the lowest score in the poll since 1998. "This conference is called CPAC," joked Mike Huckabee, a former Arkansas governor who is running for president. "Maybe this weekend it might be named the 'Conservative Presidential Anxiety Contest.' " He paused a beat and then added, "Dude, where's my candidate?"

All of the Republican candidates except McCain, who was campaigning in Utah, were on hand to pander, dazzle and plead for conservative support. California Rep. Duncan Hunter, the former chairman of House Armed Services Committee, promised to sink more money into the military-industrial complex to ward off threats from China. Huckabee bragged that he was the first governor in America with a concealed carry permit: "So don't mess with me." Kansas Sen. Sam Brownback vowed to attempt "eliminating deaths by cancer in 10 years." Colorado Rep. Tom Tancredo, the anti-immigration crusader, told the crowd that Miami was becoming a "third-world country" and that America was becoming a "linguistic and cultural tower of Babel."

But most of the attention was focused on the two front-runners in attendance, Romney and former New York City Mayor Rudy Giuliani. The contrasts between the two were striking. Giuliani delivered a halting, meandering address that lasted 40 minutes, with extensive ruminations on international capitalism and education reform. "I don't agree with myself on everything," he insisted at one point, delivering exactly the sort of sound bite that a presidential candidate wants to avoid. Later he proclaimed, "The genius of America is the free market, private solutions, competition and ultimately the profit motive," suggesting that he thought he was at yet another of the corporate speaking gigs that have enriched him over the last five years. He mentioned Iraq only once, in passing, and did not address social issues like abortion or gay marriage. As the speech trailed on, he appeared to gradually lose the attention of the audience and even himself. "George Bush was in office for eight months -- it had to be eight months -- when September 11 happened," he said in a moment of confusion.

Romney, by contrast, delivered a piercing 22-minute stump speech that was designed to elicit one burst of applause after another from the conservative crowd. He brought his wife onstage to speak, underscoring the fact that they have been married 38 years. (Both Giuliani and McCain have had multiple marriages.) He bad-mouthed liberal policies in Massachusetts and poked fun at Sen. Ted Kennedy. "Kennedy's liberal social programs weren't solving poverty," said Romney, who has the square jaw and white teeth of a television news anchor. "In fact, they were creating a culture of poverty." He also tried to address criticism that he had changed positions on abortion and gay marriage. "I stood at the center of the battlefield of every major social issue," he maintained. "I fought to preserve our traditional values and protect the sanctity of human life."

Though he trails both Giuliani and McCain in national polls, Romney had had some success in recent weeks in convincing conservative leaders that he can carry the mantle of Ronald Reagan. "As we know, in Governor Romney we have a man who respects family values," said Republican activist Grover Norquist in his introduction. "He represents the entire [Reagan] coalition and has great competence." Religious-right leaders like Connie Mackey of the Family Research Council have also begun to express clear sympathy for Romney, despite his Mormon faith. "He is a lot more accepted than people expected by the evangelical community," she said.

Perhaps in another sign of Romney's rising reputation among party insiders, activists trolled the grounds of the conference with gimmicks designed to attack the former Massachusetts governor as a reincarnation of Sen. John Kerry, who ran for president in 2004. A self-described blogger for a Web site called Students Against Mitt handed out foam flip-flop sandals with facts about Romney's past support for Democratic candidates. A conservative group called MassResistance distributed a mock "multiple choice" quiz about Romney's shifting position on social issues. And a man in a dolphin suit trolled the hotel grounds with a T-shirt that called Romney "just another flip-flopper from Massachusetts." When asked who he was working for, the dolphin turned and fled from this reporter, muttering, "By myself, just flipping around, flipping around."

The attacks reflect a fear among supporters of McCain and others that Romney, rather than the pro-choice Giuliani, could become the major stumbling block to the nomination. "Social conservatives are never going to own John McCain," explained one GOP strategist. "But I think there is a possibility that social conservatives will own a part of Mitt Romney." McCain was not helped by his conspicuous absence at the conservative conference. "The senator has run, been elected and served as a conservative and looks forward to talking about his conservative record throughout the campaign," said McCain spokesman Brian Jones, in a statement released on Tuesday.

Keene, the organizer of the event, said the McCain campaign attempted to get hotel space for a reception, but only after it had discovered that Giuliani would be attending. By the time the campaign tried to book space there was none available. "It's a puzzle," Keene said of McCain's initial decision to avoid the event. "He would have been well received."

The CPAC conference long ago became an annual rite for conservative activists, a gathering of leaders and a carnival-like circus for thousands of college students who spend three days socializing in Washington. The Entertainment Software Association set up an exhibition booth so the young people could play video games like "Guitar Hero" and "Dance Dance Revolution." The Owner Operated Independent Drivers Association, a trade group for long-haul truckers, outdid that trick by bringing in a full-size car that simulated the experience of a NASCAR race. Attendance this year was expected to pass 6,000, up from about 5,000 last year, with roughly half the tickets going to college students.

As always, one of the hottest bills at the event was the appearance of Coulter, who regularly speaks at college campuses and has built up a considerable following among Republican youth. Not one to disappoint, she came out blazing with an act she described as "all-purpose right-wing blowhard." Dressed in a low-cut shirt with a black leather vest, she denied that she was "anti-gay" after using a gay slur to describe Edwards, the Democratic candidate. In fact, she joked, gay voters should be natural Republicans, because the party advocates low taxes for the wealthy and an aggressive approach to crime. "Gays make a lot of money and are victims of crime," she said. As always, her gibes were met with riotous laughter and applause.