Cohen's entire career is filled with radical militarism, ideas that should be carefully examined before he becomes counselor of the State Department.

As noted earlier today, new Bush appointee at the State Department, Eliot Cohen, expressly views the U.S. not as a republic, but as "a global empire," and his entire foreign policy world view is centered around the need to maintain and expand that empire through an "imperial strategy." Cohen believes, in essence, that the U.S. should rule the world through superior military force. And in particular, he has long urged the U.S. to change the government of Iran using any means, and has repeatedly argued against even negotiating with the Iranians as a method for resolving our conflicts.

Cohen has written multiple times over the year for Commentary Magazine -- ground zero for neoconservatism. One of the essays (.pdf), from 1982, was entitled Why we Need a Draft. In it, Cohen argues that a draft must be reinstated because that is the only way to preserve military readiness, and because an all-volunteer force produces troops who are too stupid to fight and, worse, forces the U.S. to allow females into the military, which destroys the macho fighting spirit needed for an effective force.

Cohen specifically emphasized the unfairness of having the U.S. dramatically expand its military commitments while having only the poorest and dumbest in the society serve in the military, which -- Cohen says -- is what happens with an all-volunteer force. This is the title:

Cohen begins by reciting the arguments against a draft, but then notes how pervasively stupid American troops have become under an all-volunteer force: 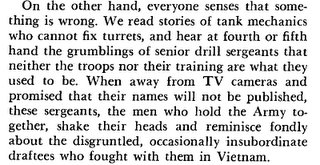 Cohen next documents just how dumb he thinks the troops are: 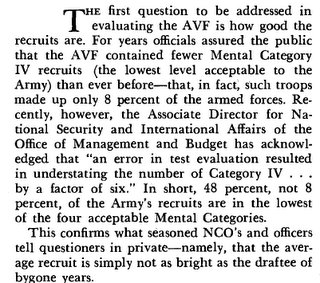 The big problem for Cohen in having such stupid troops as a result of an all-volunteer force is that the U.S. was being forced to use women as soldiers, and nothing would destroy the manly fighting spirit as much as that would: 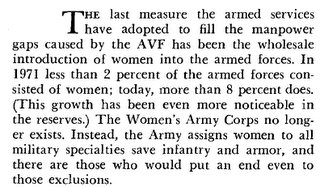 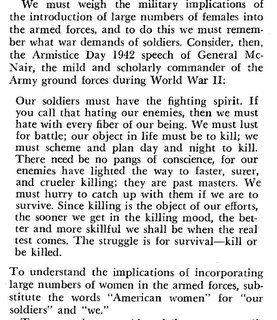 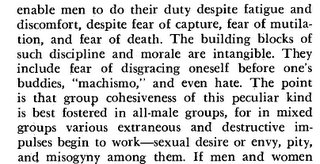 Cohen specifically cited the grave unfairness of having wars where only our poorest young people risk their lives: 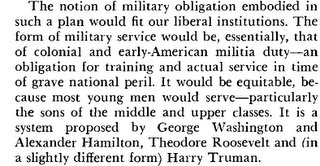 And Cohen ended his call for a draft by emphasizing that it is necessary to enable the U.S. to meet its ever-expanding military obligations -- obligations which Cohen, today, wants to expand beyond anything anyone dreamt of back then: 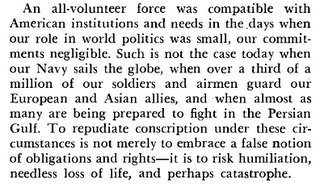 It's true that this essay was from 1982, but I have read a lot of Eliot Cohen today and saw nothing in which he repudiated any of this (which doesn't mean he still embraces it, but it seems like he should at least be asked). Recall that Republicans accused Jim Webb of sexism for arguing back then that women should be excluded from combat -- a position less extreme than Cohen's argument against women in the military. And John Kerry was mauled continuously, of course, for suggesting inadvertently that there is a correlation between volunteer service and intellectual limitations -- a point which Cohen made expressly and continuously. And the idea of re-instating the draft in order to fulfill grand military conquest -- conquest which Cohen, to this day, champions as much as ever -- is as radical an idea as it gets.

To be fair, essays that are written two decades ago have limited value, though not none -- especially where the arguments have not been convincingly repudiated. The relevant point here is that Cohen has spent his entire career working on the fringe, always with more militarism and love of war than virtually the entire mainstream population. Given that he is about to assume to a very influential position in the State Department -- at exactly the time when our interactions are most critical with regard to countries on whom Cohen clearly wants to wage war -- some sort of meaningful examination of his views, or at least questioning of the State Department about these views, seems warranted.

UPDATE: One of the principal reasons I think this Cohen appointment is so notable, and disturbing, is because the Counselor he is replacing -- Philip Zelikow -- was one of the few remaining influential, old-style realists in the administration who favored negotiations with the Iranians as a means of avoiding war. Reader AB emailed me this September, 2006 Zelikow speech, which he heard Zelkiow deliver, as but one example, in which Zelikow argued:


One of the concerns I have about my friends, some of them on the conservative side, who argue that we don't have the resolve to face up now to the binary, uncomfortable choice we should face between war and peace is that they've already shoved the diplomacy aside. They're anxious to get to the real issue, the interesting issue, the glamorous issue. Then it's a self-fulfilling prophecy; we assume the diplomacy won't work. Let's talk now about the war and peace problem. How about we try to make the diplomacy; work because Iranian leaders do need to face that choice. That's the message the president was conveying.

Why, at this critical time in our relations with Iran (not to mention the larger Middle East), has one of the few pro-negotiations officials been replaced by one of our country's most extremist warmongers, who has expressly argued in favor of overthrowing the Iranian government and against negotiating with them? Isn't that shift at least worth some discussion and examination, particularly in light of what appears to be a fairly rich record of fringe pro-militarism statements by Cohen? At the very least, it's as good of an opportunity to compel a debate over these critical issues as any that has been presented in awhile.