A black mother's gift to her biracial children. 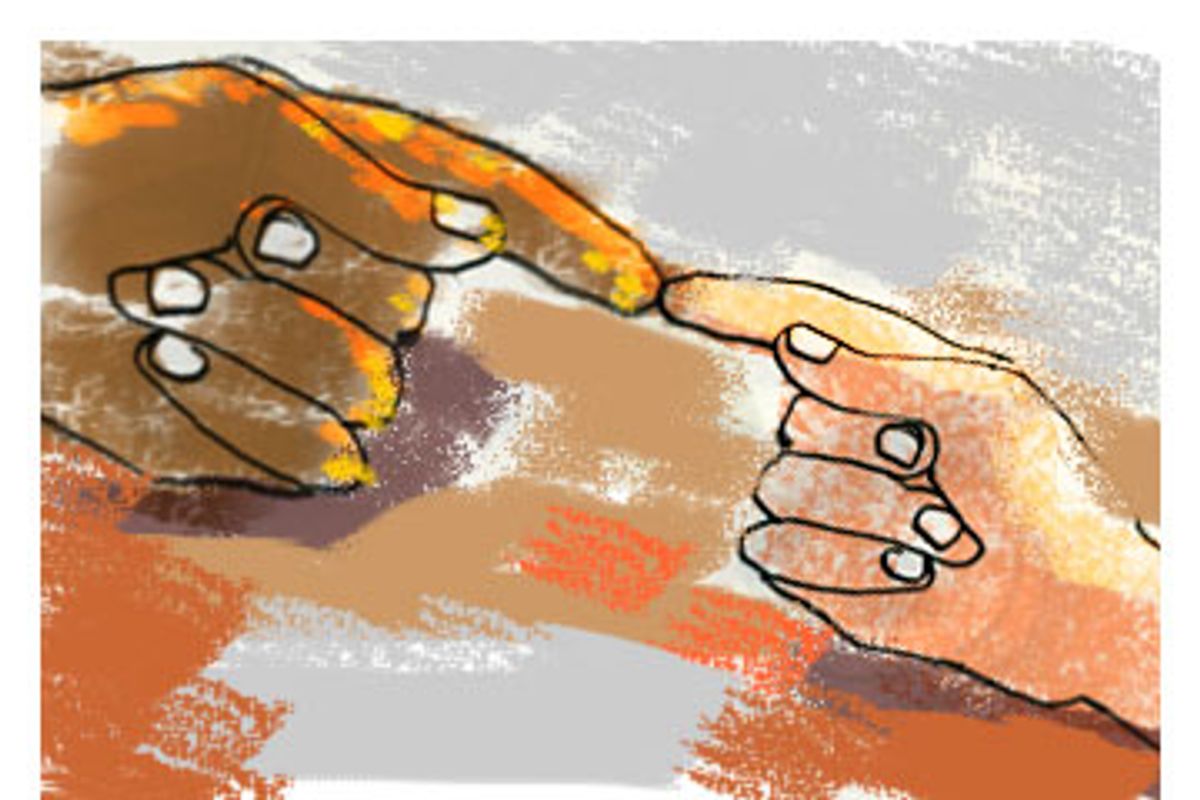 Out of the blue last week my son, who is 5, asked me if I'd ever been "burned." I thought he was referring to the tattoos that I always tell him and his sister are boo-boos (how else to justify voluntary scarring when I won't even let them use a butter knife?), so I repeated my usual lie and added that "Mommy would never play with fire." I thought this was a safety discussion. He looked confused.

"Oh. I thought that was why you were brown."

My biracial, white-looking baby is discovering race. Granted, both of my children think my nappy, unprocessed, Sideshow Bob hair looks that way simply to entertain them, and never understand why everyone asks if I'm their nanny. I can't say I wasn't on notice. But I'd envied them their racial innocence. Too bad them days are over.

My son first brought up the subject of race two months ago. I took him and his 3-year-old sister to a concert at an inner-city elementary school right before Christmas. There were lots of cornrowed kids singing "Jingle Bells." My own child, as he sat fidgeting in my lap, stared at the crowd around him goggle-eyed and perplexed.

"Mommy," he said, craning his neck to scan the room, just so he could be certain, "everybody's brown. Really, look! They're all brown."

We live in snow-white upstate New York, but was he really so clueless?

"Why is everybody brown, Mommy?"

Yup. He was. Caught unawares, I just gulped for air. But he was waiting for an answer.

"Really, Mom. Everyone's brown. Everyone. Why?"

Finally, I responded. "Mommy's brown, honey," I said, and I covered his hand with my own. "See?"

This did not compute. He blinked at me a few times and went back to squirming around and checking out all the brown people in the room.

The music was playing but his questions continued. I talked about how, like Mommy, these people had two brown parents while he and his sister had a brown mom and a ... "not brown" dad. (My kids are not brown at all; homie's blond and his sister has waist-length ringlets with natural blond highlights.) I told him that he and his sister would likely get "browner" as they got older and talked about variety being the spice of life. I analogized from the many colors in his paint box and reminded him that his Grandma Johnnie was brown but that his Grandma Ruth was ... not brown. Then, I took a deep breath and laid it on him.

"Honey. You're black. Did you know that?"

And even as the words left my mouth, I knew they made no sense. He was talking skin color, I was talking politics.

Hopelessly lost now, he just gaped up at me. Then he pulled his black clip-on tie from his sweater and said, helpfully, "My tie is black." Still wriggling on his brown mommy's lap, he went back to staring in confused wonderment at all the Negroes.

Now, two months later, he has come up with an explanation. "They" are all brown because "they" are irresponsible with flammables. I know I need to nip this in the bud. But how on earth do you explain things as complicated as race and blackness to creatures who believe that the police will know when we need help because they all have baby monitors in their cars? They're so young; I'm still in the gooey, overprotective stage of motherhood wherein I shield them from knowing about crime, homelessness, war, rape, pedophilia and the horrors of capitalism. But I'm supposed to tell them that white people, their father's people, enslaved, raped, sold and Jim Crow'd us simply because we look burned all over? And I'm supposed to tell them now, when my 3-year-old daughter is still oblivious to the whole subject of race, that racism is far, far from over? Even if I wanted to tell them all this, I'm not sure where I'd start.

And then, last night, while still meditating on my son's burn theory, I located the true source of my ambivalence about helping my children discover their blackness.

Like most kids, mine love to "give me five" to signal any sort of triumph. Last night, I realized that I'd stifled a reflexive impulse to teach them part of the high-five -- "on the black hand side." Back in the militant '60s and early '70s when I was a kid, black men would often slap each other five, then flip their hands over and do it again on "the black hand side" or "the black man's side." Now it's rarely done and only then as kitsch, but what explains my hesitance, my refusal, to initiate my children into the club when this relic of my identity formation naturally surfaced? As I thought about that, all at once it hit me that I never "talk black" with my kids either. None of the "used ta coulds" and "mighta woulds" and "he be's" that I slip into so comfortably with my Miss'ippi mama and relatives back home. Without realizing it, I had made Chez Debra Ebonics-free when the kids were in earshot, even though my bilingualism has been the key to my mainstream success. So why wasn't I teaching them to be bilingual? Why was I refusing them their ghetto pass?

If I'm honest, I know why. It's because I know they're not black. I am but they're not. They're biracial.

I lived blackness. All they can do is study and perform blackness. My parents were Mississippi sharecroppers who became part of the Great Migration north. My great-grandfather, who lived well past 100 and was still kicking when I was a child, had been born a slave. His son, my grandfather, got a "Klan escort" out of Mississippi. I saw "Whites only" signs when we went visiting down south and remembered white cops coming to my A'int Mazelle's to "urge" her to teach her kin from up north in St. Louis "how to behave." Clueless, I hadn't yielded my place in line to whites at the country store. At my own home in Missouri I knew not to enter South St. Louis after dark, and I grew up sharing my World War II combat veteran father's bitterness at the racism of the Marine Corps. Segregation made black culture pervasive in our lives; the same oppression that so limited our options gave us all a common frame of reference. My kids can only study that in books.

I never make them the soul food I grew up eating -- it's so unhealthy, however heavenly. Besides, I only know how to make cornbread and cabbage for eight. I live far, far from my relatives; my kids have spent far more time with their relatives on their father's side because travel is foreign, and too expensive, for my working-class family. I lasted only a few Sundays taking my kids to a black Southern Baptist church like the one I attended growing up because I couldn't, in good conscience, give my implicit stamp of approval to all that drove me away in the first place. We belong to a Unitarian church now, though I deeply miss gospel music. Had the kids and I stayed in D.C. things might be different, but now that we live in upstate New York, we encounter very few black people and even fewer who are not mainstream professionals, with all the requisite class implications that follow (affluent, private-school educated, i.e., not very culturally black).

I can't bring myself to turn my kids into cultural tourists of their mother's people by, for example, sending them to black church camps during the summer, like some of my bougie black friends have done. Blacks are not exotic creatures to be visited on brief safaris. How could I ever make my daughter understand why I wept through "The Color Purple" on Broadway a few weeks ago? Truth be told, I don't even want her to understand how cathartic that was for someone born a poor and very black woman. I don't want to force experiences on my son and daughter just to make them feel black. And that's not because they look white. It's because they're half-white, features be damned.

As much as blacks bemoan the "one drop rule," no one works harder to enforce it and keep it alive. See: blacks' attitude toward Tiger Woods. I thought he was as much a self-hating sellout as most blacks did with his "Cablinasian" routine. Then, I heard him say that he didn't consider himself solely black because it was an insult to his mother. That nearly blew a hole in my brain. He's absolutely right -- it is an insult to the mother who carried him, birthed him in agony and raised him. Why on earth should her Thai heritage count for nothing and his dad's black heritage count for everything? If my children ever self-identify as "white" I'll be crushed. That would be tantamount to saying all my love and sacrifice and devotion meant nothing. Mrs. Woods is not a brood mare and neither am I. If my kids end up identifying as "black" rather than white or biracial, I'll be secretly pleased. But in the end, if they can go toe to toe with me, they can consider themselves whatever they like.

Given the level of intellectual and moral rigor to which I plan to hold my children, I can't in good conscience as a human being tell them which category to pick, if any. If that means they prefer sushi to fried catfish, so be it. If they prefer Europe to Africa, if they're consumed by environmentalism but not civil rights, fine. Since my son recently whined about wanting a bigger house and blithely opined that "everyone has a car," I'm more focused on teaching them about class and injustice than race right now. Still, I dug out all the old family photos of my Jim Crow ancestors to teach them about their forebears as individuals, not via their relationship to whites (that will come later). I've also invested in books like "I Like Myself," "The Skin I'm In" and "The Colors of Us" to teach them about all the variations in the human race and among people of color. I want them to understand that their lives will be enriched by diversity, not by forced field trips to where the Negroes live. We break out the globe frequently and I teach them about Africa and England, the two places I know figure in my bloodline. I ask them to get Daddy to tell them about their Scottish and Norwegian heritage, but I doubt he does. No matter, the world will teach them about their whiteness.

My attitude on all this will undoubtedly evolve with time and my kids will come home with more and more questions about being black. I still don't know what to do with the more exclusionary facets of our culture, like Ebonics or "on the black man's side." I don't know whether I'm begrudging them their blackness or sparing them baggage that might hold them back, but we've got time. I look forward to it, because, like the T shirt says, if you love something, set it free. I grew up black. They're growing up multiracial citizens of the world, born to two cultures, neither more worthy or intrinsically interesting than the other. Because passing for black is no better than passing for white.