The low-rated but brilliant drama "Friday Night Lights" needs a Hail Mary pass from NBC if it's going to see a second season. 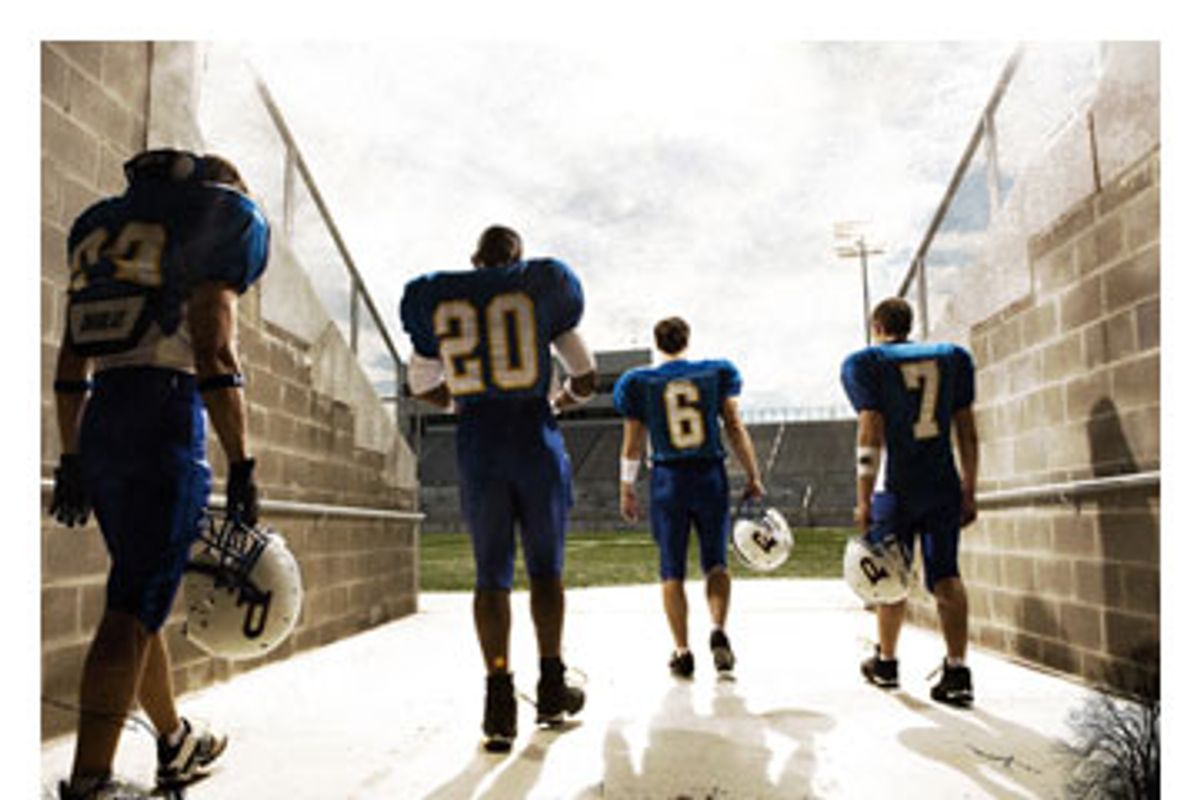 I wasn't a huge football fan in high school, but there was something special about a home game on a Friday night. When those glowing lights over the stadium would come on as the sun was setting orange and pink on the horizon, I was always glad that I came. It didn't matter if we won or lost (we usually lost), what mattered was that the field looked bright green under the lights and the fall air had a chill and you could hear a cadence of drums in the distance as the marching band approached. No matter how much I hated high school that day, it all melted away and suddenly it felt good to be 16 years old, to have a taste of that little-fish small-pond romanticism you get when you recognize half the people in the crowd and feel like a part of it all. When the lights came on and the band started up, the world felt big and colorful and full of promise.

Nothing has ever come close to capturing that feeling for me until the premiere of NBC's "Friday Night Lights" last fall (8 p.m. Wednesdays), a drama that tackles the sweetness and the awkwardness of high school like no other show I've ever seen. In fact, compared to the originality and realism of "Friday Night Lights," other TV shows about high school look as idealized and as silly as an Archie comic book. Instead of trading witty banter and landing neat punches to the jaw, the kids on "Friday Night Lights" have stilted, clumsy conversations in which they stare at their shoes and giggle and try to act like they're not completely confused and overwhelmed. Like real teenagers, they hold down crappy jobs, worry about how to act around other kids, second-guess their decisions, and fumble into dysfunctional friendships. They don't know how to talk to their parents, and their parents don't know how to talk to them.

Based on the book by H.G. Bissinger and the movie directed by Peter Berg (who's also an executive producer on the show), "Friday Night Lights" focuses on football mostly as a means of accessing a rich web of relationships in a small town in Texas. That said, the absurd importance of high school football to the townspeople and the arbitrary nature of the wins and losses of the team coincide nicely with the premise that the writers are only beginning to explore, something about the pull of big, unrealistic hopes and dreams on a bunch of kids who are surrounded by evidence that dreams don't come true all that often. At the center of the story is fallen quarterback Jason Street (Scott Porter), who became a paraplegic after a bad tackle during the opening game of the season. The team's attempts to get second-string quarterback Matt Saracen (Zach Gilford) up to speed are presented in parallel with Street's struggle to transcend his apparent fate as a tragic story that ended on the football field that day. Coach Eric Taylor (Kyle Chandler) is wracked by guilt over Street's injury, but he's forced to push his guys to a state championship at all costs, for the sake of the school and the town, and simply to keep food on the table for his family. The continued presence of Street in the story tells you something about the courageous ambiguity of the show: What other TV show about sports would dare to allow a severely injured former quarterback to linger at the edge of the frame at all times, thereby shedding a nagging light of doubt on the unrelenting thirst for victory on such a small stage?

And what other show would not only take on a conversation between a mother and a daughter about sex, but make it feel honest and nerve-wracking and incredibly charged? After Tami Taylor (Connie Britton), the coach's wife, spots her daughter Julie's boyfriend buying condoms at the drugstore, she tries to have a calm conversation with Julie (Aimee Teegarden), but you can feel her anxiety and she ends up blurting out her worst fears:

Tami: Are you and Matt Saracen having sex?

Julie: No. (Pause.) We're thinking about it.

Julie: Well, I mean, obviously that's why he was buying condoms.

Tami: I see, so you're just buying condoms ... so then when you buy condoms that makes you ready to make love with somebody...

Tami: (Close to tears) Don't do that! Don't you smirk at me right now, I am very upset! You are not allowed to have sex! You're 15 years old!

Julie: I just, I don't see what the big deal is. It's just one body part going into another...

Julie: I'm listening to you.

Tami goes on to warn her daughter, through tears, that if she starts having sex without taking it seriously, she could end up feeling degraded and hardened and cynical -- all of which would surely seem overwrought, if not for the fact that Britton's performance is mesmerizing and hits so close to the bone, you can feel it. For Tami, this isn't about control -- you can see that in the way she speaks to Julie -- it's about her own past. She knows what a messy road her daughter is about to walk down, and it scares her to death.

As with most scenes on "Friday Night Lights," this one feels incredibly immediate and electric. It's one of the only conversations between a parent and a teenager that I've ever seen on TV where the audience isn't clearly supposed to take one side or the other. We're afforded an affecting, complicated snapshot of the relationship: Julie is a good kid who's already decided to have sex and feels that she has the right to; her mom is a good parent who can't stand the thought of it and can't stop from sounding shrill and overbearing because she can't control her emotions on the subject.

But then, every week "Friday Night Lights" features a truly memorable scene, the kind of scene that you can't imagine working on any other drama. The odd, seemingly improvised dialogue and shooting style of the show, which co-executive producer Jeffrey Reiner described to Entertainment Weekly as "no rehearsals, no blocking, just three cameras and we shoot," brings out the intimacy of each scene. The shaky cameras and extreme close-ups that plague so many other shows actually work here, giving us the sense that we're eavesdropping on a heated conversation between strangers. The dialogue has a natural, halting pace, and the camera movement focuses our attention on the weight and meaning of each word. We don't just watch these interactions, we experience them, getting caught up in the misunderstandings and tensions and longings that are uncovered in the process.

The young actors on the show have really grown into its odd style. While Gilford, who plays the earnest, shy quarterback Saracen, seemed to have a natural talent for the aw-shucks qualities of his role from the start, some of the other actors had a shaky beginning -- Minka Kelly, who plays fallen quarterback Street's girlfriend, Lyla, seemed a little false at first, but now she's utterly convincing as the optimistic but sometimes naive romantic. Similarly, Porter has done a great job evoking the anger and confusion of going from star quarterback to outcast overnight. And Gaius Charles has really shined as hot-shot receiver Smash Williams; he's evolved along with his character into a conflicted, sometimes immature kid with good intentions that are sometimes clouded by his huge ego.

Best of all, though, are the interactions between coach Taylor and his wife, Tami. Every scene between the two is lively and flirtatious but also edgy and snippish, perfectly capturing the imperfect, bickering energy of a good marriage, where two people are good friends and depend on each other completely, but aren't afraid to say it when they disagree. When coach Taylor is faced with a tough decision about whether to fire one of his assistant coaches for making ignorant remarks that many interpreted as racist, he goes to his wife, who's the counselor at the high school, for advice. But as he speaks to her, he realizes that he really wants her to back his choice not to fire the guy.

Tami: As a guidance counselor, I gotta say, that, to me, is a fireable offense. What he said.

Eric: All right, let me talk to my wife. Let me talk to the person who cares about me and cares about the team and also has to understand the relevance and the importance to our future of us winning the regional.

Tami: There is nothing more clear to me. Your team is way more important to you than Mac McGill.

Eric: Is there anyone else I can talk to?

The humor and energy in scenes like this one make other dramas seem limp and silly in comparison. Yet, "Friday Night Lights" continues to struggle for good ratings, regularly getting crushed by "American Idol" on Wednesday nights.

But then, marketing-wise, "Friday Night Lights" is in an impossible position. The show appears to be about football, potentially turning off plenty of possible viewers who aren't into sports. And even with those fans, TV shows about sports have a long history of failing miserably. On top of that, the show actually focuses on far heavier and more complicated subject matter -- parenting, adultery, alcoholism, racism -- potentially turning off viewers who are into football. This is the Catch-22 of any narrative that needs to find a wide audience to survive: The more complicated and difficult to describe it is, the more challenging it is to lure in a big enough audience. If the show had a really bad, obvious name like "Tumbletown, TX" and it appeared on the CW, maybe it would be another "Smallville" or "Everwood" -- a modest hit with a clear group of loyal fans. Forget that "Friday Night Lights" is much better than either of those shows. It's a confusing, complex drama that's sort of about football, but sort of not, and that makes it a hard sell. Americans may love football, but they aren't exactly big fans of ambiguity.

If only more people knew what a rare and beautiful thing they're missing: a drama that sets the bar much higher than it has to, daring to take on the romance and heartbreak of being a teenager with honesty, compassion and wit. The writers don't take shortcuts with pointless fisticuffs and cliques and ironic asides; they stick to the emotional center of the story at all times. As a result, over the course of its short season (which ends on Wednesday, April 11 -- well before May sweeps, which isn't a good sign for its survival), "Friday Night Lights" has evolved from a strikingly original, lively little story about a football team to an evocative portrayal of life in a small American town, a narrative with so much sweetness and authenticity to it that, once you abandon yourself to its undeniable charms, you'll find it has the power to make you cringe and grit your teeth and laugh and cry each week, without fail.

How could a show with so much depth and soul possibly get canceled? Sure, it's happened before, but something about the spirit of "Friday Night Lights" makes me hope against hope that this time, the good guys will bring home the trophy. As the Dillon Panthers say at the start of every game, "Clear eyes, full hearts, can't lose!" Let's hope that this time, they're right.