Vicious mail, anti-Mormon slurs, a man-size dolphin and a weeping girl turn the race for the White House into a race to the bottom. 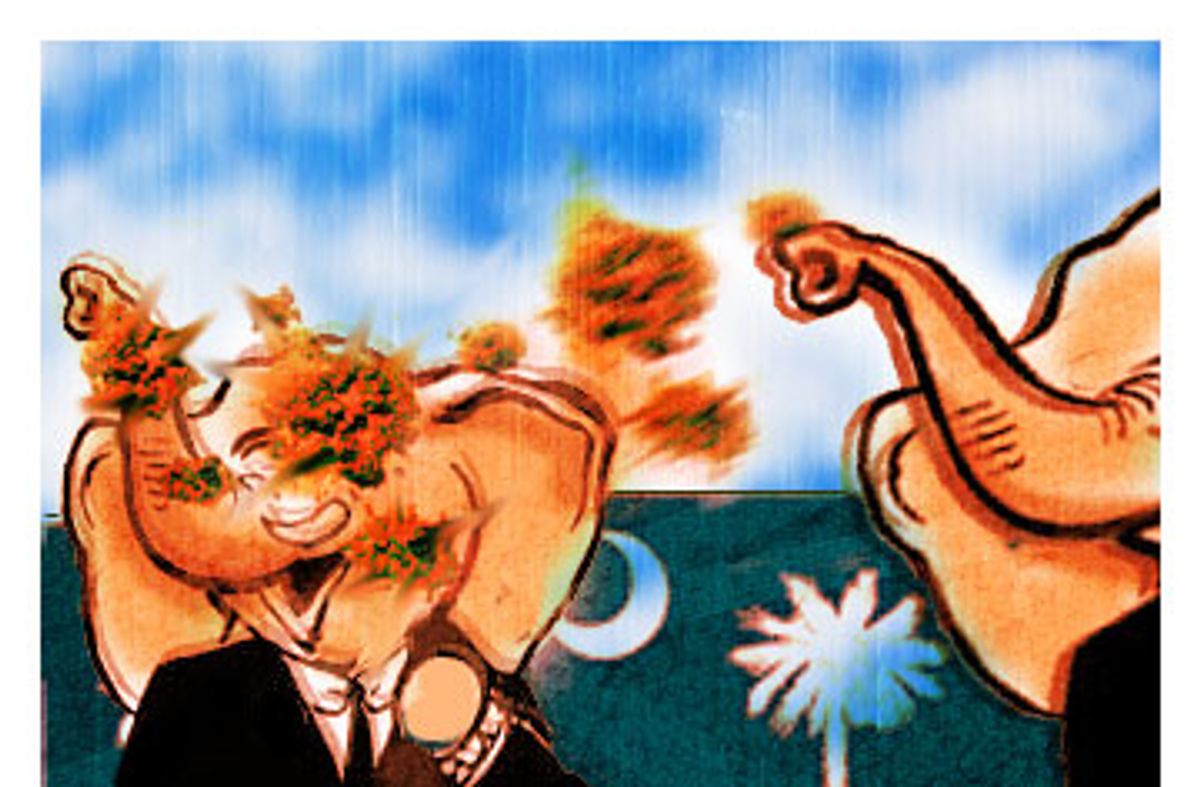 With 10 months left before the first ballot is cast, the Republican presidential primary has begun to get dirty.

Unsigned e-mails have been sent to voters in South Carolina touting "dark suspicions" about Mitt Romney's Mormon faith. Anonymous letters have shown up in mailboxes in the state calling Mike Huckabee a "Huckster" and Romney a "Say Anything" politician. A man-size dolphin, without a name or a face, appeared at a conservative conference in Washington, scoring inches of newsprint by mocking Romney. And at least one campaign has made a young woman cry.

The tensions and the vitriol have appeared far earlier in the presidential cycle than in past elections, and have so far affected Republicans more than Democrats. The anonymous attacks peaked at last week's Spartanburg County Republican straw poll, an entirely unscientific sampling of party activists from South Carolina's textile country. The poll itself was little more than a gimmick to recruit precinct workers. But the proceedings became so chaotic and confrontational that Rick Beltram, the county's GOP chair, is still fuming with frustration. "I actually told three campaigns that I have lost your name on my Rolodex," Beltram said in a phone interview Tuesday. "Some of the national campaigns took this whole straw poll operation way too seriously."

At one point on Thursday night, Beltram said, a staffer for Arizona Sen. John McCain reduced Beltram's 19-year-old daughter to tears when he confronted her as she tried to deliver ballots to another precinct. At another point, a Romney staffer lectured Beltram over the phone, suggesting that logistical problems counting the ballots might have been intentional. A staffer for Kansas Sen. Sam Brownback similarly upset Beltram's wife, when she tried to drive over to another precinct to pick up ballots. "The Brownback person stopped her and said, 'No, you can't go unless you have an escort,'" Beltram said.

That same night, Brownback's national grass-roots coordinator, Jason Jones, yelled out "Flip-Flopper," while Beltram attempted to conduct a live cable interview with Fox News. Jones' disruption, which was first described by the Spartanburg Herald-Journal, appeared to be an attack on Romney, who has been accused of flipping positions on social issues, and to whom many think Beltram is sympathetic. It did not affect the outcome of the otherwise symbolic straw poll. At the final tally, McCain, Rudy Giuliani and California Rep. Duncan Hunter each earned about 25 percent of the vote, with about 12 percent going to Romney and Brownback, and 3 percent going to Huckabee.

But the results mattered less to Beltram than the vicious tactics of the participants, and what they portend for the party of Reagan. One e-mail, sent to party activists under the name "Martin W.," told voters to "trust your instincts" about the Mormon faith because "Mitt Romney has a family secret he doesn't want you to know." The secret, it turned out, was an Associated Press story that described the polygamous relationships of Romney's great-grandfather and great-great-grandfather.

"Unless the Republican Party candidates tighten up their field operations to not beat up on each other, we are going to have a fractured party when the nominating process is over," Beltram said on Tuesday. "I am hoping that by having this conversation and putting these campaigns on notice, we can stop this stuff."

For their part, the presidential campaigns have distanced themselves in public from the anonymous attacks. To date no campaign, individual or group has taken credit for the man in the dolphin costume mocking Romney at a recent conservative conference in Washington, or for the foam "flip-flop" sandals with Romney's picture that were distributed to activists. Both the McCain and the Brownback campaigns denied having anything to do with the anonymous mailers or e-mail that targeted Spartanburg County Republicans. Under federal law, campaigns are required to disclose authorship of direct mail.

But some bad blood remained after the chaotic straw poll, which was disrupted by weather and poor organization. "It is unfortunate that Rick Beltram has chosen to attack the candidates who participated," said Brownback campaign manager Rob Wasinger in an e-mail to Salon. "Senator Brownback is running a positive issue-based campaign." The McCain campaign took a more conciliatory approach. "We appreciate Rick Beltram's hard work," said Adam Temple, McCain's South Carolina spokesman. "It was an intense situation, there may have been misunderstandings, but at this point everything seems to be resolved."

Tensions around the straw poll began the week before the event when a little-known Spartanburg organization, called the South Carolina Veterans Coalition, contacted the local paper to accuse Beltram of being sympathetic to Romney and "stacking the precincts" with his own "operatives." The coalition's president, Don Byrum, described himself as a McCain supporter, though the McCain campaign denied any connection to Byrum or the group. Similarly, Beltram has maintained that he has not endorsed any candidate. Byrum could not be reached for comment.

Both the Romney and Huckabee campaigns tried to spin the negative mailers as a backhanded compliment of sorts, since both candidates are still polling in the single digits. "It is a little surprising for it to be this vicious this early, particularly against a candidate that is arguably in third or fourth place," said Warren Tompkins, who is leading Mitt Romney's South Carolina campaign. Chip Saltzman, who is managing Huckabee's campaign, said he expected the attacks to continue. "This is obviously the first salvo in a long battle," he said. "And we are trying to stay above the fray."

In practice, all of the campaigns are trying to stay above the fray. But for months, several campaigns have sent around private e-mails and conducted off-the-record conversations with national reporters in an effort to smear their rivals. Last month, Gary Marx, the conservative coalitions director for Romney, sent out an e-mail to activists attacking John McCain's record on abortion. Earlier in the month, a Michigan staffer for Romney, Stefani Zimmerman, sent out an e-mail to supporters saying that Brownback had changed his position on abortion. The Brownback campaign reacted angrily, with Wasinger releasing a statement saying, "Mitt Romney's flip flops are enough to make John Kerry blush."

For most longtime presidential watchers, this sort of tit for tat is par for the course. Perhaps the only thing that has changed is the early timing of the attacks. "Looks to me like you have some juvenile delinquents with too much time on their hands," said Van Hipp, a Hunter supporter who once chaired the South Carolina Republican Party.

"Every time we have a presidential election, some of these types of shenanigans can be expected."