Why we should make attorney general an elective office

Like Watergate, the unfolding U.S. attorneys scandal proves that it's dangerous for the nation's chief law enforcement officer to be an appointed crony of the president. 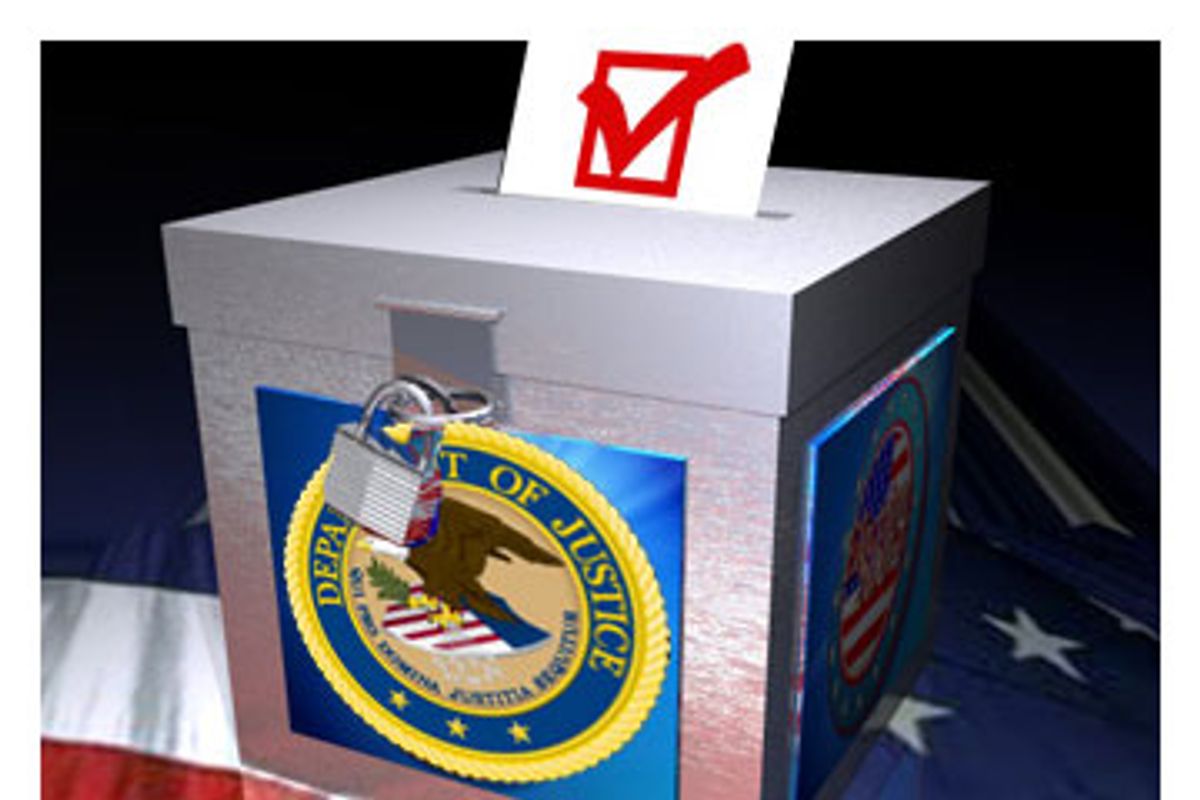 The evolving scandal over the Bush administration's purge of U.S. attorneys around the country has its roots in the most mundane of political sins -- hubris, cronyism and corruption. But it has historical roots as well; to me, it brings to mind a curious moment during the debates in Philadelphia that framed the Constitution. On June 1, 1787, James Wilson of Pennsylvania formally moved that the executive power be placed in a single individual.

The room fell silent, and the silence lasted long enough that the chairman finally asked whether the group wanted to move on to a vote. Only then did Benjamin Franklin speak up and urge his colleagues to discuss the question, and the Constitutional Convention began a long-running debate over the contours of the office that would become the presidency.

Madison's selective and bare-boned "Notes" of the debates provide no explanation for the dead air that greeted the single-executive motion. But it doesn't require a vivid historical imagination to put that awkward pause down to the fact that everyone in the room knew that George Washington, the nation's greatest hero and the presiding officer of the convention, would certainly be the first chief executive under any new system.

With Washington the presumptive beneficiary, nobody would have relished the role of suggesting that the entire executive power should not be lodged in one person. But there were also good reasons to question the single-executive plan. It smacked of the British crown. And so throughout the rest of the convention, the delegates struggled to come up with a plan to dilute the authority the president would hold.

The delegates toyed with surrounding the president with a Council of State, such as some of the states had, to approve major measures. That failed -- to the disgust of Virginia's George Mason, who declined to endorse the Constitution in part because the president would be "generally directed by minions and favorites." In the end, the convention voted to give "advice and consent" power to the Senate, in the hope the Senate would share in, and temper, the president's decision making.

That hope proved illusory. For more than 200 years, the executive branch of our government has been expanding its reach with little interruption. Today, the president commands a vast economic, political, legal, military and national-security apparatus, with no check on his decisions except the often feckless oversight of Congress.

What does all this have to do with the U.S. attorneys scandal? We don't know all the facts yet, but consider how the scandal apparently came to pass. Officials in the White House managed to sneak into the Patriot Act a provision allowing the president to appoint interim U.S. attorneys without congressional confirmation. Republican partisans on the Hill and elsewhere then apparently began to scour the country for those prosecutors whom they deemed insufficiently zealous in criminalizing the Democratic opposition. Soon, the attorney general of the United States -- George Bush's crony -- began to remove these independent figures and replace them with more compliant prosecutors. The result looks a lot like a systematic attempt to corrupt the federal justice system for short-term political gain.

The purge was possible because, under our Constitution, the attorney general is a presidential appointee. The Senate must confirm an attorney general, of course -- but the confirmation of Alberto Gonzales demonstrates that the Senate's use of its "advice and consent" power is often derisory. It has become conventional wisdom that a president has the right to install "his choice" in a position that not only sets legal policy for the United States but also heads the massive federal law-enforcement apparatus.

That's a lot of power to trust to someone whose loyalty is to another elected official. And the history of the past half-century has shown the perils of a politically appointed attorney general. Two of Nixon's attorneys general were convicted of Watergate-related crimes. Edwin Meese, Reagan's attorney general, was assiduous in seeking to impose political conformity on the federal judiciary. Clinton's early Justice Department was compromised by the presence of Webb Hubbell, crony extraordinaire. And Bush's appointees throughout the Department of Justice have been eager to further any hare-brained scheme hatched by the president or by Vice President Cheney.

In that connection, consider the damage done because the DOJ's Office of Legal Counsel came under the control of political appointees. OLC is supposed to be the executive branch's source of disinterested legal advice. When the president wishes to take an unprecedented action, the skilled lawyers at OLC provide him with an opinion as to whether the plan is legal. But in the 9/11 crisis, the office was staffed by political lickspittles, who fell all over themselves advising the president that he could detain and torture anyone he wanted, at any time, regardless of domestic law and international treaties.

Simply put, the office of the attorney general is different in kind from that of, say, secretary of the interior. Most cabinet officials are really extensions of the president. But the nation's chief law-enforcement officer should be more independent.

That's why we should consider making attorney general an elective position. Forty-three states have elected attorneys general; in two others, the AG is named by either the legislature or the courts. Only five states have a system of gubernatorial appointment.

The candidates for attorney general could run for office during midterm elections rather than in presidential years. This would ensure an election that would be more about the candidates themselves than the strength of presidential coattails.

And the next time a White House advisor wanted to oust prosecutors for partisan aims, or secure a legal-sounding blank check for lawless executive action, he or she would have to call across town to an attorney general who had an independent constitutional role and who could not be fired for refusing to toe the administration line. The lawyers at OLC would be appointed by the attorney general and would not be toadies of the president; their responsibility would be, as it should be, to the integrity of the law and the Constitution. Does anyone believe that such lawyers would have given the go-ahead to the NSA warrantless surveillance program?

This idea seems almost bizarre to people used to the current federal setup. But as I said above, the states have used it for years. It's not without its drawbacks. After all, elected AGs are politicians, with their own agendas. Sometimes that's great -- think of the determined crusade of Eliot Spitzer of New York to clean up corporate governance. Sometimes it's bad -- think of Phill Kline, the Kansas attorney general who seized the medical records of women who had abortions and later discussed them with Bill O'Reilly on television.

But appointed attorneys general are politicians too. It's just that they only have to cater to an electorate of one. Popular election would place accountability in the hands of the people. Kline paid for his bad behavior with a landslide defeat by Kansas voters last fall. Spitzer was rewarded for his good behavior with the governorship of New York. And if an elected AG gets up to mischief, he or she would be aware that officials of the executive branch were nearby to monitor the Justice Department.

Would this also dilute the president's authority, in the way some of the founders in Philadelphia were hoping to do two centuries ago? In a word, yes. It would make it harder for presidents to take impulsive or secretive legal action. The true question for a student of the Constitution is, why would that be a bad thing? Checks on power are what the Constitution is about. The framers saw the Congress as a check on the president, the courts as a check on the Congress -- and even the House and Senate as checks on each other. The idea was to ensure that government used its huge powers only after deliberation, and not in the service of individual agendas.

"Ambition must be made to counteract ambition," Madison wrote in his brilliant "Federalist No. 51." "In framing a government which is to be administered by men over men, the great difficulty lies in this: you must first enable the government to control the governed; and it in the next place oblige it to control itself."

Though they tried, the framers did not create a system that fully obliges the executive to control itself. As a result, our freedoms are in danger from politicization of federal power. We can most clearly show respect to the framers by helping perfect the structure they designed. An elected attorney general would be an important new check, one in keeping with the best of the system we have.