This sweet, but not cloying, adaptation of Jhumpa Lahiri's delicate novel brings us some wonderful moments. 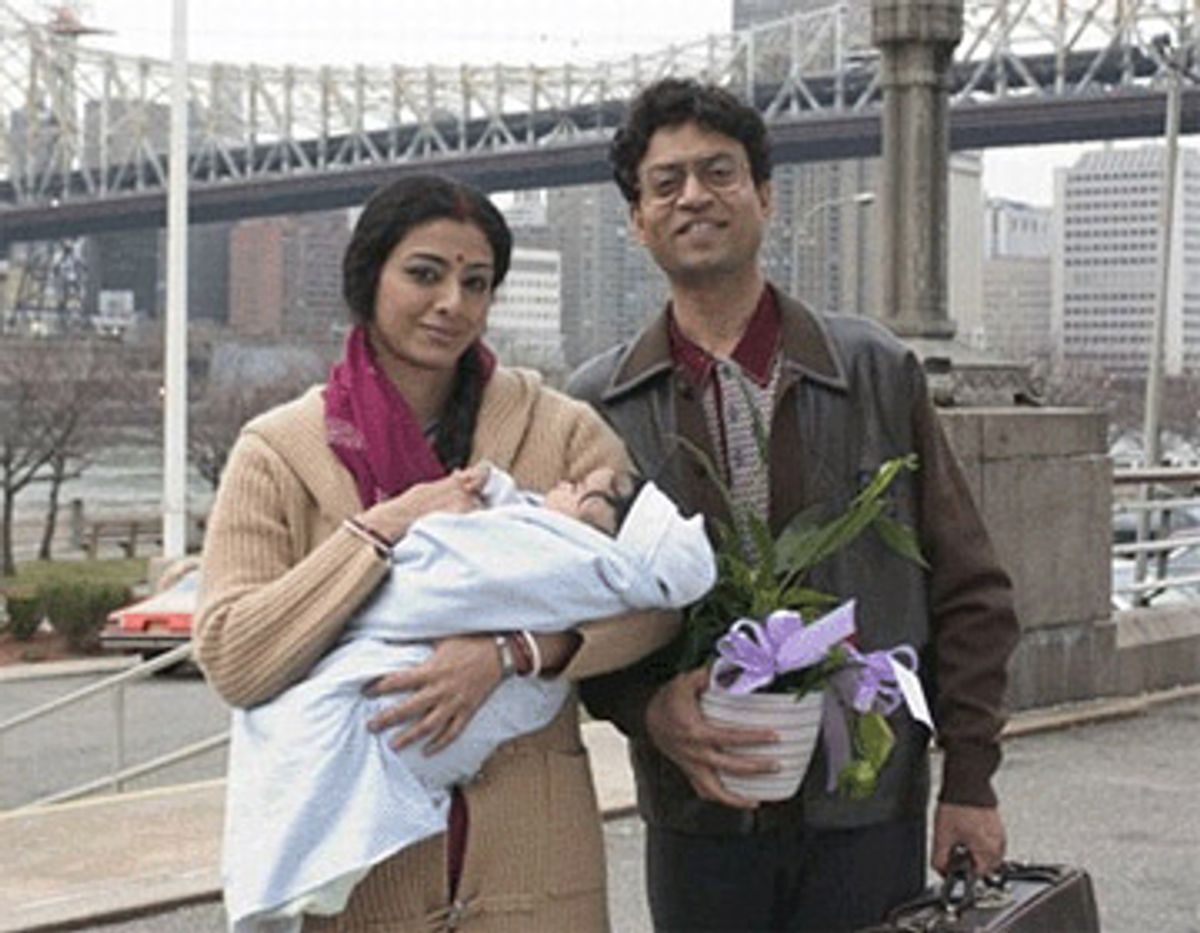 You wouldn't envy any filmmaker entrusted with the task of adapting a novel as delicate as "The Namesake." In Jhumpa Lahiri's book, which opens in the late '60s, a young Bengali couple, Ashoke and Ashima Ganguli, move to Cambridge, Mass., to start a new life and a family. When their son is born, they don't have a name for him -- the name is to be chosen by Ashima's elderly grandmother in India, and the letter has somehow gone astray -- and so, spontaneously, they decide to call him Gogol, a name that has special significance for Ashoke, enamored as he is of the great Russian writers. Gogol will be his pet name, the one used at home by his family; Ashoke and Ashima will know his "good" name -- the name by which he'll be known in the outside world -- when that letter finally arrives.

But it never does, and so Gogol keeps his makeshift name, one that begins to bother him as he reaches adolescence: It represents all his conflicted feelings about who he is and where he's come from.

All of memory, and all of life, is made up of mundane details, and the novelist's job -- as well as the filmmaker's -- is to sift through and find just the right ones. In her adaptation of "The Namesake," Mira Nair hits it right at least half the time. In places, the movie feels aimless and misshapen; it doesn't have the gentle but focused energy of Lahiri's book. And sometimes Nair goes overboard in heightening the cultural contrasts -- the inevitable incongruities between East and West -- that Lahiri navigates so subtly.

Even so, Nair (whose previous movie was the 2004 "Vanity Fair") manages to infuse the movie with not-too-cloying sweetness, perhaps partly because she knows when to back off and allow her two older actors -- Irrfan Khan, as Ashoke, and the Bollywood star Tabu, who plays Ashima -- to carry the movie. Their scenes together (and luckily they have many of them) are so lovely, and so deeply believable, that the movie's other flaws momentarily melt away.

The movie version of "The Namesake" -- the script is by Sooni Taraporevala -- opens in India, first with a flashback, and then with the arrangement of Ashima and Ashoke's marriage: Ashoke and his family have been invited to Ashima's house, where the prospective bride and groom will meet for the first time. Before Ashima, a nicely mannered young girl with an interest in singing, even meets Ashoke, she sees his shoes in the hallway -- they're two-tone wingtips unlike anything she's seen before. The label inside these exotic oxfords reads (a bit too clearly, given that the shoes are so worn) "Made in U.S.A." She impulsively slips her feet into them, as if trying a new life on for size, a detail drawn straight from Lahiri's book.

Nair has moved the story's early setting from 1960s Cambridge to 1980s New York, specifically Queens, and we see Ashoke -- a bespectacled professor who must have looked middle-aged even as a teenager -- explaining the intricacies of a subway map to his timid and bewildered wife, or offering to make her a cup of tea. Ashoke and Ashima eventually have two children, Gogol and Sonia (from adolescence to adulthood, they're played by Kal Penn and Sahira Nair), who grow up to be so-called typical American kids, even as their parents unthinkingly cling to many of the old ways: We see Gogol and Sonia plopping down to eat at the family's kitchen table, with knife and fork, while Ashoke still scoops up rice with his fingers.

Gogol doesn't exactly reject his family, but he gradually distances himself, becoming engrossed in the new life he's found with his sophisticated, upper-class American girlfriend, Maxine (Jacinda Barrett). Gogol's confusion and frustration are the cornerstone of Lahiri's book -- and the focus of Nair's movie, too: The problem is that Penn isn't, at least not yet, a graceful enough actor to carry so much dramatic weight. Penn is wonderful in the picture he's best known for, the 2004 "Harold and Kumar Go to White Castle" (a pleasurable stoner comedy that speaks volumes about race in America, specifically for what it doesn't say). Penn is an extremely likable actor, but he clamps down on the character of Gogol a bit too hard; Gogol's internal conflicts come out a little too aggressively in Penn's line readings and not enough in his gestures, his expression. This is a performance that's almost there, but not quite.

It also suffers in comparison with those of Khan and, especially, Tabu. Nair's approach is sometimes too heavy-handed in "The Namesake": For example, she has Maxine show up at an Indian memorial service in a dressy black tank top, while everyone else is covered up with sleeves and saris. Clueless as Americans can be, a character like Maxine would certainly know that you don't wear a tank top, even a nice one, to a funeral, but Nair seems to have added this detail to enhance the distinction between Maxine's world and Gogol's, and the extra hammering isn't necessary.

But Nair clearly feels at ease with Tabu and Khan. Their scenes are the ones that breathe most naturally; their grace feels unforced and unrehearsed. Nair shows us the newlywed couple in bed together, modestly clothed, and suggests, without overstatement, that the tentativeness with which they respond to each other's touch has more to do with passion than with restraint. In a later scene, Ashima teases Ashoke when he offers a thinly veiled expression of his love for her. She asks him, flirtatiously, if he wants her to say in response "I love you," as American couples do.

Khan plays Ashoke not as a bumbler but as a shy, thoughtful person who takes satisfaction and pleasure in having built a good life for himself and his family; Khan gets subtleties like that across with just a glance, or a small half-smile. And Tabu -- a great beauty with deeply expressive eyes and a smile capable of betraying a little sadness in the corners -- plays Ashima as a woman who's frustrated and slightly heartbroken by her wayward son's indifference. Yet her children aren't everything to her. The movie version of "The Namesake" -- like the book it's based on -- isn't just about the bond between parents and children, but about that between husbands and wives. Ashima and Ashoke barely touch in "The Namesake." But their romance -- one that, like real-life romance, includes all kinds of suffering, joy and petty annoyances -- ends up being both the backbone and the heart of the movie.