Our right-wing arbiters of masculinity

Even a casual examination of the individuals who impugn the masculinity of Democrats and liberals virtually always reveals what truly motivates that behavior.

On Thursday, The Wall St. Journal's James Taranto -- in an item he entitled "Always a Woman to Me" -- followed in Ann Coulter's footsteps by very cleverly noting that "at least one prominent feminist . . . has been won over by John Edwards's womanly charms" (emphasis added). The whole Taranto item makes cute little references to how very womanly John Edwards is, and Taranto ended this way:


Doubtless America will one day have a female president. But our guess is it'll be someone whose appeal transcends sex--who tries to win votes not from women qua women but from men and women qua citizens. So far that would seem to exclude both Mrs. Clinton and John Edwards.

Taranto also takes particular glee in showing what a tough guy he is by mocking combat veterans like Max Cleland because -- unlike the chest-beasting, super-brave Taranto -- Cleland actually finds war to be trauamatizing and horrible.

In this case, Taranto was launching his fun femininity attacks on Edwards based on a New York Sun article that asked in its headlines: "Could Edwards Become First Woman President?" That, in turn, led Rush Limbaugh to tout the article and repeatedly impugn Edwards' masculinity, refer to him as "the Breck Girl," etc. Limbaugh's website containing that monologue is accompanied by this photograph: 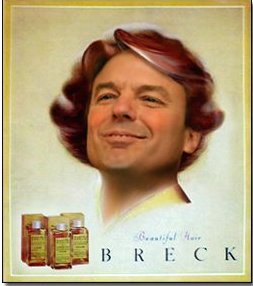 Rush, of course, is the person whom that Beacon of Civility and Decency, National Review's Kate O'Beirne, hailed for "his good judgment, his unerring decency." Is it time yet to hear some more about how fringe and unrepresentative of conservatism Ann Coulter is? I'm going to periodically chronicle this psychologically twisted tactic used continuously by the Bush-following right-wing movement because, as I documented several days ago, this mentality lies at the heart of what they do, which is why the leading purveyor of that tactic, Ann Coulter, will never be shunned.

In connection with that post I wrote, it is critical to keep in mind why so many right-wing followers have this compulsive need to feminize Democrats and liberals while (both explicitly and by effect) masculinizing themselves. It is virtually always revealing, whenever this pathetic feminizing tactic is used, to examine the individuals who are using it. In virtually every case, the motivation behind this tactic -- the personal need that it fulfills -- becomes painfully obvious. It is always about the Feminizer, never about the target.

This, for instance, is James Taranto, the Arbiter of American Masculinity -- the Ridiculer of John Edwards' lack of manliness and Max Cleland's lack of toughness: 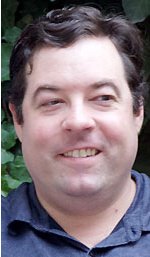 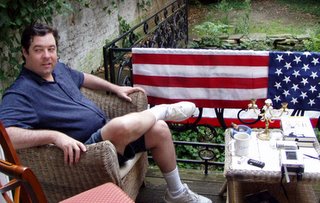 The awe-inspiring toughness and towering masculinity of James Taranto is also on display here.

Here is the other Standard-Bearer of Tough, Aggressive, Right-Wing Masculinity who finds John Edwards to be so soft and girly: 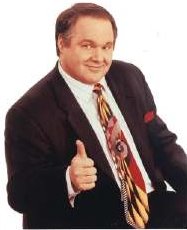 Search the ranks of the right-wing bloggers and various right-wing talk radio hosts for those who have been most giddy about rolling around in this "John-Edwards-is-a-Girl" filth and you will find much of the same thing, and far worse still.

We ought to have political discourse that is free of these sorts of adolescent, psychologically warped personal smears. But we don't. The right-wing political movement that has dominated the country for the last six years (at least) thrives on them. It is their nourishment. And since that is so, since they insist on injecting these sorts of themes into our political dialogue, one is compelled to ask what the real meaning and motivation of that is. It just is hard -- perhaps impossible -- to avoid noticing that those most obsessed with these themes of "masculinity" and "toughness" in our political culture are so plainly driven by their own personal situations when infecting our political system with these depraved messages.

UPDATE: The official Richard Nixon library has recently posted on its site an article by the totally-fringe-and-unrepresentative- Ann-Coulter-whom-the-conservative-movement-repudiates. The title of the article is The Democratic Party: A Vast Sleeper Cell, and this is the first line: "Fortunately for liberals, the Iraqis executed Saddam Hussein the exact same week that former President Ford died, so it didn't seem strange that Nancy Pelosi's flag was at half-staff" (h/t reader HM).

The article then goes on in one paragraph after the next describing how liberals are always on the side of America's enemies but, by contrast, Richard Nixon was popular with "normal Americans." Someone forgot to tell the Nixon Library that Ann Coulter has nothing to do with the conservative movement.

This is how a large chunk of political conflicts are resolved and where many people form their political impressions -- with all of these cultural and psychological themes predominating, not lofty political discussions. While it might be personally satisfying to declare that you will remain above such matters (as commenters often do here whenever these issues are raised), ignoring such things only allows the filth purveyors to succeed unchallenged, as I'm certain John Kerry would be happy to explain to anyone willing to listen.